This week we're launching the first-ever edition of Sensor Tower's monthly Apple App Store non-gaming leader charts, based on the popularity of our ongoing iOS Gaming Leaders series. In this post, you'll learn about November 2015's top non-gaming apps by downloads, revenue, and fastest growth, with charts built using our industry-leading Store Intelligence estimates along with our expert analysis.

Keep reading to discover which apps topped the charts both in the U.S. and worldwide.

Sensor Tower users who keep an eye on Top Charts & Leaders won't be surprised to see Facebook's Messenger at the top of both U.S. and worldwide download charts—it's held that spot almost since its release. In fact, many of the apps that comprise the U.S. top 10 haven't changed rank significantly from last month, but that's not to say there weren't a couple of apps making sizable moves in November.

The biggest mover was Acapella from PicPlayPost, an acapella music video editor initially launched by publisher Mixcord in September. The app was ranked No. 212 in terms of estimated U.S. downloads in October, but it surged in November, climbing 209 spots and becoming the third most downloaded overall (it even managed to chart at No. 10 worldwide). You can see its corresponding performance on the U.S. App Store's category rankings for all free apps on iPhone and iPad during November below, in a chart based on our App Intelligence ranking history data: 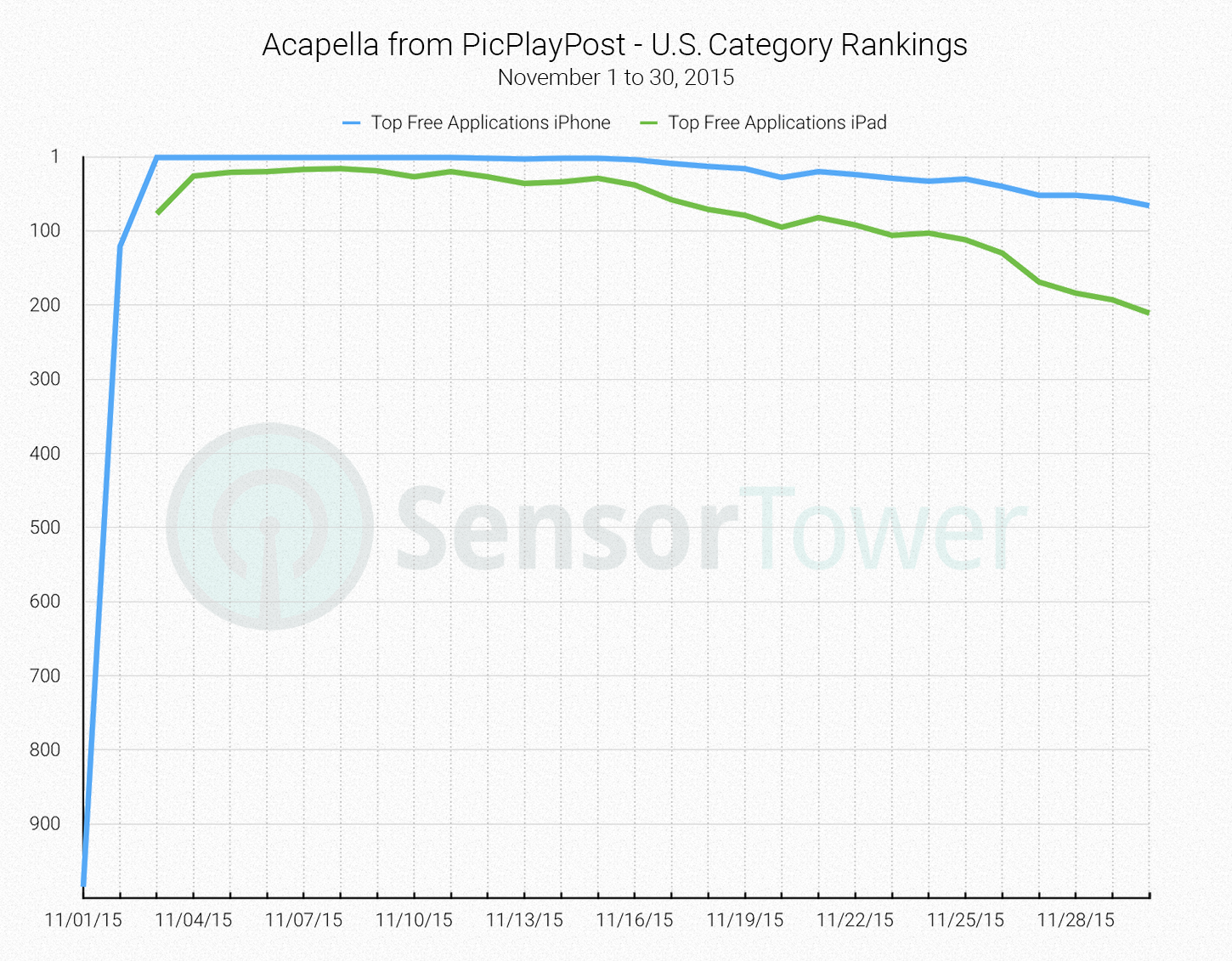 While it didn't experience quite the meteoric rise as Acapella, the month-over-month increase in downloads for Amazon's flagship shopping app between October and November was significant enough to boost it 10 places to No. 9 overall for U.S. downloads. This was no doubt spurred by the traditional November kickoff of the holiday shopping season, as we previously analyzed in our look at Black Friday's effect on iOS shopping app downloads. There, the Amazon app was the clear leader in terms of year-over-year growth, with downloads on the busiest U.S. shopping day of the year up 242 percent YoY.

Looking at all App Store territories, the big winner on the downloads front last month was China's iQIYI, a video streaming app originally launched in fall 2010. It grew by 139 percent between October and November, from 4.3 million downloads to more than 10.3 million. This translated into a No. 5 ranking on our top worldwide downloads chart, where it had ranked No. 16 the month prior.

Three of the top 10 highest grossing apps for November both domestically and worldwide were dating-focused, while five were media streaming—either music or video. Spotify was solidly atop both charts, outgrossing second-place Pandora by more than $5 million in the U.S. and more than $12 million worldwide.

Tinder placed fifth on both charts as the revenue leader in dating apps, generating more than $2.7 million in the U.S. and more than $4.6 million worldwide.

Netflix was the real standout for November, however, nearly doubling its revenue from in-app purchases in the U.S. over October and growing it by more than 50 percent worldwide in the same period. This comes on the heels of the company enabling users to subscribe to its service from within its iOS app in September, and introducing a variety of subscription levels in the subsequent weeks.

To contrast, Netflix's U.S. IAP revenue for October 2015 was approximately $715,000, and this number climbed to approximately $1.8 million last month. Worldwide, its monthly revenue rose from about $990,000 to about $2.7 million over the same period. This translated to its app climbing 12 spots and entering the worldwide top revenue chart at No. 7 in November.

Note: The revenue estimates displayed on our charts are net amounts, i.e., the amount paid to publishers by Apple after its 30 percent portion of their revenue has been deducted.

Having ranked No. 3 overall in terms of U.S. downloads, Acapella from PicPlayPost was also the fastest growing app in terms of month-over-month downloads between October and November in the U.S., growing by more than 28,000 percent during the period. Media making apps Cinepic and Giffage also witnessed impressive growth, with Condé Nast's Thanksgiving: A Bon Appétit Manual no doubt receiving a surge in downloads courtesy of the U.S. holiday.

Both worldwide and domestically, it was Stockholm, Sweden-based Toca Boca AB that made the biggest single-company impact on the fastest growing chart with three titles represented.

We've worked to ensure that our first-ever iOS non-gaming app charts are as useful as possible, but, just as with app marketing, they're ever-evolving. Let us hear your feedback by tweeting @SensorTower or emailing randy@sensortower.com.