Downloads of apps backed by top venture capital firms exceeded 265 million on the U.S. App Store last year, according to Sensor Tower estimates. In this report, we rank the top 20 VC firms in mobile by the 2015 performance of their app portfolios, utilizing download estimates from our Store Intelligence platform. In addition, we examine the category breakdown of apps invested in by the VCs studied, as based on the top 1,000 most installed iOS apps for last year.

To create this report, Sensor Tower's mobile insights team analyzed the top 1,000 most downloaded iPhone and iPad apps on the U.S. App Store for the period of January 1 through December 31, 2015. Expanding on prior research by CB Insights, we defined a group of more than 30 venture capital firms with substantial active investments in the mobile apps space (exits are not included), then analyzed the performance of their apps that ranked in the top 1,000 for downloads last year. We used the combined estimated downloads for each VC firm's apps to produce the following ranking.

The Top VCs in Mobile 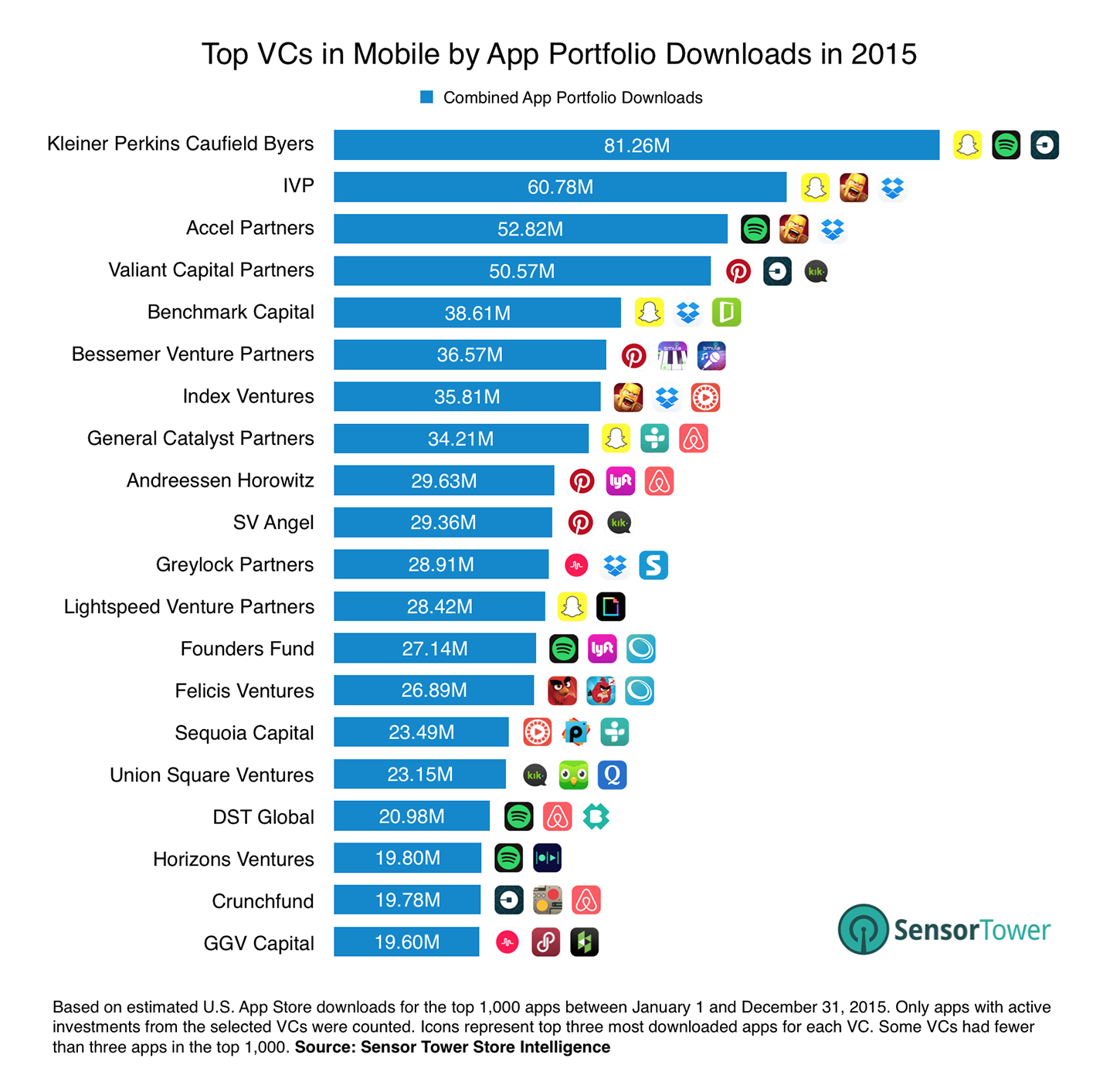 Kleiner Perkins Caufield Byers (KPCB) ranked first in terms of its app portfolio performance in the top 1,000 for installs last year. KPCB holds active investments in 13 of the top 1,000 apps, including: Snapchat, Spotify, Flipagram, Duolingo, Text Free, Shopkick, Houzz, Airbnb, Nextplus, Flipboard, Pinger Textfree, and Up by Jawbone. These apps accounted for an estimated 81.26 million downloads on the U.S. App Store in 2015.

Rounding out the top three, Accel Partners had 12 top 1,000 apps, with their combined estimated downloads totaling 52.82 million for the year. Its top performing app was Spotify with more than 17.8 million estimated downloads in the U.S. during 2015.

App Categories and Most Funded Apps of the Top VCs

In addition to producing the ranking above, we analyzed the App Store categories associated with the app portfolios of all the firms included in our study. The chart below breaks down the category focus of the top five firms' apps in the top 1,000. 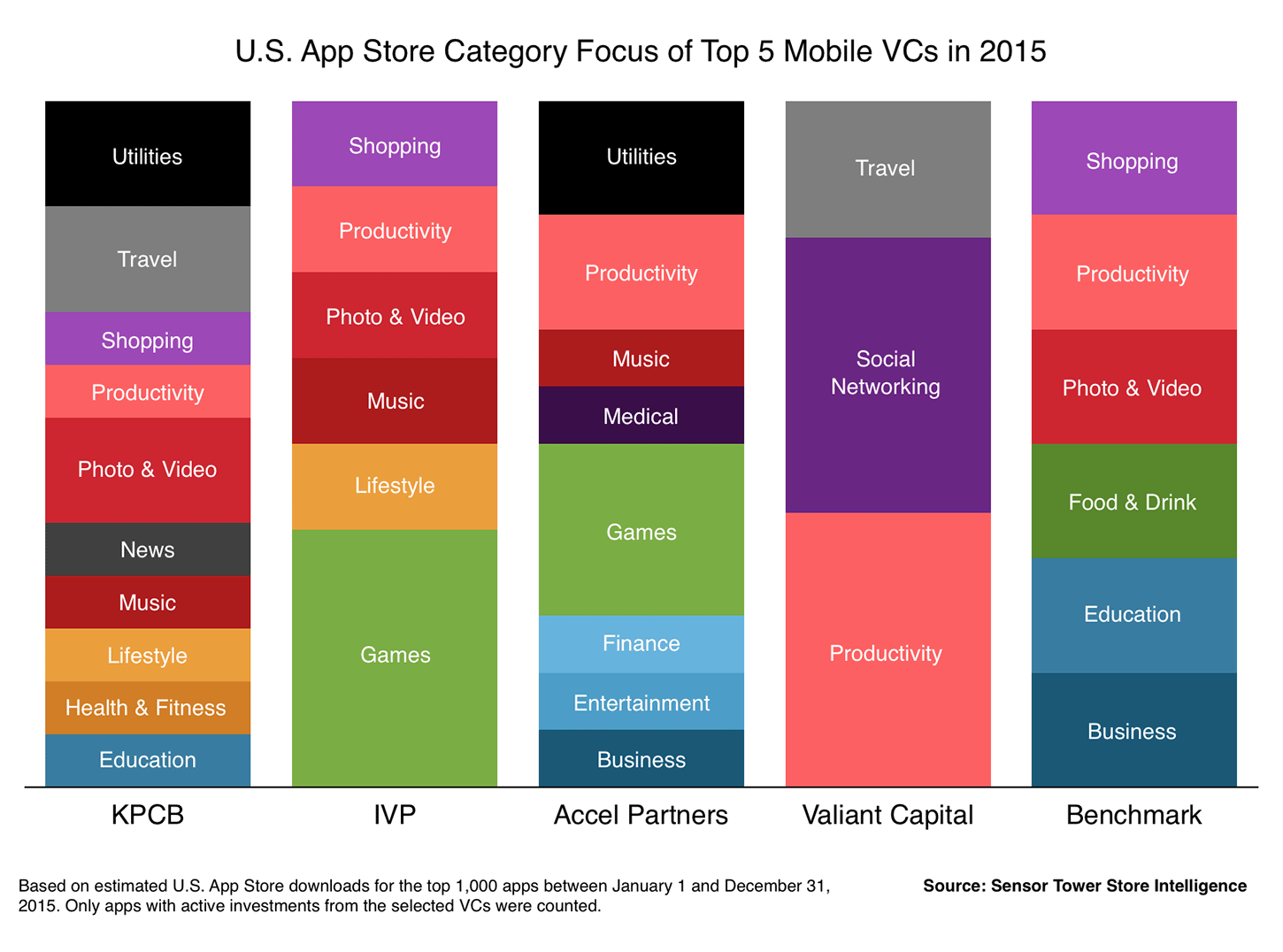 In all, 17 of the App Store's 23 categories had VC funded apps in the top 1,000 last year. The six categories without any qualifying apps funded by the top 20 firms we analyzed were: Books, Catalogs, Navigation, Reference, Sports, and Weather.

Games had the most apps in this group by a wide margin with 21, including the likes of the aforementioned Supercell titles, Angry Birds 2 from Rovio, QuizUp! from Plain Vanilla, and Two Dots from Playdots. Social Networking and Music both had eight apps in our range, making them the second most represented categories overall. At No. 3 was Photo & Video with six apps total.

In terms of per-app investments from our group of VC firms, Airbnb had the most with 10. Seven of the firms in our analysis invested in Dropbox, placing it at No. 2 by this metric, while Uber and Lookout were tied at No. 3 with six investments each.

All told, 85 of the top 1,000 apps on the U.S. App Store last year were funded by the firms we analyzed, accounting for slightly more than 265 million total installs.