The top 1 percent of publishers across the App Store and Google Play accounted for nearly 79 percent of new worldwide installs in the first half of 2022, Sensor Tower Store Intelligence reveals. Although these top publishers still represent the majority of downloads and revenue, the mobile market has increasingly become more democratized. The top 1 percent’s market share has shrunk over the last three years, reaching the lowest ever since 2019 in 1H 2022.

Among the top publishers, Meta and Google each saw more than 1 billion worldwide downloads in the first half of 2022, a 92 percent difference from the third top publisher. This difference in downloads illustrates the outsized influence that top performing publishers have on the app market, despite its gradual democratization. 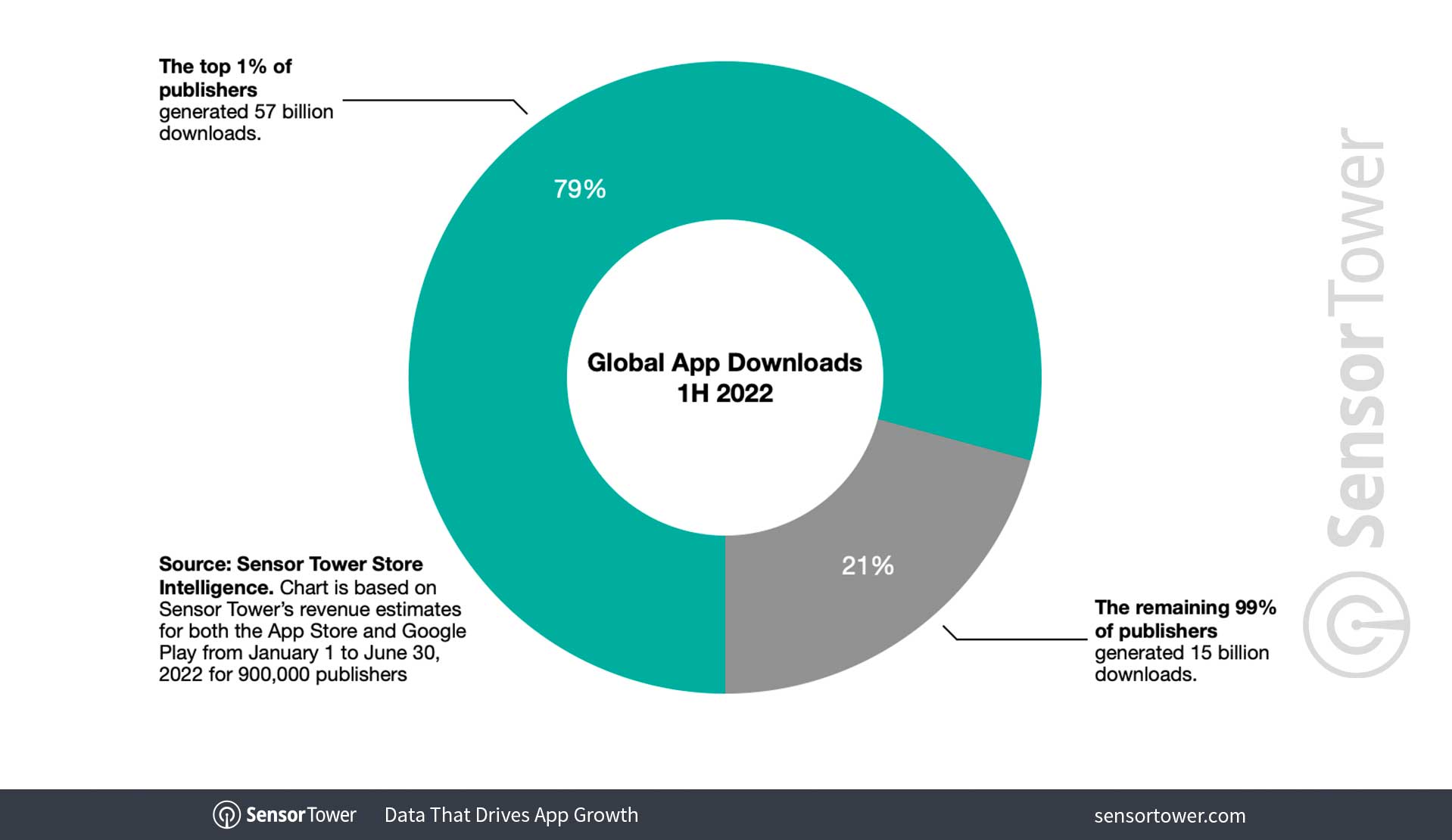 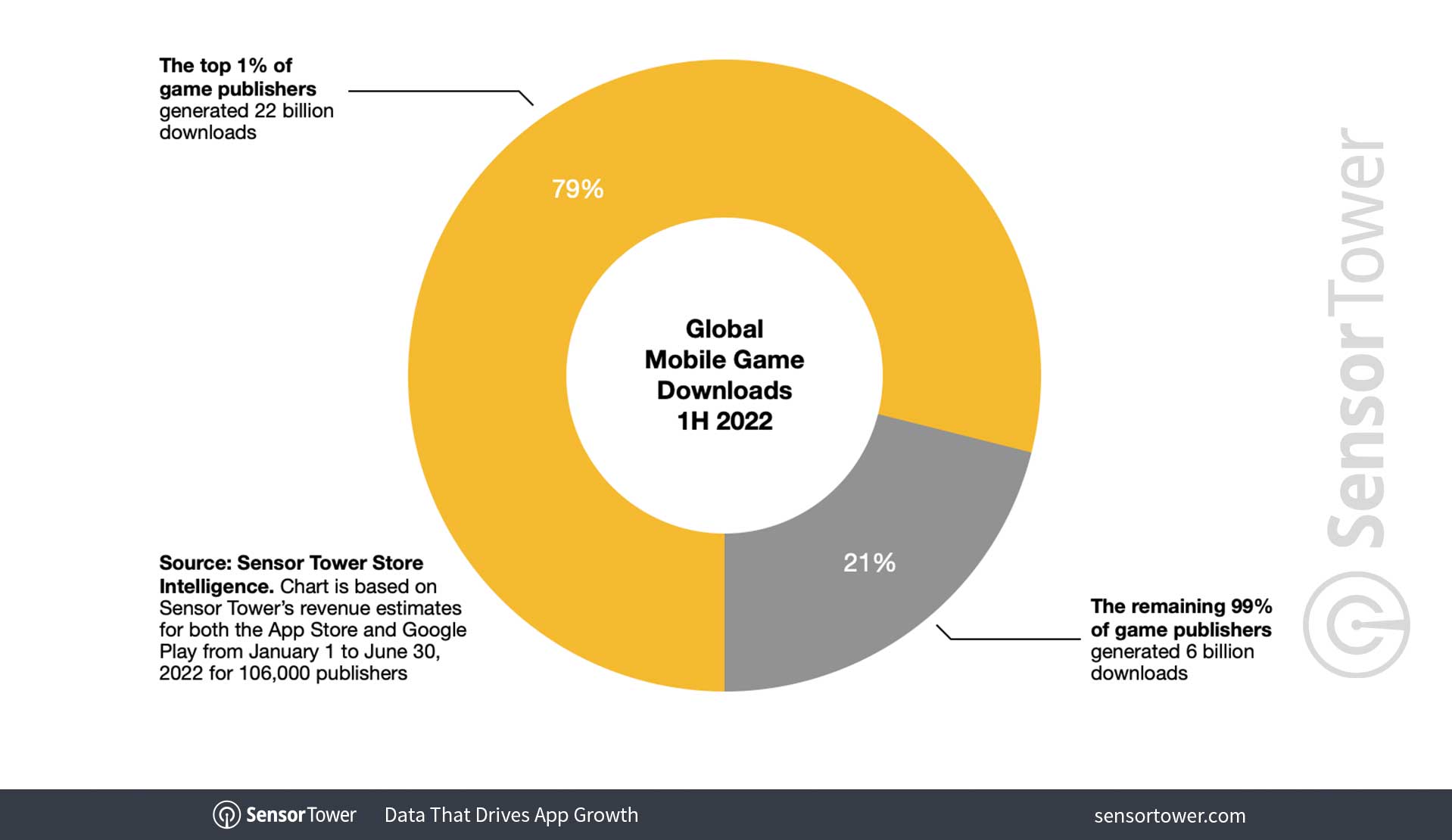 Top 1 Percent by Revenue: All Apps

Analyzing revenue widens the gap even more between the top 1 percent of publishers and the rest of the cohort. In the first half of 2022, the top 1,800 publishers collectively held 91 percent market share of overall revenue, or approximately $42 billion. The remaining 183,000 publishers shared 9 percent of market share, or $4 billion.

Among both game and non-game publishers, Tencent was the top grosser with approximately $3.3 billion revenue generated in the first half of 2022. This was 153 percent more than the second-highest performing publisher, ByteDance, which generated $1.3 billion. With a portfolio that includes perennial chart toppers such as Honor of Kings and PUBG Mobile, including the Chinese localization Game for Peace/Peacekeeper Elite, Tencent alone generated more than 7 percent of worldwide consumer spending in apps during 1H22. 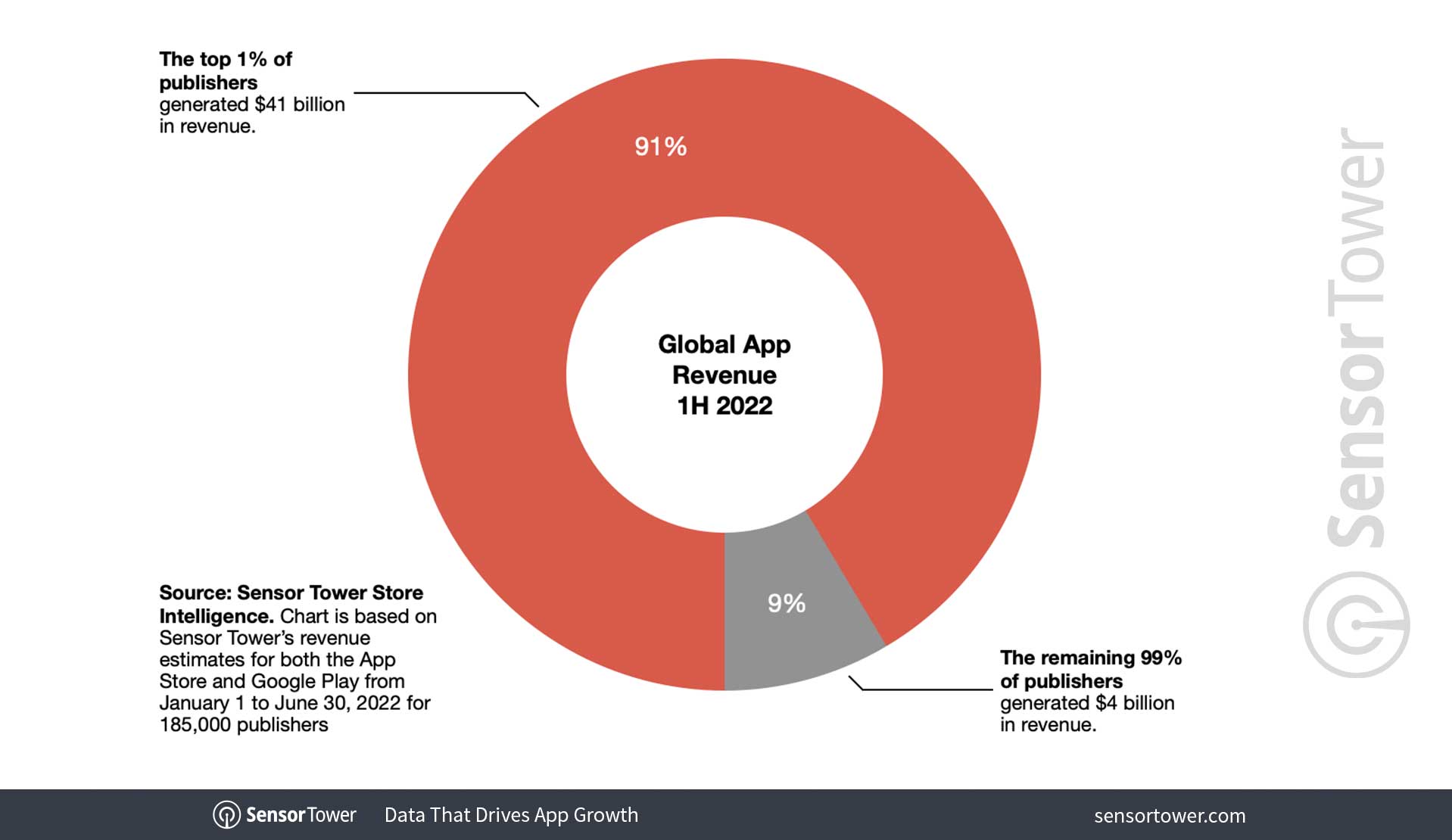 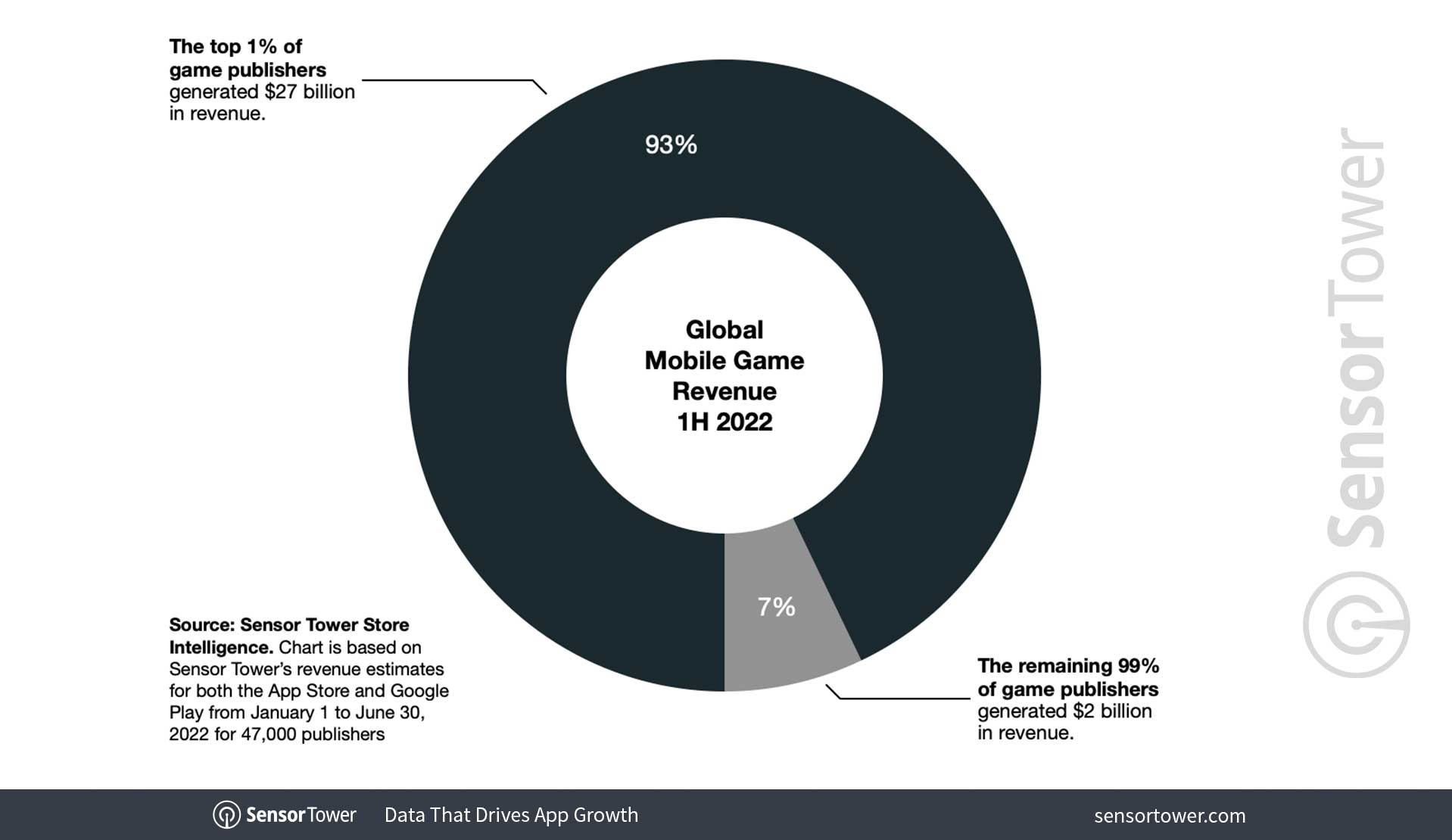 Top 1 Percent Over the Years

The decline in the top publisher shares is reflected in a decline in monthly active users as well. From Sensor Tower’s Usage Intelligence data, apps from top publishers such as Facebook and YouTube saw 0 percent and -1 percent in MAU growth Q/Q in Q2 2022, respectively. 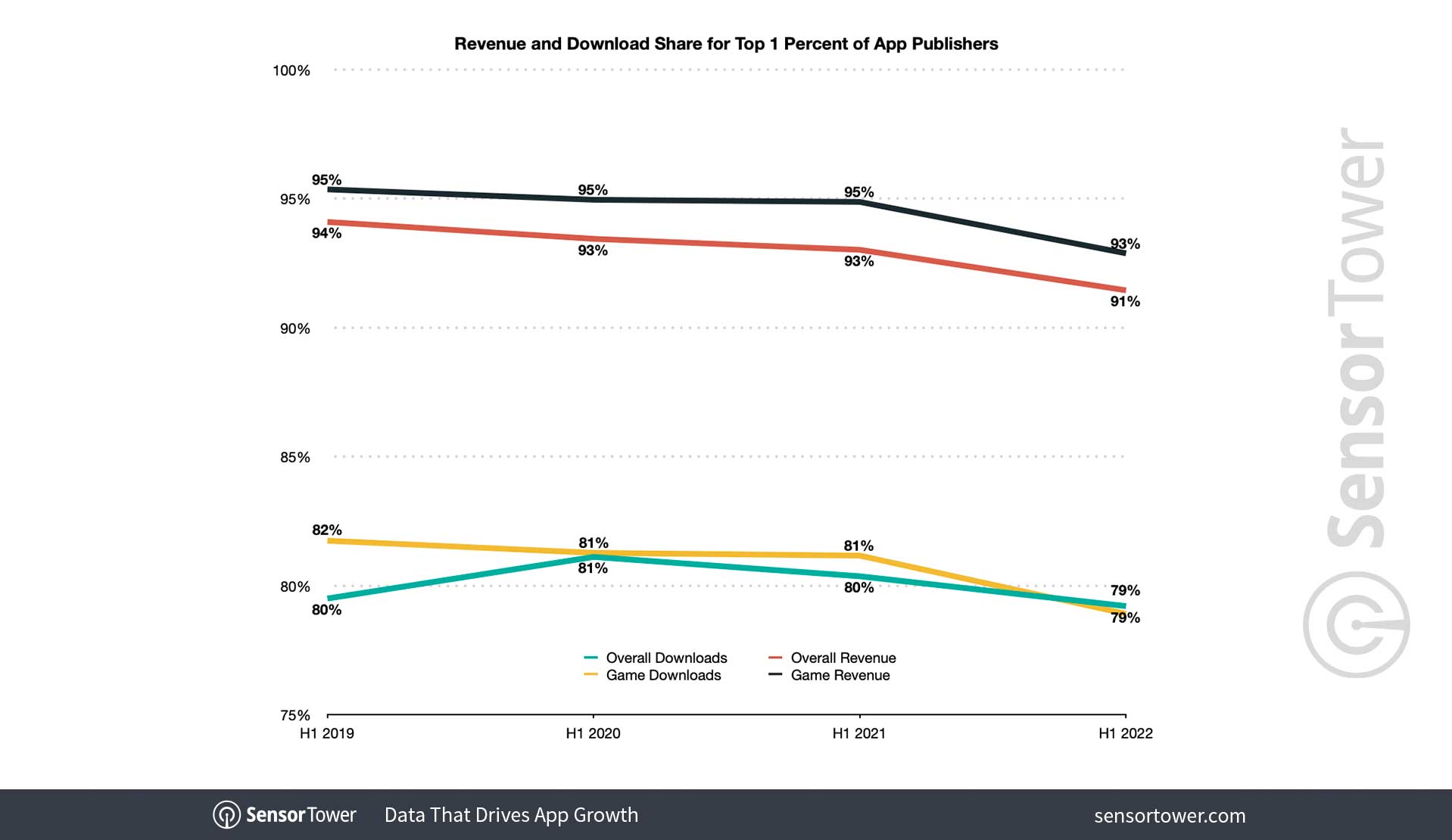 Global mobile app adoption and consumer spending were down in the first half of 2022, spurring top publishers to try to capture new audiences in different markets. In addition to international expansions, publishers such as Netflix and ByteDance have opted to foray into the gaming space. Time will tell if these experiments will pay off—in the meantime, although newcomers have by no means dethroned the major platforms, they are succeeding in establishing their own audiences.

With the combination of expanding marketing strategies and a decline in overall mobile users since the height of the pandemic, the top publishers are likely to maintain their place at the top of the food chain. Even so, our data points to growing opportunities for apps outside their elite ranks to claim a larger piece of the market than was possible just a few years ago.

About This Data: For this analysis, we looked at the estimated worldwide download and revenue totals of all publishers with apps ranking on the App Store and Google Play during Q1 and Q2 periods from 2019 to 2022.