Utilizing Sensor Tower’s Game Taxonomy and Game Intelligence products, which segments games into relevant genres and subgenres to support publishers in efficiently identifying key trends, we analyzed the Puzzle genre to see how it has performed over the last year and gain insights into which of its 11 subcategories has proven the most lucrative and installed.

Top Titles by Revenue and Downloads

The top Puzzle game by player spending in the U.S. between April 1, 2021 and March 31, 2022 was Candy Crush Saga from King, which is part of the Classic Match 3 subgenre and generated $845.5 million. The No. 2 and No. 3 grossing Puzzle titles were Homescapes from Playrix, part of the Puzzle & Decorate subgenre, and Candy Crush Soda Saga, also from King, respectively. 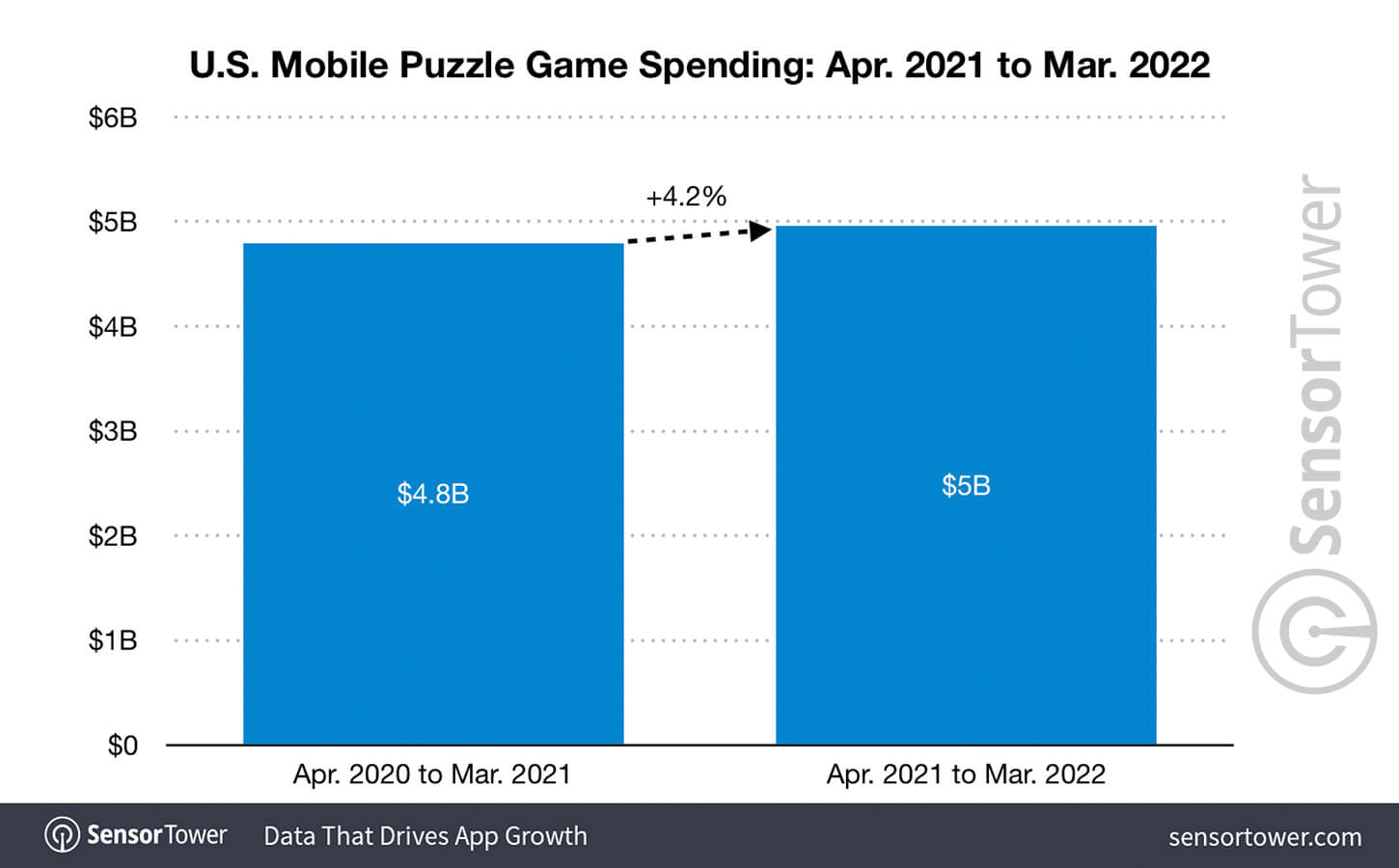 When it comes to downloads, the Puzzle genre picked up approximately 554 million installs during the last year, a decrease of close to 20 percent Y/Y. The decrease follows a bump in installs in 2020, sparked by the global COVID-19 pandemic and lockdowns. For comparison, installs during the period of April 1, 2020 to March 31, 2021 were up approximately 5 percent from the year prior. 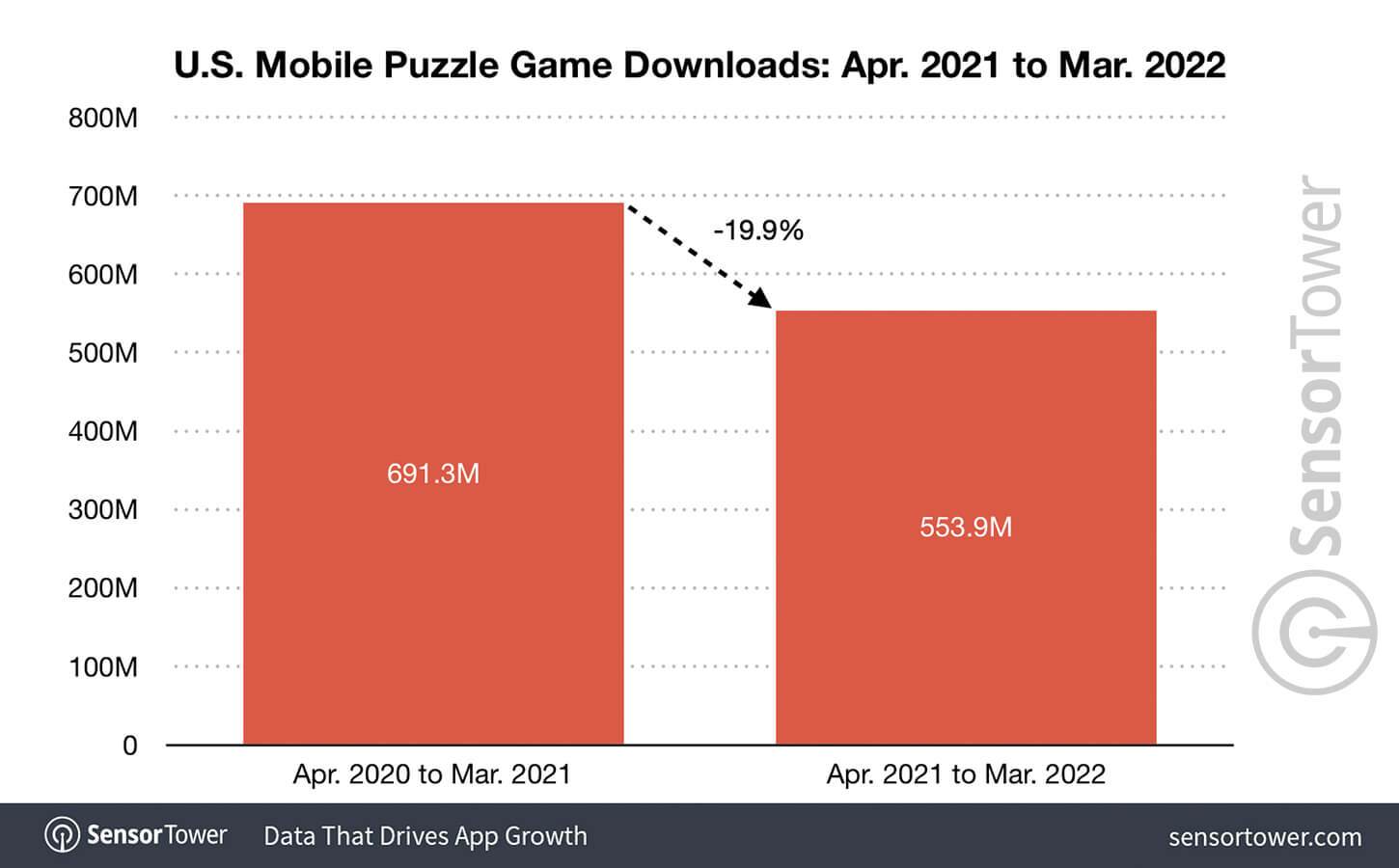 The Classic Match 3 subgenre was the No. 1 revenue generator of the 11 Puzzle subcategories during the last year, with player spending increasing by 12.3 percent Y/Y to $1.6 billion. The fastest-growing subgenre by revenue was Other Match 3, which includes titles such as Zen Match from Good Job Games and Angry Birds Blast from Rovio, with player spending rising by 101.3 percent Y/Y to approximately $161 million. It should be noted that each subgenre consists of a different number of titles.

Other Puzzle was the No. 1 subgenre for downloads, accumulating close to 164 million installs and featuring games such as Woodoku from Tripledot Studios and Brain Test from Unico Studio. All Puzzle subgenres saw a decline in downloads during the last year, with Other Match 3 seeing the smallest decline, with installs decreasing by 2.2 percent Y/Y. 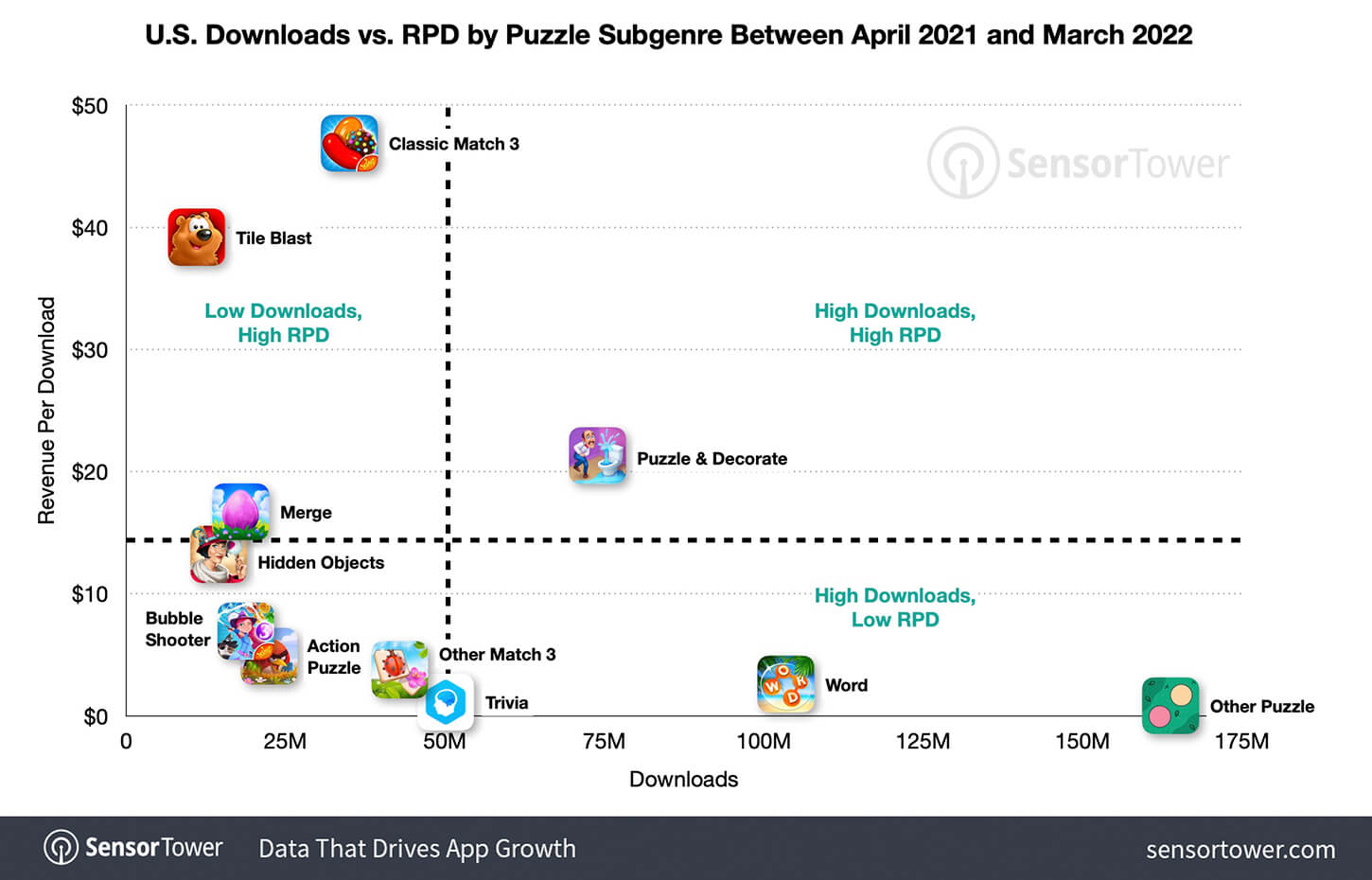 Analyzing revenue per install, Classic Match 3 was the leader, generating approximately $47 in spending per download over the last year. Tiles Blast ranked No. 2, while Puzzle & Decorate ranked No. 3. It should be noted, of course, that this metric does not take into consideration lifetime RPD, and so historical downloads are not used.

As highlighted in Sensor Tower’s Q1 2022 Data Digest, Wordle from Lion Studios was the most downloaded mobile game in the U.S. during the last quarter, picking up 9 million installs. The title is unrelated to the viral web game of the same name, though it did integrate the six guess gameplay mode made popular by its counterpart in early February. During Q1 2022, the mobile title had the most U.S. App Store downloads since Among Us from InnerSloth in Q4 2020, accumulating 8.6 million installs.

Puzzle & Decorate title Royal Match from Dream Games has been one of the most successful and fast-growing mobile Puzzle games over the last year. Launched in February 2021, the title generated $208.4 million from player spending in the U.S. during the last year, with revenue rising every quarter and peaking in Q1 2022 at $67 million.

The Merge genre has become one of the most talked about trends in the mobile games industry over the last few years, a topic covered numerous times during GDC 2022. Led by titles such as Merge Dragons from Gram Games and EverMerge from Big Fish Games, the genre accumulated $298.3 million during the last year, a rise of approximately 5 percent Y/Y. One of the fast-risers in the space is Merge Mansion from Metacore Games, which has picked up more than $48 million during this period and ranked as the No. 21 revenue generating Puzzle game over the last year, hitting $17.6 million in Q1 2022 alone.

Finding the Next Growth Phase

Puzzle game spending has slowed down significantly over the last year in the U.S. compared to previous growth. Between April 1, 2020 to March 31, 2021, genre revenue increased by more than 33 percent Y/Y, while over the past year spending slowed to 4.2 percent. However, Puzzle, which ranked as the No. 1 revenue generating genre in the U.S. during this period, continues to grow, and the highly competitive space is still finding new success stories and areas of innovation.