YouTube’s mobile app has grossed $1 billion in revenue globally from in-app subscriptions, according to Sensor Tower Store Intelligence estimates. The Google-owned video platform is just one of 7 non-game apps to generate this amount across the App Store and Google Play since 2012.

A record October 2019, during which the app saw $60 million in worldwide user spending, pushed YouTube past the milestone. The United States has been responsible for the greatest share of the app’s lifetime revenue, accounting for $750 million, or 75 percent, or the $1 billion spent by users since the app began monetizing in October 2015 through YouTube Red (renamed in 2018 to YouTube Premium). 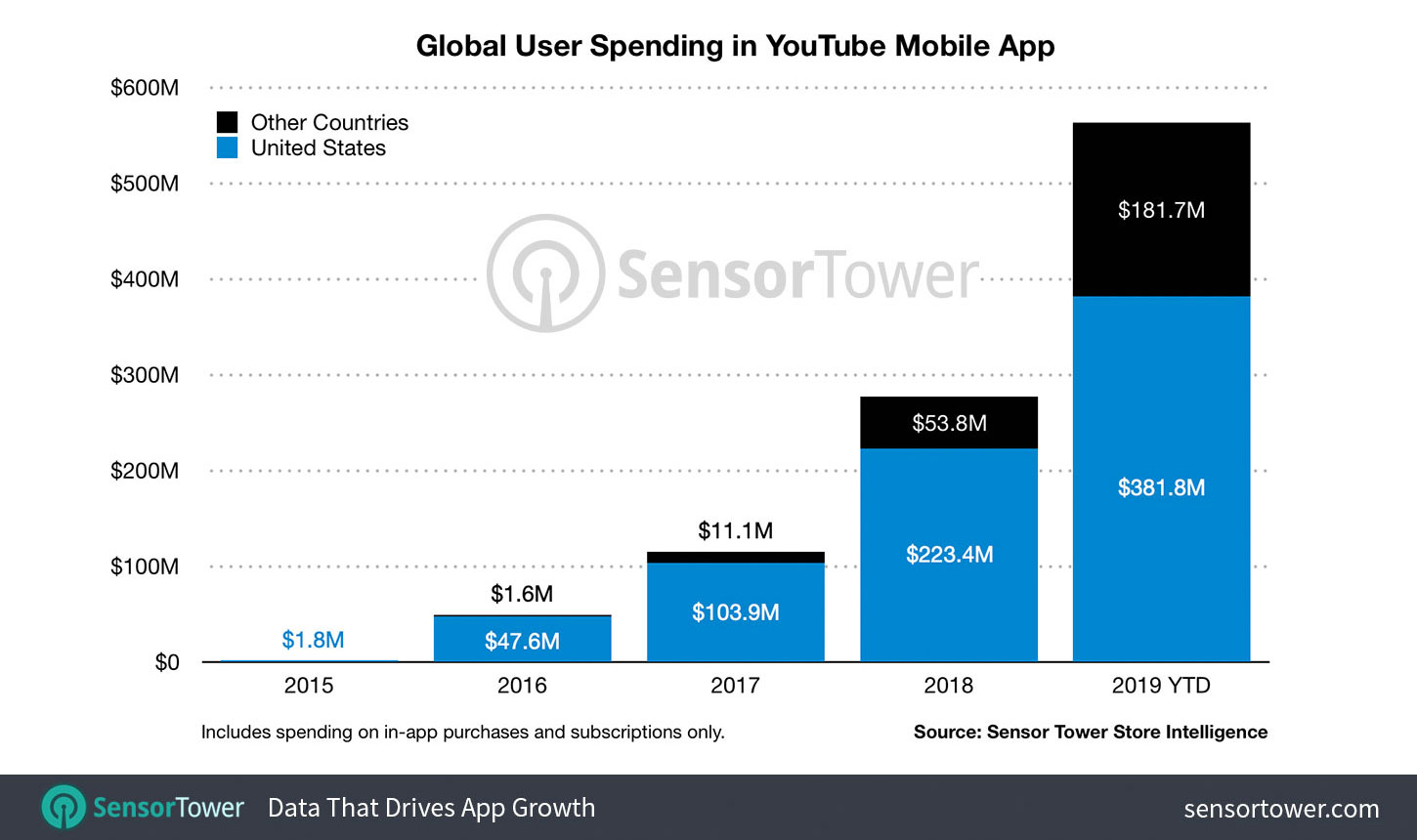 The $563.5 million YouTube has generated globally year-to-date is twice the amount grossed over the entirety of 2018, with Q3 2019’s $164 million revealing 87 percent growth year-over-year. The app’s market share has grown, too; in 3Q19, YouTube’s revenue represented a 19 percent of all spending in the top 10 SVOD apps globally on the App Store and Google Play, which include competitors such as Netflix and Chinese video platforms iQIYI and Tencent Video, up 9 percentage points from 10 percent in 3Q18.

Growth in the U.S. and Beyond

U.S. users alone have spent $381.8 million in the YouTube app so far in 2019, which is 70 percent greater than the $223.4 million it grossed in the country during all of 2018. Japan also showed impressive growth in 3Q19, with users there spending $11.4 million in the app compared to $1 million during the year-ago quarter. Despite being the second highest-earning country for YouTube on mobile, Japan accounted for only 7 percent of its revenue in 3Q19, with Great Britain representing its third largest market at 3.7 percent of spending.

YouTube has built itself to a billion dollar business on mobile alone—but to sustain its growth, Google will need to work out its approach to original content, which is only in its infancy on the platform. Overcoming the challenges of major new competitors such as Disney+, as well as the competition it faces from for user-generated content platforms including Twitch and Mixer, will be crucial to YouTube maintaining its market position.