During the first quarter of 2016, the top 1 percent of U.S. App Store publishers with paid or in-app purchase (IAP) supported apps generated approximately 94 percent of all revenue on the store. In this post, we'll examine that surprising finding in more detail, along with our analysis of the top 1 percent's contribution to total downloads for Q1 as tracked by the Sensor Tower Store Intelligence platform. 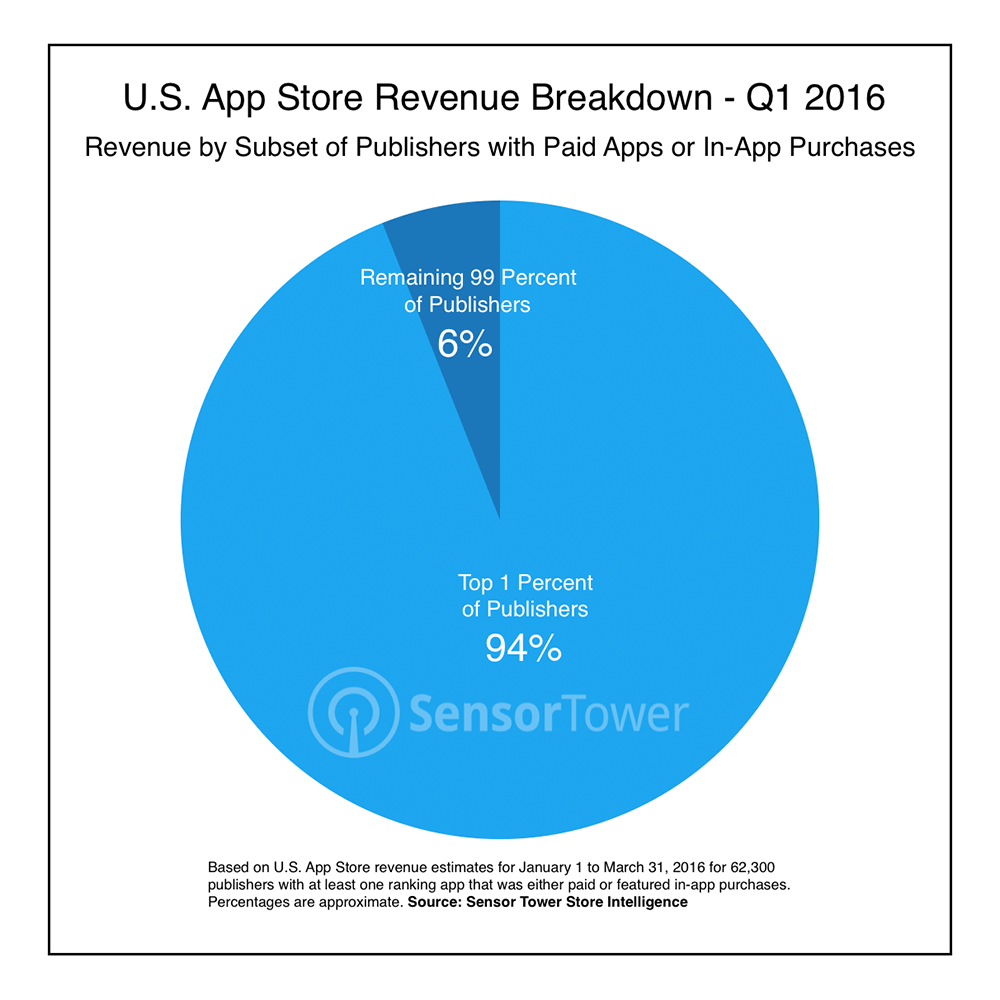 The most surprising takeaway from our analysis of U.S. App Store publishers is that the top 1 percent of those who monetize their apps accounted for 94 percent of the store's revenue last quarter. That means approximately $1.34 billion of the estimated $1.43 billion in net revenue generated by the store during Q1 went to 623 publishers, the remaining 6 percent—approximately $85.8 million—was divided among the other 61,677 publishers whose apps are paid or feature in-app purchases.

The top 1 percent of revenue earning publishers on the U.S. App Store during Q1 was comprised of familiar juggernauts such as Supercell, MZ, Spotify, Netflix, and HBO. It should be noted that prominent shopping and services app publishers, such as Amazon and Uber, were not included in this analysis as they do not generate revenue via paid apps or IAPs. 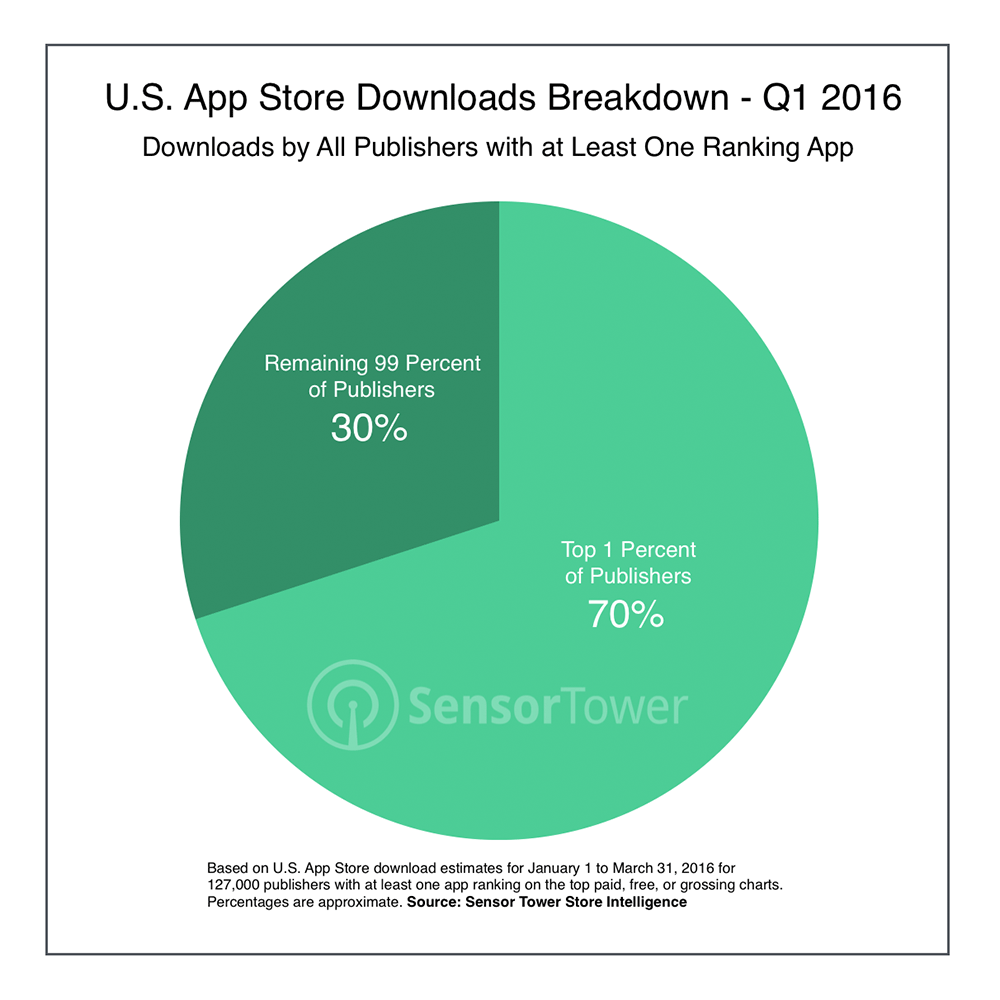 In examining the larger base of 127,000 publishers that had at least one app ranking on the App Store in Q1, we found that the top 1 percent—1,270—accounted for 70 percent of all downloads.

There were approximately 1.38 billion app downloads on the U.S. store in Q1, and approximately 966 million of those were generated by the top 1,270 publishers out of 127,000 we analyzed. The remaining 99 percent of publishers split the other 414 million downloads between them.

For an idea of the biggest players in terms of U.S. App Store downloads last quarter, be sure to read our Q1 2016 Store Intelligence Data Digest.

The Importance of App Store Discoverability 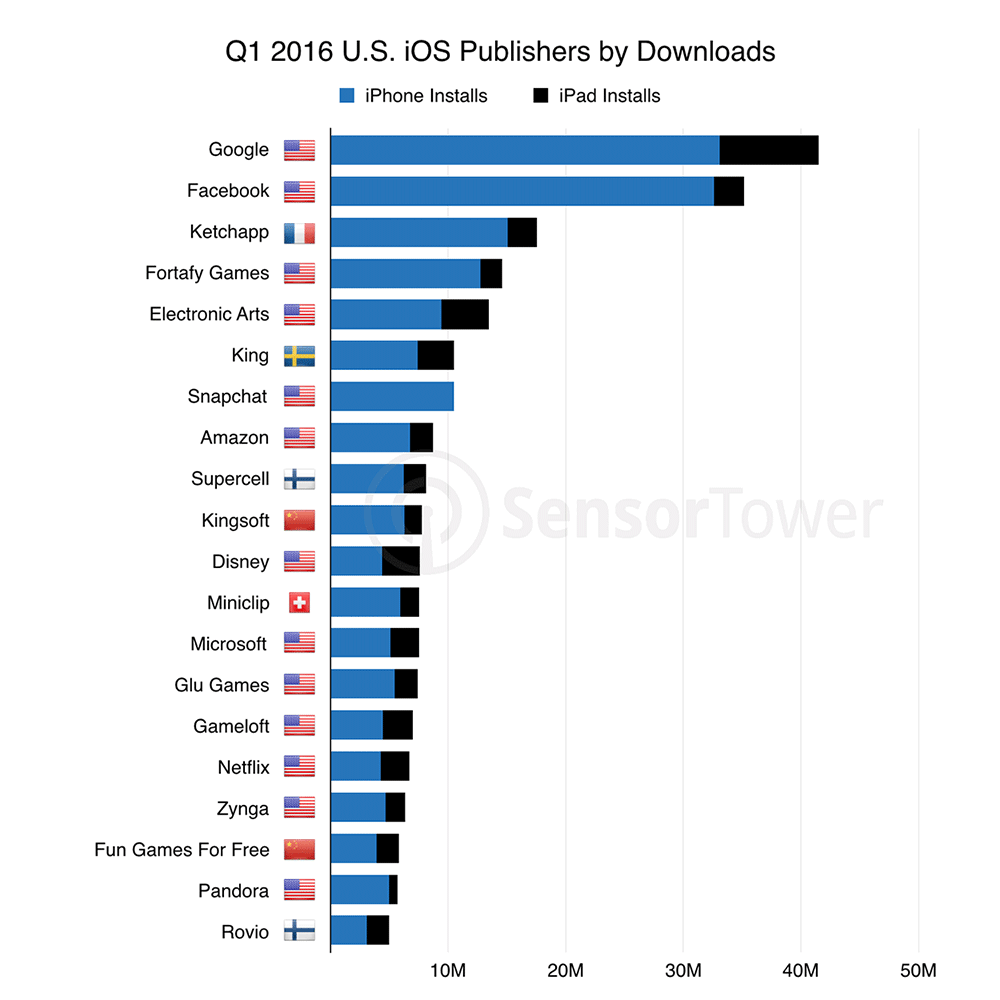 This dominance of the U.S. App Store's revenue and downloads by such a small percentage of its publisher base probably doesn't come as a surprise to most app marketers. The issues faced by companies hoping to get their apps discovered by Apple's mobile audience are well documented and widely known, and continue to fuel rumors that a major overhaul of the store, focused on improving discoverability, is in the works.

Obviously, an App Store on which it's easier to find new apps is in Apple's best interest. It can only serve to attract more publishers—enticed by the idea that their apps won't languish in obscurity—and drive more revenue, as users (hopefully) find and pay for more apps, and Apple takes its percentage of their gross earnings.

Intense competition for new users will still exist when this redesign finally arrives, no matter how easy it is to find apps. Publishers will continue to need to do everything they can to increase discoverability on their own, by staying on top of search trends and optimizing their apps for search, conversion, and monetization through platforms such as App Intelligence. We're intrigued to see what another analysis like this may uncover in 12 months' time.