As has become something of a yearly tradition, Apple used its keynote during last month's Worldwide Developer Conference to divulge the latest official, cumulative amount paid to iOS developers worldwide—and this year the number totaled $50 billion. We wanted to see how that compared to previous years, so we created the chart you can see after the break. In short: When we calculated the year-over-year revenue growth based on Apple's figures, the 12 months leading up to WWDC 2016 were significantly better for the App Store than the previous year.

In order to create this chart, we utilized cumulative net (paid to developer) revenue figures provided by Apple executives at events beginning with the 2011 Worldwide Developer Conference (WWDC), and calculated trailing 12 month (TTM) gross revenue figures based on them. Google has divulged official revenue numbers far less frequently than Apple, but, when it has done so, they were already in TTM terms.

Last month, Apple announced that $50 billion had been paid to iOS developers since the App Store launched in 2008. Adding back the 30 percent in fees Apple withholds from developer payouts, cumulative App Store revenue to date now tops $71.4 billion according to the company's own figures.

Using that same approach, we calculated that gross worldwide App Store revenue grew approximately $28.57 billion between June 2015 and June 2016. According to Apple's own figures, however, it grew substantially less between the same timeframe in 2014 to 2015, adding $14.28 billion to the cumulative total during that period.

Prior to that, Apple's figures show the App Store growing at faster rate year-over-year. So by all (official) accounts—and as you can see below—revenue growth for the App Store seemed to have slowed worldwide as of June 2015. 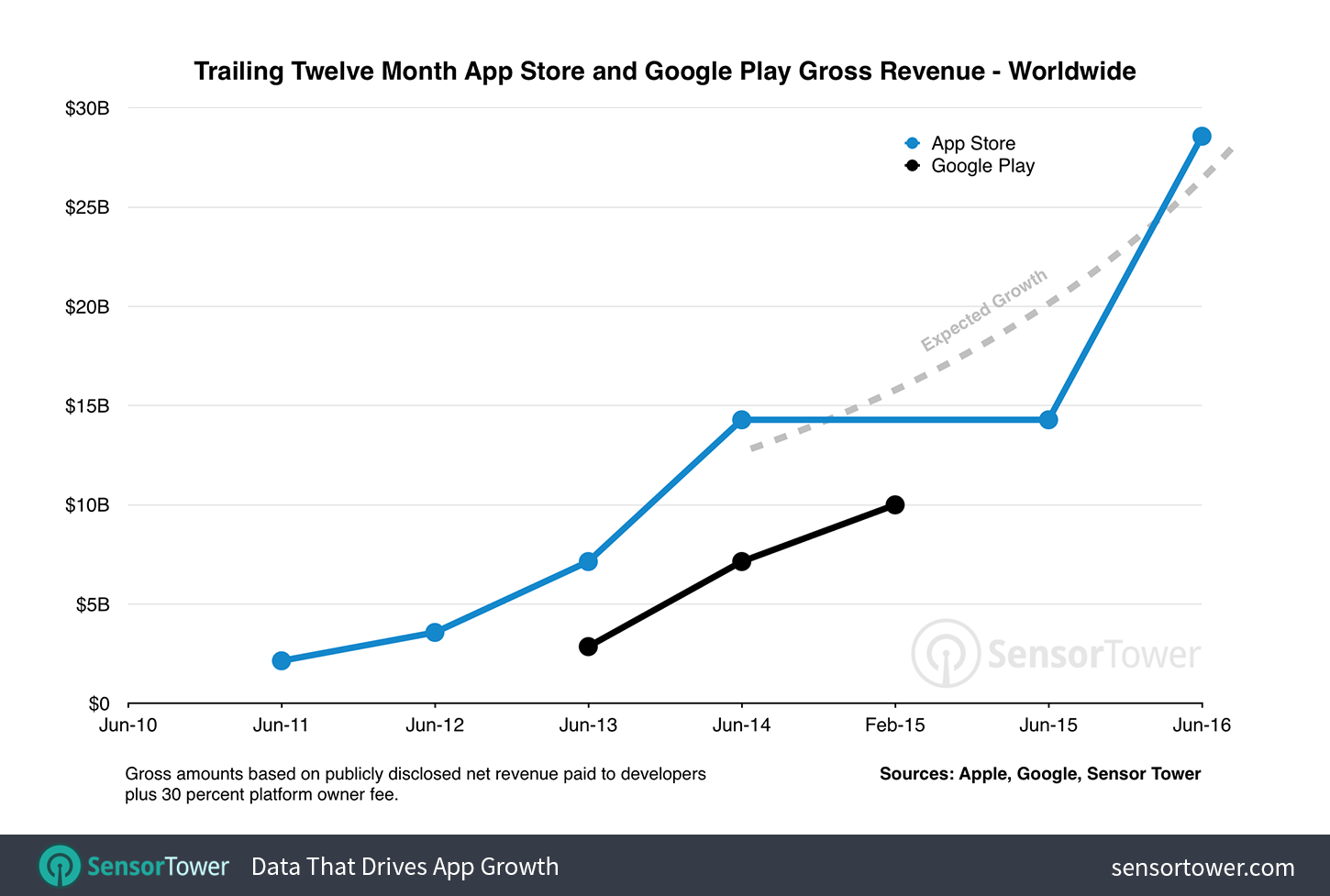 Andreessen Horowitz partner and analyst Benedict Evans has previously blogged about this apparent slowdown in App Store revenue growth, and, like him, we agree that at least part of that flat section of the chart above can be attributed to rounding. We would have expected to see something closer to the grey dotted trend line in the above chart.

Still, our own Store Intelligence estimates tell a different story for the same period, displaying a much more consistent rate of growth. Of course, we don't know why Apple seems to have been (at least somewhat) underreporting its own numbers.

As you can see above, we also charted the official revenue figures disclosed by Google for Google Play (also worldwide) during this period, but such announcements where less forthcoming from its Mountain View HQ. Looking at the 2014-2015 period, however, it appeared as though Google Play was on track to surpass the App Store in terms of cumulative gross revenue.

Google didn't reveal a new TTM revenue figure at Google IO 2016, however, but our own data doesn't show Google Play worldwide gross revenue growing at a rate that would match the $50 billion total Apple announced in just one year.

Hopefully Google will share official revenue numbers before Google IO 2017 so we can get an official perspective on how Google Play is growing compared to Apple's store—which, as displayed in these official figures along with what we see in our own data, is a platform that has far from reached its peak.