Most of the mobile world was focused on Google's I/O 2016 developers conference this week, and Apps We're Watching is taking a special look at announcements made there—some that reflect the Mountain View-based mobile giant's own take on emerging trends, and others that may set the trend for the entire space if successful.

Google's Take on the Future of Messaging Apps (and Bots)

If you've been reading this column for a while now, you'll recall that we covered the topic of messaging bots a few weeks back after Facebook's F8 conference, where Mark Zuckerberg and co. revealed their imminent inclusion in Messenger. Google is also eyeing A.I. as a pillar of its future apps, albeit in a somewhat different way.

At I/O, the company debuted its forthcoming Messenger rival, Allo. Baked into the app is the Google assistant, which, unlike its equivalents in Facebook's app, won't appear as separate silicon entities to converse with—it's omnipresent, following along with conversations to suggest travel routes, book dinner reservations, and basically handle all the mundane tasks it "thinks" it can help with. You can see examples of this in the screenshots below. 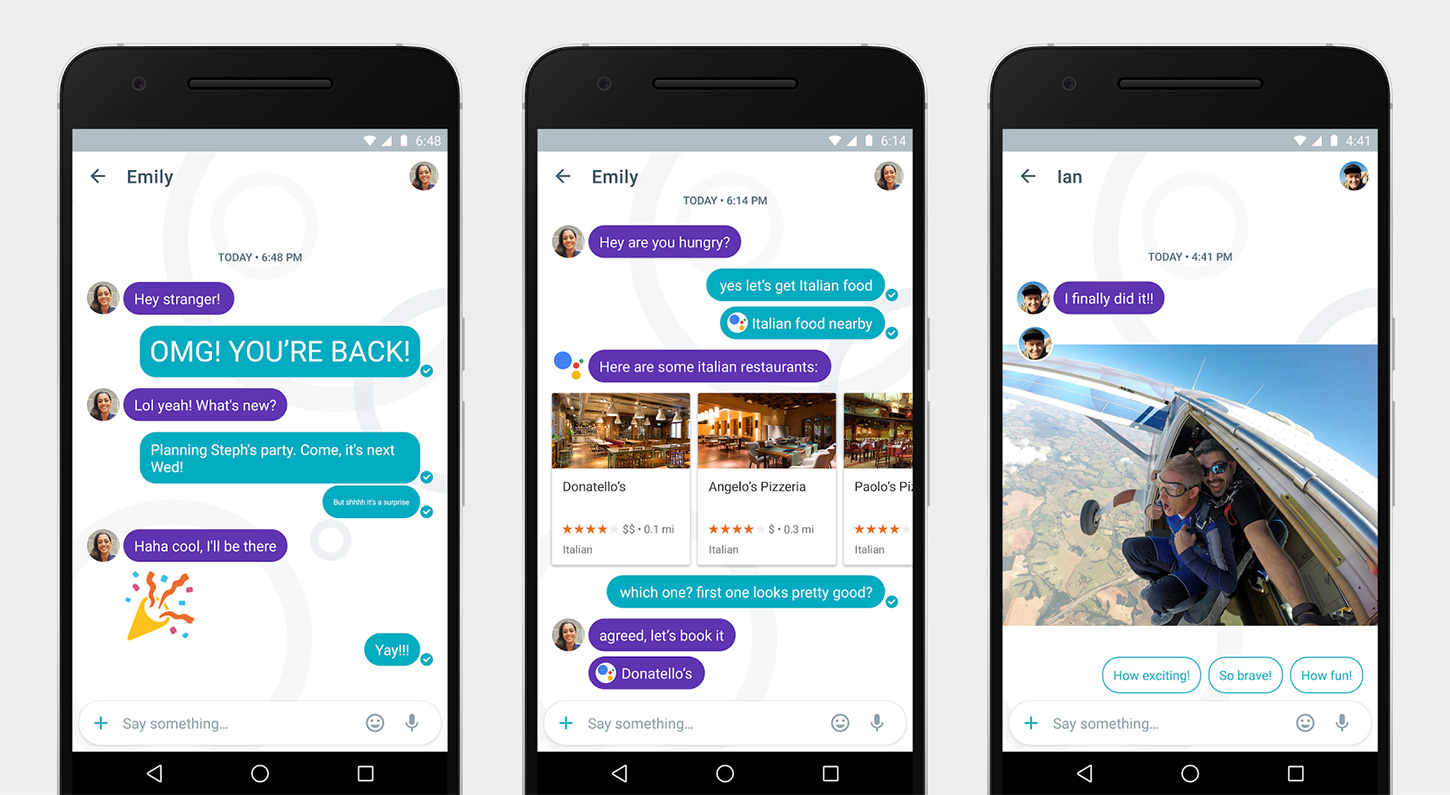 Google Allo integrates the next generation of Google Now, dubbed the Google assistant, seamlessly into the messaging experience.

One of the aspects of life Google feels its assistant can help with is actually conversing with users' friends and contacts. It'll do this by incorporating the smart reply feature of Inbox, suggesting responses to Allo users based on the content (and context) of messages they receive. Rather than simply offer the ability to respond with a "great!" or "be right there!", the assistant will analyze incoming messages to suggest comebacks with deeper context, such as "that's a cute dog!" in response to the receipt of a dog photo, or "I love linguine" when friends text pics of the Italian dish.

Between Facebook's messaging bots reveal and Google's announcement of Allo, two of the mobile space's largest players have signaled that A.I. assistants are (or at least what they hope are) the future of communication apps. If they take off—and the demos and proposed uses cases are certainly compelling—they may set expectations for all future apps of this type. Of course, Facebook's flavor of bots are still trying to prove their utility, and Allo is weeks away from release, so we shouldn't expect the space to change overnight.

Last week, we covered Google's Gboard, a keyboard replacement app for iOS, and how it represented the furthering of the company's attempts to replace core elements of Apple's operating system with its own "foundational level" products—Google Maps and Google Photos being a couple of other examples. At Google I/O, we saw another instance of this with the unveiling of Duo. If it looks familiar from the screenshots below, that's because it's reminding you of Apple's own FaceTime, the factory-installed app Google clearly intends for it to replace. 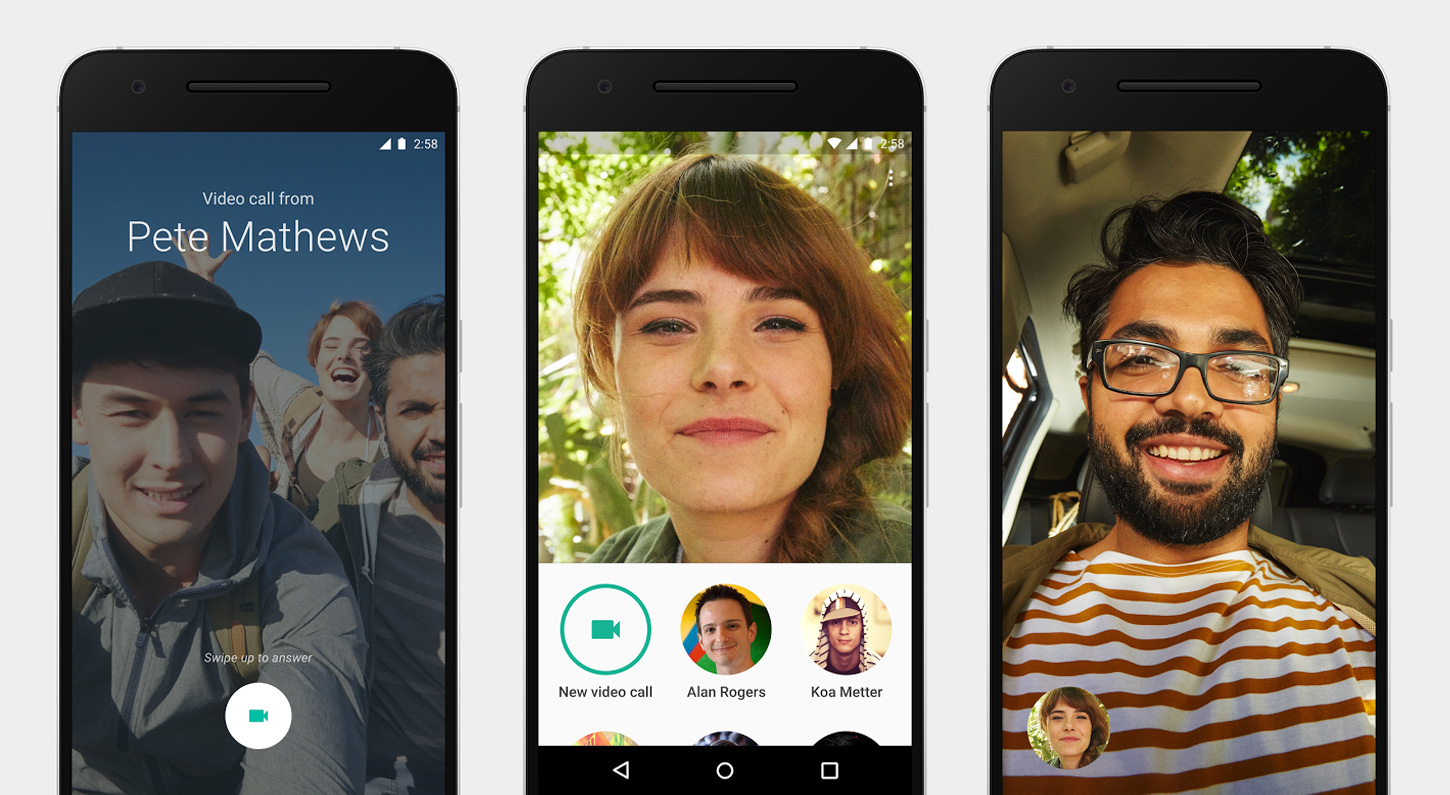 Google Duo is a pure and simple one-to-one video calling app intended to rival Apple's FaceTime in ease of use.

Like Allo, Duo will also be debuting on Android in addition to iOS this summer. When it arrives, it will coming toting features such as a live video preview of incoming calls and lighter bandwidth requirements than other FaceTime alternatives.

The Unanswered Questions of Instant Apps

The last bit of news out of Google's event we'd like to cover this week could be the one that will have the biggest impact on the future of apps—at least on Android. Instant Apps, without going into exhaustive detail, will enable users to run component modules of full apps on-the-fly without requiring a complete installation. In one example, a user could send a BuzzFeed cooking video to a friend via text, and rather than load the mobile web when tapped, it would quickly install only the element of the BuzzFeed app required to play it.

It's an intriguing idea with plenty of potential, and Google says it will be rather painless for most developers to implement. Beyond this, however, lie a multitude of questions (many of which are yet to be thought of, probably), but two immediately come to mind. The first is how publishers will track these modular installs—not just their quantity, but where they originate from and how they were discovered. We know that Google has been rolling out direct installations from search engine results pages (SERPs), but Instant Apps will potentially have many more sources, from the text message example to tiny game demos launched from advertisements and beyond.

The other question that immediately comes to mind is how parceling out pieces of apps will affect full installs. Obviously this will depend on the app, but there's already plenty of talk about how Instant Apps could replace (emphasis on could) their full counterparts in some, or even many, cases. There are many more hypotheticals now than certainties, though, and as with any uncharted territory, we won't really be able to tell if it's better than where we are now until we actually get there. At this pace, we may arrive sooner than we think.