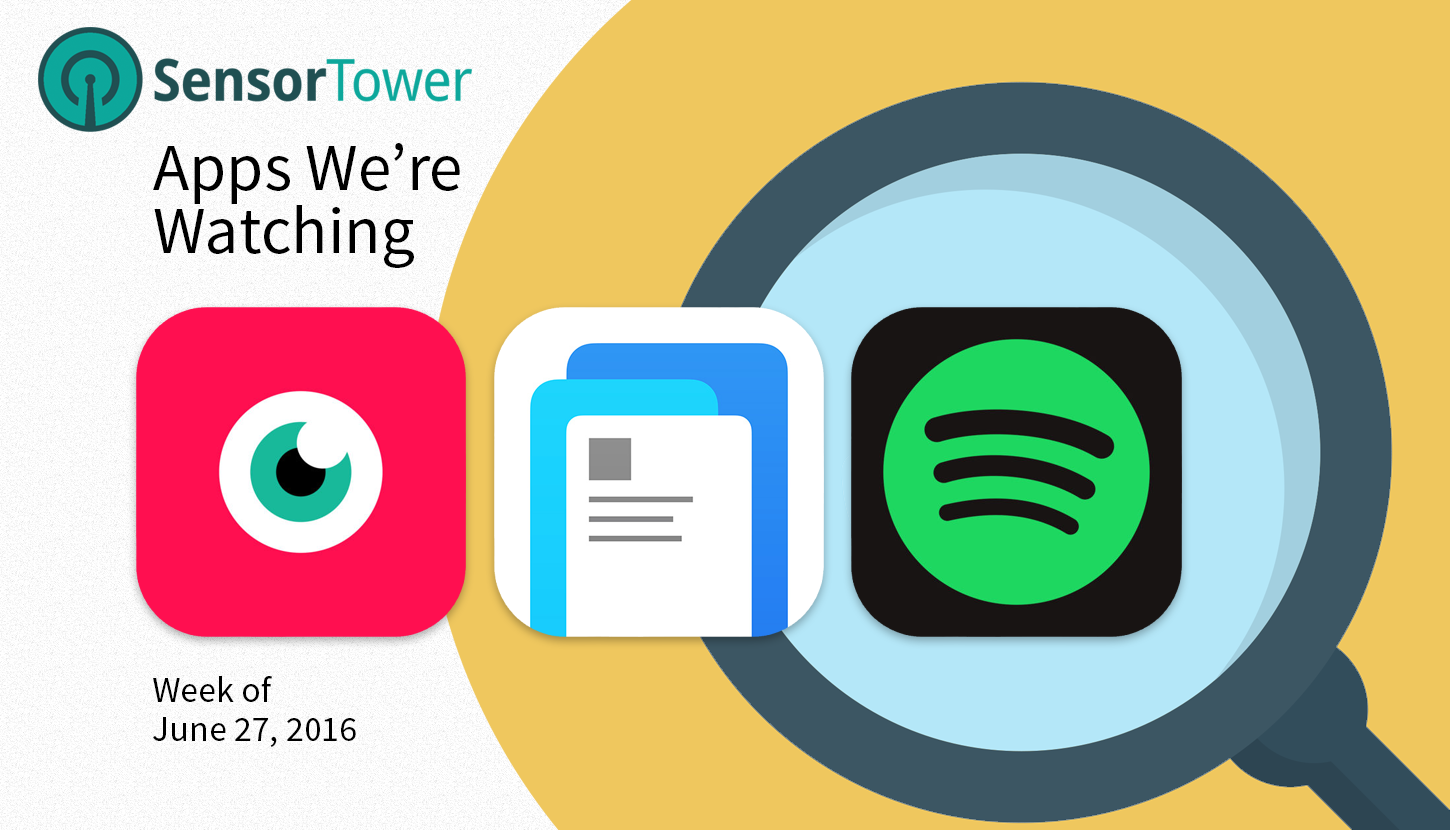 It's fitting that, as we in the U.S. are about to celebrate the Fourth of July, this week's edition of Apps We're Watching will kick off with a look at a (relative) new release that's skyrocketing: Live.ly. We also have some stats on Facebook's latest mothballed app and a breakdown of what has Spotify and Apple making a public display out of a rejected app update. Read it all inside.

If You Haven't Noticed Yet, Live Video Is One of Mobile's Hottest Trends

As we close out a quarter that saw a suburban mom achieve overnight superstardom on Facebook Live and members of the U.S. Congress broadcast a sit-in on Periscope, it's safe to say that the mobile streaming of live video is entering a golden age. App developers are naturally eager to test its waters and discover how big this market really is, and at least one has met with impressive early success this week.

Musical.ly—maker of the popular lip-synch-video sharing app of the same name—launched Live.ly in mid-June, and this week it climbed the U.S. App Store's all categories chart to the very top, where it currently resides as the No. 1 free iPhone app in the country, above Facebook, Instagram, Messenger, and Snapchat. Below, you can see its rise to App Store fame visualized via Sensor Tower's App Intelligence: 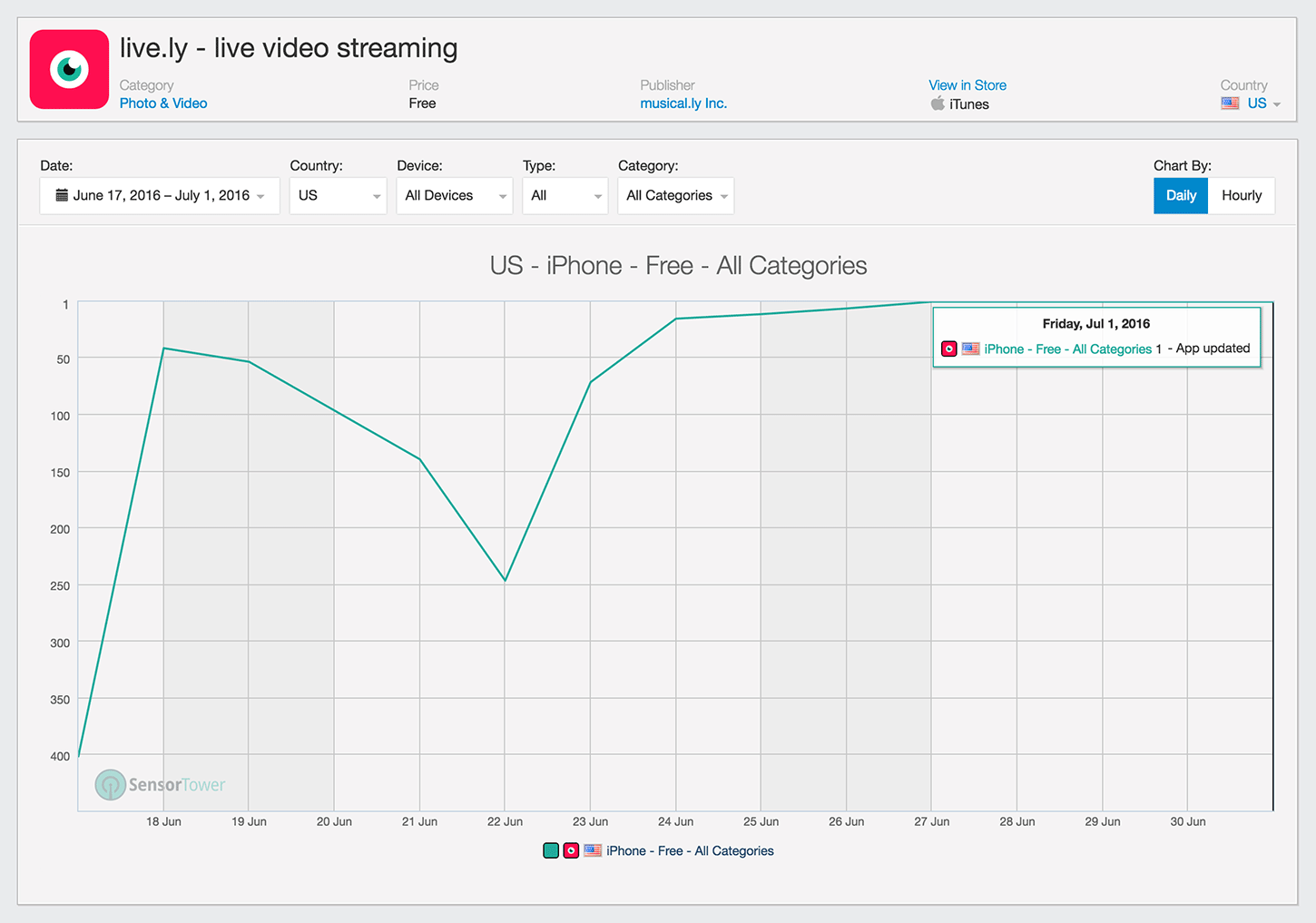 Live.ly reached No. 1 in all categories on the U.S. App Store 11 days after launch.

Musical.ly initially launched the app with a waiting list, as it scaled the service, and once the gates were open for all Live.ly saw a brisk ascent up the charts. This rapid growth has (not surprisingly) caused issues with "traffic jams" when starting new streams, something that's a testament to the app's popularity but also crucial to resolve in order to minimize user churn.

Another of the apps from Facebook's now-shuttered Creative Labs division has gone the way of Slingshot, Rooms, and Riff (big points to anyone who remembers those last two): Paper.

Designed as a new viewing experience for stories from the Facebook News Feed, the iOS-only (and, in fact, U.S.-only) app managed to amass more than one million installs in its two-plus-year run, with approximately 219,000 of those coming in the last 12 months. As you can see from the rankings history below, however, its popularity was in steady decline. 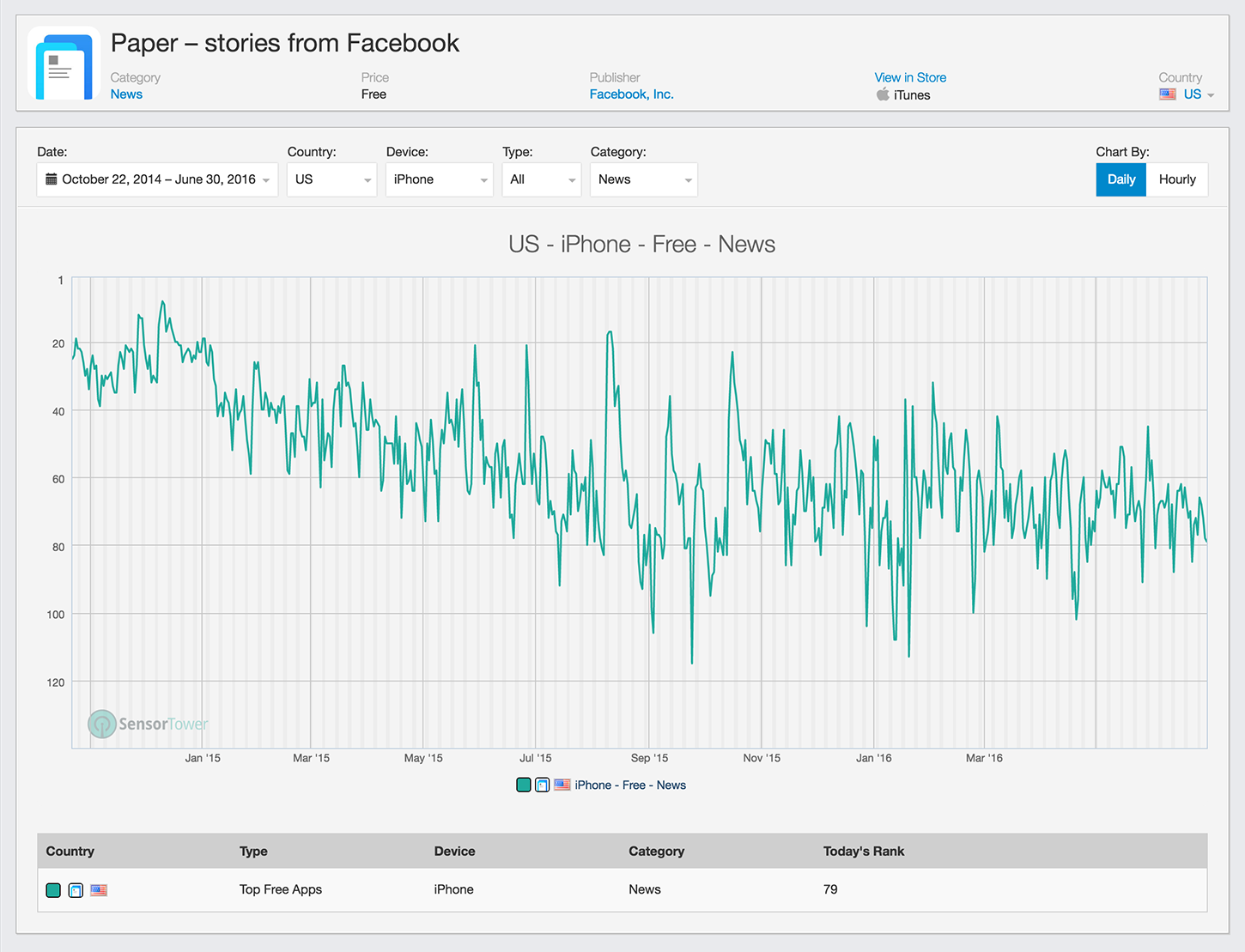 Paper had a brief moment of popularity in the News category, but never managed to establish a foothold.

Facebook has already pulled the app from the App Store and users will no longer be able to log into it after July 29. To those displaced Paper diehards, the publisher has pointed to the app's DNA persisting in the form of the core Facebook app's Instant Articles. For many, we suspect, that's of little consolation for the loss of Paper's frankly far more elegant interface.

At least June was a much better month for another Creative Labs alumni.

Spotify was the U.S. App Store's highest-grossing app in May.

Last up this week, the app development community (and tech journalists) were abuzz about Spotify's public response to Apple's rejection of its latest app update. As app developers are keenly aware, having an app update rejected is usually nothing out of the ordinary; it's annoying and generally fixable. But your rejections probably don't make it onto Reuters.

The public discourse between the two companies has brought in-app subscriptions back into the spotlight just days after an announcement heading into this year's WWDC that Apple will be lowering its share of revenue from them after a year. App Store drama? Perhaps, but there could potentially be implications for all developers who rely on a subscription model that arise from this situation—depending on how far Spotify wishes to take the matter. We'll be watching it closely.