This week in Apps We're Watching, we've got a look at three of the apps that stood out in our App Store analysis over the past seven days, including Moments from Facebook, the Starz streaming service, and Transformers: Earth Wars. Read on for our take on why they're worth keeping an eye on.

Facebook's Moments Topped the Store—Here's Why

Facebook's used to seeing its apps at or near the top of the all categories ranking on the U.S. App Store. From Messenger and Instagram to the core Facebook app, they continually rank in the top 10. But this week, it was time for its photo album app Moments to have a, well, moment. Part-way through Thursday, it made a dramatic jump to No. 1 among all free apps, as seen in the App Intelligence category ranking chart below: 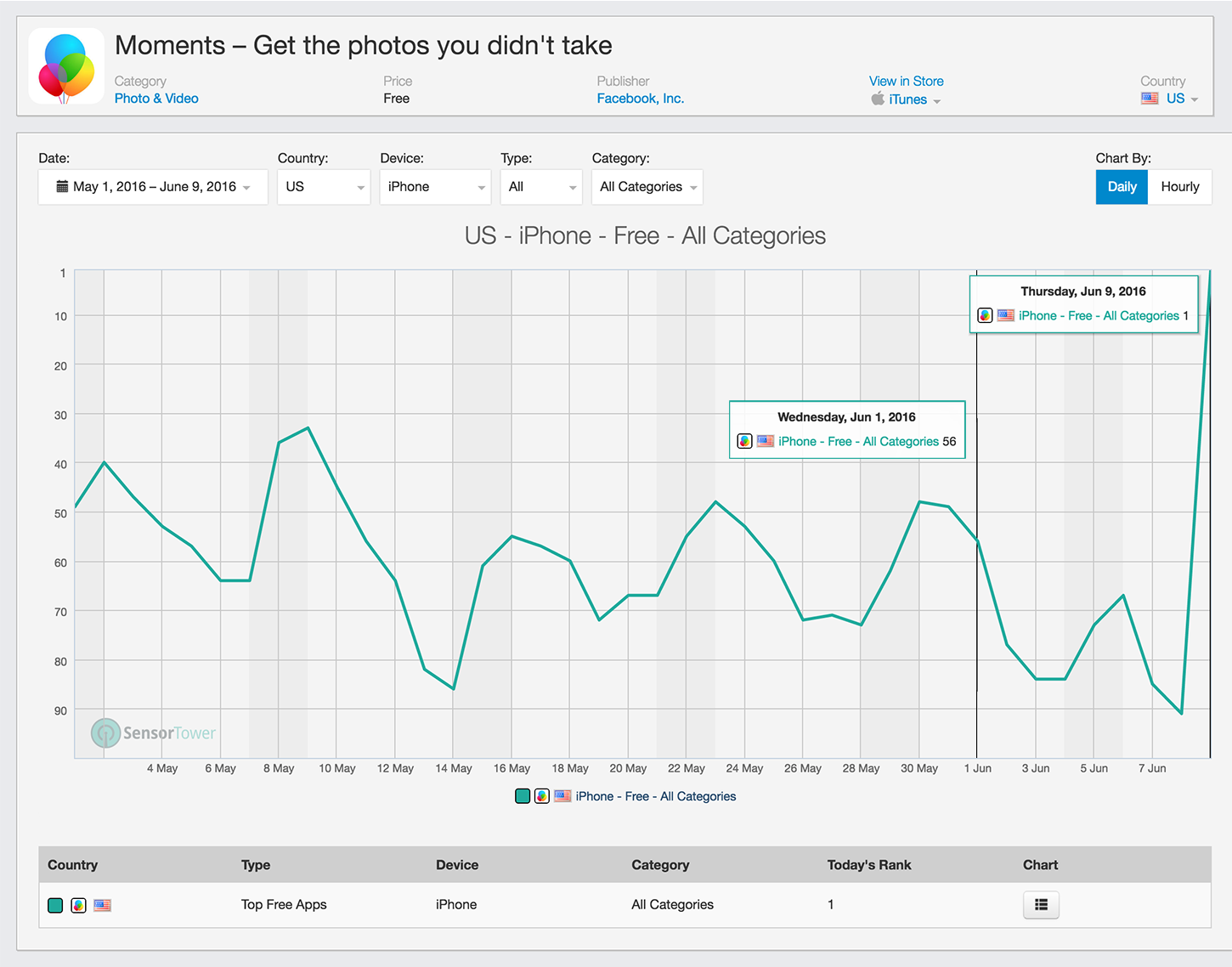 Moments shot up the all categories chart for no apparent reason at the time.

What seemed like a fluke at first glance—our Ad Intelligence platform spotted no uptick in app-install ads, for instance—was later revealed by Sensor Tower and TechCrunch legwork to be the result of a notice from Facebook to its users urging them to download the app or risk losing portions of their photos albums (specifically their Synced photos).

This wasn't to the degree of Facebook spinning off Messenger into its own app and informing users to download it or lose chat functionality, but the surge in downloads—and thus overall rank—goes to show the heft the social network's staggering user base carries when instructed to transition to a new app. Whether this forced shift to the new app by some will translate into more installs for it in general going forward remains to be seen.

Starz Streaming Started Slow, But Is Looking Up

Back in April, we covered the launch of Starz' cable-free streaming service on the App Store, as a subscription-based app a la HBO Now. Back then, we noted that the move had a positive effect on the app's overall chart ranking, but that it still ranked significantly below other streaming offerings. That's changed over time, as Starz has improved its app based on user feedback and continued to refine its approach to App Store Optimization. The results so far can be seen in the chart below: 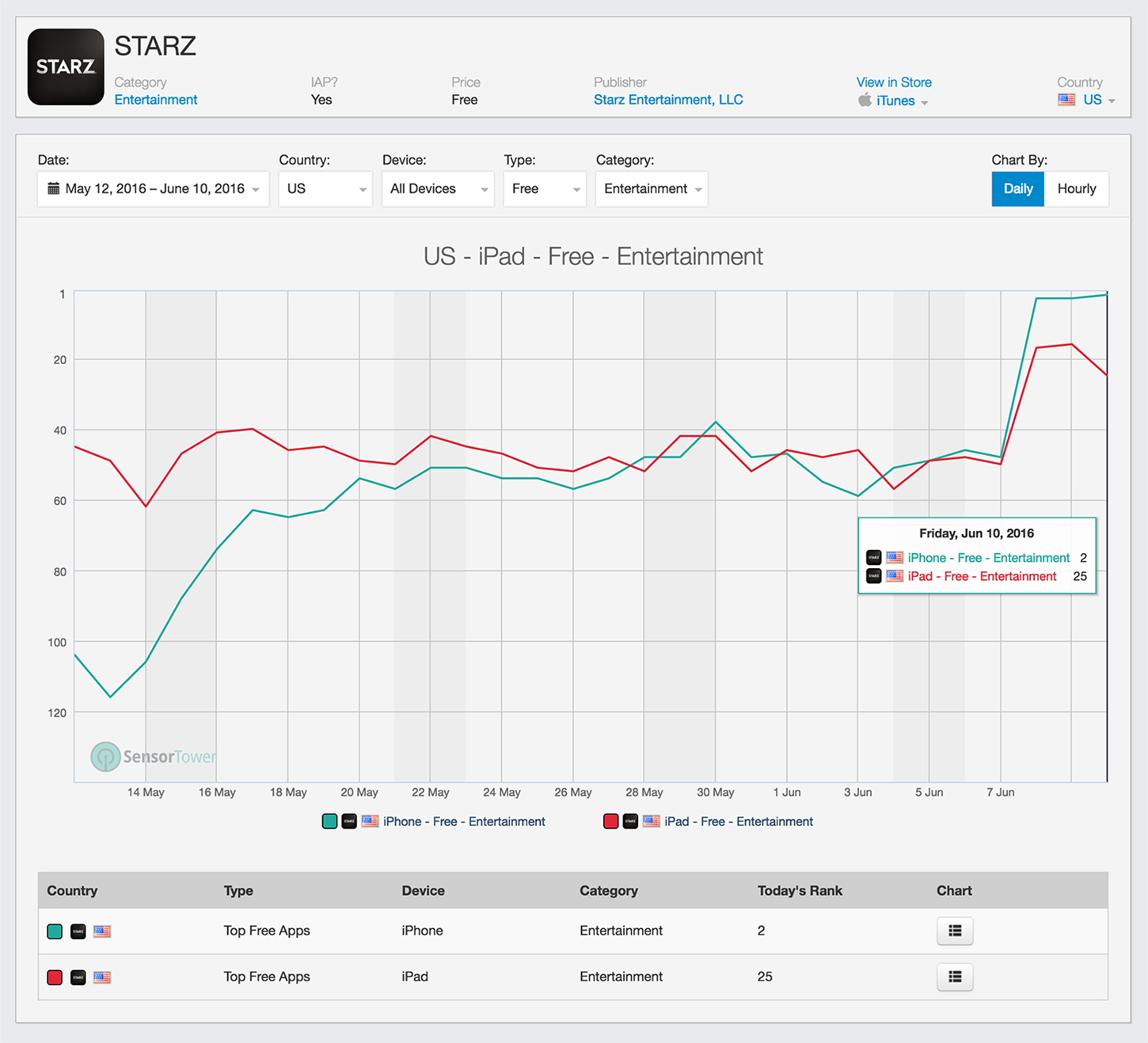 Starz is ranked No. 2 in Entertainment as of this post, right behind Netflix.

When we last checked in on it, Starz was ranked lower than 200 in all categories for free iPhone apps on the U.S. store. Today, it ranks No. 34, and an impressive No. 2 in Entertainment, behind only Netflix. A free seven-day trial has no doubt helped things along, but an analysis of user reviews for recent version updates shows that Starz is addressing may bugs and other issues that resulted in a less than three-star rating for previous versions.

Transformers: Earth Wars—Giant Robots Do Battle in a Competitive Genre

Just in time for the weekend, we end on an app that'd be perfectly suited for spending some time with after Saturday morning cartoons—if those were still a thing. Last week, Backflip Studios entered the highly competitive strategy game fray with the release of Transformers: Earth Wars, its building-and-battling game starring Hasbro's legendary giant robots. Within the first week of release, the app had already surpassed one million users on the App Store and Google Play in the U.S., as shown via the Sensor Tower Store Intelligence chart below: 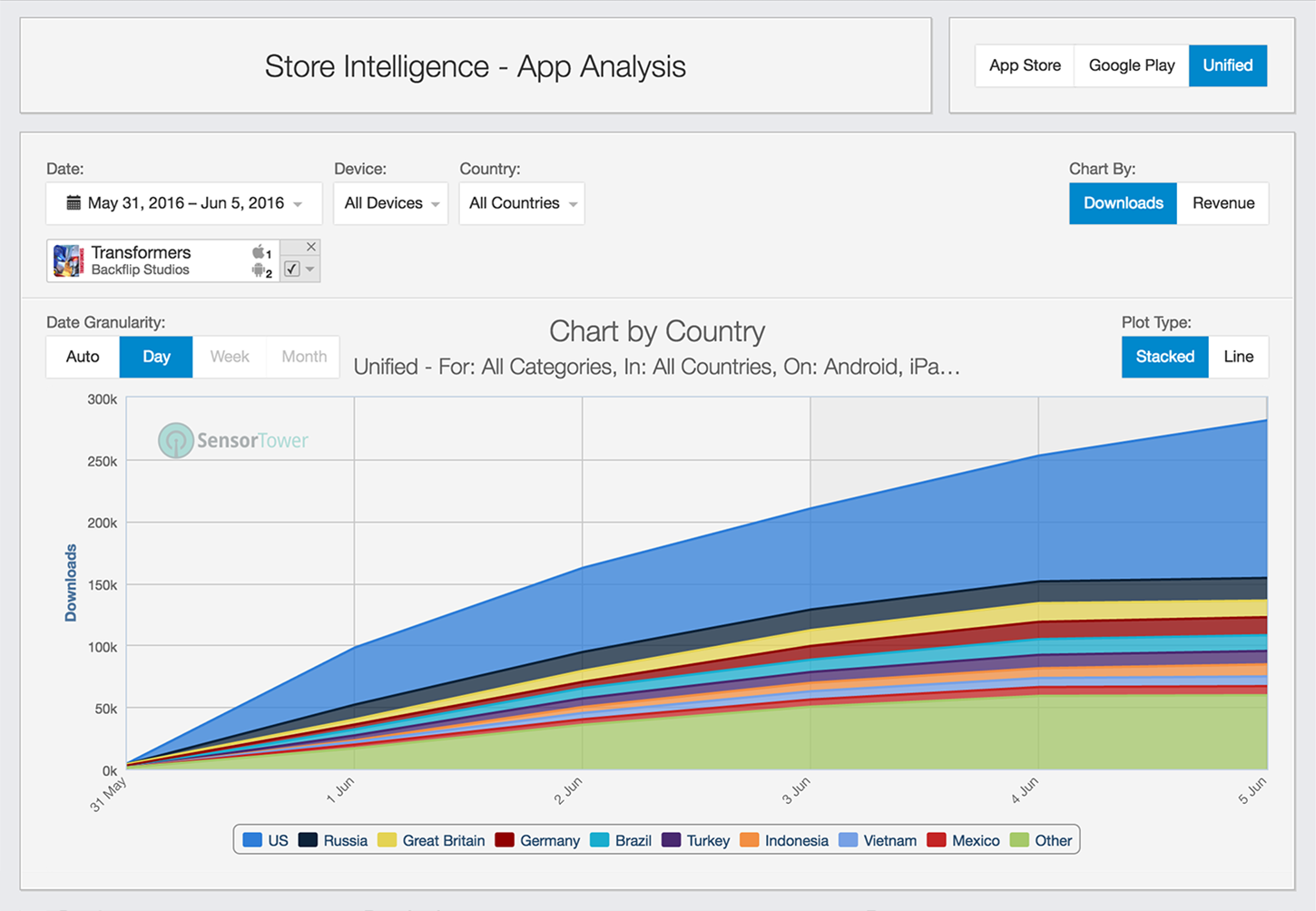 Transformers: Earth Wars launched with a bang, thanks in no small part to hardcore fans of the IP and a healthy dose of nostalgia.

The app's authentic representation of the titular robot heroes (and villains), along with high-quality visuals and varied, rewarding gameplay have been cited by early adopters as high points—and have resulted in overwhelming popular user ratings. Backflip, which is also responsible for the successful DragonVale, has clearly done well by fans and leveraged the IP in its favor—with the result being brisk adoption. Maximizing retention and expanding the title's draw beyond diehard Transformers fans remains ahead of the studio, but all indications are it has laid a solid foundation that others planning to work with such well-known IP would do well to study.