Global blockbuster Genshin Impact from miHoYo has amassed $245 million in player spending during its first month, making it one of the biggest mobile game launches ever, Sensor Tower Store Intelligence estimates show.

In its first week, the title racked up approximately $60 million and it hasn’t slowed down since, averaging a similar amount each week over the past 30 days. Not just a highly successful launch, Genshin Impact was the biggest revenue generator globally on the App Store and Google Play since its release, standing above hits such as Honor of Kings from Tencent, PUBG Mobile from Tencent, Pokémon GO from Niantic, and Monster Strike from Mixi. 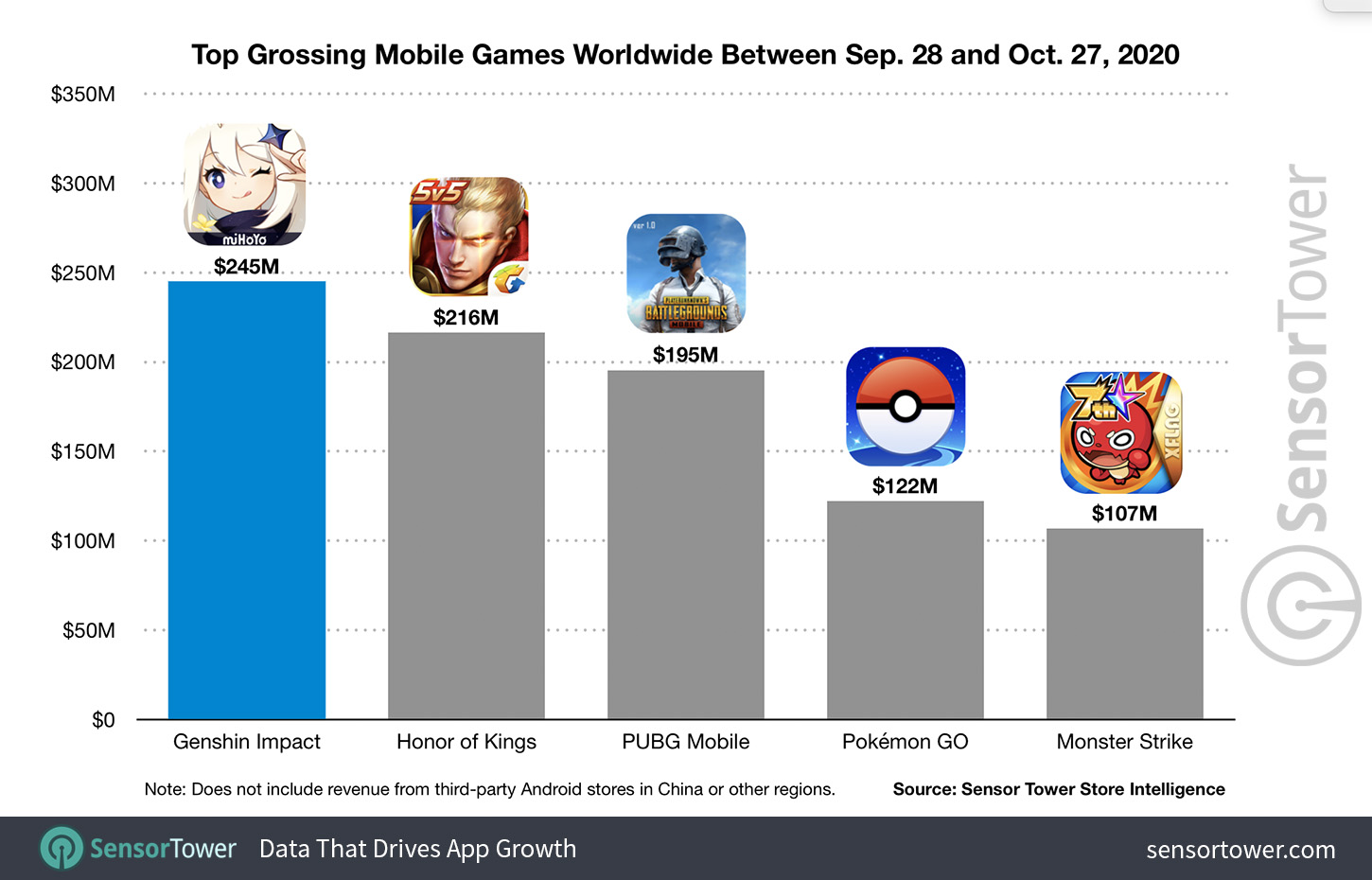 Its launch month outpaces titles such as Lineage 2: Revolution from Netmarble and Lineage M from NCSoft, both popular and established IPs that had record-breaking releases on mobile in South Korea alone. It also tops other notable global releases such as Fire Emblem Heroes from Nintendo, which accumulated $70 million in player spending during its first month, while Fortnite from Epic Games picked up $25 million in its first 30 days on the App Store. One release, Pokémon GO, grossed more in its first 30 days, however, taking in an estimated $283 million.

As a testament to its global appeal, we can see by utilizing Sensor Tower Game Taxonomy data that Genshin Impact is the biggest mobile RPG launch in the United States to date, picking up $45 million during its first 30 days in the market. It ranks ahead of Fire Emblem Heroes at No. 2 with more than $13 million, and The Seven Deadly Sins from Netmarble at No. 3 with nearly $10 million.

Although Genshin Impact ranked No. 1 globally for total player spending in its first month, on China’s App Store it ranked No. 3 behind Honor of Kings and PUBG Mobile, known there as Game for Peace. In Japan, the title ranked in No. 4 behind Monster Strike, Professional Baseball Spirits A from Konami, and Dragon Quest Walk from Square Enix, while in the U.S. it ranked No. 5 behind Roblox from Roblox Corporation, Coin Master from Moon Active, Candy Crush Saga from King, and Pokémon GO.

Globally, the App Store accounted for close to $144 million of Genshin Impact’s total revenue, or 58.7 percent. Google Play, meanwhile, accounted for more than $101 million, or 41.3 percent.

Commenting on the unique qualities of the title that have made it such a global hit, senior analyst Daniel Ahmad from Sensor Tower partner Niko Partners, an expert on China’s games industry, told us miHoYo has created an open world RPG that is accessible, yet deep and immersive. The publisher has been able to leverage its experience in developing mobile titles such as Honkai Impact 3rd, he said, as well learnings from successful PC and console titles, to develop a game that has scaled successfully across multiple platforms.

“Chinese game developers have long looked to capture Western audiences, without losing their audience at home,” said Ahmad. “Genshin Impact is a great example of how Chinese developers are succeeding in the West by focusing on high production values, popular gameplay mechanics, and deep progression systems. The game feels and plays like a console game while ultimately being a free-to-play gacha title. Genshin Impact’s global success reflects the evolution of Chinese game development, from outsourced artwork 15 years ago to full game development for the domestic market more recently, and now to full game development that resonates with global markets as well as the home front.”

Genshin Impact has shown what’s possible when developers approach mobile as a true peer to console and PC experiences while leveraging the technological potential of modern devices. Sensor Tower expects to see its success resonate throughout the industry and inspire more publishers to invest in cross-platform experiences that offer equal fidelity on mobile in the near future.