Genshin Impact from miHoYo has generated $3.7 billion from player spending worldwide across the App Store and Google Play since it was first launched on September 28, 2020, Sensor Tower Store Intelligence data reveals.

The title, which is celebrating its second anniversary this week, ranks as the No. 3 revenue-generating mobile game globally since its release. It sits behind PUBG Mobile from Tencent at No. 2, which has accumulated $4.9 billion over the past two years, and Honor of Kings, also from Tencent, at No. 1, which has picked up $5.5 billion. Outside of China, Genshin Impact ranks No. 2 for mobile game player spending, racking up $2.5 billion internationally across the App Store and Google Play. It ranks above Candy Crush Saga from King at No. 3 with $2.3 billion, and just behind Roblox from Roblox Corporation at No. 1 with $2.5 billion. 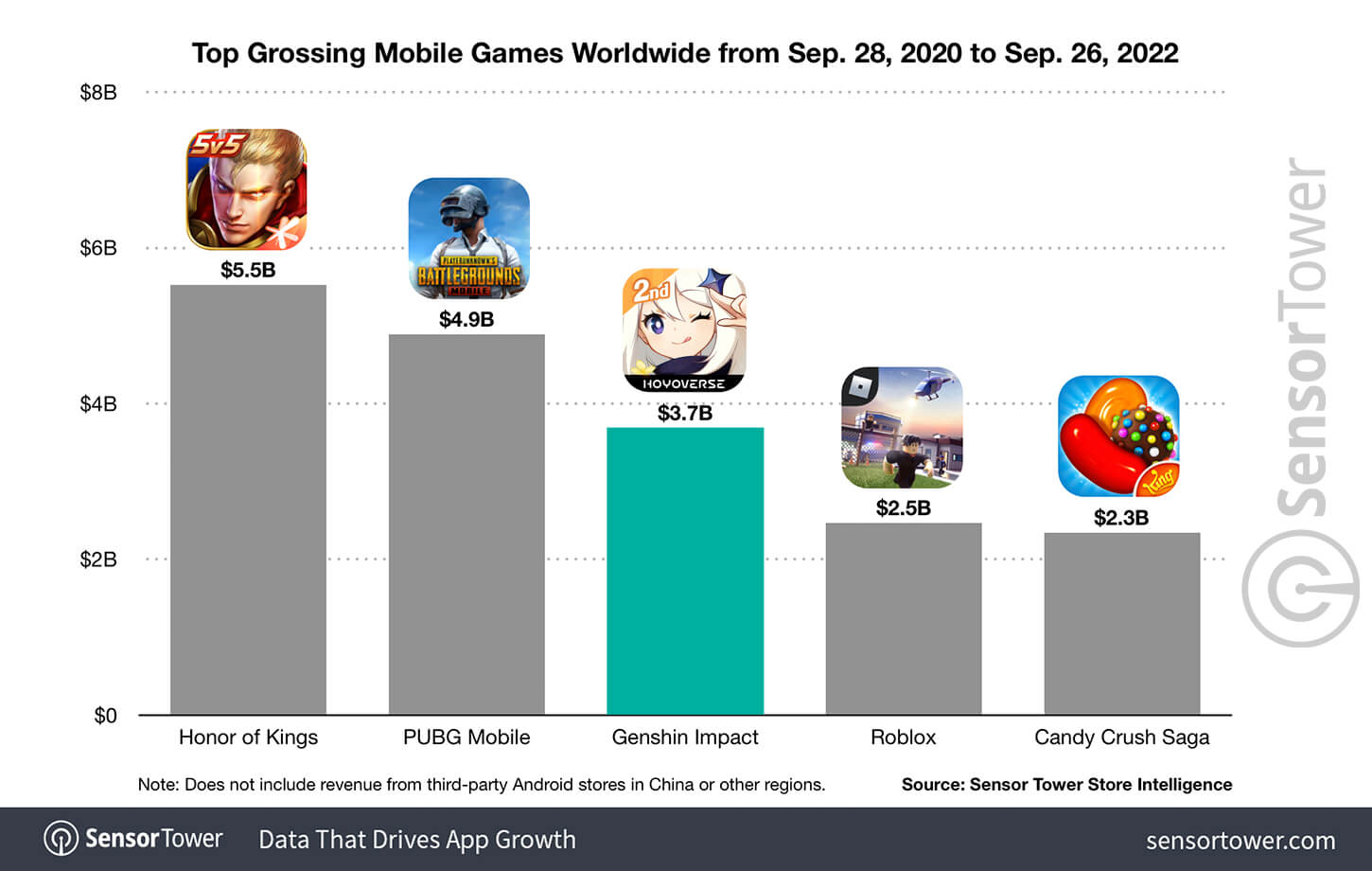 Utilizing Sensor Tower’s Game Intelligence tools, our data shows that Genshin Impact is the No. 1 revenue-generating mobile title worldwide that harnesses gacha monetization during the past two years, ranking above Rise of Kingdoms from Lilith Games at No. 2 with $1.7 billion and Three Kingdoms Strategic from Alibaba at No. 3 with $1.7 billion.

During Q1 2022, the global mobile games market experienced its first year-over-year decline in player spending, falling by approximately 5 percent to a little more than $21 billion. Q2 2022 followed a similar trend, as revenue decreased by about 7 percent Y/Y to $20 billion. Genshin Impact has defied the larger market trend, however, as player spending rose by 16 percent Y/Y in Q1 to $556 million, while Q2 revenue increased by 28 percent Y/Y to $413.5 billion. In Q3, however, revenue for the game looks set to decline Y/Y. 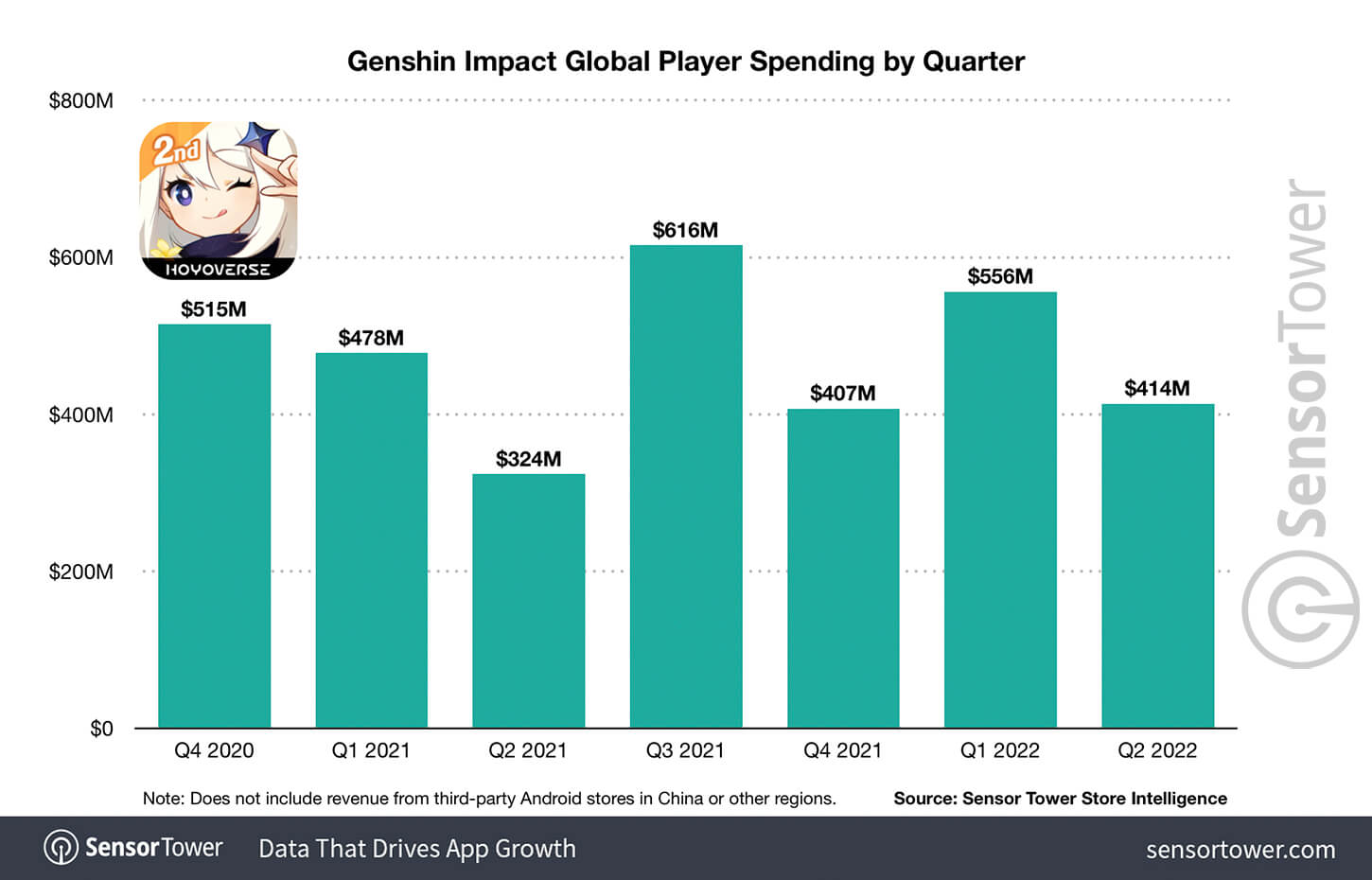 China ranked as the No. 1 market for player spending in the mobile version of Genshin Impact during its first two years, generating $1.2 billion, or approximately 33 percent of total revenue, via iOS alone (Sensor Tower does not track spending on third-party Android stores, such as those found in China). Japan, meanwhile, ranked No. 2 with about 24 percent of revenue, while the United States ranked No. 3 with 17 percent.

The App Store accounts for the majority of Genshin Impact’s global player spending, accumulating approximately 68 percent of global revenue. Google Play, meanwhile, accounted for 32 percent. Outside of China, however, there is a much more even revenue split, as Google Play accounts for 48 percent of international player spending, while the App Store makes up 52 percent.

After generating $2 billion in its first year, Genshin Impact continues to be one of the world’s most lucrative games and is the most significant new IP launch on mobile since Honor of Kings, while seeing an even greater influence on the international stage. Developer miHoYo has taken the learnings from its past games such as Honkai Impact 3rd, which itself has now surpassed $1 billion in global player spending, and applied them to huge success. Combining an effective gacha monetization system with an almost industrial scale live operations strategy supplying regular content updates and popular new characters, miHoYo has kept Genshin Impact relevant and bucking the recent trends of the rest of the industry.