Following its worldwide release, the title took 171 days to generate its first $1 billion on mobile, not including spending through third-party Android stores. It then took an extra 195 days to accumulate a further $1 billion–resulting in the title picking up $2 billion in its first year alone. Genshin Impact crossed the $3 billion milestone 185 days later, meaning the game has averaged revenue of $1 billion every six months, making it one of the most successful mobile games of all time.

Analyzing the title using Sensor Tower’s new Monetization fields, in Q1 2022 it ranked as the No. 1 revenue generating Gacha-based mobile title globally, above titles such as Lineage W from NCSOFT and Uma Musume: Pretty Derby from Cyberagent. Genshin Impact regularly implements significant updates, introducing new gameplay features, areas to explore and characters to obtain, resulting in large spikes in revenue on average every three weeks. Since its launch, the title has ranked as the No. 3 revenue generating mobile title globally, behind Honor of Kings from Tencent at No. 1 and PUBG Mobile–localized as Game For Peace in China–also from Tencent, at No. 2. 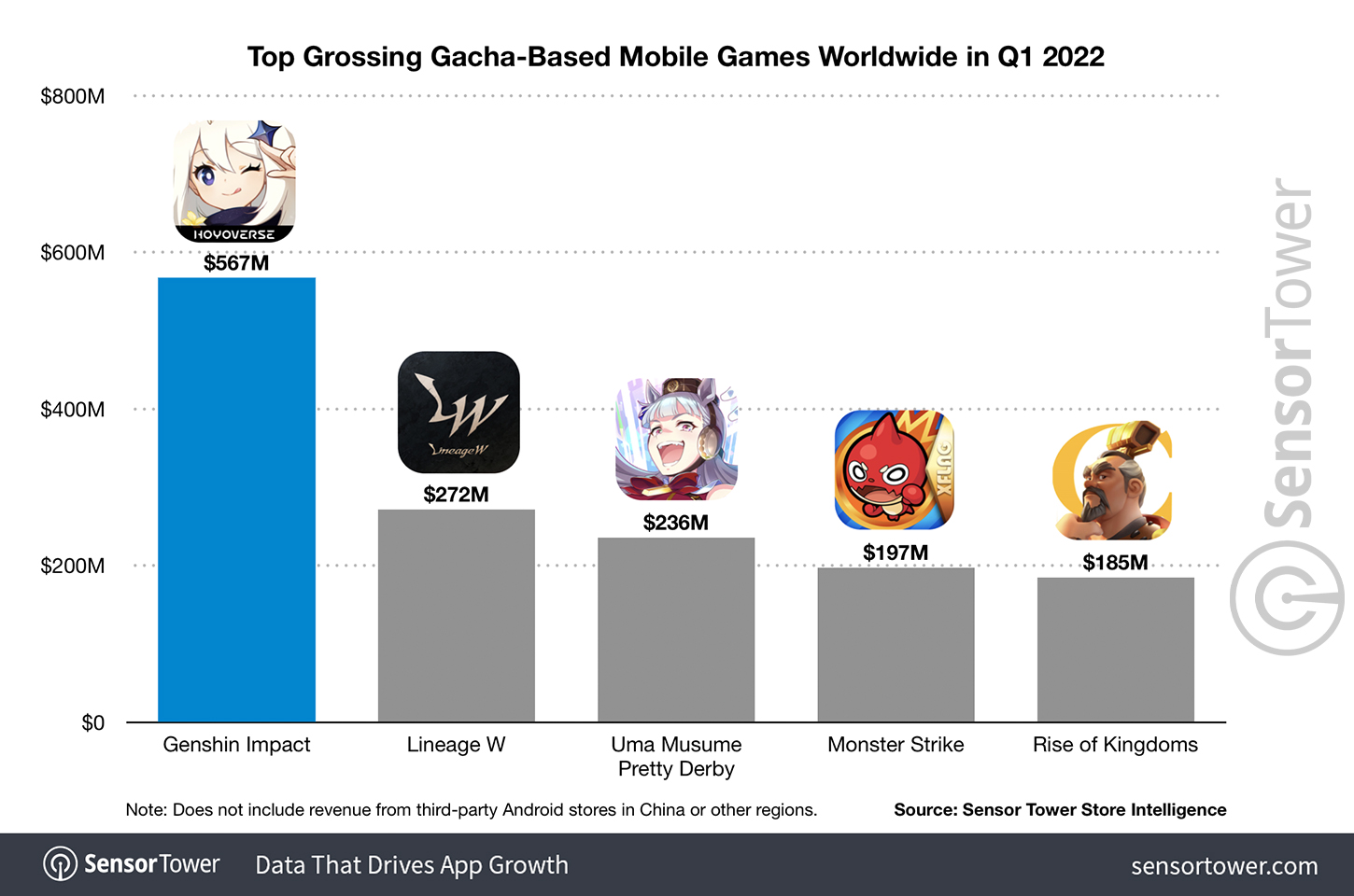 China ranks as the No. 1 revenue generating country since Genshin Impact’s global launch, generating $973.3 million to date, or 30.7 percent of global player spending, on iOS alone (Sensor Tower does not track spending on third-party Android stores, such as those found in China). Japan ranks No. 2 with 23.7 percent of lifetime revenue, while the United States ranks No. 3 with 19.7 percent. While the title can be considered a global success, Genshin Impact generates most of its revenue in Asia, which accounts for close to 70 percent of total player spending to date.

The App Store makes up the lion’s share of player spending, accounting for 65.7 percent of total revenue, thanks in large part due to revenue from iOS in China. Google Play, meanwhile, accounts for 34.3 percent of total player spending. Outside of China, the share of revenue is much closer, with the App Store accounting for 50.5 percent, while Google Play makes up 49.5 percent.

Genshin Impact continues to be one of the world’s most lucrative mobile games, having consistently brought in $1 billion every six months on average. Players remain highly engaged, with average worldwide monthly active users in Q1 2022 up by approximately 44 percent year-over-year. Its success has been powered by miHoYo’s impressive live ops strategy, which has put the title well on track to hit the $4 billion landmark later this year.