Launched gradually across territories from October 2020, the title has since become one of the world’s top mobile MOBAs. According to Sensor Tower Game Intelligence, League of Legends: Wild Rift ranked as the No. 2 revenue generating MOBA during H1 2022, accumulating approximately $218 million. It ranked behind Honor of Kings from Tencent at No. 1, which generated $1.4 billion during the period, and above Brawl Stars from Supercell, which picked up $149.5 million. All of these titles have links to Tencent, which has acquired both Riot Games and Supercell.

League of Legends: Wild Rift is Riot Games’ third and most successful foray into the mobile sector. The company’s first mobile game, Auto Chess title Teamfight Tactics, released in March 2020,  has picked up $299 million to date, while Card Battler Legends of Runeterra, launched in April 2020, has generated more than $24 million. Combined, Riot Games’ mobile portfolio has accumulated $828 million in the 16 months after it entered the space. The company’s next mobile title is set to be Valorant, based on its hit PC shooter of the same name. 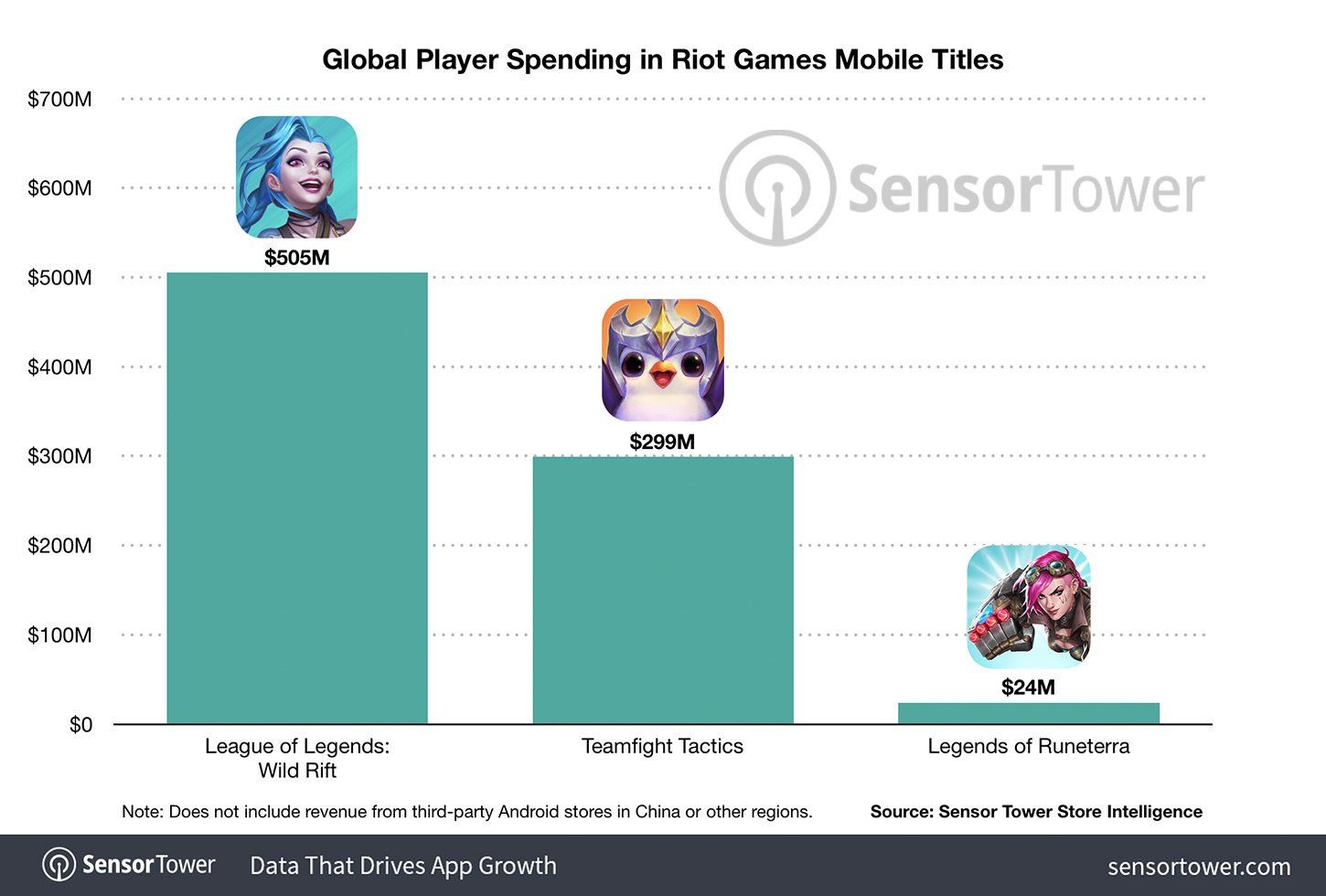 China ranks as the top revenue generating country for League of Legends: Wild Rift, where it is published and operated by Tencent. To date, the title has picked up $364.6 million in the country (App Store only), accounting for 72.2 percent of total player spending. Its China launch on October 8, 2021 sparked the title’s best month ever for revenue, picking up approximately $79 million worldwide. The United States ranks No. 2 for global player spending at 6.8 percent of total lifetime revenue, while South Korea ranks No. 3 at 3.7 percent.

After 16 months since it first entered the market, Riot Games is closing in on $1 billion in player spending from its portfolio of three mobile games, all built upon its globally popular League of Legends IP. Much of the company’s success has come in China, which accounts for $614.3 million, or 74.2 percent, of total revenue to date. Both League of Legends: Wild Rift and Teamfight Tactics–which are operated by Tencent in China–have proven to be hugely popular in the country. It’s a unique position for a U.S. publisher, finding most of its success in the East, rather than in the West, generating approximately $214 million from player spending outside of China by comparison. It shows both the power of the IP in China, and the important backing of mobile publishing powerhouse Tencent.