As global consumer spending in mobile apps is projected to again reach new heights in 2021, Sensor Tower Store Intelligence data reveals that the number of publishers seeing their first $1 million or more in annual net income this year has nearly doubled since 2016.

Slightly more than 900 publishers worldwide are projected to surpass this significant milestone across the App Store and Google Play in 2021, up close to 91 percent over 2016's total of 475. The number of iOS publishers alone exceeding this mark will reach 581, up 87 percent from 310 in 2016. Google Play will see a similar trajectory, growing its first-time million-dollar-plus publishers from 165 in 2016 to 325 this year. This represents 97 percent growth, surpassing the App Store's performance in this regard by 6 percentage points.

While consumer spending has continued to see positive growth, the number of publishers surpassing the $1 million net income milestone for the first time this year is expected to decline year-over-year in 2021. This is likely due the result of consumer behavior continuing to normalize in the wake of an outsized year for new app downloads in 2020. Based on our install estimates, consumers experimented with fewer new apps this year than last, which saw adoption driven to staggering levels at the height of the COVID-19 pandemic.

The App Store saw 636 publishers reach or exceed $1 million in annual net revenue for the first time in 2020, a figure that will decline by nearly 9 percent in 2021. Google Play had 367 publishers cross that milestone last year, placing this year's total 11 percent below that figure. 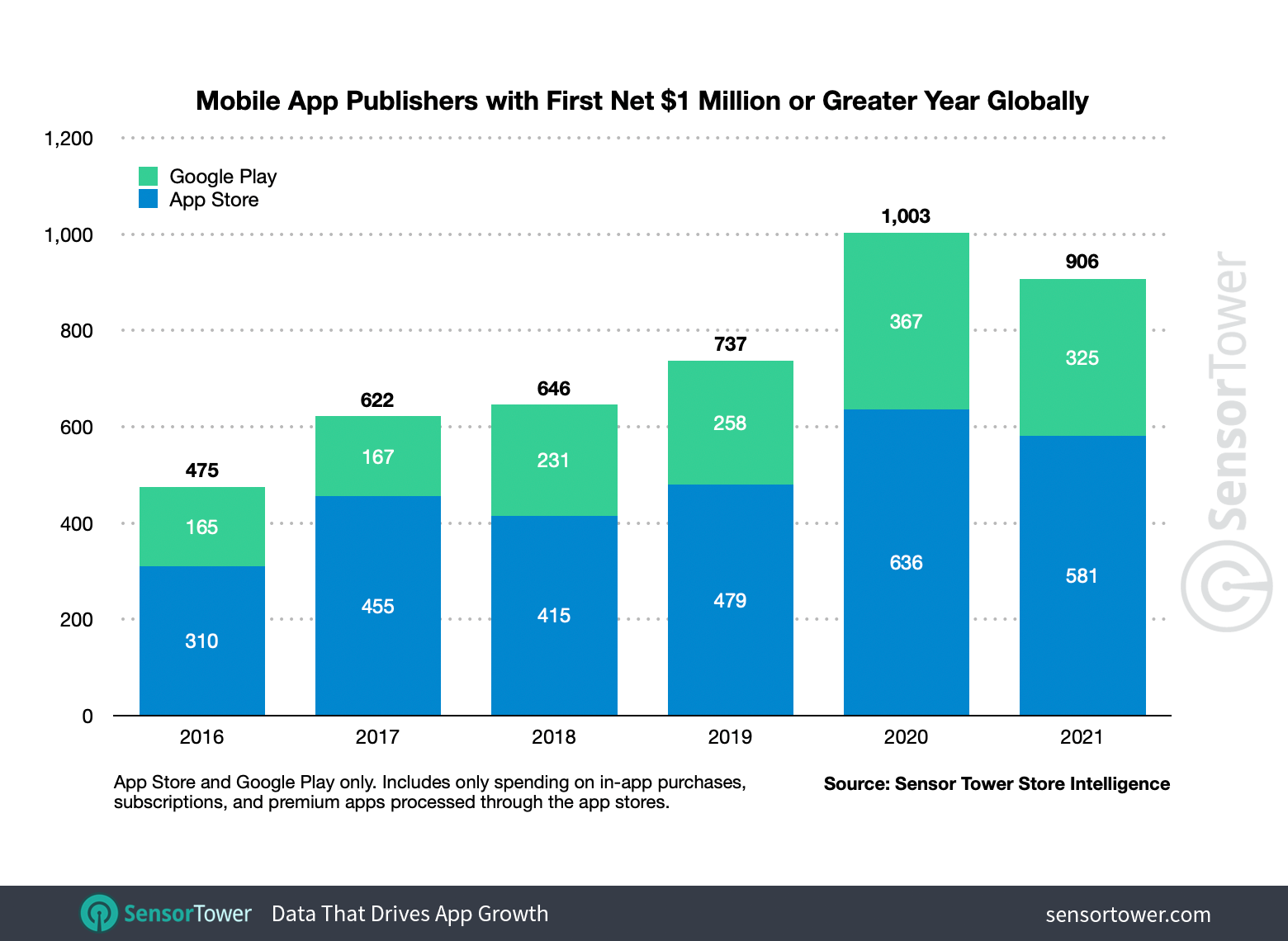 Although more publishers have historically earned their first $1 million or more in net revenue on the App Store each year, the gap between Apple's marketplace and Google Play is shrinking. The delta between the two was at its peak in 2017 when the App Store produced 2.7 times the number of Google Play, while this year Apple's store will produce about 1.8 times more first-time $1 million-plus earning publishers than Google's.

This trend reflects the increased velocity in overall consumer spending on Google's platform; in 2021, consumers are projected to spend $47.9 billion on Google Play, up 23.5 percent Y/Y. That is nearly 6 percentage points higher than the 17.7 growth Apple's store is expected to see this year as iOS consumer spending reaches an estimated $85.1 billion.

Mobile game publishers have historically represented the largest share of first-time million-dollar earners on the App Store. Beginning in 2019, the Social Networking and Entertainment categories have jostled for the Nos. 2 and 3 spots, and this will remain true in 2021. Sensor Tower projects that there will be 185 mobile game publishers crossing the milestone this year, representing about 32 percent of the platform's total new million-dollar-plus earners. Social Networking will produce 62 publishers, representing 11 percent, while Entertainment will see 41 publishers, or about 7 percent. 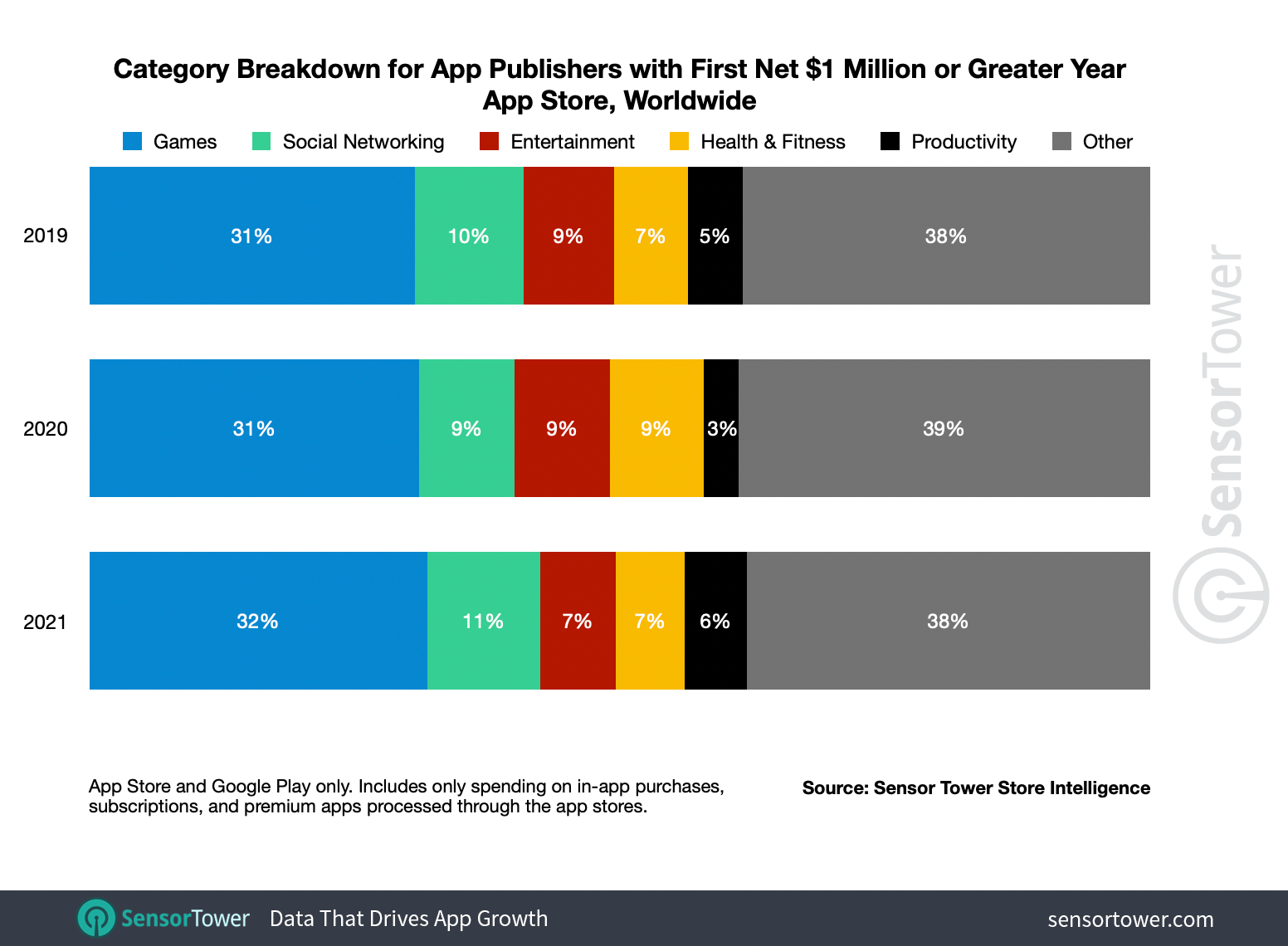 In terms of categories that will see the most Y/Y growth in these publishers, however, Productivity and Sports are due to experience the largest changes in 2021. Last year, 21 publishers in the Productivity category reached the $1 million net revenue milestone for the first time, representing about 3.3 percent of all to do so. This figure will climb to 34 this year, accounting for nearly 6 percent. The Sports category will grow from five in 2020 to 18 in 2021, or about 3 percent.

Returning to Games, the category's share has diminished 31 points since 2016 when it represented close to 63 percent of first-time million-dollar publishers on iOS. This is partly due to the addition of new categories over time, as well as the increased success of publishers in non-game categories.

As on the App Store, mobile game publishers on Google Play historically represent the lion's share of new publishers reaching $1 million or more in a given year. In 2021, 139 publishers are projected to surpass that milestone, or about 43 percent of all publishers to do so for the first time. The Social category will be No. 2 with 36 publishers, or about 11 percent of the total, while Entertainment will rank No. 3 with 32, or about 10 percent.

The number of Communication app publishers in this year's cohort had the most growth from 2020 at about 84 percent, climbing from six to 11 for about 3.4 percent of the total. 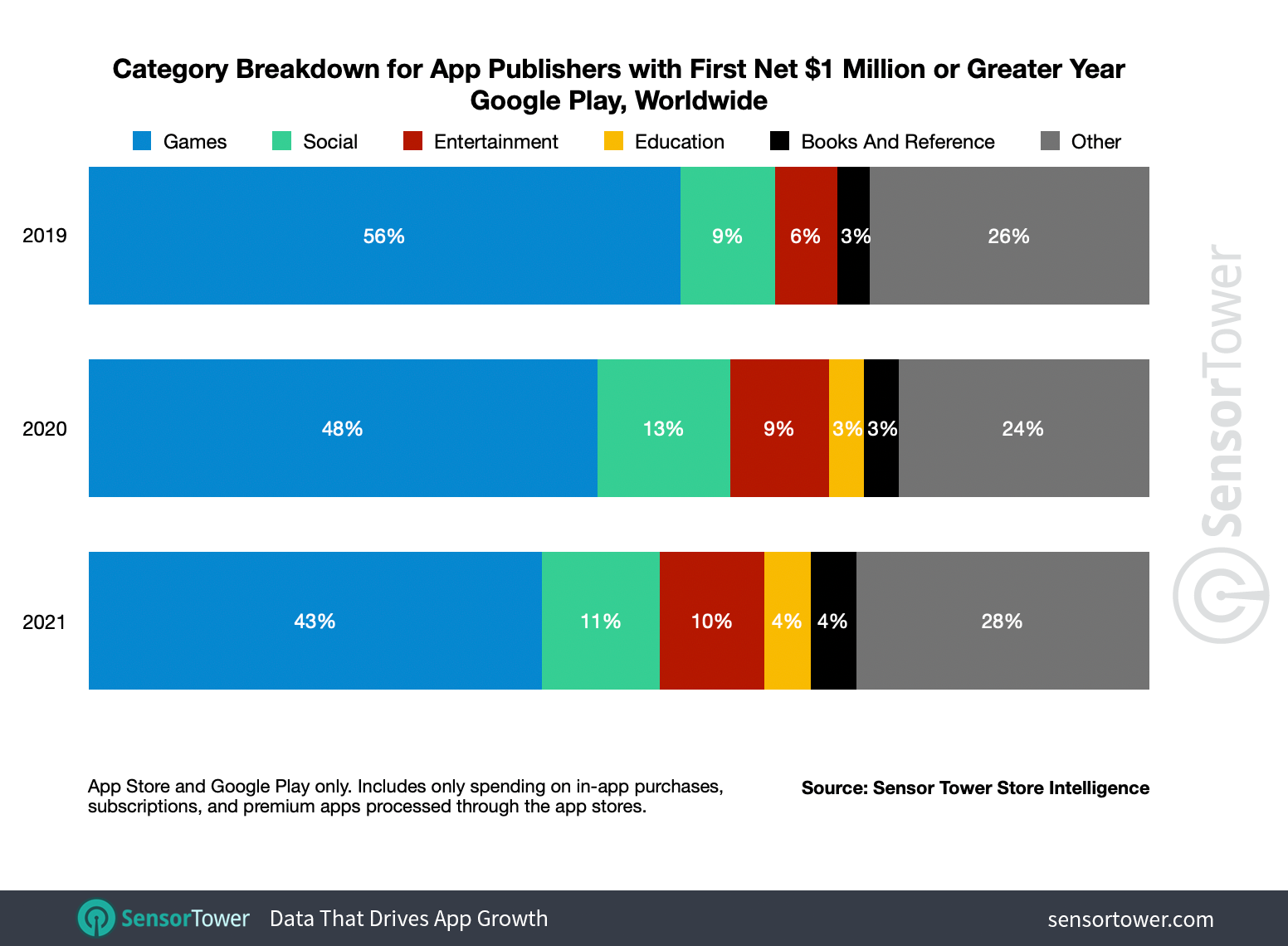 Google Play, like Apple's platform, has seen its annual share of new $1 million plus mobile game publishers decline over the years. In 2016, 124 of these represented about 75.2 percent of all new million-dollar earners. This share shrank to 42.8 percent in 2021 with 139 publishers.

The United States is projected to mirror worldwide trends with new million-dollar publishers falling Y/Y from 446 in 2020 to 408, down nearly 9 percent. Apple's U.S. marketplace will see 274 publishers meet or exceed the mark, down 10 percent Y/Y, while U.S. Google Play is projected to produce 134, down 6 percent Y/Y. The gap between the App Store and Google Play in the U.S. is also shrinking, but Apple's platform still maintains a healthy lead, generating twice as many new net $1 million earners each year. 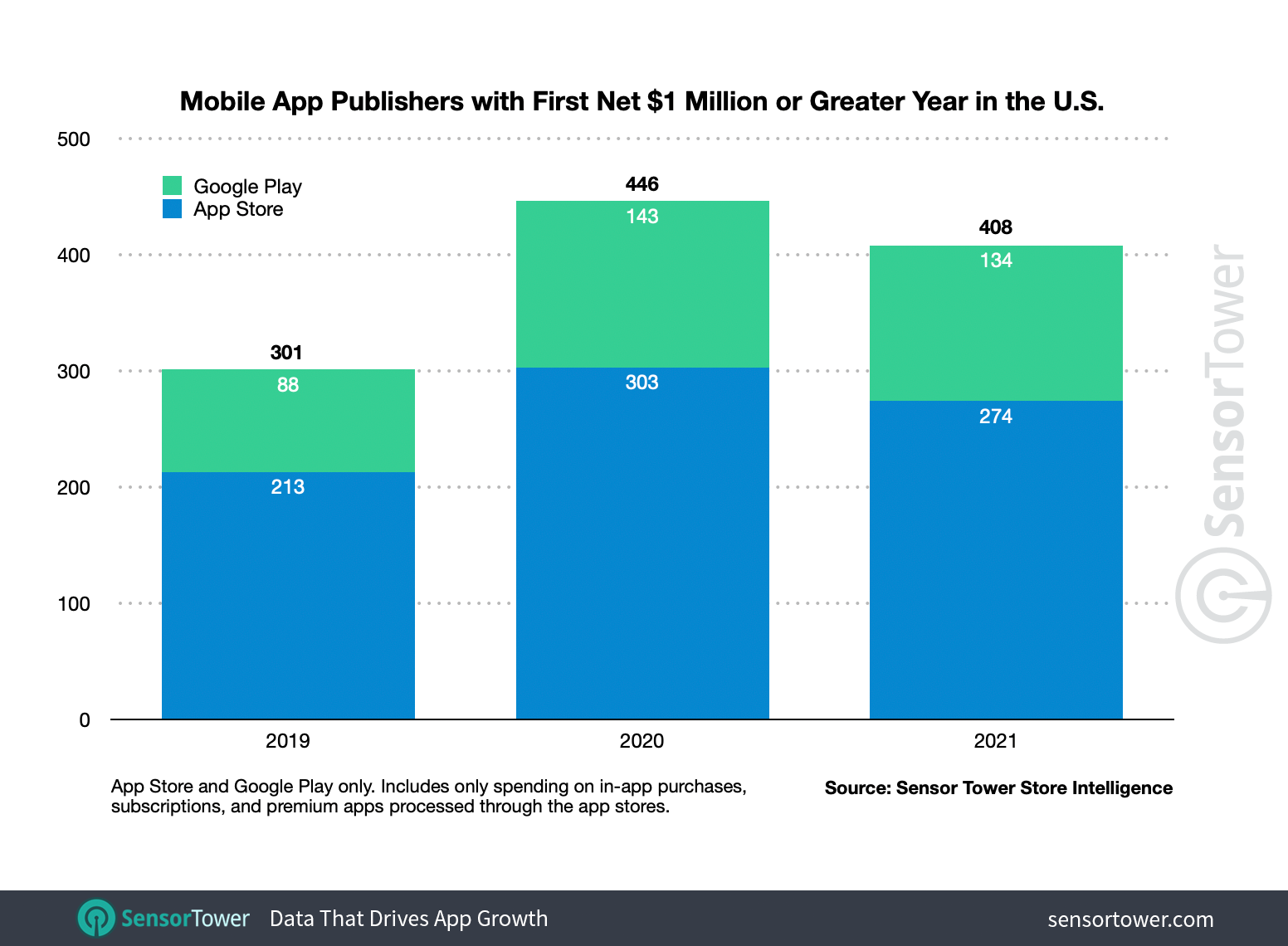 Mobile game publishers also represent the largest percentage of first-time million-dollar earners in the U.S., with 60 slated to hit that milestone on the U.S. App Store, or about 22 percent of its total, and 62 publishers on domestic Google Play, or about 46 percent of its overall count.

The Tide Will Keep Rising

Apple's App Store still has a commanding lead in terms of producing new million-dollar-plus publishers each year. Consumer spending on Google Play, however, is growing at a faster clip, which could contribute to a continued tightening of the gap between the two platforms.

Even bigger shifts are coming to the mobile market, however, with changes in the share of revenue taken by platform owners potentially rolling out next year along with more third-party payment options. Time will tell how this will affect publishers on both Apple's and Google's platforms and which developers will be able to reap the benefits.