The mobile landscape is finding its new normal after the seismic shift in consumer behavior seen in 2020, and Sensor Tower Usage Intelligence data reveals that the number of unique apps used on mobile devices in the United States each month has returned to pre-pandemic levels. Despite this, some persistent trends have begun to emerge and the type of apps interacted with have shifted over time.

Unsurprisingly, the number of apps opened on U.S. smartphones and tablets each month ballooned in 2020. Our analysis found that these devices interacted with an average of nearly 50 apps in 2020. This was up from almost 47 in 2019, driven by mobile devices being turned to for entertainment, work, and social interactions during the onset of the pandemic.

As public spaces began reopening in 2021, the number of apps used each month shrank—not only in comparison to the outsized mobile usage in 2020, but also 2019. U.S. devices averaged about 46.5 apps used each month in 2021, declining 6.3 percent year-over-year and 1 percent when compared to 2019. Again, this doesn't necessarily signal a downward trend in app usage, but rather a return to roughly the same trajectory we were seeing before the pandemic, spurred by the continuing normalization of daily life. 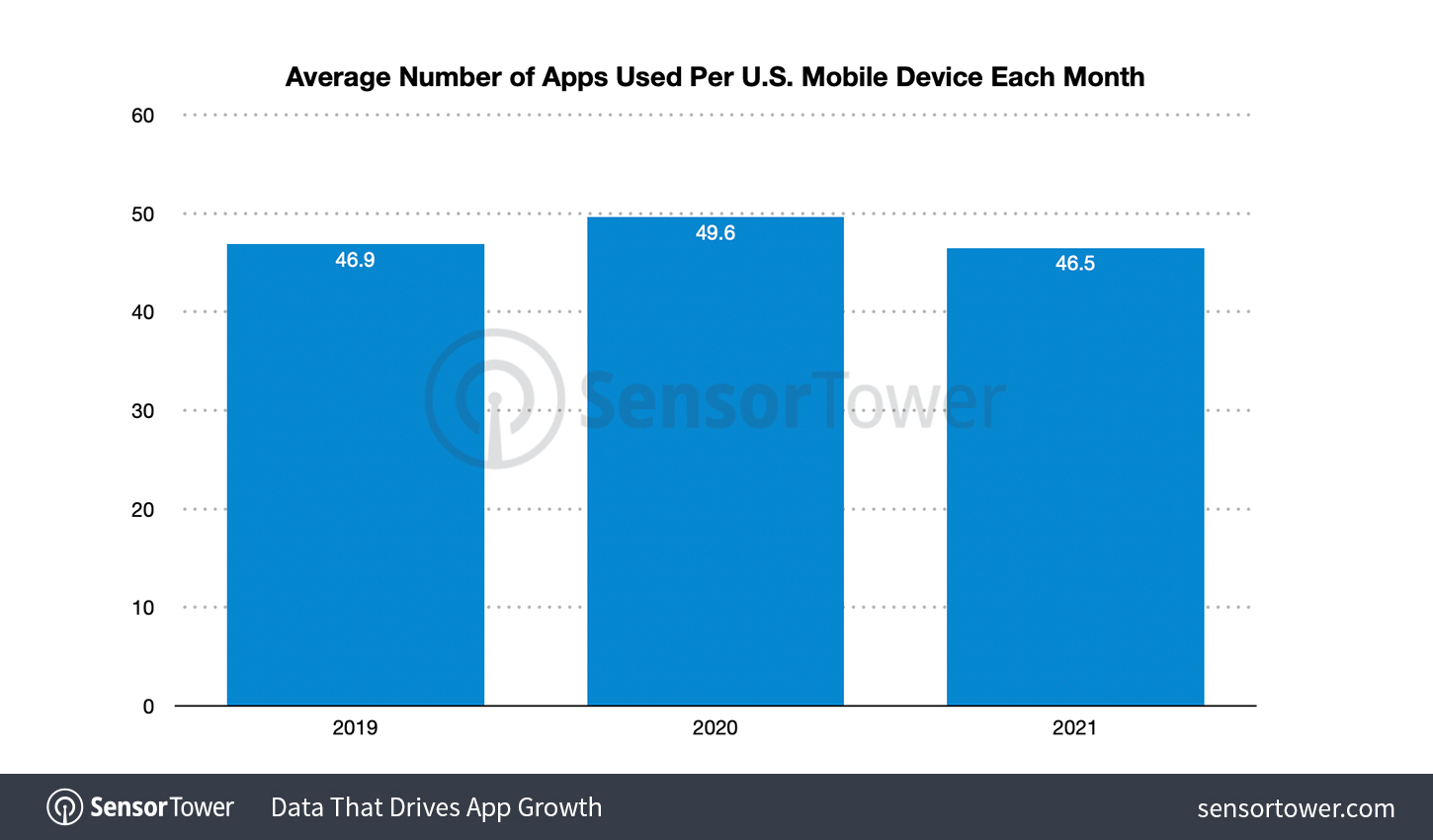 Although U.S. devices averaged a similar number of apps used per month in 2021 when compared to 2019, the types of apps differed. In 2021, the number of Medical apps interacted with grew 52.2 percent from 2019, while Business apps grew nearly 49 percent and Finance apps grew 32.5 percent. 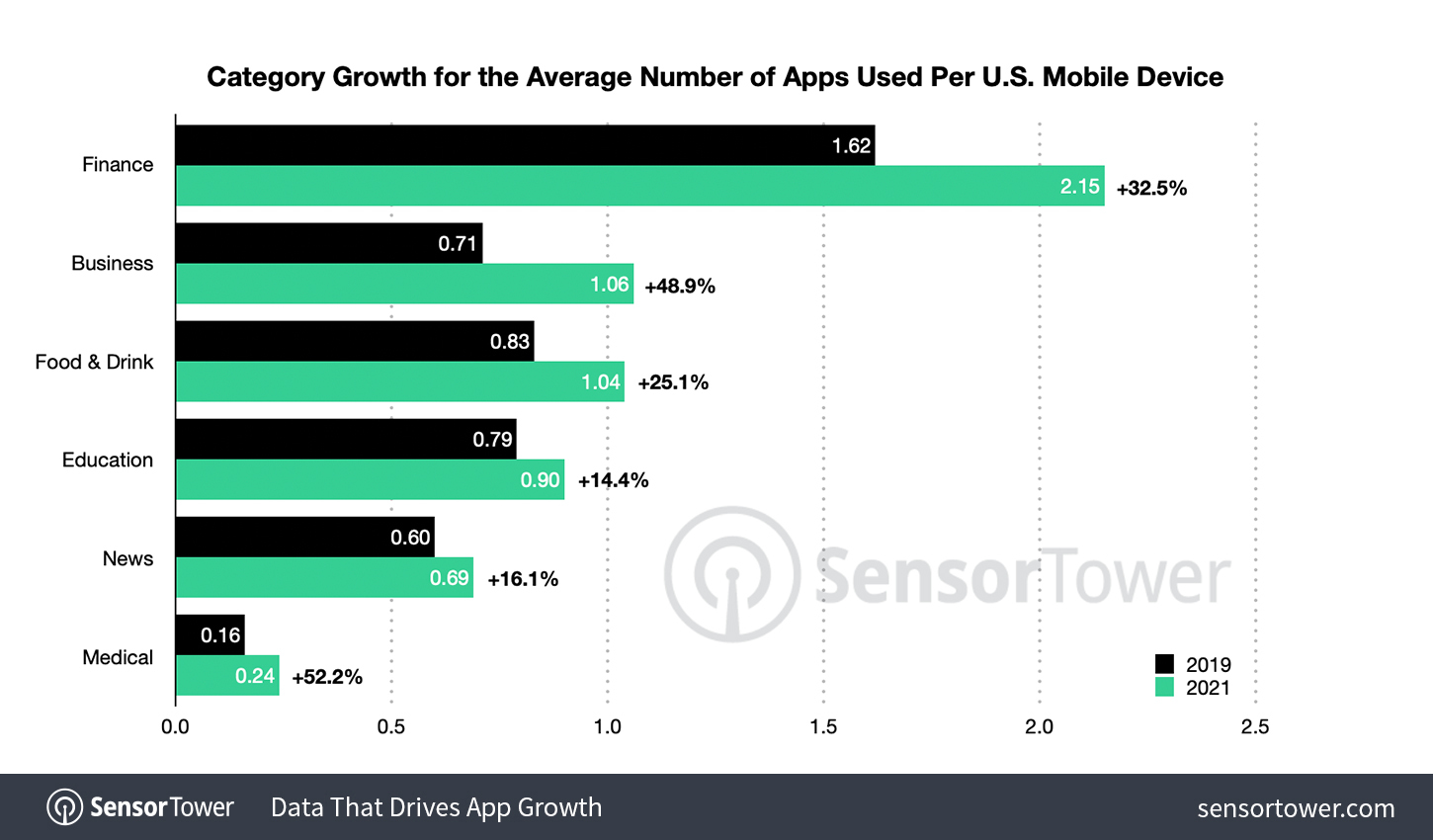 Compared to other categories, more unique mobile games are opened on U.S. devices each month. In 2021, an average of 15.6 unique games were opened each month, with the Utilities and Social Networking categories coming in a distant second with 3.7 unique apps each.

However, the number of mobile games opened each month has declined, with 2021's average declining nearly 8 percent from almost 17 games per month in 2019. In comparison, non-game app usage grew nearly 3 percent when comparing the two periods to almost 31 per month on average. That substantial decrease from 2020 came following a significant expansion of mobile game downloads early in the pandemic, during which more of these apps were tried in the service of discovering favorite games and genres. 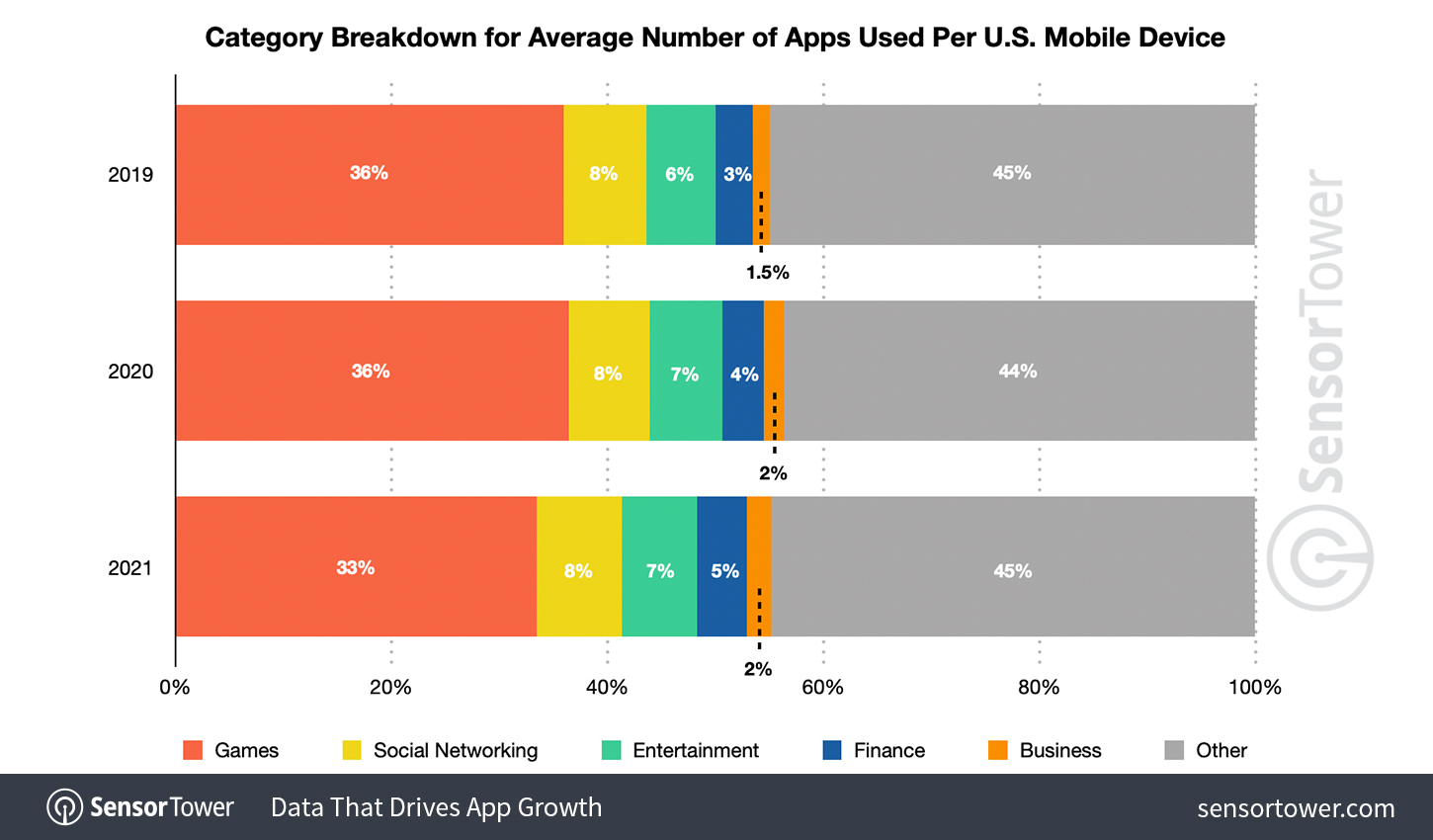 Apps are Everywhere and Everything

2021 was a year of meme stocks, NFT drops, and COVID-19 home-testing kits, and Sensor Tower's Q4 2021 Data Digest is a deeper dive into last year's trends. One thing is clear, though: The types of mobile apps being used are more diverse than ever, even if the number being interacted with has decreased.