Sensor Tower is rounding out our overview of the mobile app ecosystem in Q1 2017 with a look at its top app publishers by revenue and downloads in the United States, having previously ranked its top mobile games and non-game apps. Read on for our publisher rankings and analysis of their revenue contribution for the quarter.

The App Store and Google Play generated approximately $3.76 billion in gross revenue in the U.S. last quarter, according to our Store Intelligence estimates. Of this amount, approximately 67 percent was generated by the top 10 publishers, or about $2.52 billion. 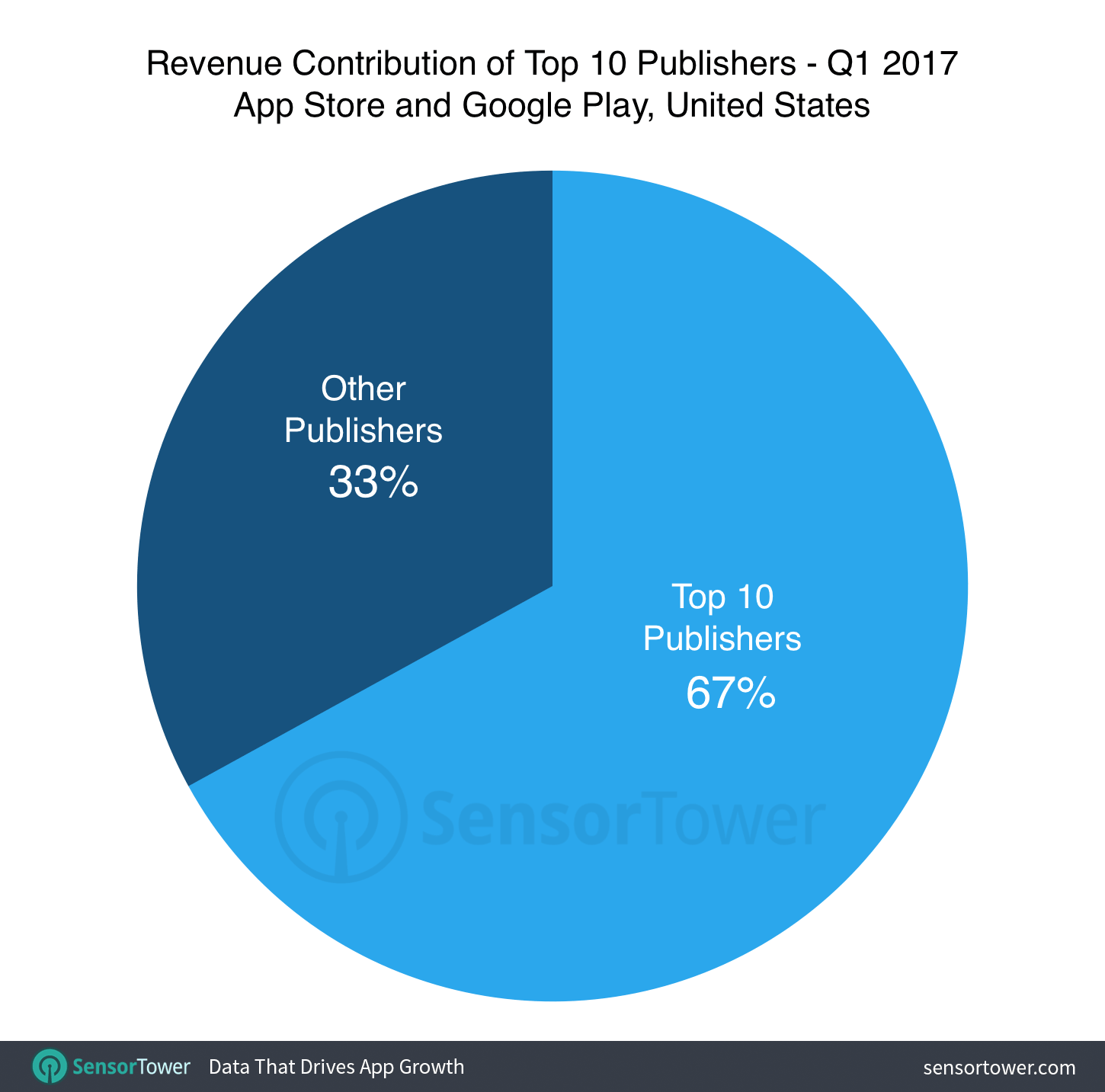 Top Publishers by Revenue and Downloads

The 10 largest publishers by revenue in Q1 2017, which contributed the above sum, were (not surprisingly) dominated by game makers. In fact, as the ranking below shows, seven of the top 10 highest grossing publishers for the quarter across both stores were games-exclusive. (App icons indicate the publisher's highest-grossing title for the quarter.) 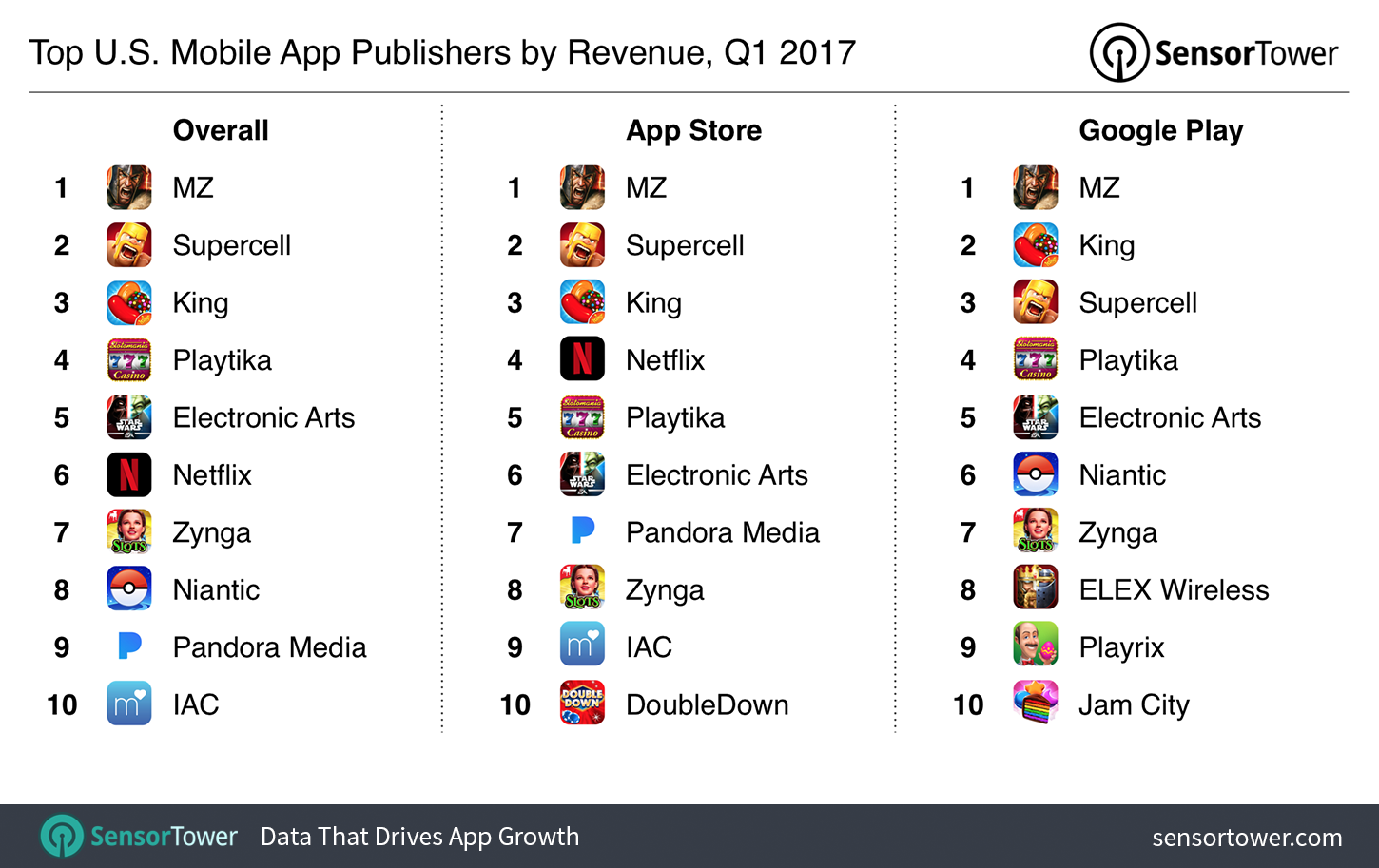 Game of War and Mobile Strike publisher MZ ranked at No. 1 in terms of revenue for the quarter overall, as well as on both the App Store and Google Play. Supercell, whose Clash of Clans remained its top-earning app, ranked No. 2 overall and on the App Store, but came in at No. 3 on Google Play after King—whose Candy Crush Saga continued to be its highest earning app more than four years after its November 2012 launch.

Of the three non-gaming publishers in the overall top 10, Netflix and Pandora each derived their revenue from a single app. IAC owns multiple brands, including Match.com, OkCupid, Expedia, Vimeo, and Apalon. Netflix, which owns the top-grossing non-game app of Q1 2017, was the highest-earning non-game publisher overall and on the App Store, but failed to reach the top 10 on Google Play, where all 10 top publishers were games-exclusive. 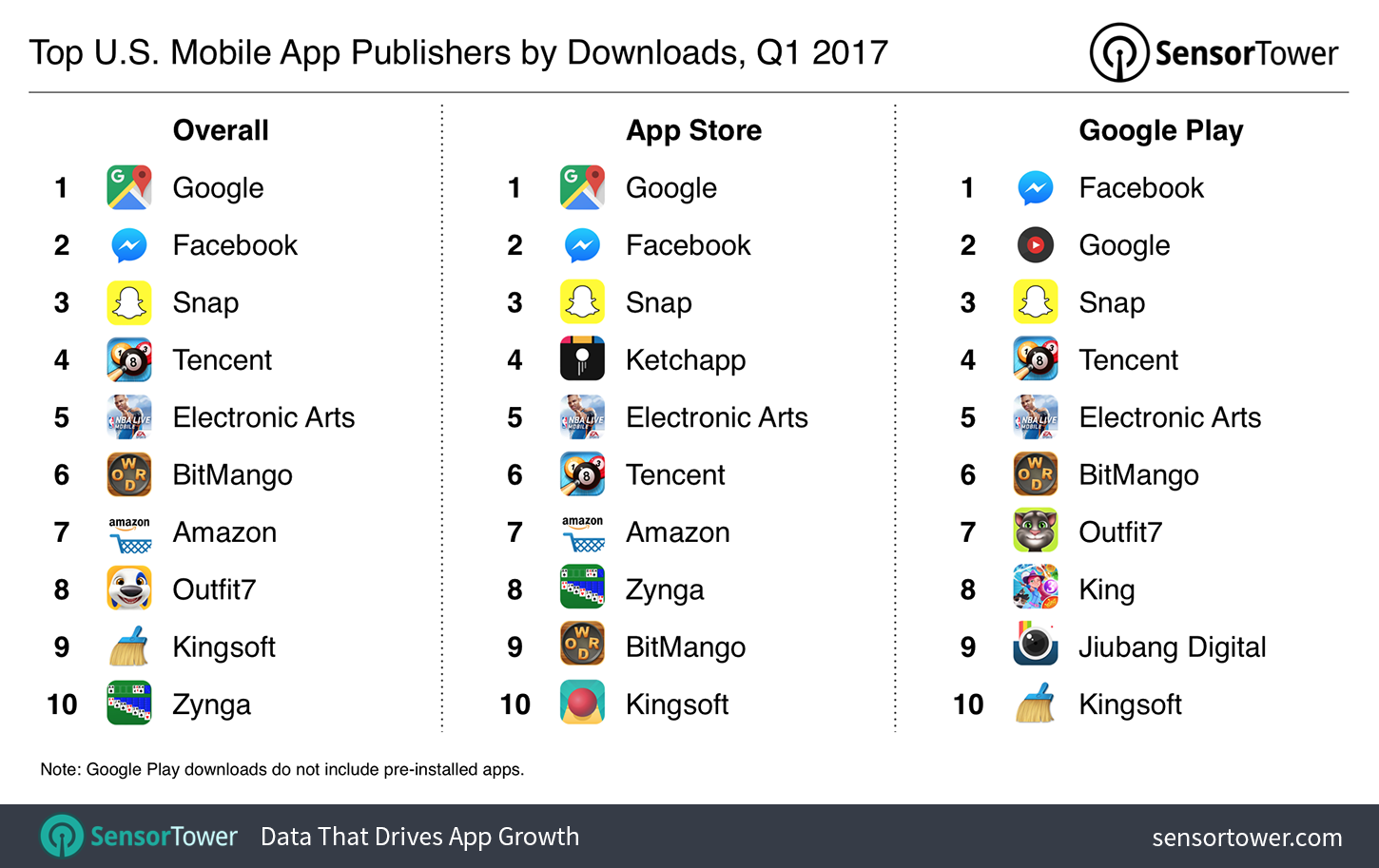 In terms of overall downloads, Google came in first, with Google Maps being its top-downloaded app overall and on the App Store. Its most-installed Google Play app was YouTube Music (as that ranking does not count pre-installed Android apps).

Facebook took second with Messenger as its top downloaded app overall and on each individual store. Snapchat ranked No. 3 across all three rankings.

Compared to the revenue rankings, there was an even division of mobile game to non-game-centric publishers in the overall publisher ranking by downloads at five representatives each.

Our upcoming Q1 2017 Store Intelligence Data digest will include rankings of the top publishers worldwide, along with analysis of the quarter's most significant app ecosystem events, trends, top categories, and more. If you'd like to be notified when it's released, submit your email through the form to the right of this post.