Worldwide gross revenue from in-app purchases and subscriptions for non-game apps increased by 67 percent in 3Q17 from the year-ago quarter, reaching $2.8 billion according to Sensor Tower Store Intelligence estimates. In this report, we will present the quarter's top apps by revenue and downloads, in addition to our analysis of year-over-year Q3 revenue and download growth on the App Store and Google Play.

As reflected in the chart below, worldwide consumer spend in non-gaming apps increased from approximately $1.7 billion during 3Q16, with both stores posting impressive YoY gains. 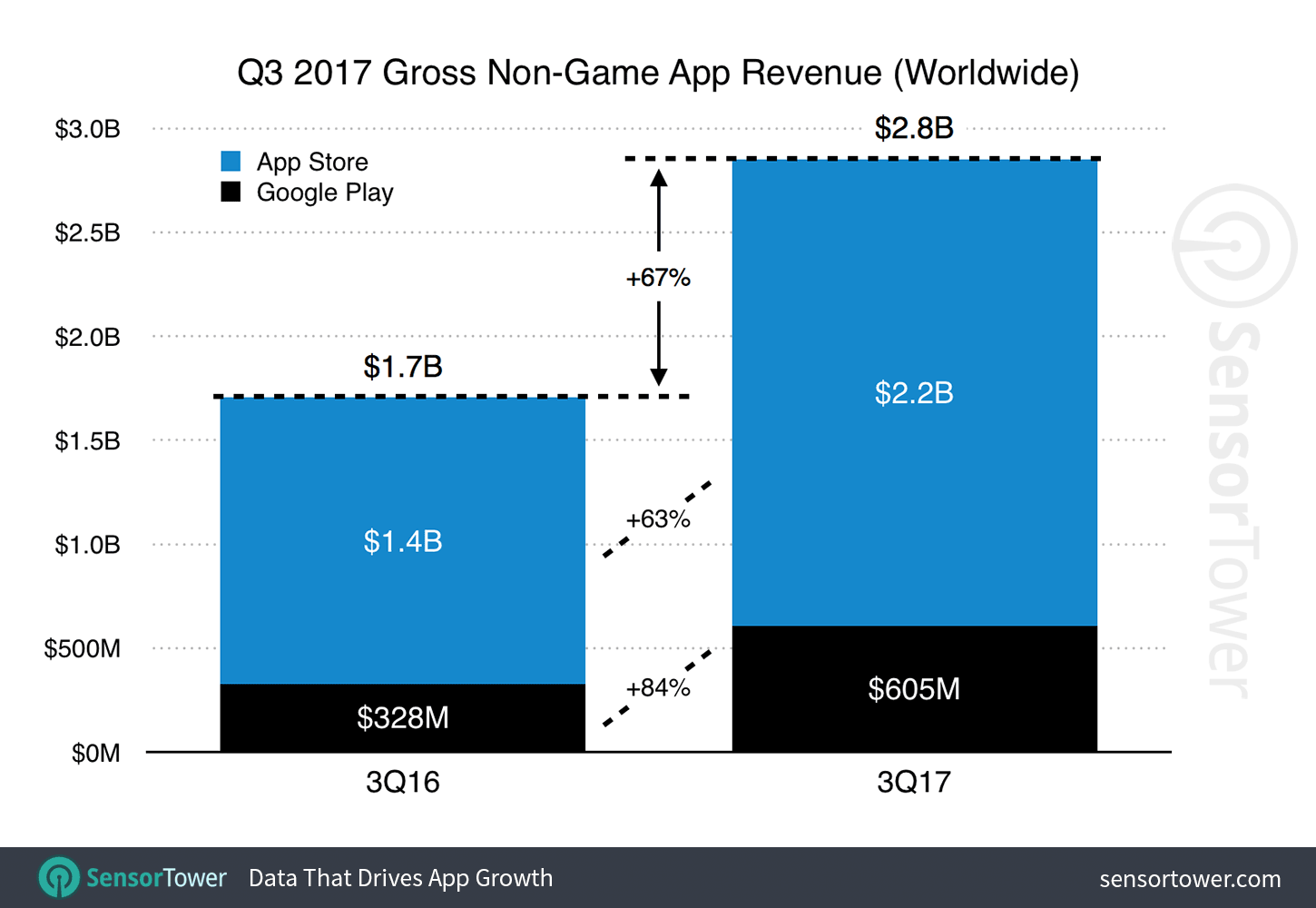 Maintaining its trend from the past several quarters, revenue growth for Google's Play Store outpaced Apple's App Store at 84 percent YoY compared to 63 percent. Google Play spending grew to approximately $605 million worldwide compared to $328 million in the year-ago quarter, while spending on the App Store, which remains more than 3.6x Google Play, grew from $1.4 billion to $2.2 billion YoY.

By comparison, overall YoY revenue growth for 2Q17 was 57 percent, with consumer spending of approximately $2.43 billion. 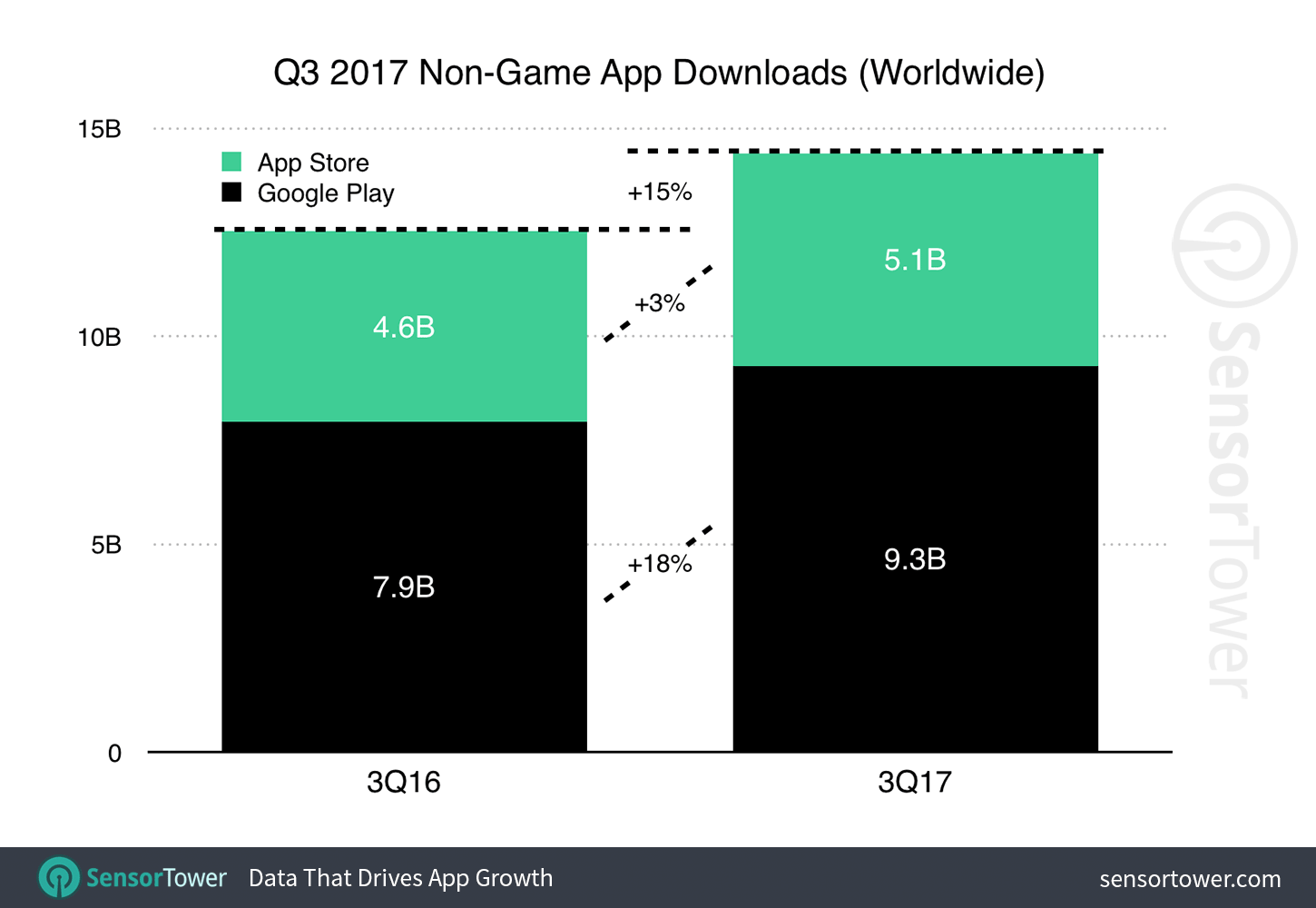 Google Play's download growth versus the year-ago quarter substantially outstripped the App Store at 18 percent, compared to 3 percent for Apple's Platform. Downloads from Google Play totaled 8.6 billion, up from 7.3 billion the year before, compared to the App Store's modest increase from 4.4 billion to 4.6 billion over the same period. 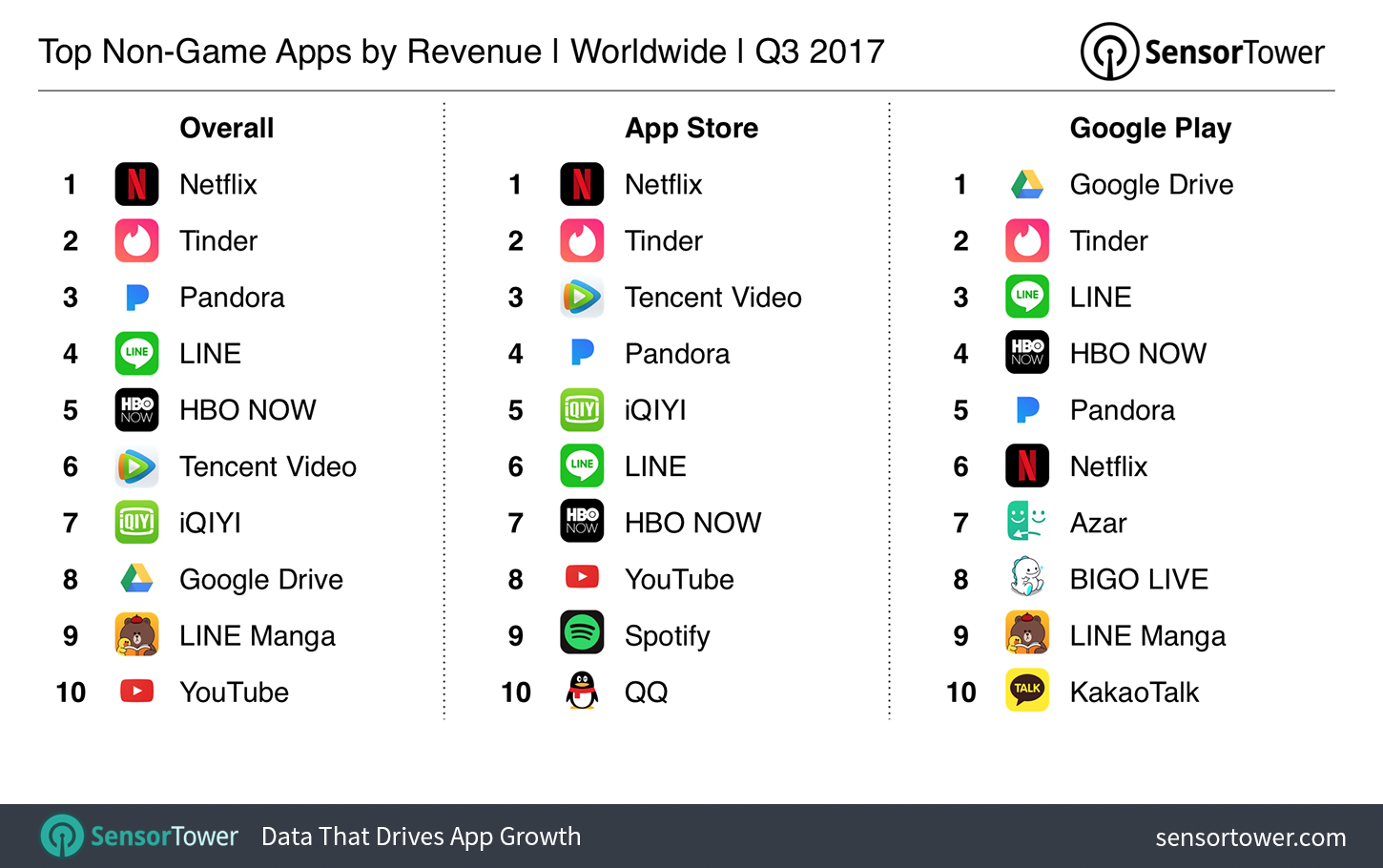 Netflix retained its No. 1 ranking for both overall worldwide revenue and App Store income, while Google Drive was once again the top earning app on Google Play. A notable mover for the quarter was Tencent Video, which entered the quarterly top 10 at No. 6 overall and climbed from No. 10 in 2Q17 on the App Store to No. 3 on Apple's platform, as Chinese users continue to increase their spending in the country's leading video streaming app. 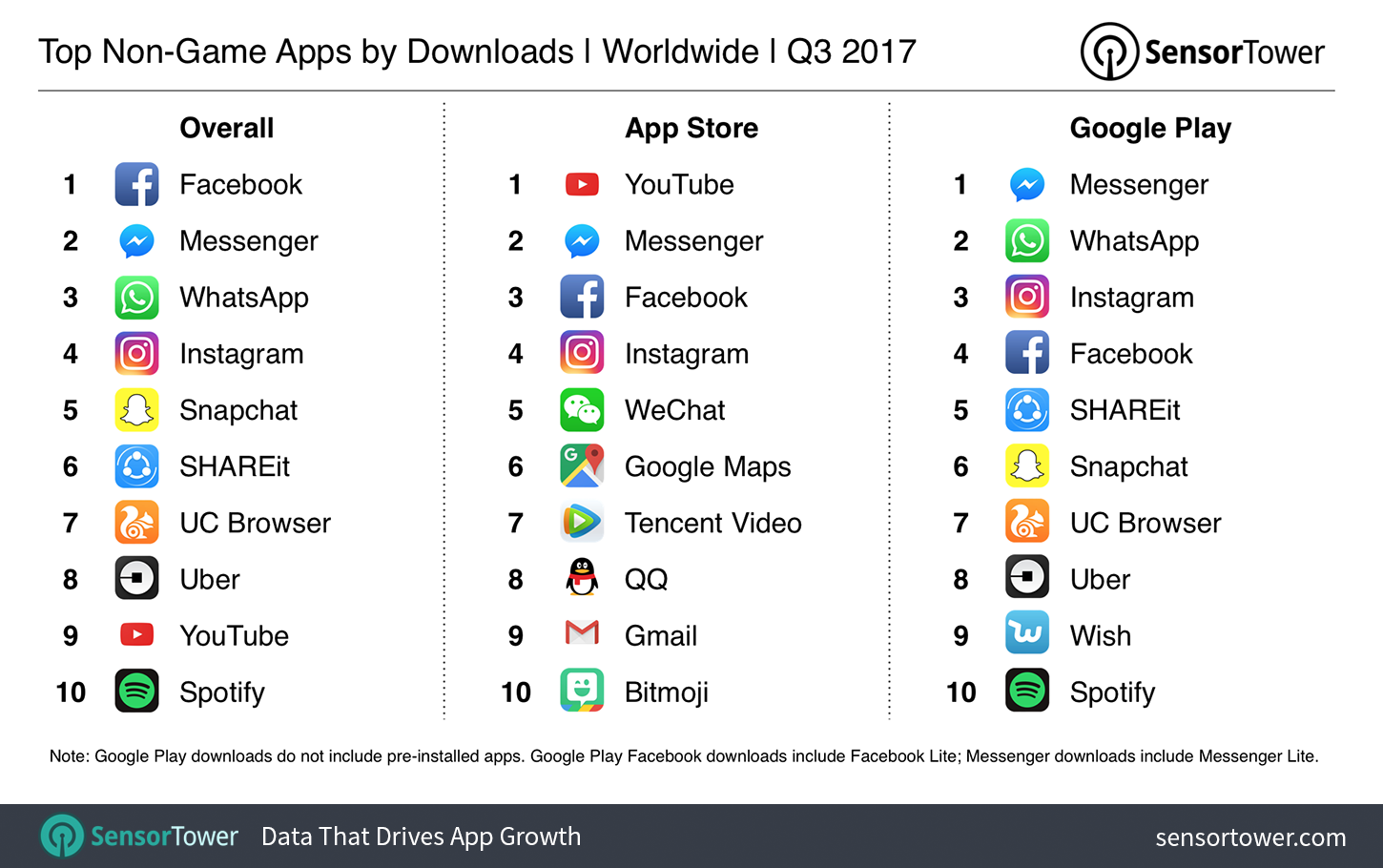 Facebook recaptured its No. 1 ranking for worldwide downloads from WhatsApp, which dropped to No. 3 overall. Still, Facebook continued to dominate the top of the chart, owning four of the top five apps: Facebook, Messenger, WhatsApp, and Instagram, the latter of which continued to edge out rival Snapchat at the No. 4 position.

On iOS, YouTube shot to the top of the chart, displacing 2Q17's top app, WhatsApp. Some other notable changes occurred on the App Store chart, most significantly the disappearance of Snapchat, which had ranked at No. 8 in 2Q17, and the arrival of Tencent Video at No. 6.

Shopping app Wish claiming a spot at No. 9 on the Google Play downloads chart was that platform's most significant alteration to its top 10 over last quarter. 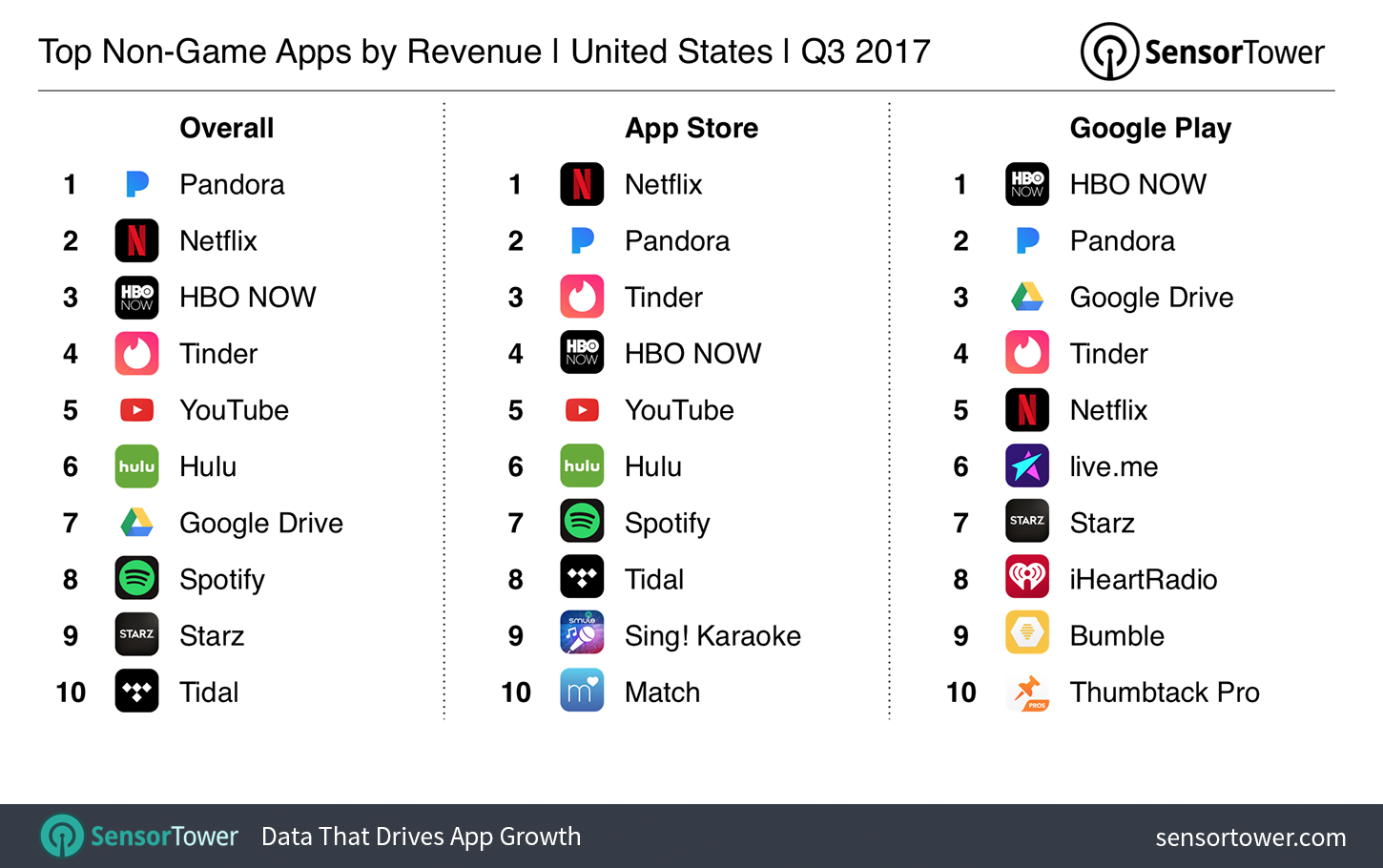 Looking at U.S. revenue for the quarter, the big news came in the form of Pandora topping the overall ranking for the first time since 3Q15. In doing so, it broke Netflix's three quarter hold on the top position. Pandora revenue has been riding high on the launch of the service's Pandora Premium on-demand tier in March, which resulted in Q3 spending of more than $80 million in the app across the App Store and Google Play, an approximate increase of 142 percent from 3Q16's estimated $35 million in gross revenue for the app.

Elsewhere, HBO NOW's revenue ranking was buoyed by season seven of Game of Thrones. Also in the streaming space, the Starz app made its first appearance in our quarterly U.S. revenue ranking at No. 9 overall, while it was the No. 7 app in terms of spending on Google Play (it missed the App Store top 10). 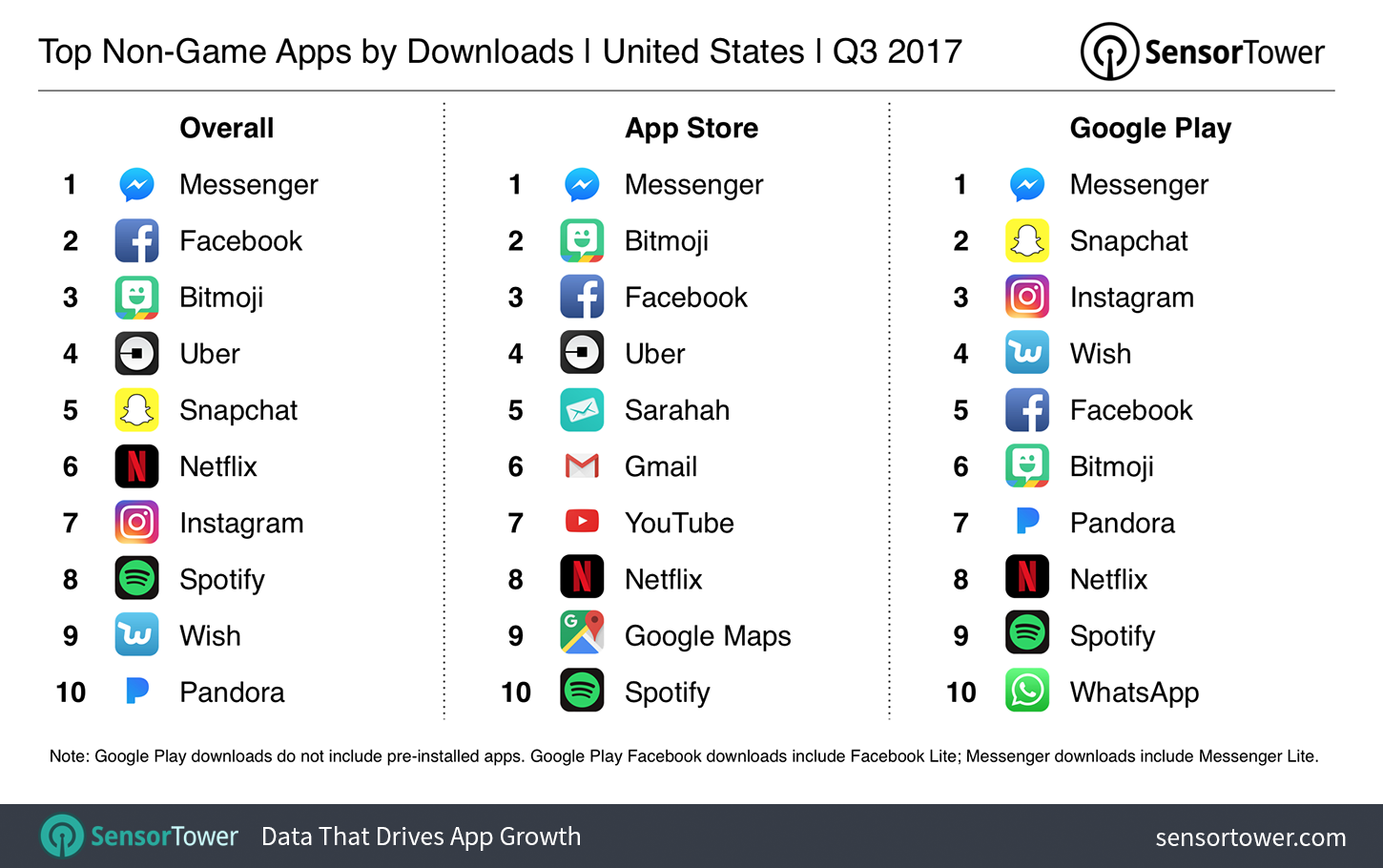 The most noteworthy change visible on the U.S. downloads ranking for 3Q17 was the absence of Snapchat from the App Store top 10. Having ranked at No. 8 in 2Q17, it dropped to No. 18 last quarter on iOS. On Google Play, it remained ranked at No. 2, which was enough for a No. 5 ranking in terms of overall downloads.

Sensor Tower will dive into the top mobile games of 2017's third quarter soon and our 3Q17 Store Intelligence Data Digest is right around the corner. Keep an eye here and on our Twitter for these and other new market analyses.