Global iOS game downloads were up 12.61 percent last month over December 2015, according to estimates produced by Sensor Tower's Store Intelligence platform. In our previous look at monthly games category downloads, we estimated 614 million new installs for the month of December; for January 2016, we saw 692 million.

Estimated worldwide revenue for the category hit $969 million last month, which was down $29 million or 2.91 percent from December's total of approximately $998 million. After the break, we'll dive into our top 10 charts for January to rank which titles were instrumental in driving download totals up globally, and which came out on top in terms of U.S. revenue.

Last month, we briefly touched upon the then-fresh global launch of King's second Candy Crush spin-off, Jelly Saga. We anticipated it performing well worldwide during January, and now we know exactly how well it did for the full month.

King was prevented from capturing January's worldwide download crown by Cheetah Mobile's Piano Tiles 2, which held steadfast in its No. 1 position, adding nearly three million estimated downloads over December. The free music-rhythm title dropped one position in the U.S. where it was supplanted by surprise hit Color Switch, a simple "how far can you get" game developed by only two people in one week.

Despite its humble origins, the free title has been hailed by App Store reviewers for its frustrating-yet-addictive gameplay, which reminds players of another devilish gaming app. Color Switch added more than five million downloads and climbed 97 positions over December to place first in the U.S. and, as of this writing, the title is still ranked No. 1 on the App Store's top free iPhone apps chart for all categories. You can see its performance on the U.S. top free apps chart for iPhone, all categories, below: 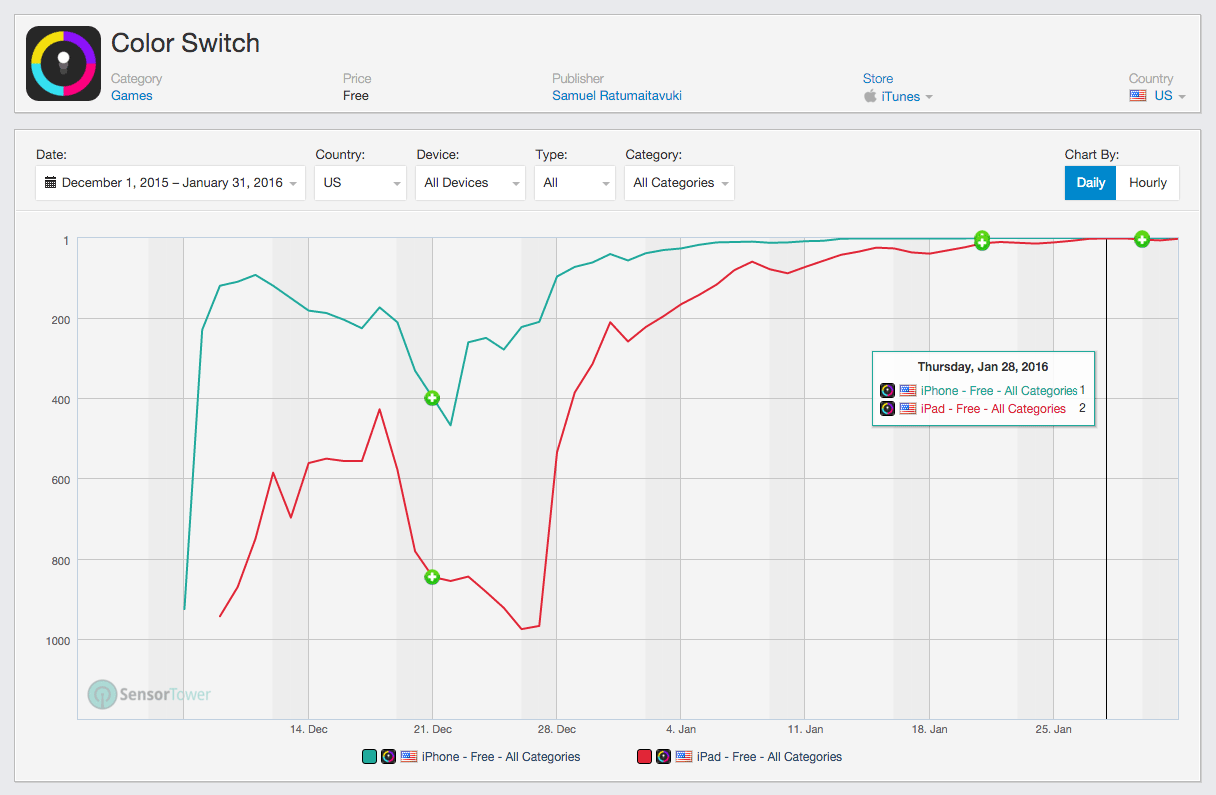 Color Switch reached No. 1 in all categories for iPhone on January 21.

On the subject of month-over-month growth, three titles climbed the U.S. chart even more significantly from their December ranks to place in the top 10. Traffic Rider and Racing in Car rose 112 and 799 positions, respectively, while Lifeline... from Big Fish Games and 3 Minute Games capitalized on a brief free period (down from its usual 99 cents) to rise 2,947 places over December and add nearly 1.9 million new players.

Also of note on the U.S chart were newcomers Pocket Mortys from Adult Swim (based on the popular cartoon Rick & Morty) and Social Point's World Chef, which both managed to debut in the top 10. Outside of the U.S., Tencent continued what's becoming its trend of releasing new titles in China that rank in the top 10 for their first months of availability. In January, those were Naruto Mobile, based upon the near-legendary anime and manga series, and Parkour Everyday 3D, an updated take on the publisher's immensely popular free-running action game.

Seeing Supercell's Clash of Clans, Boom Beach, and Hay Day in the U.S. revenue top 10 has become commonplace, but the publisher's biggest rival, Machine Zone, has only been represented b a single title, the in-app purchase juggernaut that is Game of War - Fire Age. That's all changed, as its second title, Mobile Strike, has finally cracked the U.S. revenue top 10, placing eighth overall. In the process, it rose six places over its December rank, having made its global debut in November 2015.

It was an otherwise uneventful month on the U.S revenue front, with the only other standout event being a position swap between DoubleDown Casino and Madden NFL Mobile at fourth and fifth place, respectively. It's noteworthy that Madden saw a decrease in month-over-month revenue despite the lead up to Super Bowl 50.

Speaking of the Big Game, it should be interesting to see how Machine Zone's TV commercial for Mobile Strike affected the title's download performance—the publisher was the sole app-specific advertiser during SB50—when we revisit these charts again next month. King's traditional and mobile advertising blitz for Candy Crush Jelly Saga is also in full swing, so we may well see its latest title gain even more ground on competitors in the U.S. and abroad during the rest of February.

In the meantime, if you're an iOS or Android developer and want to see your own app's ranking history, you can do so in our App Intelligence product. Until next time, let us know what you think of these reports by tweeting @SensorTower or emailing randy@sensortower.com.