The top mobile app publisher worldwide by downloads for Q4 2018 was Facebook with more than 800 million new installs during the quarter. The full ranking of the top 10 most downloaded publishers is below. App download estimates are from Sensor Tower’s Store Intelligence platform. 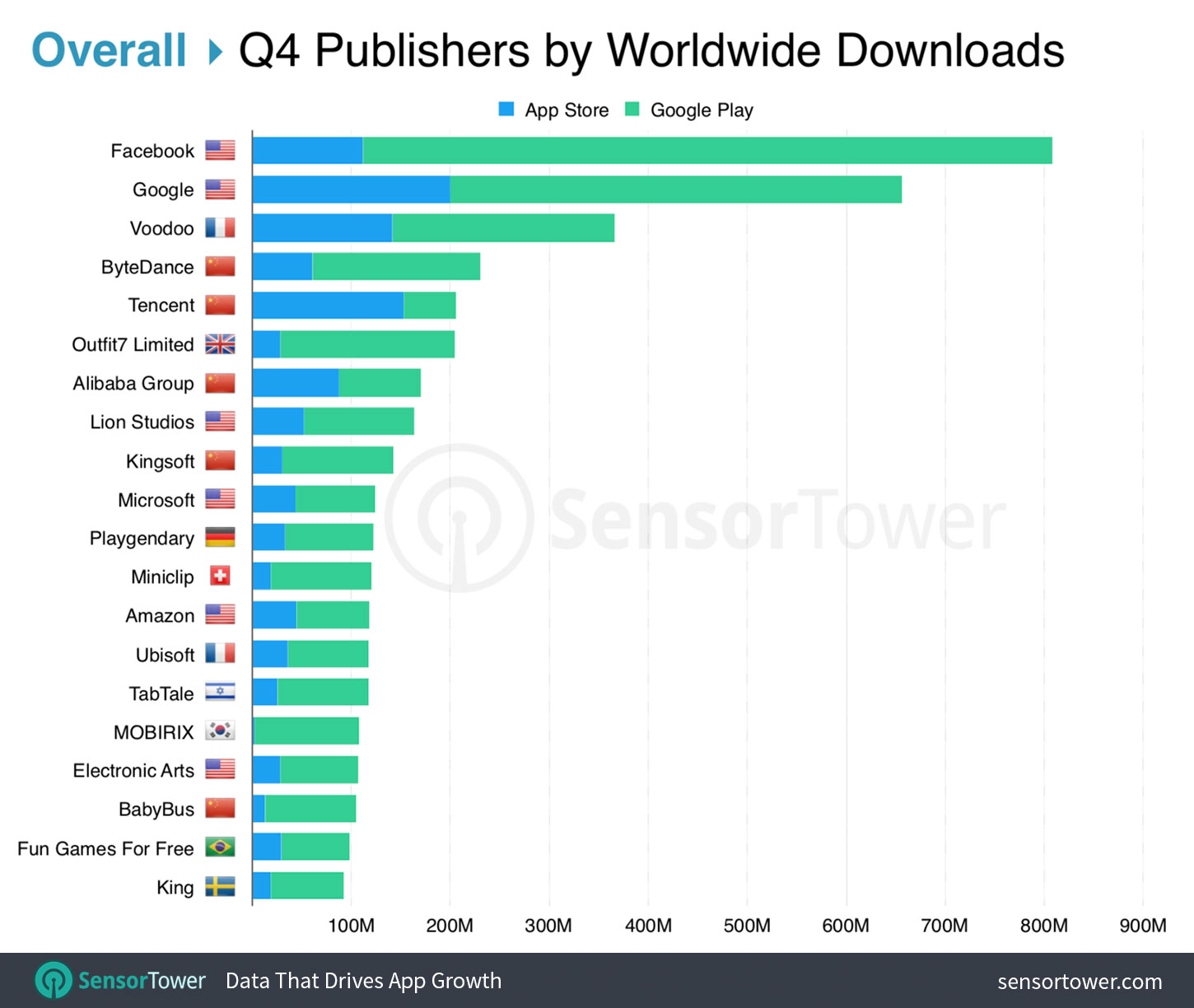 Propelled by TikTok's continued rise in India, ByteDance passed Tencent to become the top Chinese publisher in Q4 2018. The company was No. 4 worldwide in Q4 2018. Lion Studios capped off an excellent 2018 by reaching the No. 8 spot in Q4. The publisher grew from fewer than five million downloads in Q1 2018 to 163 million in Q4. 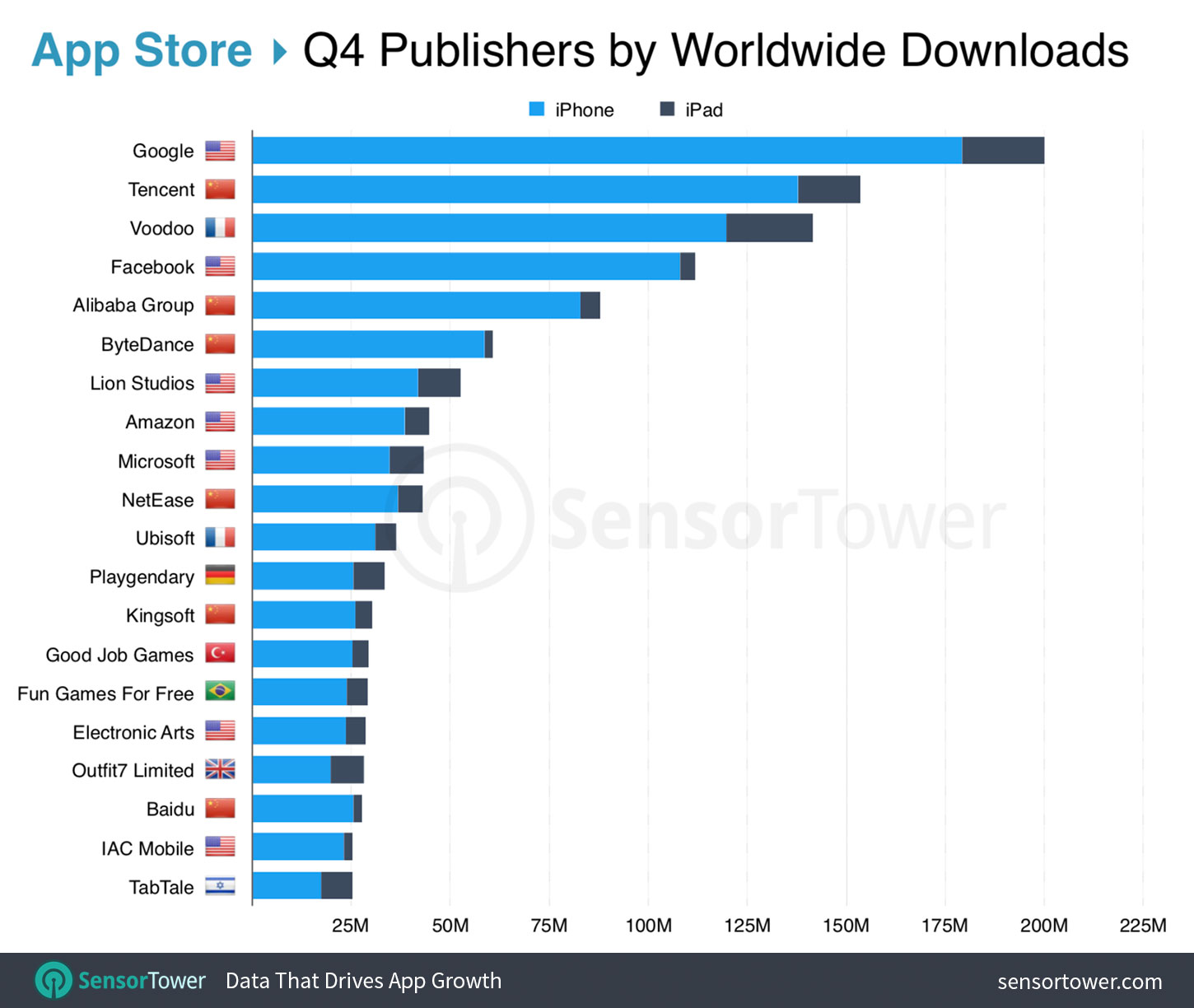 Google was the top performing App Store publisher by downloads worldwide for Q4 2018 with close to 200 million installs, followed by Tencent, Voodoo, Facebook, and Alibaba Group.

Amazon moved up three spots from the previous quarter to rank No. 8 among all App Store publishers. Amazon’s Alexa app had 11 million installs, with four million in the week between Christmas and New Year’s Day alone. Good Job Games, based in Turkey, had some top hyper-casual games in the quarter. Games such as Swing Star, Slices, and Color Bump 3D helped the publisher reach the top 20. 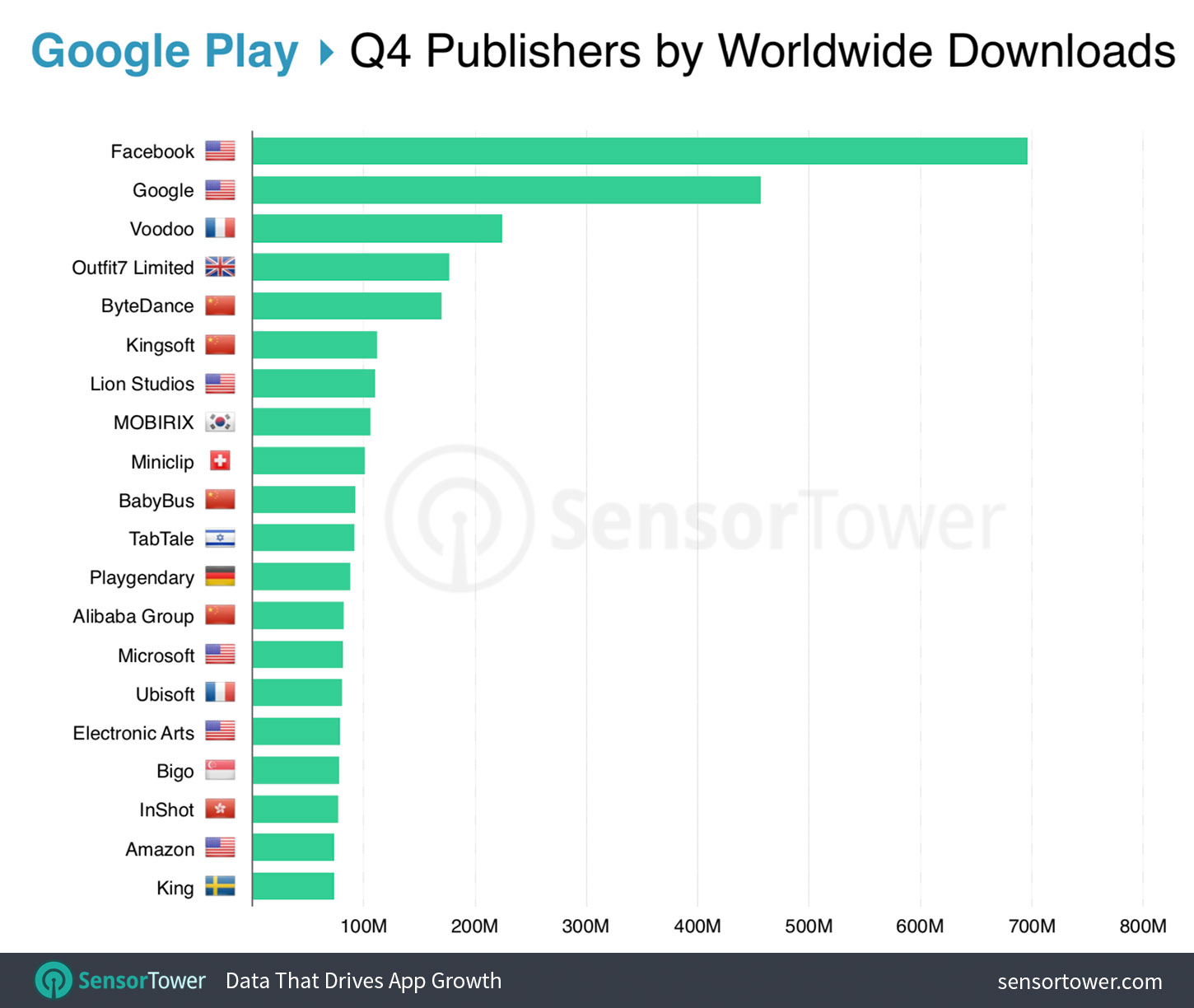 Facebook was the top performing Google Play publisher by downloads worldwide for Q4 2018 with close to 700 million installs, followed by Google, Voodoo, Outfit7 Limited, and ByteDance.

Google had a very strong quarter on Google Play, with download growth of 25 percent quarter-over-quarter. Top apps included Google Pay for India, YouTube, and YouTube Music. The top six publishers remained the same as the previous quarter. The only change in ranking among them was Outfit7 Limited passing ByteDance to take the No. 4 spot.

Store Intelligence users can see app revenue and app download estimates for the above publishers in addition to historical performance metrics on the Sensor Tower platform. Our estimates include worldwide downloads for the App Store and Google Play between Oct. 1 and Dec. 31, 2018. Apple apps and Google pre-installed apps are excluded. We report unique installs only. Android estimates do not include third-party stores. Figures represent aggregate installs of all app versions, ex: Facebook and Facebook Lite.