Utilizing Sensor Tower’s Game Taxonomy and Game Intelligence features, which segments games into relevant genres and subgenres to support publishers in efficiently identifying key trends, we analyzed each of the 14 main game genres in 1H22 compared to 1H21, looking at U.S. revenue and downloads in each category across the App Store and Google Play. With many challenges facing the market, by looking at the first half of the year, as well as the second quarter, we can get a clearer picture of how the market is faring in the face of the global cost of living crisis, inflation, IDFA headwinds, and other issues. 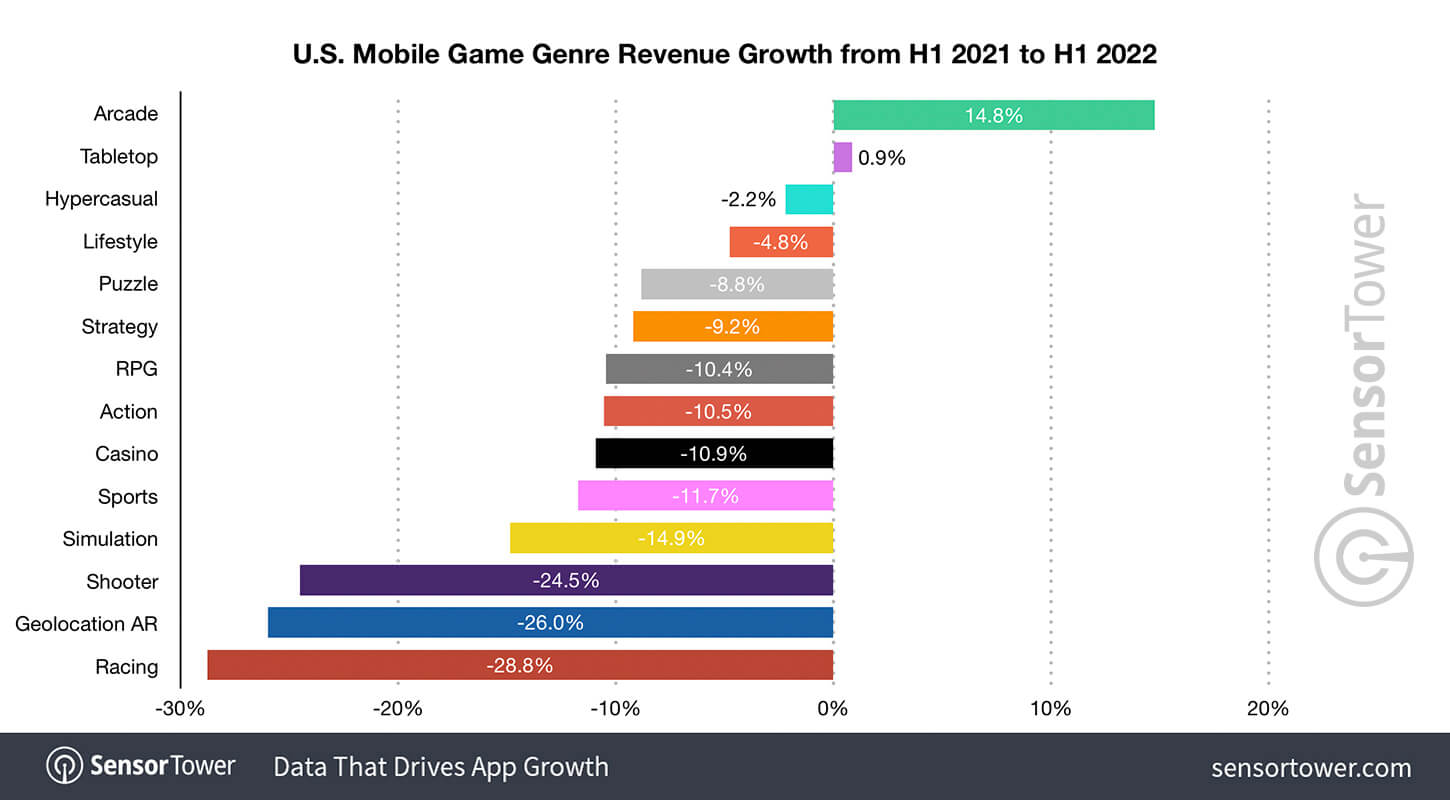 The second fastest-growing genre by revenue in 1H22 was Tabletop, which increased by approximately 1 percent Y/Y to close to $388.8 million. All other mobile game genres saw a decline in overall player spending during the first half of the year, with Racing seeing the steepest decrease at 28.8 percent.

Puzzle was the largest category by spending in 1H22, picking up $2.3 billion billion, a fall of 8.8 percent Y/Y. It was followed by Casino at No. 2, which generated $2.2 billion, and Strategy, which accumulated $2 billion.

Analyzing just Q2 2022, Arcade was still the fastest rising genre by revenue, with player spending increasing by approximately 18 percent Y/Y to $89.4 million. Hypercasual, meanwhile, ranked No. 2 with a 2.3 percent increase in player spending to $27.3 million. Once again, all other genres experienced declines, with Racing game revenue declining by 38 percent. 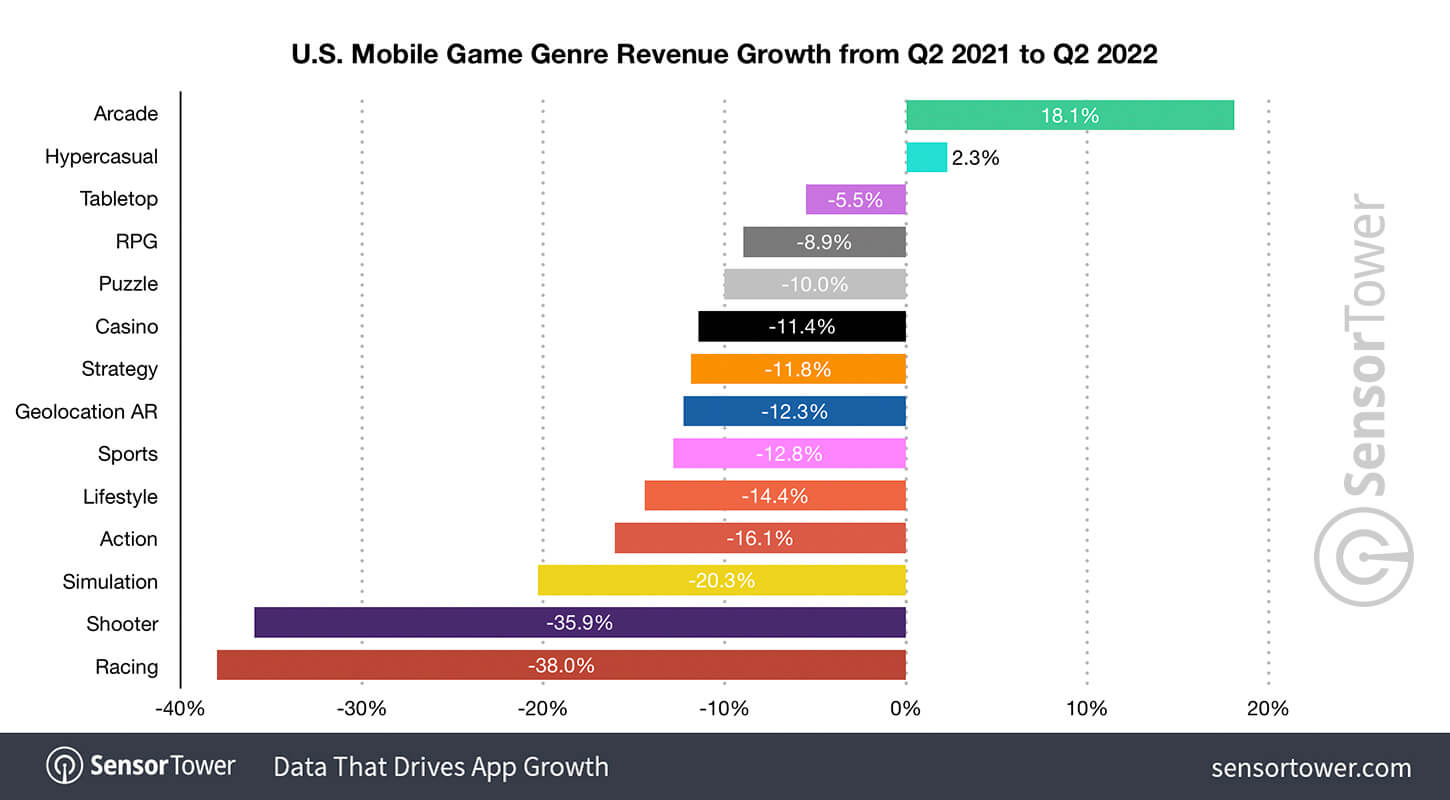 The Action genre saw the fastest growth in downloads during the first half of the year compared to the same period in 2021, rising by 5.4 percent Y/Y to 54.7 million. The top Action subgenre for downloads was Action Sandbox, which saw downloads climb by 2.3 percent Y/Y to 15.7 million installs. The No. 1 Action game for downloads was Genshin Impact from miHoYo, which accumulated 2.3 million downloads, followed by Galaxy Attack: Space Shooter from Rocket Go Global at No. 2 and Galaxy Attack: Alien Shooter, also from Abigames, at No. 3. 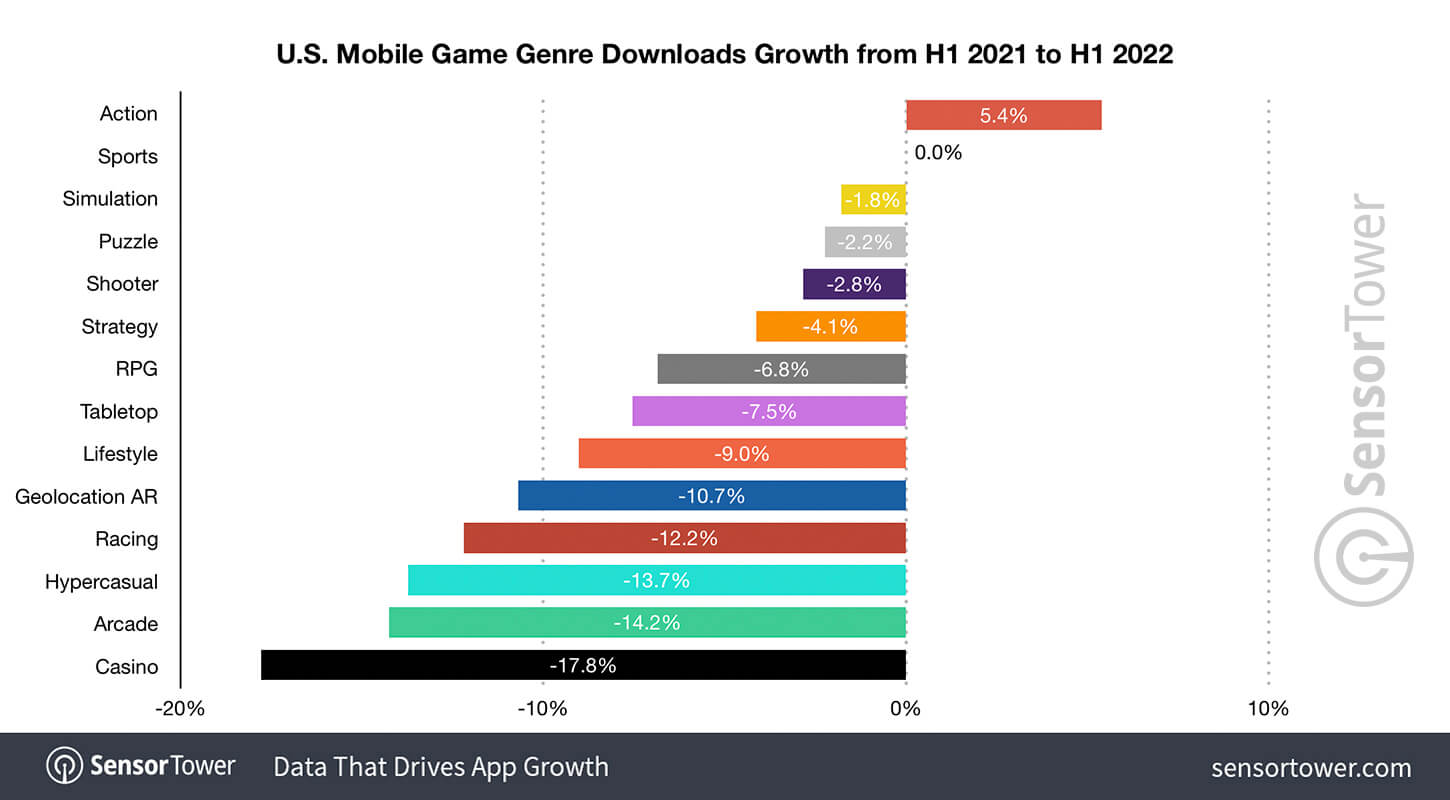 The Sports genre was the only other category not to see a decline in downloads Y/Y, remaining flat at approximately 66 million installs. Simulation saw the slowest decline out of the genres that saw a fall in revenue, with a decrease of 1.8 percent to about 168 million Y/Y.

Hypercasual ranked No. 1 with the most downloads during 1H22, generating 718.2 million installs, a decline of 13.7 percent Y/Y. Puzzle, meanwhile, ranked No. 2 for downloads, and Arcade ranked No. 3.

Analyzing just 2Q22, there were six genres that didn’t experience declines, while other categories saw a steeper decrease than compared to the entire first half of the year. The Shooter genre saw the fastest growth, with installs rising by 17.5 percent Y/Y to 30.2 million, driven largely by the launch of Apex Legends Mobile from EA, which picked up 5.5 million downloads during 2Q22. 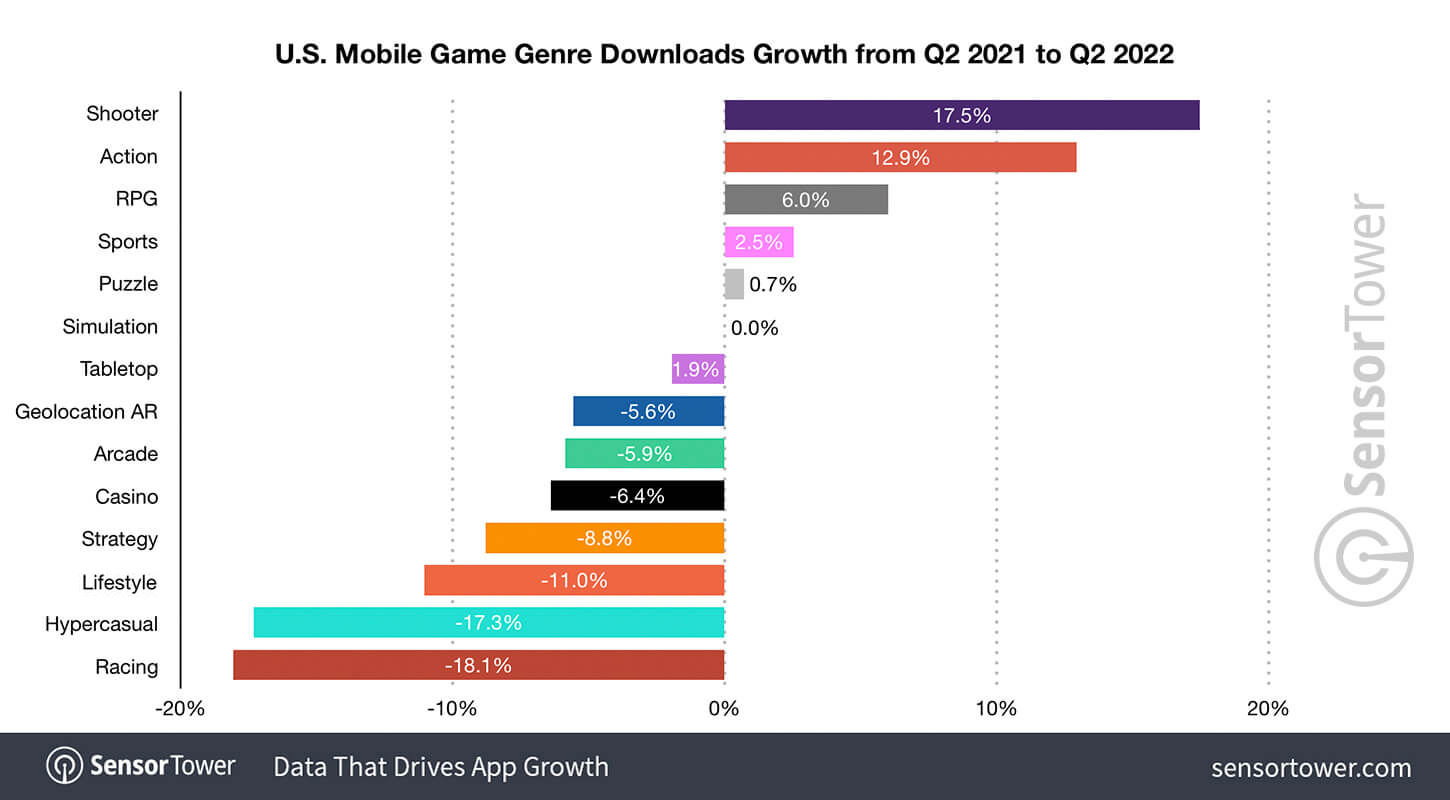 The U.S. mobile games market has faced significant challenges during the first half of 2022. Overall U.S. mobile game revenue fell by 9.6 percent Y/Y to $11.4 billion, while downloads declined by 2.5 percent to 2.4 billion. Looking at just 2Q22, revenue decreased by 11.4 percent Y/Y to $5.6 billion, though downloads were largely flat at 1.2 billion.

As previously mentioned, factors such as a rise in the cost of living, inflation, and privacy changes like IDFA deprecation have combined for a negative impact on the industry. The ending of many social distancing restrictions from the early months of the COVID-19 pandemic has also seen consumers engage with other activities outside of gaming. This doesn’t mean publishers can’t be successful and launch popular new titles, but an industry-wide rebound in the latter half of the year will likely depend on an improvement in macroeconomic factors, and whether publishers are able to adapt to privacy challenges.