Zynga (ZNGA) recently reported a record quarter, posting total gross mobile game bookings of $278.4 million, up 85 percent over Q1 2018. The strong quarter was driven by the growth and performance of recent acquisitions including Merge Dragons and Empires & Puzzles. Sensor Tower Store Intelligence can be a helpful resource in understanding the impact of new acquisitions and trends within a publisher's portfolio.

Zynga overhauled its portfolio in 2018 with its acquisitions of Gram Games, publisher of Merge Dragons ($250 million, deal closed May 20, 2018) and Small Giant, publisher of Empires & Puzzles ($560 million, deal closed January 1, 2019). According to Sensor Tower Store Intelligence, Empires & Puzzles and Merge Dragons were key drivers for Zynga's record quarter. We estimate that these two recently acquired titles were responsible for approximately 46 percent of Zynga's mobile game bookings in the quarter. Perhaps more impressive is that these two titles grew cumulative revenue almost 200 percent versus the year-ago quarter, compared to largely flat growth for the remainder of Zynga's portfolio of games. 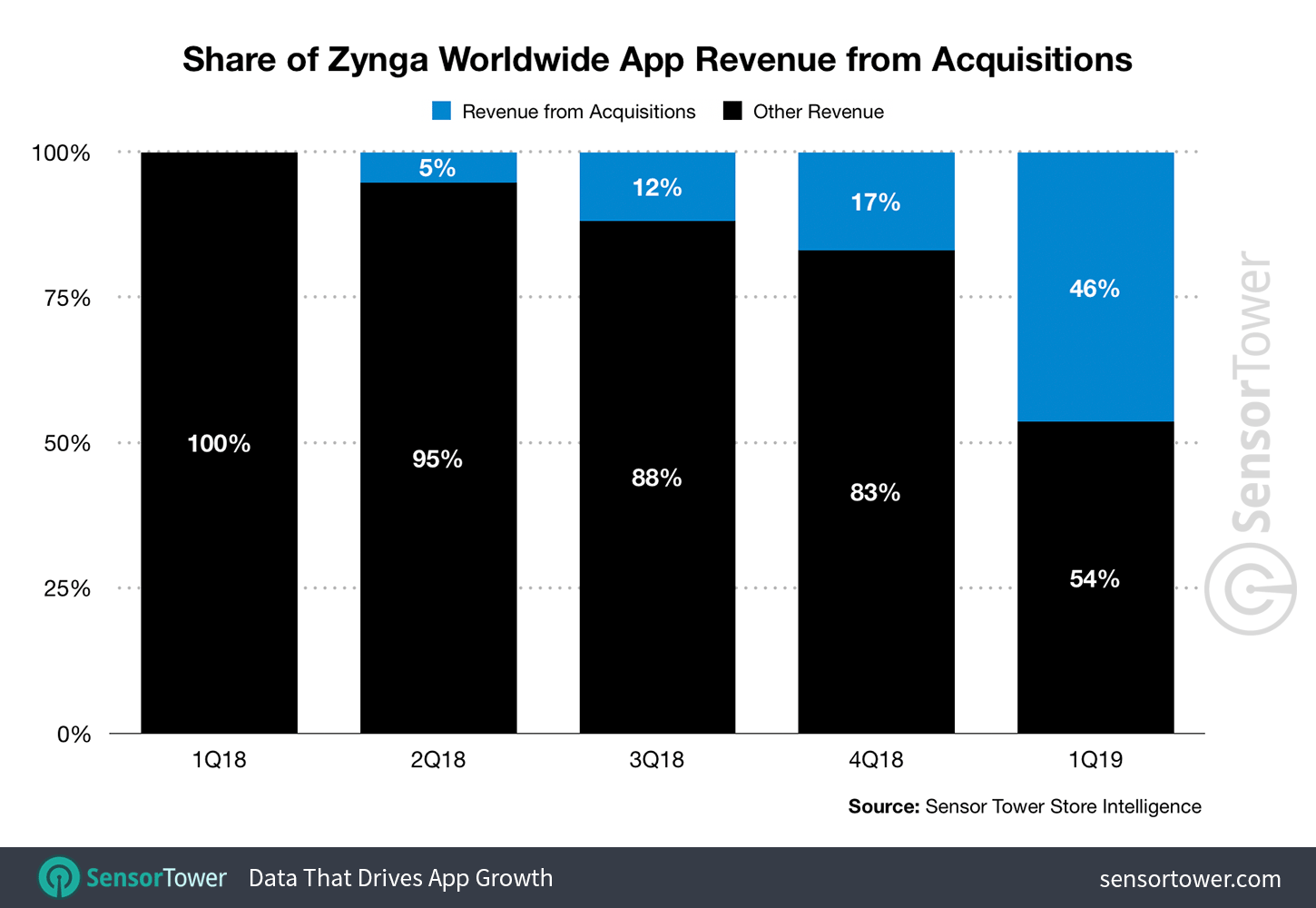 Notably, deferred revenue for Zynga in 1Q19 increased by a record $96 million, largely driven by bookings on Empire & Puzzles. The dramatic increase in deferred revenue suggests a differentiated approach to monetization for Empires & Puzzles compared to previous Zynga titles such as CSR Racing 2. Empires & Puzzles offers an in-depth RPG model and a "VIP Pass" system beyond the classic in-game currency monetization model. The app includes monthly challenges that may be encouraging users to make recurring purchases for passes and larger amounts of in-game currency. Increased deferred revenue should mean a longer runway and lifetime value for the app and offers a model for future Zynga games. 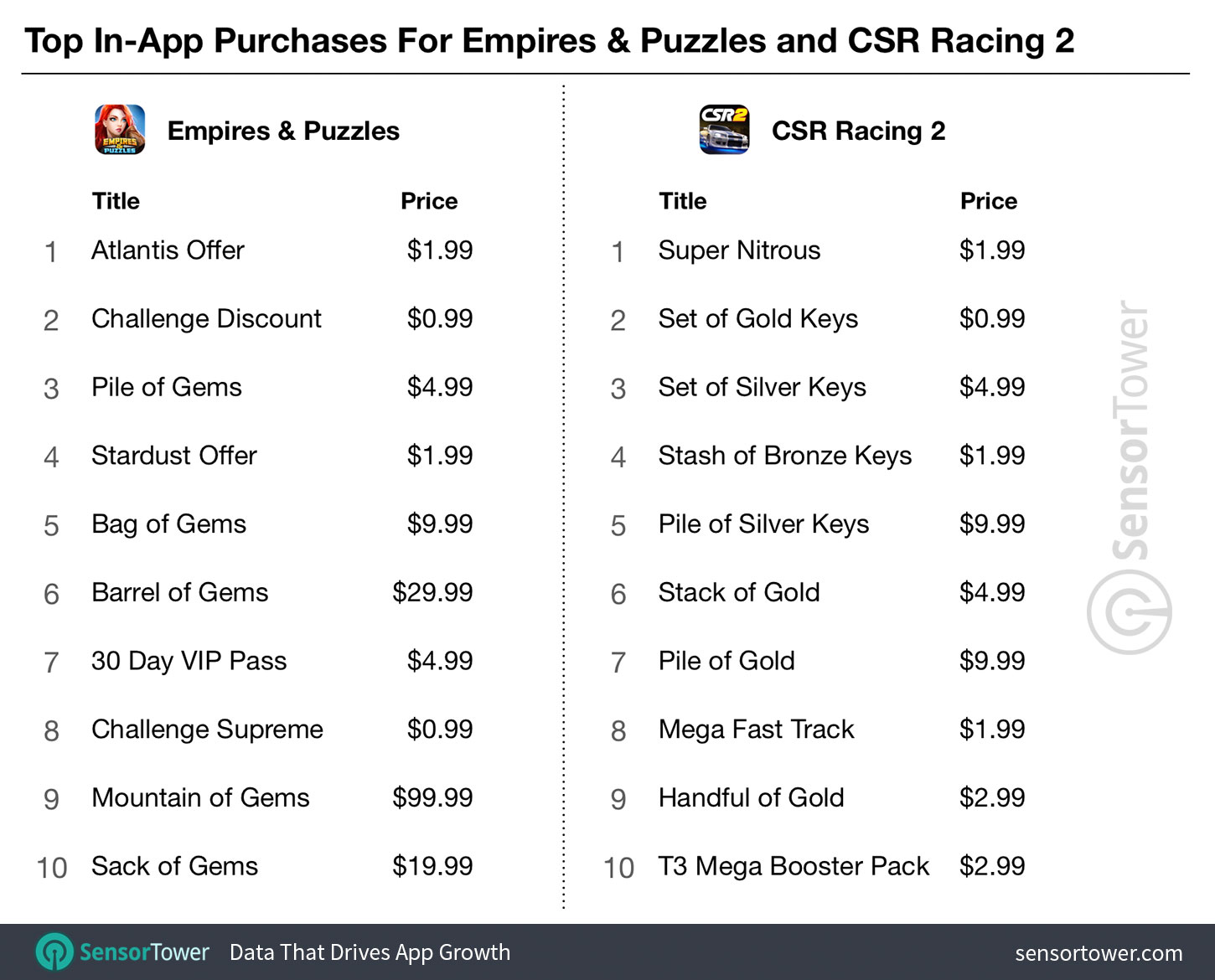 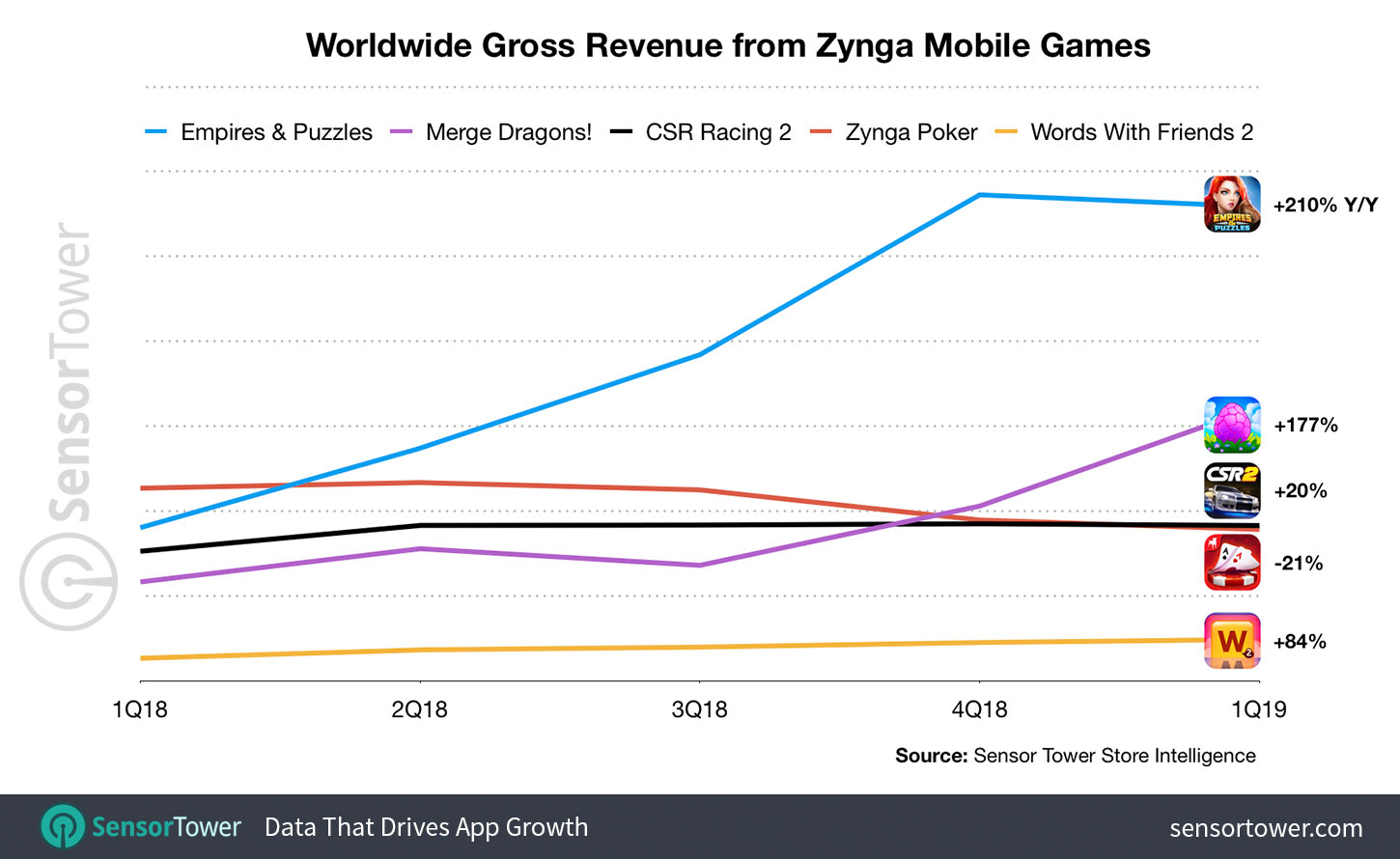 Looking forward, Sensor Tower Store Intelligence can also help track Zynga's progress on soft-launches and geographic expansion. For example, management mentioned two apps that were recently soft-launched, Game of Thrones Slots Casino and Puzzle Combat. Sensor Tower data can track the countries where the apps were launched and how the apps are performing. According to Store Intelligence data, Game of Thrones Slots Casino was soft-launched in Canada, Australia, Mexico, and Thailand. Most downloads were from Canada and Australia, consistent with the company's success with social casino games in Western markets. Meanwhile, Puzzle Combat has only been released in the Philippines to date, which may underscore the company's stated focus on Southeast Asia.

Store Intelligence users can see app download and revenue estimates for the above apps in addition to historical performance metrics on the Sensor Tower platform. Our estimates include download and revenue for the App Store and Google Play worldwide between Jan. 1, 2018 and Mar. 31, 2019. Apple apps and Google pre-installed apps are excluded. We report unique installs only. Android estimates do not include third-party stores. Figures represent aggregate installs of all app versions, ex: Facebook and Facebook Lite. 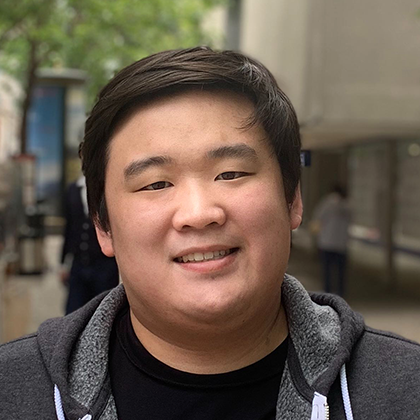