Worldwide consumer spending reached $65 billion from Apple’s App Store and Google Play combined in the first half of 2022, according to preliminary Sensor Tower Store Intelligence estimates. This was about 1 percent year-over-year higher than the $64.4 billion generated by both stores in the same period in 2021.

While spending continues to climb, the velocity has diminished due to normalization after the supercharged growth seen during the height of the pandemic as well as the economic downturn seen globally. These factors have led to the Y/Y growth in H1 2022 trailing the 24.8 percent growth in H1 2021 by nearly 24 percentage points.

This is a reversal of roles from the first half of 2021, when Google Play experienced more Y/Y growth. Global consumer spending on the store climbed 30 percent in 1H21 compared to the same period in 2020, while the App Store saw 22.1 percent growth. 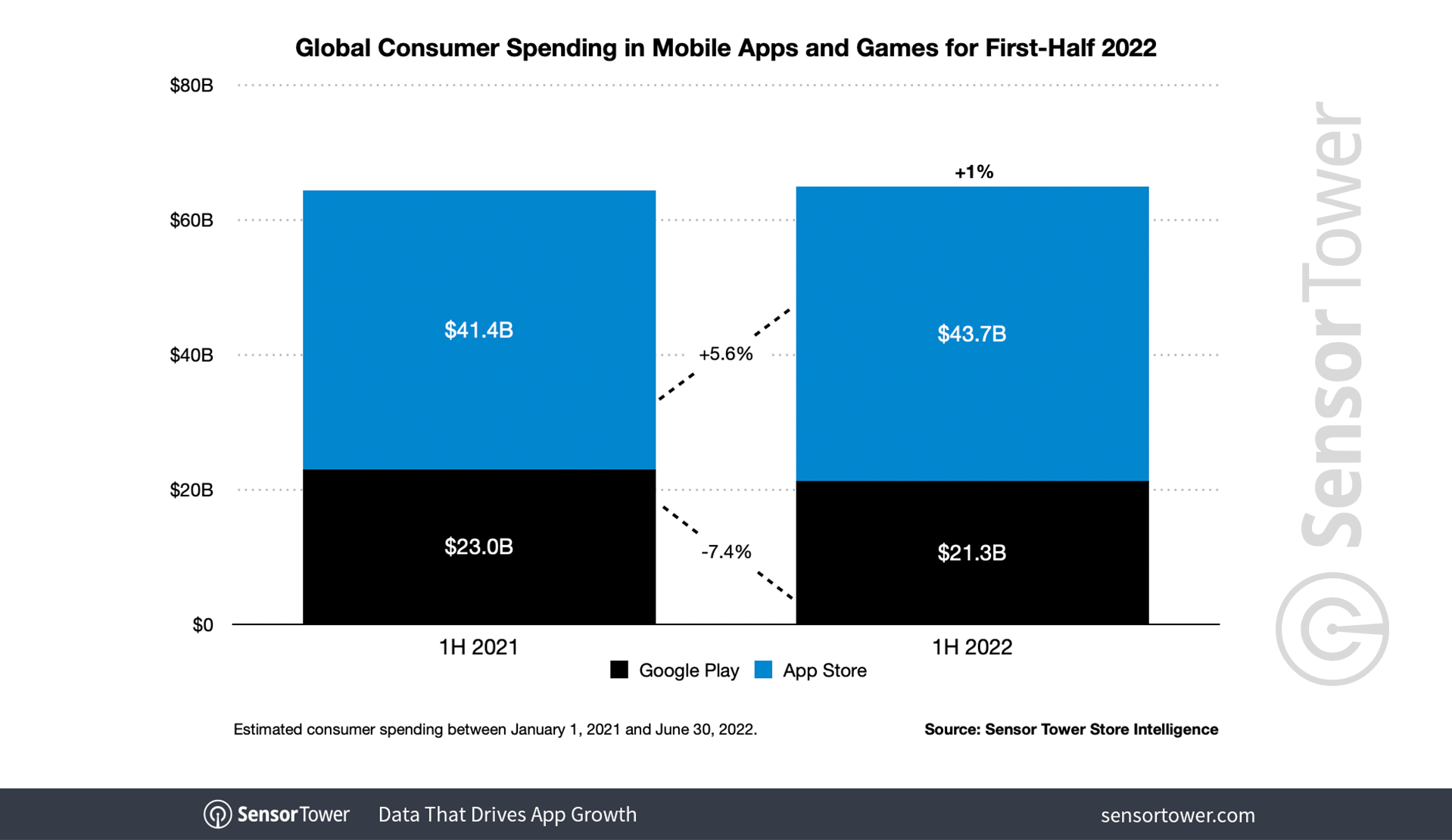 TikTok maintained its spot as the highest grossing non-game app worldwide across both the App Store and Google Play, when including Douyin on iOS in China. In the first half of the year, consumers spent $1.7 billion in the app, up 85 percent from $920.7 million in the year-ago period. TikTok has now reached approximately $5.5 billion in total lifetime revenue.

YouTube held steady as the second highest grossing non-game app with an estimated consumer spend of $693.6 million. Its cousin from Alphabet’s portfolio, Google One, placed third with nearly $614 million. Tinder and Disney’s streaming platform Disney+ rounded out the top five at No. 4 and No. 5, respectively. 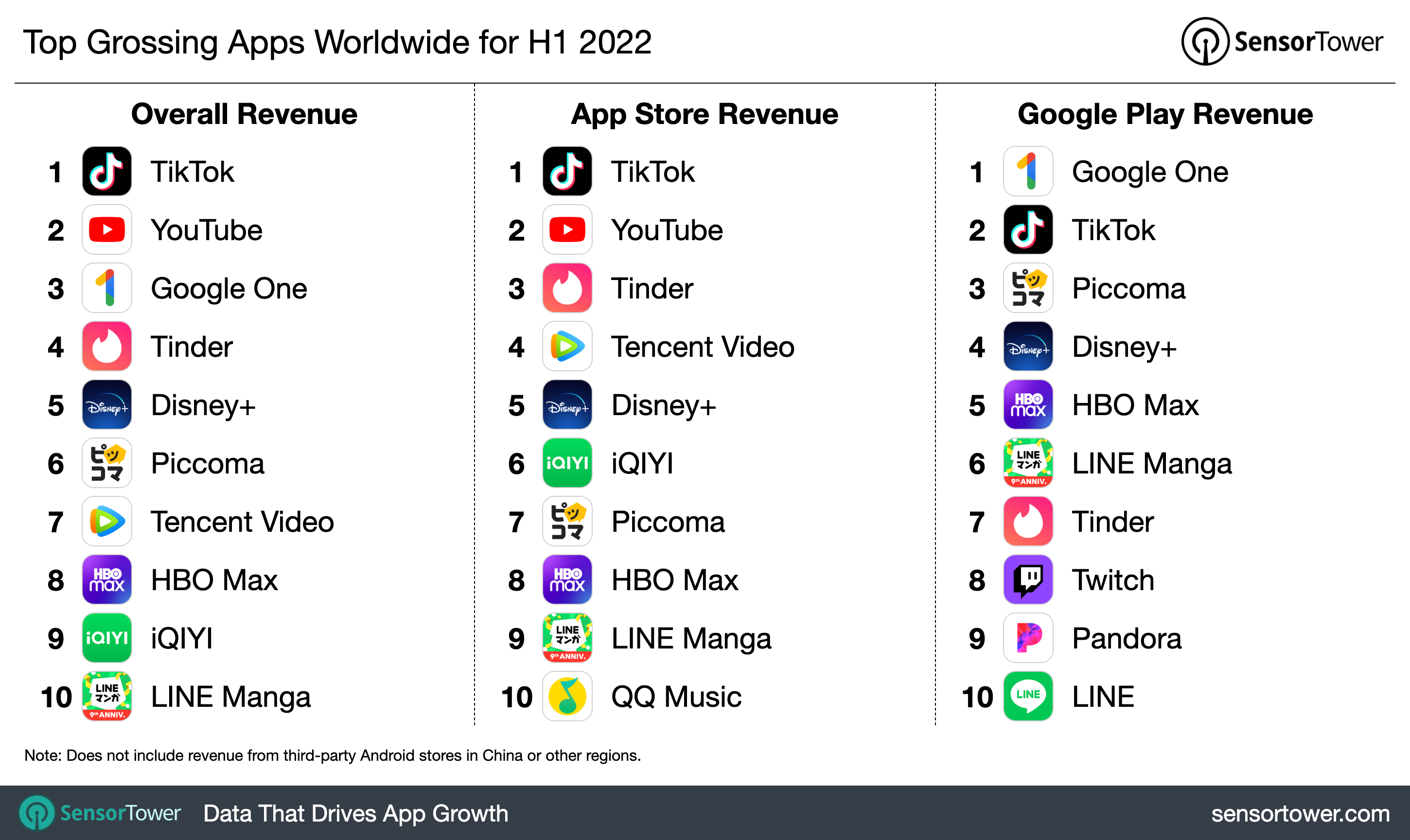 Although consumer spending continued to climb yearly in 1H22, app adoption has cooled from the previous astronomical growth seen. In the first half of the year, there were 71.2 billion installs from the App Store and Google Play, down 1.5 percent from 72.3 billion 1H21. 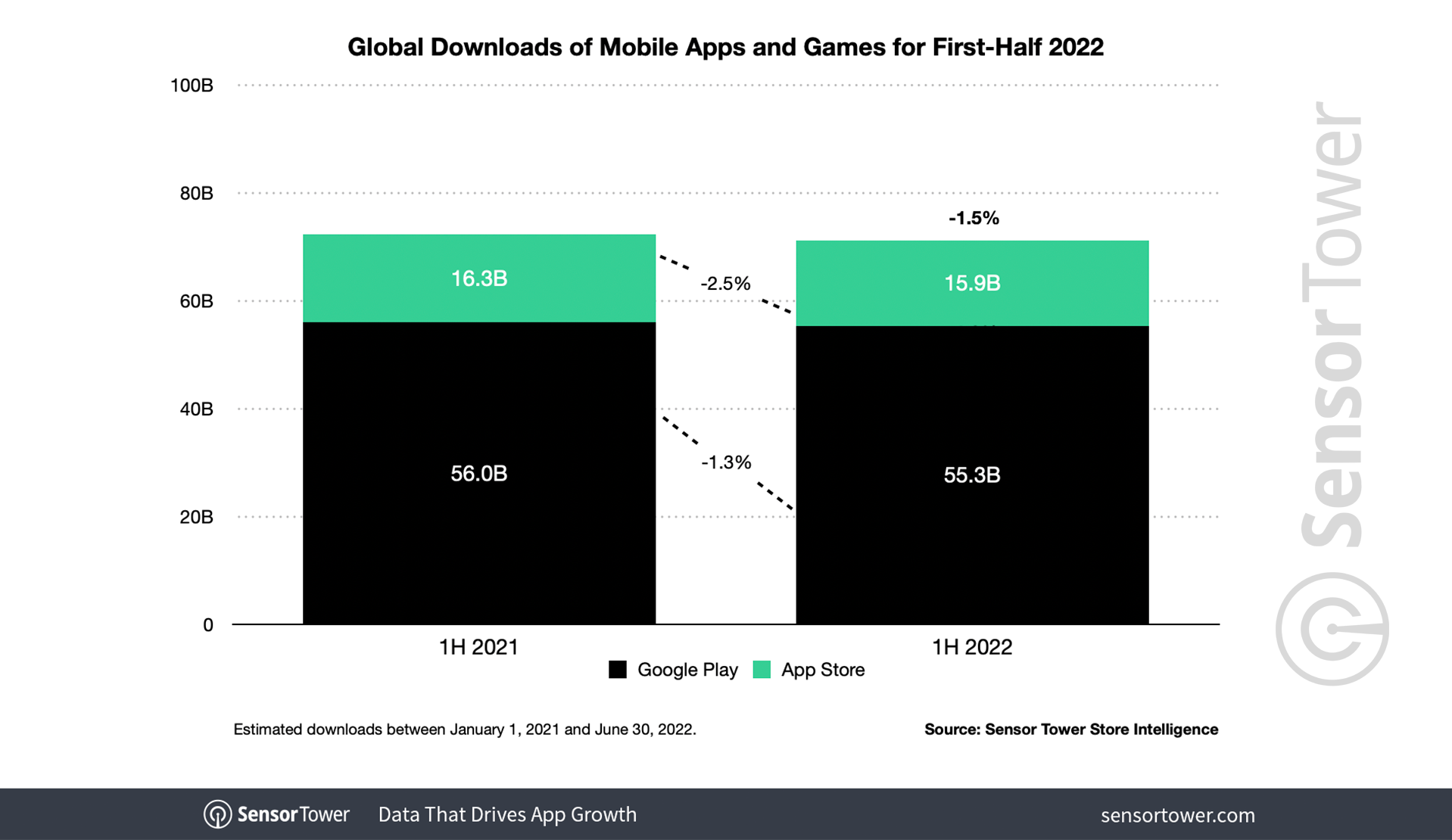 Google Play’s worldwide downloads hit approximately 55.3 billion, down 1.3 percent Y/Y from 56 billion. This isn’t as large of a decline as that seen on Apple’s marketplace, but still indicates a withdrawal from the outsized growth seen in the year-ago period. 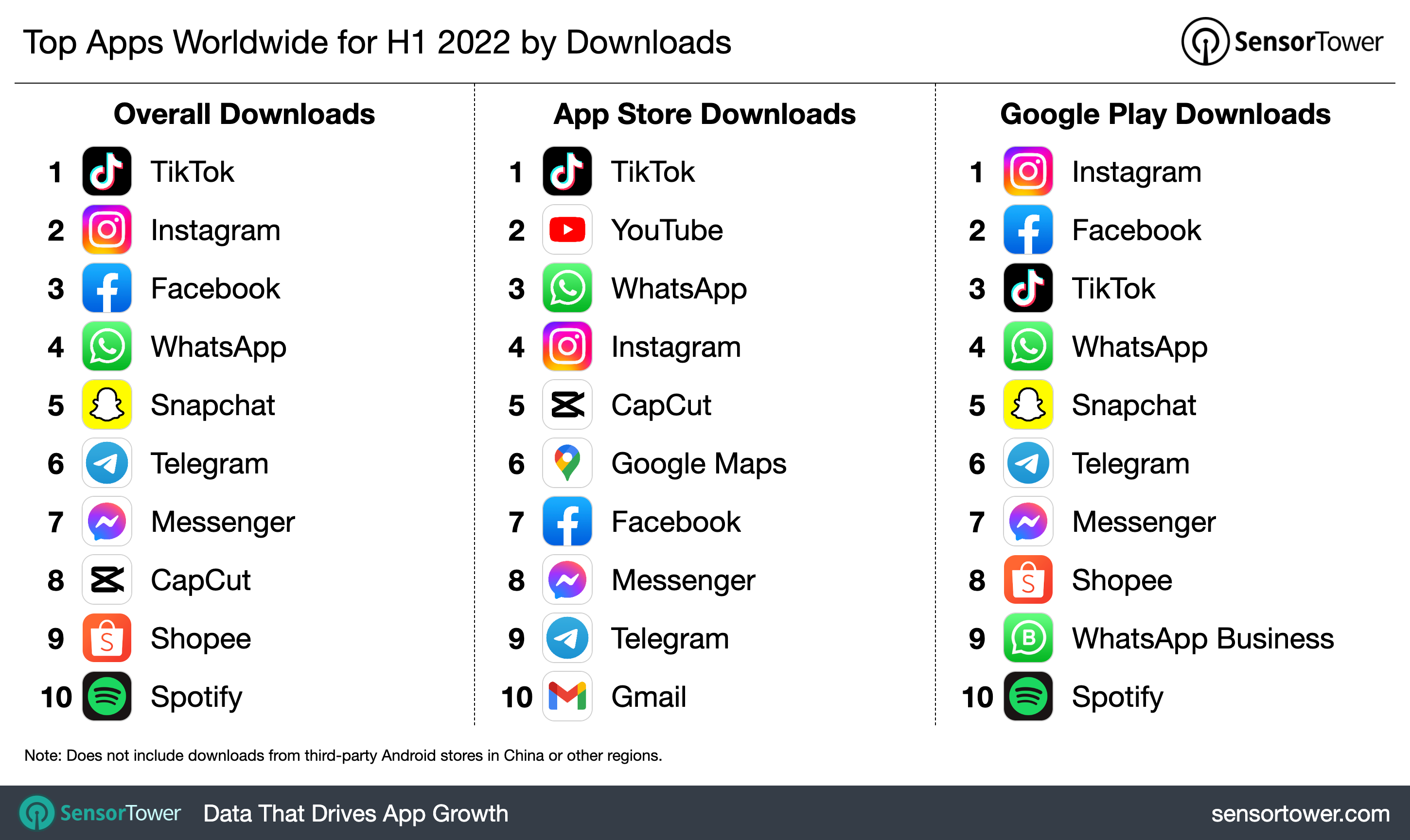 Familiar apps rounded out the top five, with only Instagram and Facebook swapping places to No. 2 and No. 3, respectively. They were followed by WhatsApp and Snapchat at No. 4 and No. 5, respectively.

Worldwide player spending in mobile games reached $41.2 billion in 1H22, down 6.6 percent Y/Y from $44.1 billion. Both Apple’s App Store and Google Play saw a downturn in spending, though the decrease was more marked on Google’s marketplace.

Players spent approximately $25.6 billion on iOS, down 0.8 percent Y/Y from $25.8 billion in the year-ago period. On Google Play, players spent $15.6 billion in 1H22, down 14.8 percent Y/Y from $18.3 billion. Similar to the factors affecting non-game apps, mobile game spending has been impacted by both normalization after the surge during the pandemic as well as economic headwinds worldwide. 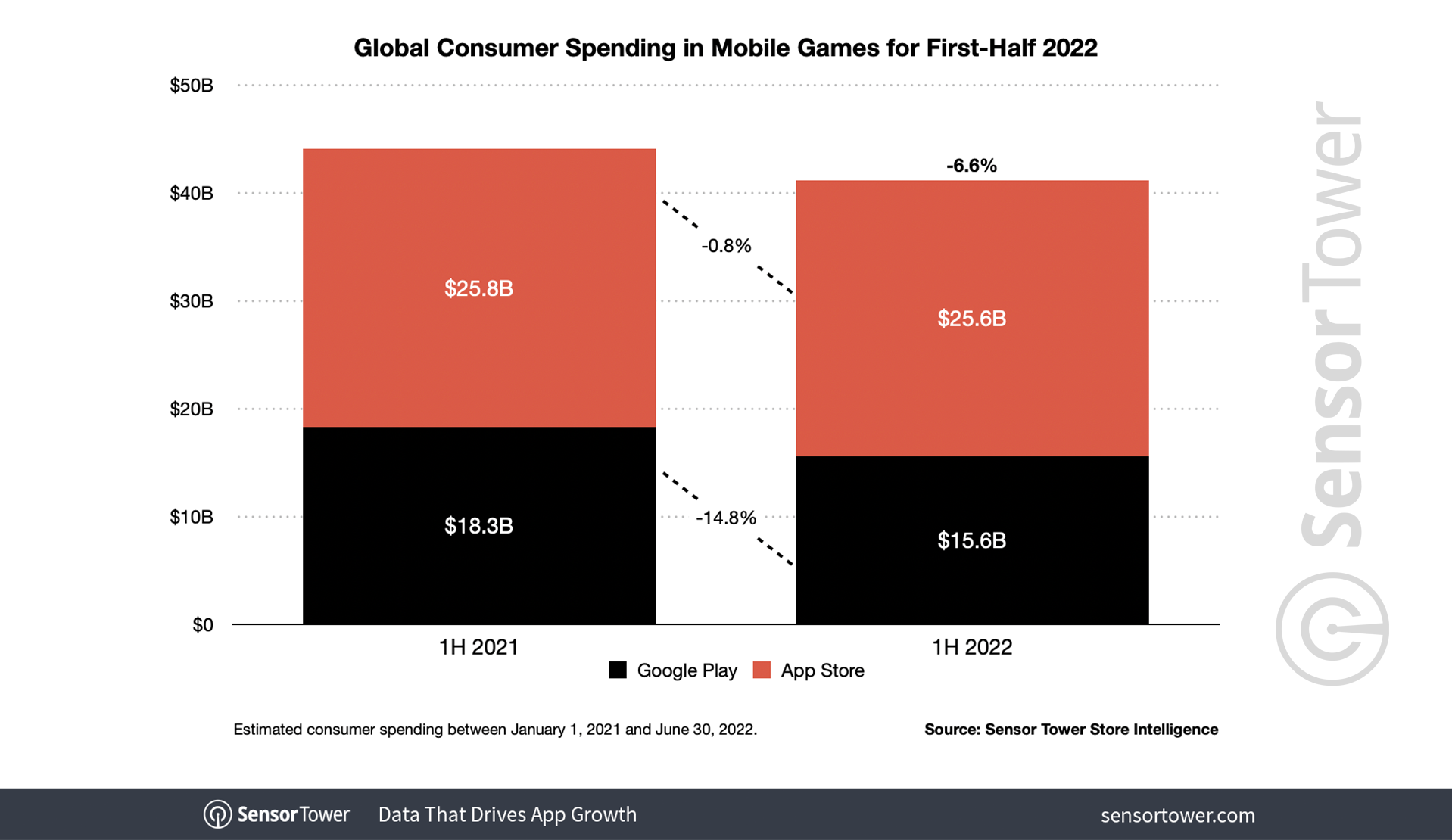 The top two highest grossing mobile games in the first half of the year each generated more than $1 billion in consumer spending.

Tencent’s Honor of Kings and PUBG Mobile, including Chinese localization Game for Peace/Peacekeeper Elite, were once again top grossing mobile games in 1H22 at Nos. 1 and 2, respectively. Honor of Kings saw $1.4 billion in consumer spending in the first half of the year, while PUBG Mobile generated approximately $1.1 billion. This performance by the former title comes as Tencent has signaled plans to release Honor of Kings in Western markets by the end of the year. 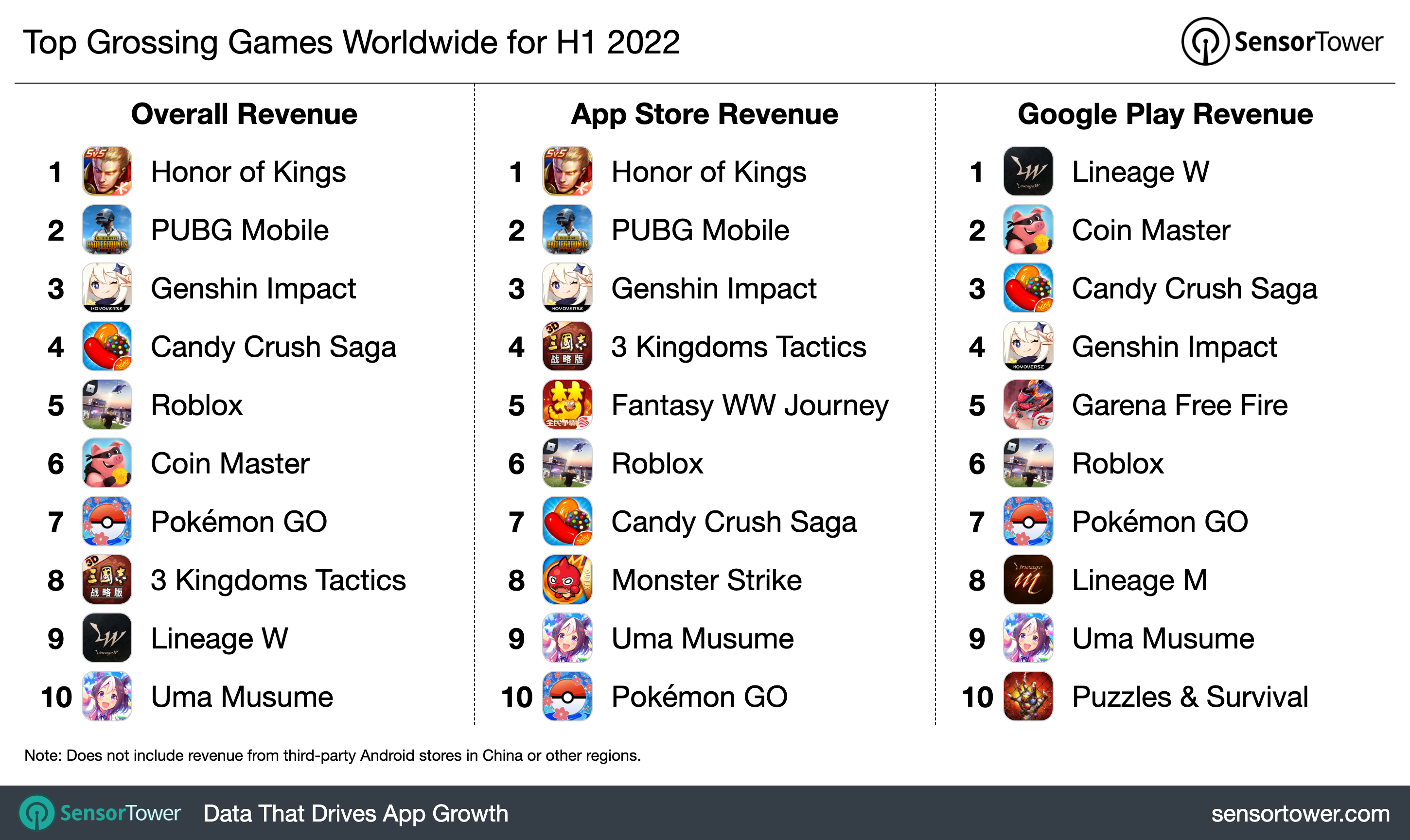 Coming in at No. 3 was miHoYo’s Genshin Impact, which nearly hit the one-billion mark with $986.2 million in consumer spending. The game recently passed $3 billion in lifetime spending last month, averaging approximately $1 billion every six months.

Candy Crush Saga and Roblox rounded out the top five at Nos. 4 and 5, respectively. Candy Crush Saga saw about $593.5 million in consumer spending in 1H22, while Roblox generated approximately $576.5 million. 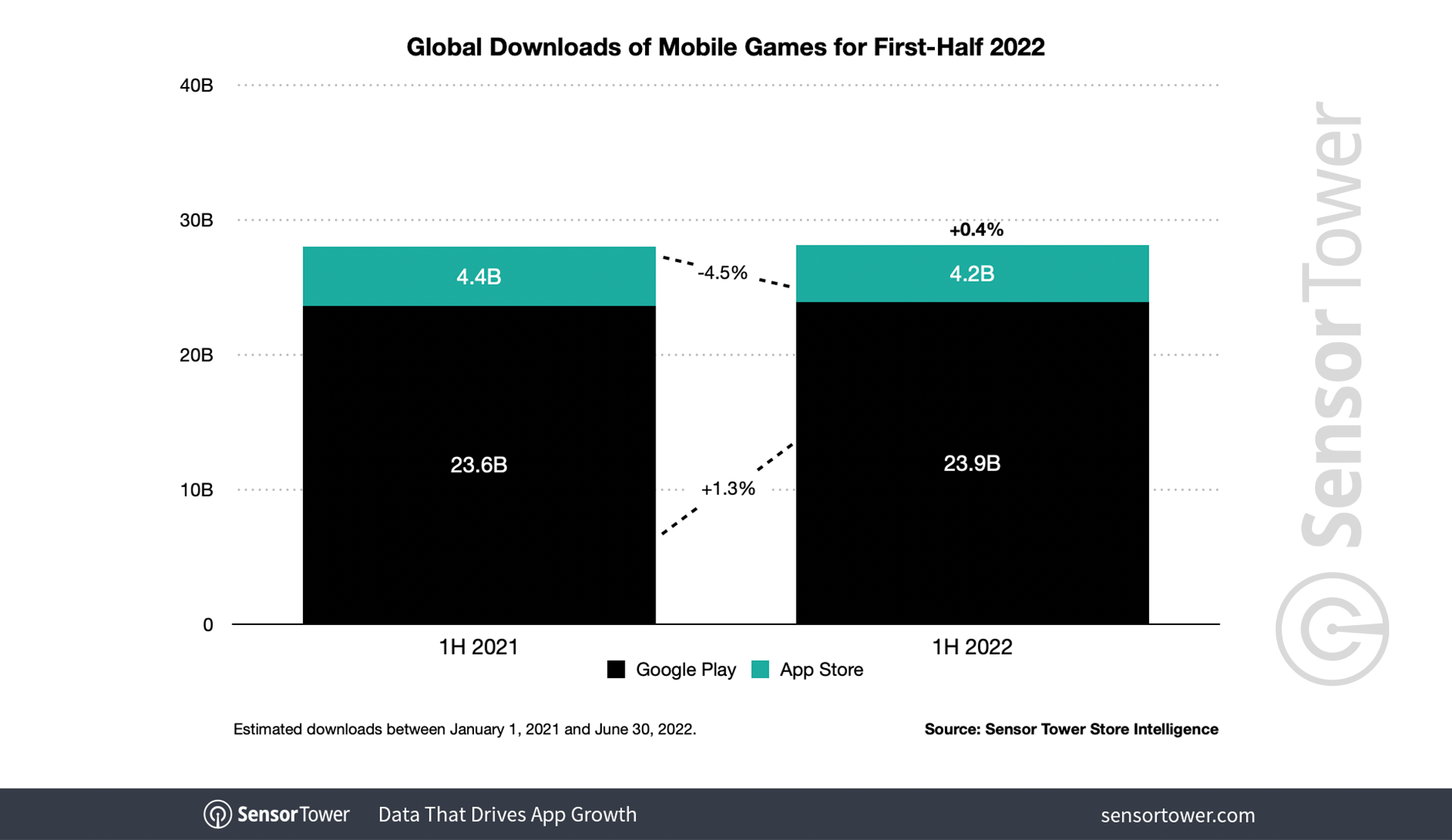 Although player spending was down in the first half of the year, mobile game installs experienced a slight uptick Y/Y. Across both the App Store and Google Play, mobile games reached about 28.1 billion downloads globally, up 0.4 percent Y/Y from 28 billion in 1H21. 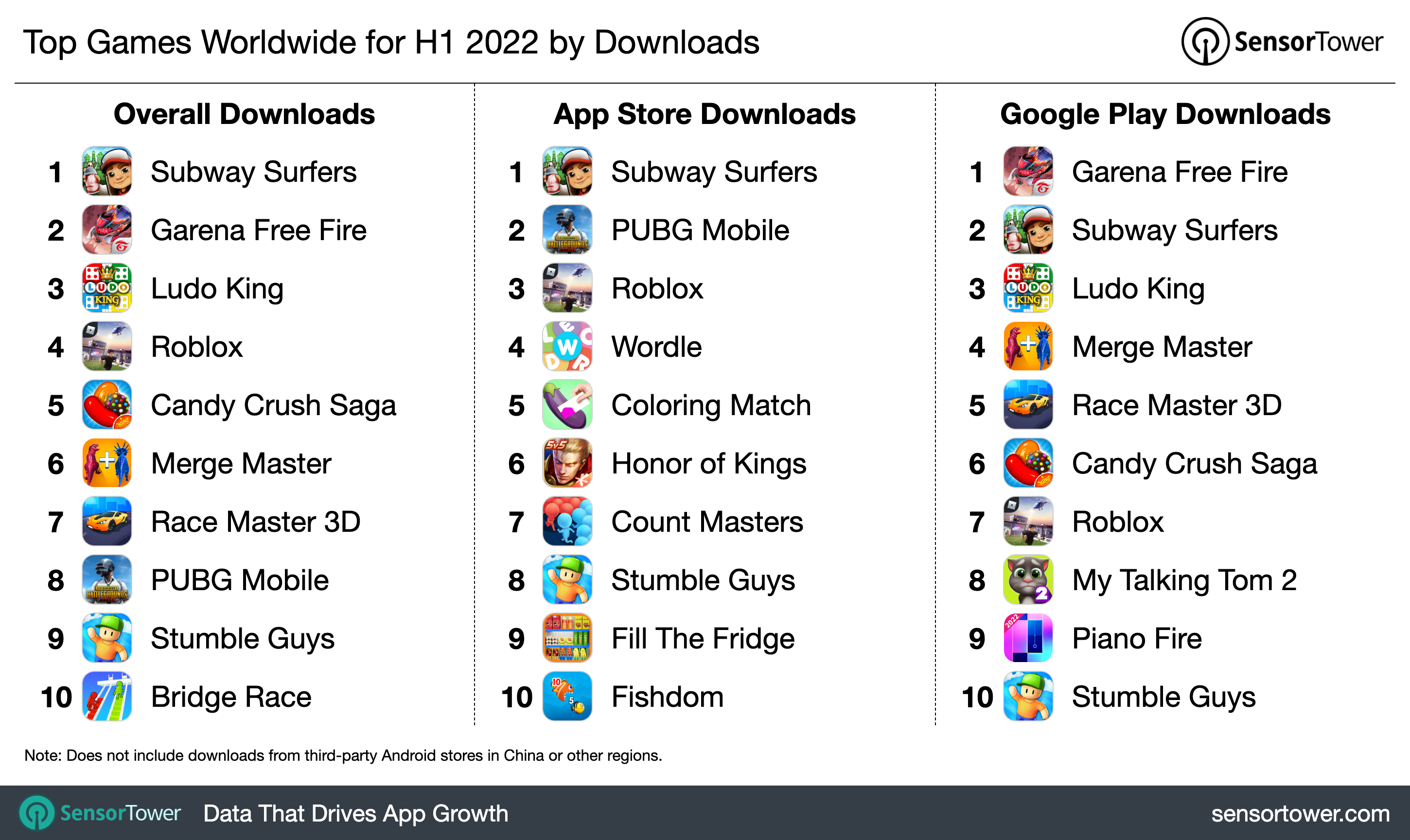 Subway Surfers leapt to No. 1 among the top downloaded mobile games in the first half of the year from its No. 6 position in the year-ago period. Recently acquired by Miniclip along with its developer, Sybo, Subway Surfers saw about 148.7 million installs, and it was followed closely by Garena Free Fire with 147.2 million at No. 2. Ludo King took the No. 3 spot with 87.7 million downloads.

Roblox and Candy Crush Saga were Nos. 4 and 5, respectively, with about 85.8 million and 82.8 million installs.

Although preliminary estimates show that growth has slowed comparatively in the first half of the year, Sensor Tower’s five-year market forecast projects that consumer spending will climb at a 12 percent compound annual growth rate to reach $233 billion in 2026.

Sensor Tower’s full report on the global app ecosystem in the second quarter of 2022 will be available soon, and it will include a deep dive into the latest trends as well as further analysis into how the current economic climate and normalization in the wake of the pandemic are affecting user behavior.