Global app adoption and consumer spending on in-app purchases, premium apps, and subscriptions across the App Store and Google Play were both relatively flat year-over-year in Q1 2022, Sensor Tower Store Intelligence data reveals. Meanwhile, the average number of monthly active users in top apps grew 4.8 percent Y/Y, with some categories, such as Medical apps, more than doubling compared to Q1 2021.

The uptick in Navigation and Travel app usage in 1Q22 can be attributed to consumers making more trips now that the pandemic is somewhat controlled in parts of the world. The increase in MAUs among the top Medical apps was mainly driven by a surge in usage of COVID-related apps such as Indonesia’s PeduliLindungi, South Korea’s vaccine passport app COOV, and Brazil’s Conecte SUS. It could also be a result of users becoming acclimated to turning to mobile devices for such purposes. 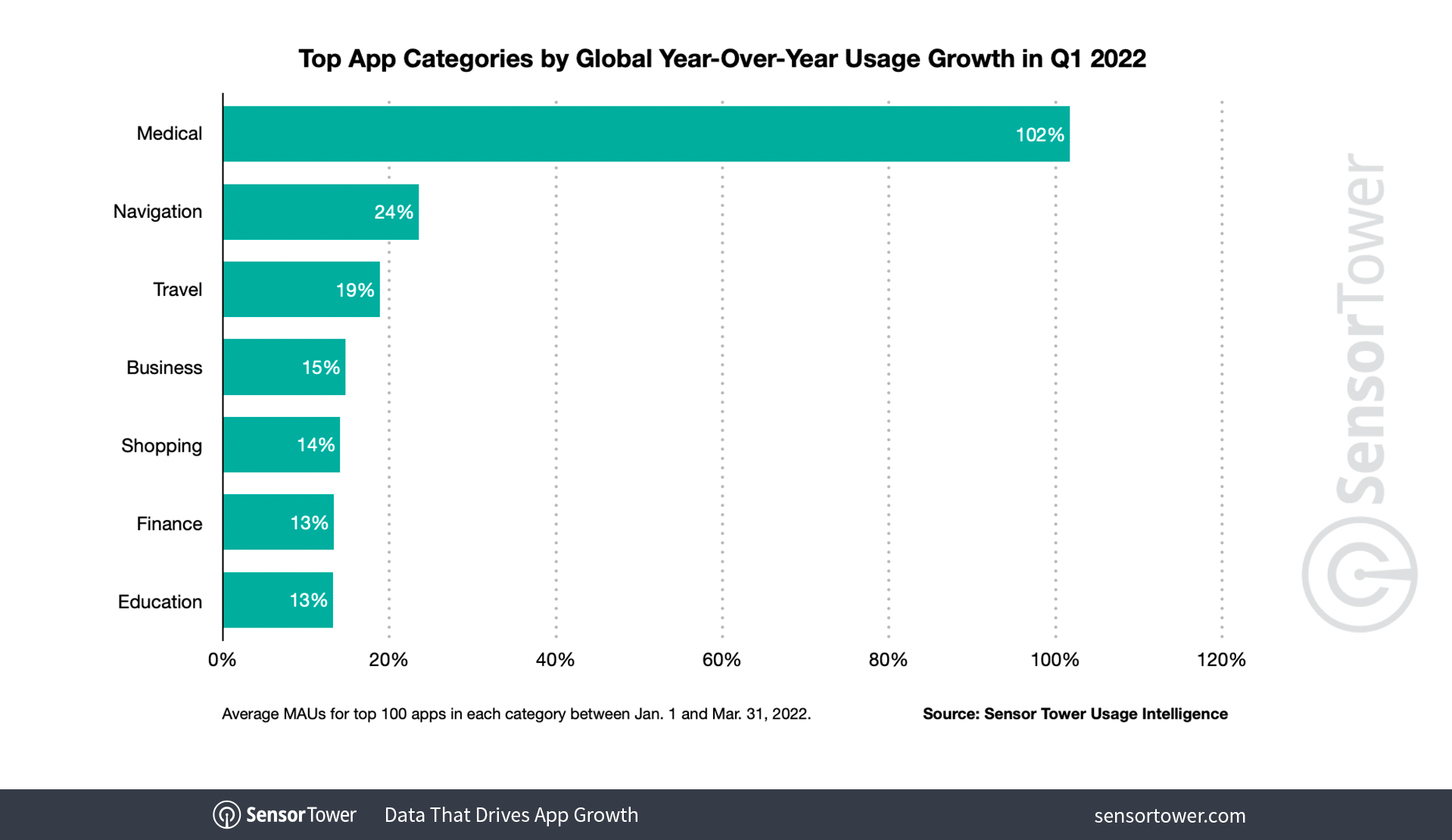 Nearly all categories studied saw an increase in usage, except for Weather, Lifestyle, News, and Games. Mobile games saw the largest decrease in usage compared to 1Q21, declining 3.8 percent Y/Y. 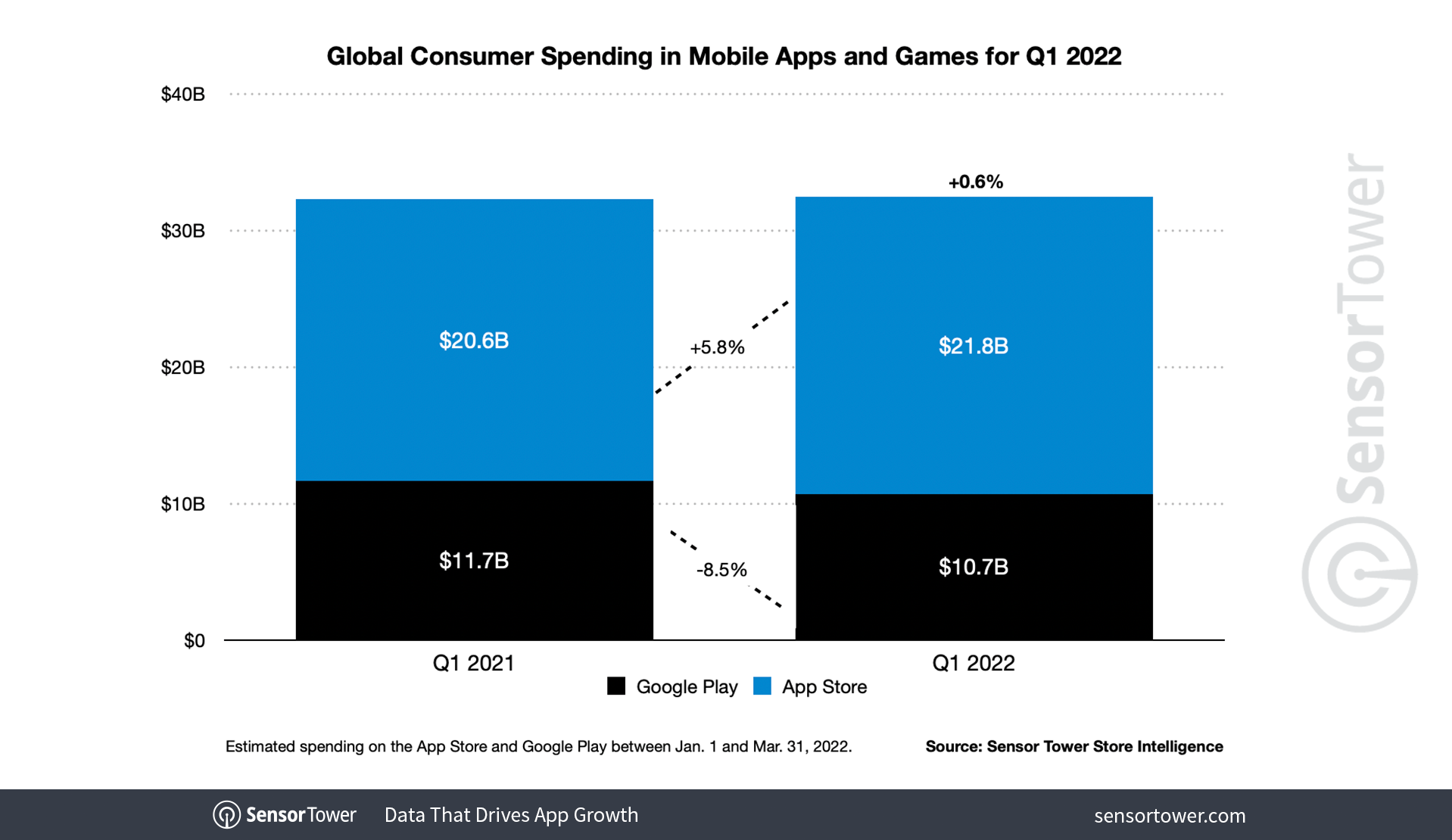 TikTok, including Douyin on iOS in China, maintained its position as the top grossing non-game app overall as well as on the App Store. Across both stores, TikTok generated $821 million in consumer spending this quarter. On Google Play, it came second to Google One, which topped the chart with nearly $250 million. 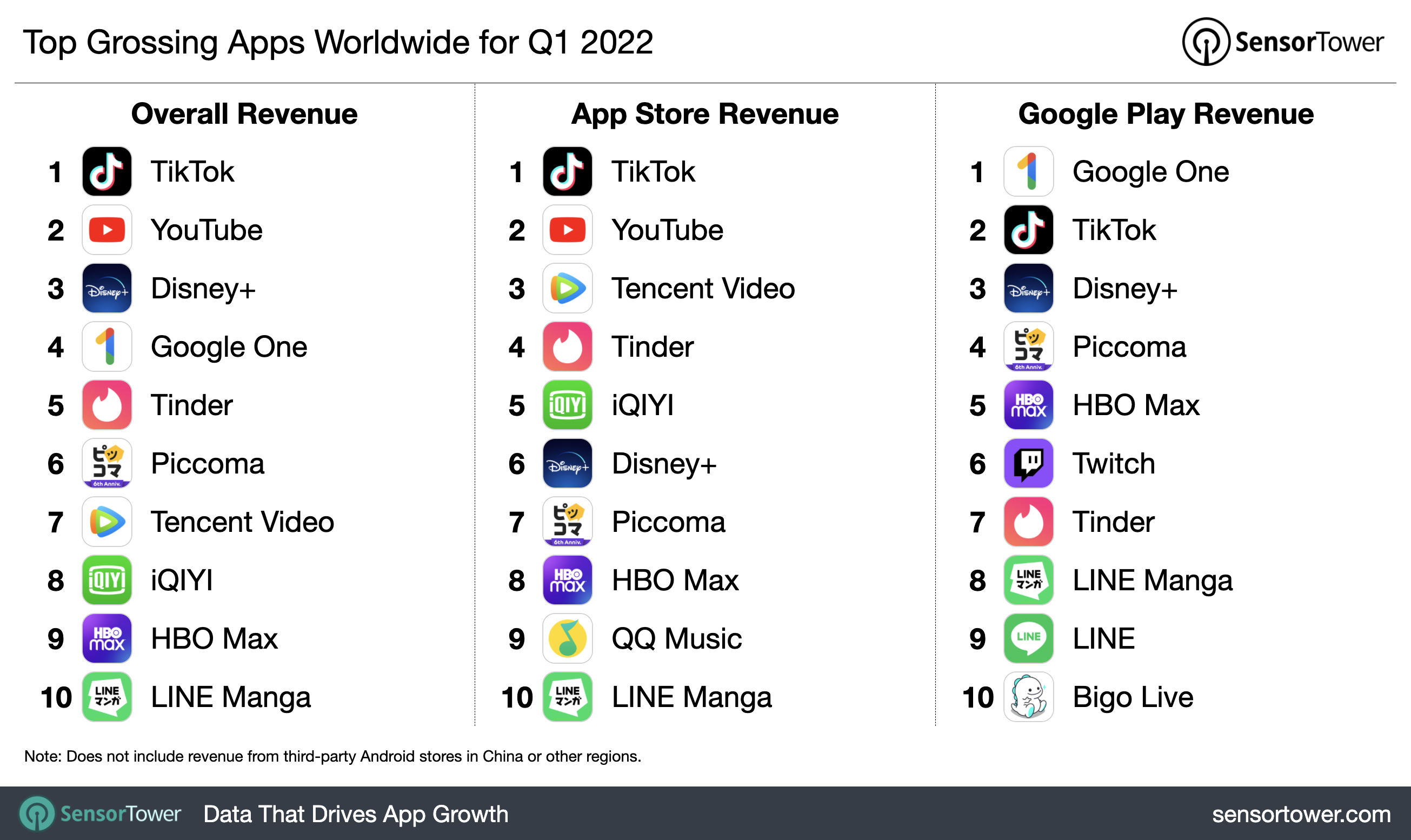 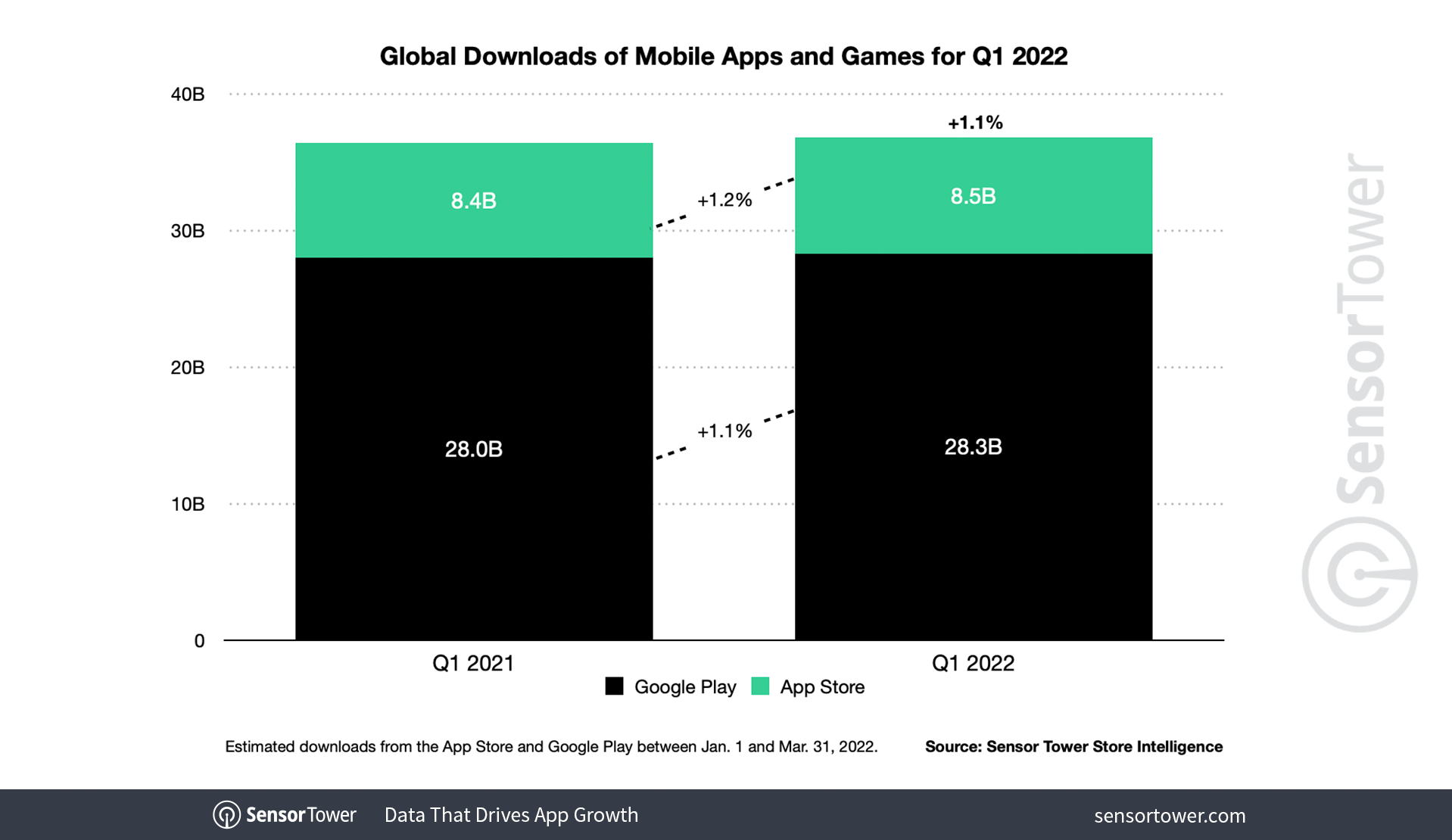 TikTok saw the most downloads across both marketplaces combined as well as on Apple’s platform, while Meta maintained its grasp on the top of the Google Play chart. In 2021, Facebook was the most downloaded app on Google Play, while this past quarter, that distinction went to Instagram, which saw 125.8 million first-time installs. Across the App Store and Google Play, TikTok saw more than 186 million installs globally. 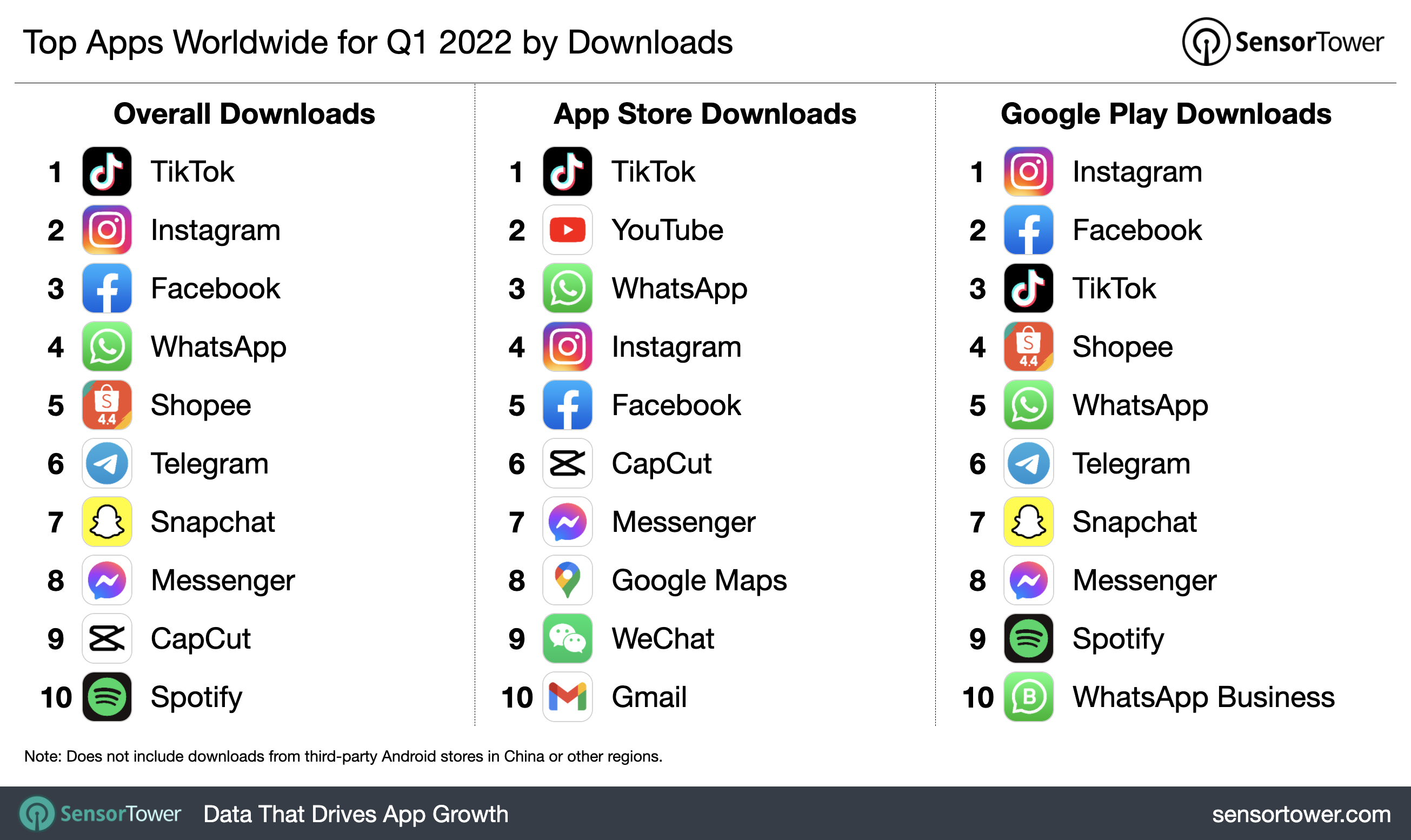 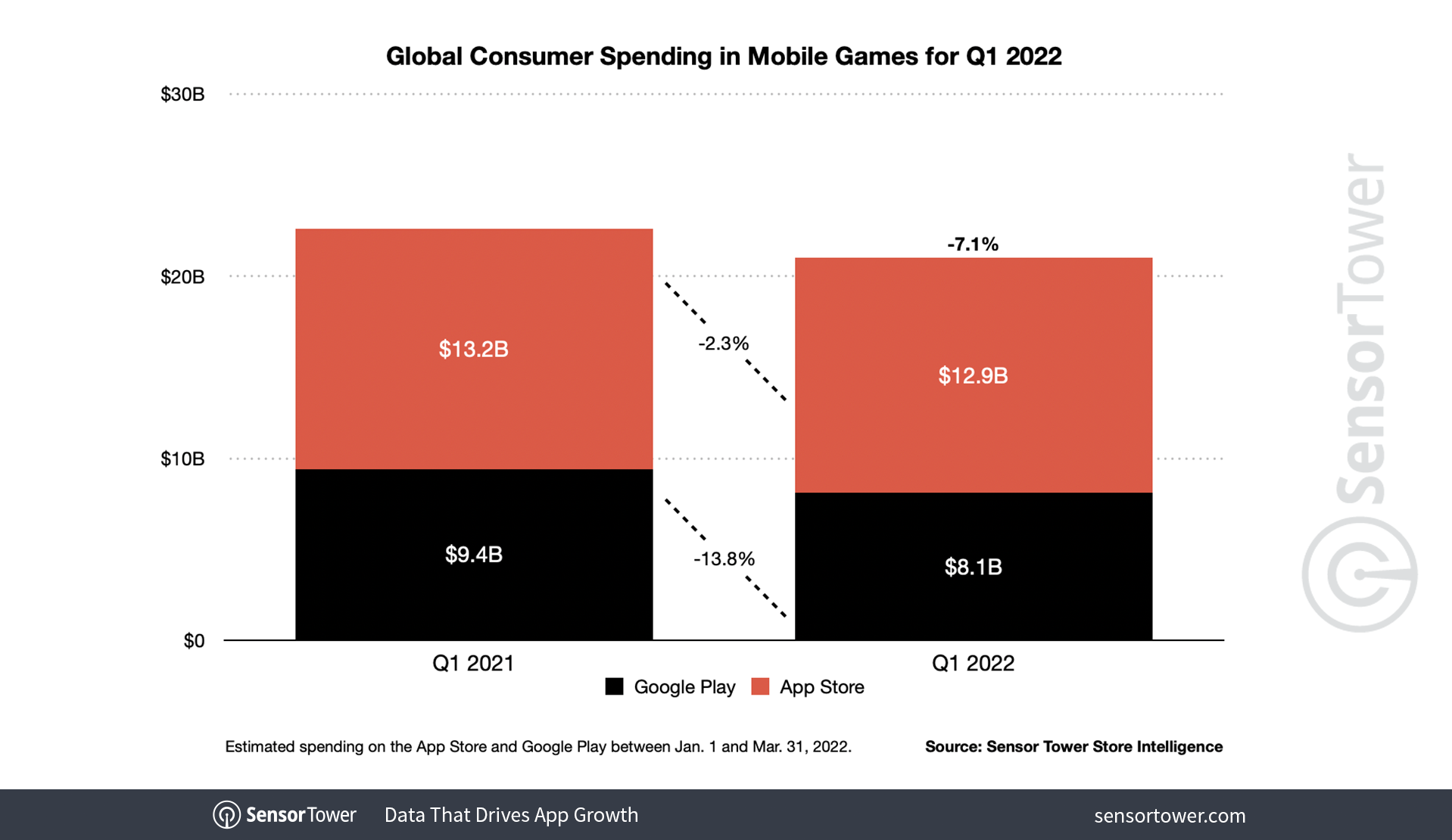 The top three highest grossing mobile games overall as well as on the App Store all came from Chinese publishers this quarter. Tencent’s Honor of Kings and PUBG Mobile—including its Chinese localization Game for Peace—came in No. 1 and No. 2 with $735.4 million and $643 million generated across both stores. MiHoYo’s Genshin Impact came in third with $551 million in player spending. 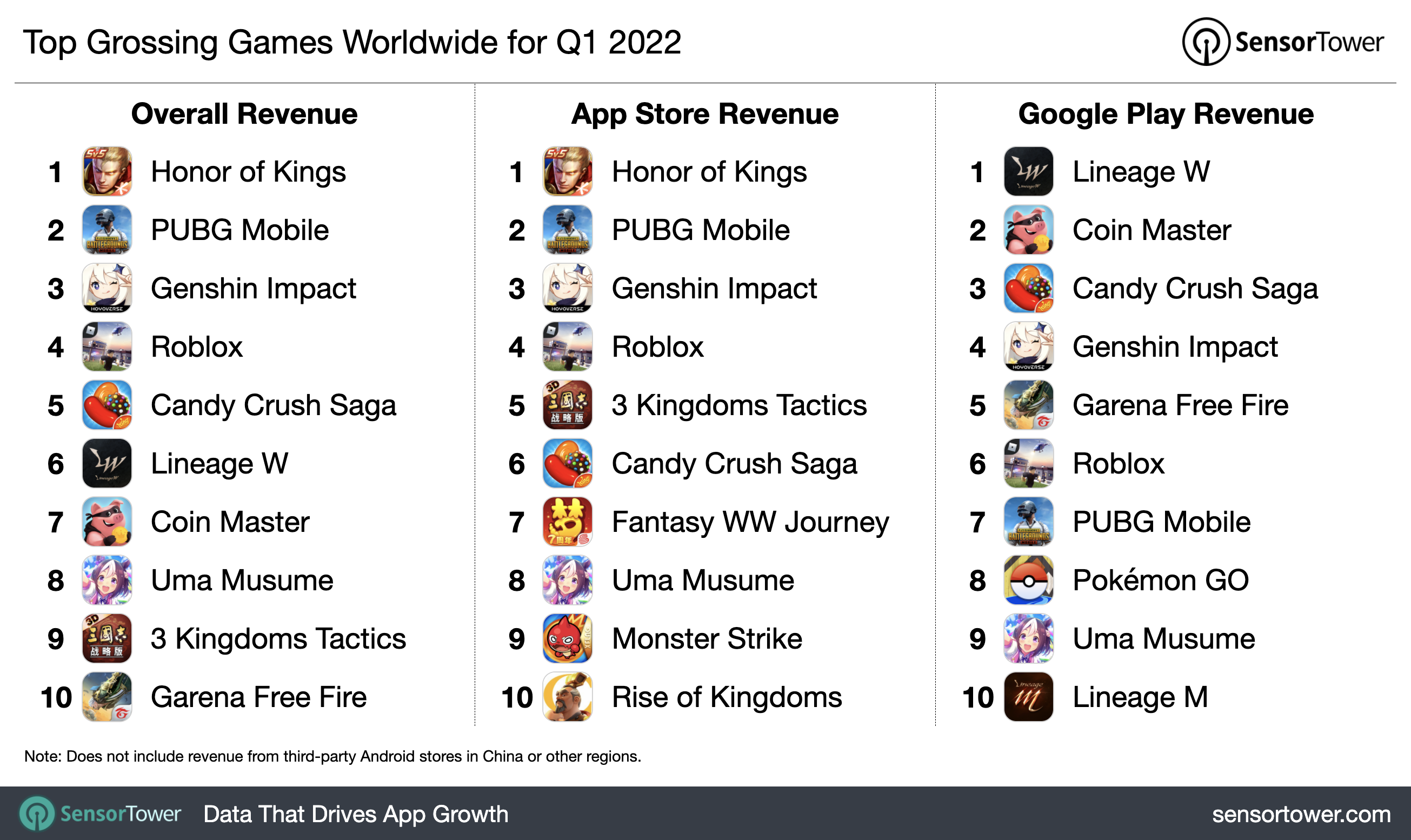 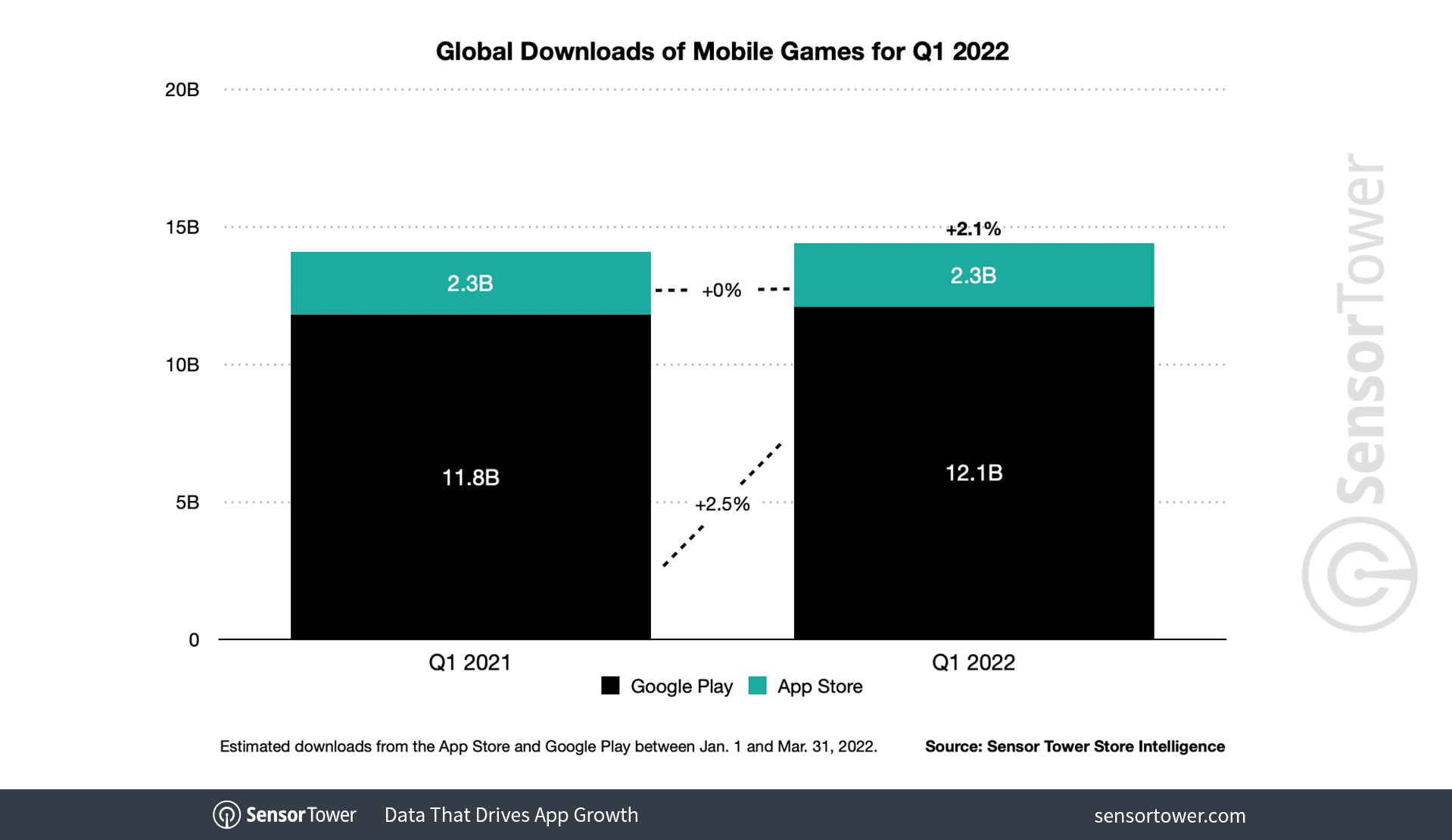 Although it wasn’t Josh Wardle’s viral version of the game, Goldfinch Studios’ Wordle! still managed to snag the No. 2 spot on Apple’s App Store with 13.8 million installs. 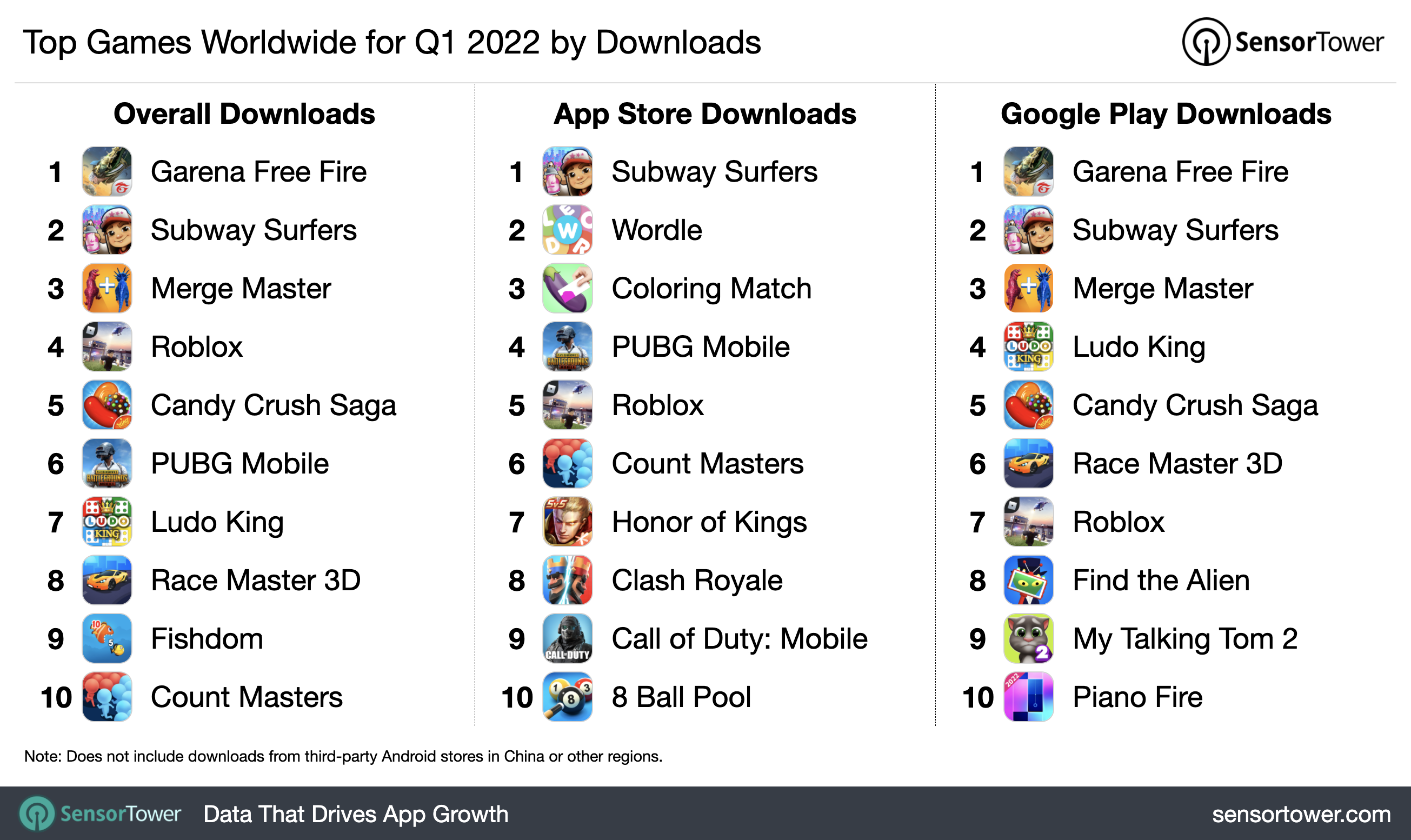 Leveraging Sensor Tower’s Pathmatics product, which tracks digital advertising on desktop and mobile display, desktop and mobile video, Facebook, Instagram, and Twitter, we also took a look to see where brands were spending marketing dollars outside of mobile apps. The top five advertisers in the United States spent approximately $786.7 million from January 1 through March 28, 2022, up 13.6 percent Y/Y from $692.3 million in the year-ago period.

The category that saw the most growth in digital advertising spend was Gaming—including console and PC platforms—which saw its brands spending 41 percent more on digital marketing campaigns across the platforms supported by our Pathmatics product in 1Q22 compared to 1Q21. It was followed by Pets, which saw 40 percent Y/Y growth, and Political, which grew 35 percent Y/Y. The top five categories that saw the most Y/Y growth in spending were rounded out by Travel & Tourism and Retail, which saw 32 percent and 31 percent growth, respectively.

The uptick in spending by the top advertisers is at least partially tied to an increased appetite for retail as the country has opened up after the vaccine rollout in 2021.

Compared to the double digit percentage growth experienced by both stores in 2021, spending growth slowed in the first quarter of 2022. This represents a normalization in the market following supercharged growth during the onset of COVID-19, as well as slowed spending possibly due to factors such as a rising cost of living. However, the categories that saw a boost due to COVID-19 have continued to see their usage climb Y/Y. Our in-depth analysis of the mobile app ecosystem and its continuing trends in 1Q22 will come soon, including additional insights into 2022's top apps, games, and publishers.