Winning an Apple Design Award at the annual Worldwide Developers Conference is a fast track to global recognition for many upcoming App Store developers—but the physical trophy is only one of the benefits winners receive. They also get top featuring during WWDC week on the App Store's home page, and now, thanks to Sensor Tower's Store Intelligence platform, we know how much of a boost the free press and marketing provides to the winning apps' downloads. In this post, we'll dive into how installs for the 12 award winners for 2016 changed after being selected by Apple.

In order to measure the effect of winning the Apple Design Award on new installs, we analyzed download estimates for the 12 winners on the U.S. App Store between June 5 and June 20—the week before and week after the winners were announced. It should be noted that two of the apps, Ulysses Mobile and djay Pro are paid apps with price points of more than $19.99, compared to a maximum $1.99 price point for the other paid apps we analyzed.

Additionally, all but two of the apps—the student winners—received "hero" banner featuring on the App Store home page for at least one day during the period of June 13 to June 7, in addition to similar banners in their respective category sections of the store.

The Benefit Can Be Massive

As a group, estimated U.S. App Store downloads of the winning apps increased by approximately 1,482 percent—nearly 16x—for the week after they received their awards compared to the week before.

Looking at growth on a daily basis, combined estimated downloads for the apps increased 552 percent on Monday, June 13 compared to the previous day's total. 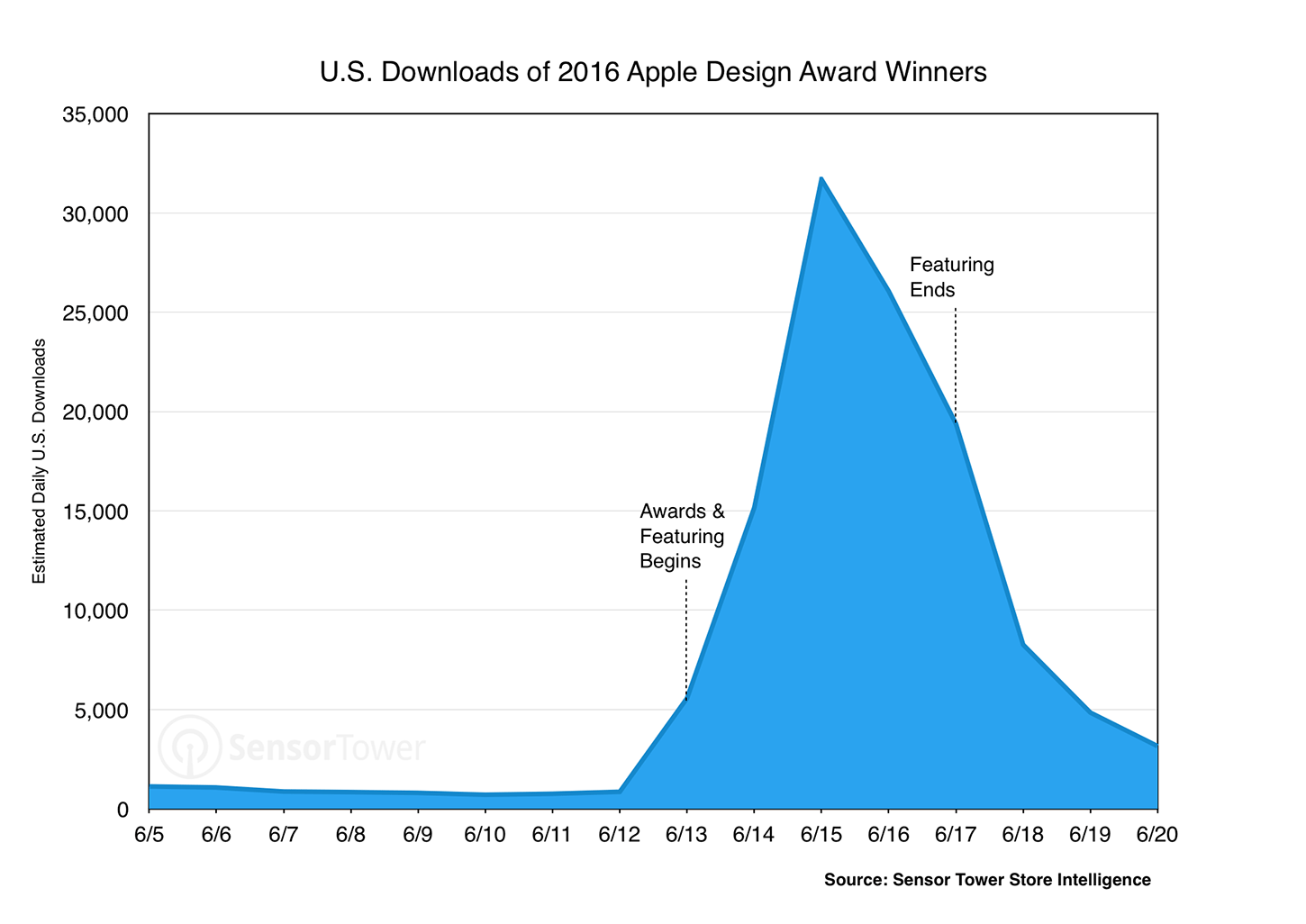 Combined downloads of the 12 Apple Design Award winners for 2016 peaked on Wednesday, June 15.

Some Winners Fared Better Than Others

Of the 10 non-student winners, Complete Anatomy for iPad saw its downloads receive the biggest boost. In the week before winning the Apple Design Award, it received less than 300 downloads on the U.S. App Store. The week after winning, it was downloaded approximately 35,000 times, an increase of more than 156x or more than 15,000 percent. 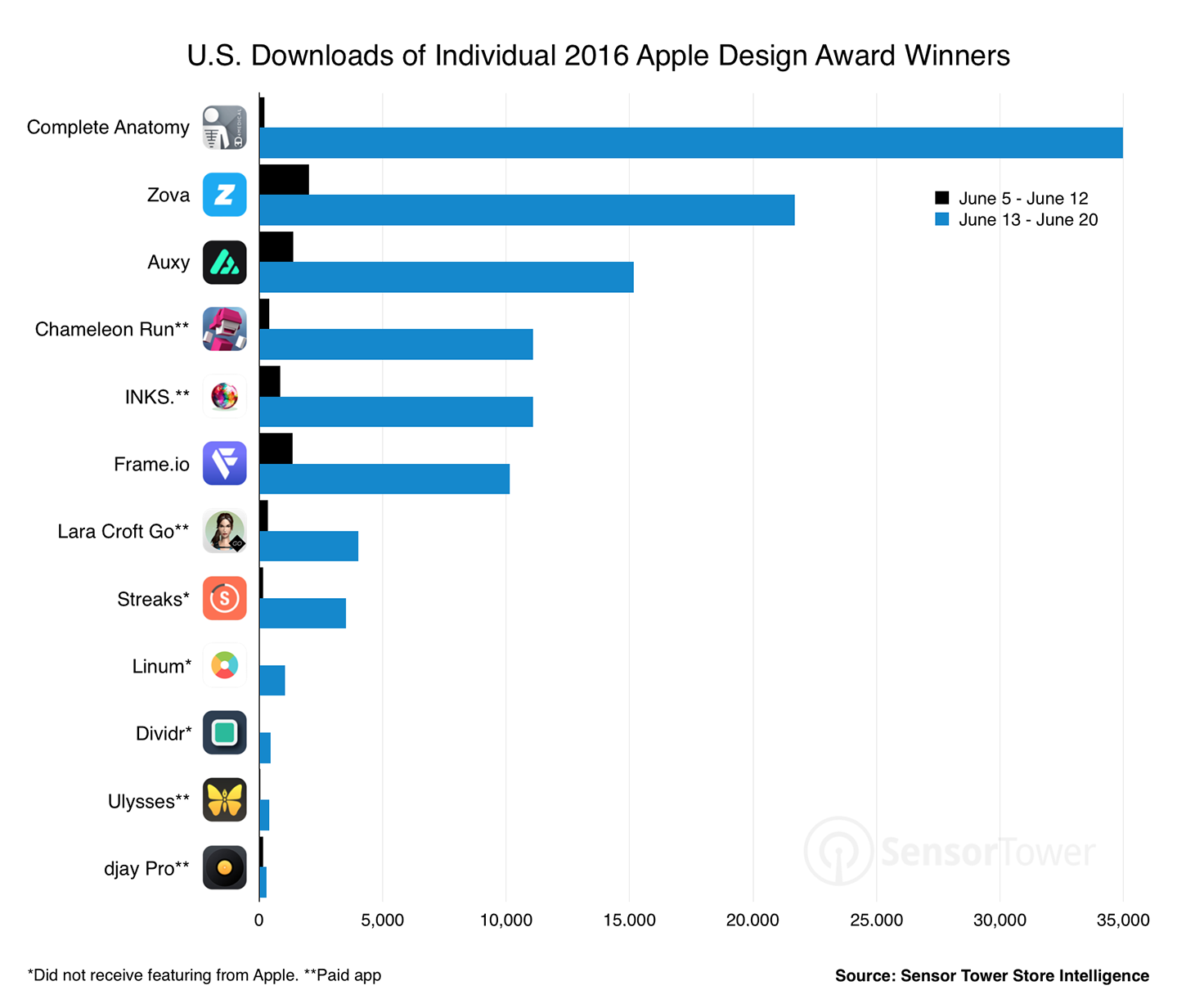 Complete Anatomy received the largest boost in installs among the non-student apps.

Other winners saw more modest gains. Estimated downloads of djay Pro increase by 1.8x for the week after it won its award compared to the week before, or approximately 87 percent, from just over 150 to just under 300.

In terms of the commercial games that took home awards, Noodlecake's Chameleon Run saw the most significant bump, growing its weekly downloads for June 13 through 20 by more than 26x, or 2,541 percent, over the previous week, from less than 500 to more than 11,000. INKS. from State of Play saw a nearly 13x increase in weekly downloads, while Square Enix's Lara Croft Go grew its weekly downloads by approximately 11x.

Looking at the student apps, Joaquin Vila's Linum might not have pulled in massive numbers following Apple's endorsement, but even without the same hero banner treatment of the other apps, its downloads grew from a handful the week before the award to more than 1,000 the week after. Dividr, from the trio of Josh Deichmann, Erik Lydick, and Patrick Pistor, went from not charting the week before it received its award to being downloaded nearly 500 times in the week following Apple's announcement.

Apple began featuring the award winners on the App Store with hero banners on Monday, June 13 and ending on Friday, June 17. Downloads of the winning apps peaked on Wednesday, June 15 and gradually declined over the rest of the week. As of Monday, June 20, estimated combined downloads of the apps had decreased for their high point to approximately 3.6 times their total for June 12.

The long-term effects of the PR and marketing boon for these apps are obviously yet to be seen, but 2015 winners—which included Fantastical 2, Robinhood, and Shadowmatic along with the already-successful Crossy Road—saw higher-than-average installs for at least two weeks after winning their awards. Needless to say, we'll be watching how each of this year's outstanding apps fares over the coming weeks.