Celebrity emoji apps grabbed the limelight this week, occupying three of the top five spots on the U.S. App Store's top paid apps chart. In this edition of our ongoing Friday column, we'll examine just how popular these fame-focused apps are, and how their unique selling points—the celebrities themselves—are playing a crucial role in their success.

The three apps in question are StephMoji by Steph Curry, Justmoji, and KIMOJI—the first one's celebrity connection is obvious, while anyone following the app ecosystem for the past six months knows that the latter is produced with the blessing of Kim Kardashian. The second app, released just today, is the official emoji keyboard of Canadian pop idol Justin Bieber. And it debuted at No. 1 in paid apps, knocking Curry's app from the top spot.

StephMoji is from Appmoji, which also produced MuvaMoji by Amber Rose (previously covered in this column). As you can see in the App Intelligence category ranking history below, it debuted on June 2 at No. 79 in paid apps, and within four hours had reached No. 1 with a $1.99 price point. 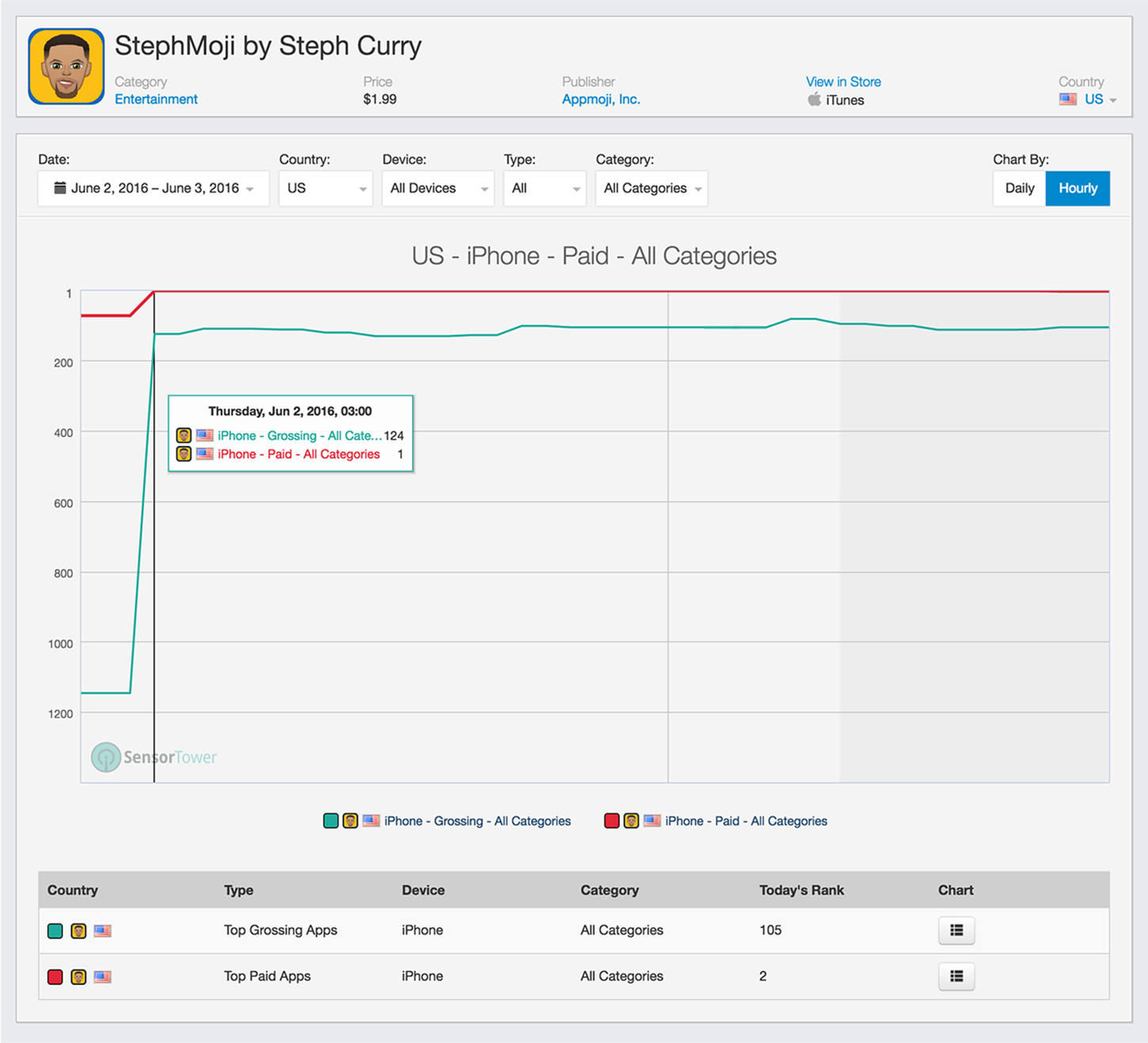 StephMoji reached No. 1 in top paid apps within four hours of its release.

By comparison, Justmoji shot directly to the top of paid apps following its release, this despite a price tag $1 more than the typical $1.99 going rate for a celebrity-backed emoji keyboard. While his app is receiving prime featuring via an App Store hero banner from Apple, Bieber's potent social media presence has no doubt driven considerable downloads. The day prior to the app's launch, he tweeted the following to his more than 82 million Twitter followers, generating more than 39,000 retweets:

This simple tweet kicked off a viral swarm of buzz around Bieber's impending app, to the tune of more than 39,000 retweets and 66,000 likes.

The power of ongoing celebrity endorsement to drive installs of these apps can perhaps best be witnessed by looking at KIMOJI's recent resurgence on the charts. A mainstay of the top 100 paid apps since its release last December, the app has seen a slow decline in its ranking among paid apps since late February, exiting the top 50 in recent weeks. On Tuesday, Kardashian took to Twitter to announce that new "kimojis" were coming soon, news that was quickly shared by the rest of her famous family, including siblings Kendall and Kylie Jenner, who themselves have seen their share of success on the App Store.

Within two days, KIMOJI vaulted from No. 88 to No. 2 in paid apps, and No. 1,245 to No. 102 in top grossing apps. As you can see in the Store Intelligence chart below, that translated in an increase in daily revenue on the U.S. App Store of more than $12,000, or more than 2,800 percent from the day before her original tweet: 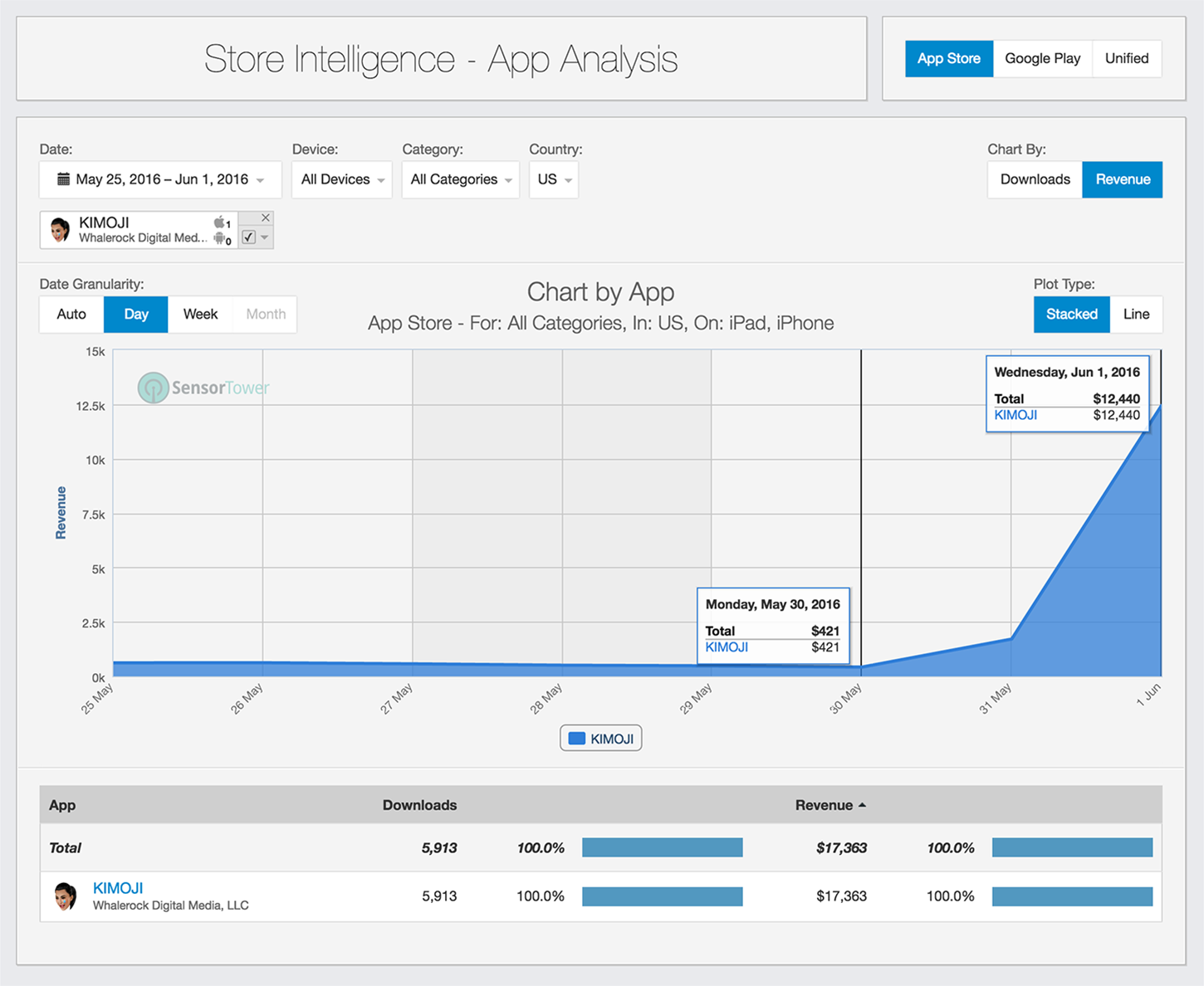 The Kardashian family's social push on KIMOJI led to a nearly 30 times increase in daily revenue for the app in two days.

The Kardashian clan's tweets about KIMOJI cascaded into profuse media coverage over the past few days, including major outlets poring over the apps' best new emojis. With that said, it's important to remember when looking at the success of these apps that, apart from their App Store featuring and traditional marketing, the common component they all share is the continuing involvement of the famous individuals that have lent them their likenesses.

This is an analysis for another day, but the safe bet is that without the torrent of tweets and retweets by these celebrities and their famous friends (and families), the fervor shown by fans to download them wouldn't be the same. Having a world renowned celebrity to do your marketing is a beneficial luxury few App Store publishers can claim, but we may find that one with an especially formidable, persistent social presence is an even more powerful tool to have in one's arsenal.

In the meantime, we'll await the next big emoji app. Any bets on whose it'll be?