A record-breaking eight mobile games including PUBG Mobile from Tencent, Honor of Kings from Tencent, and Genshin Impact from miHoYo have generated more than $1 billion globally from the App Store and Google Play so far in 2021, Sensor Tower Store Intelligence data shows.

PUBG Mobile, localized as Game For Peace in China and Battlegrounds Mobile in India, and Honor of Kings rank as the No. 1 and No. 2 revenue generating mobile titles worldwide this year, accumulating $2.8 billion each so far this year, up 9 percent and 14.7 percent year-over-year, respectively.

Ranking at No. 3 this year is Genshin Impact, which has stormed to $1.8 billion in revenue so far in 2021. Launched on September 28, 2020, publisher miHoYo has continued to provide the game with a plethora of updates, regularly adding new islands, characters and features to keep players engaged. September’s Version 2.1 release showed just how effective these updates can be, with its launch sparking a five times increase in player spending week-over-week. To date, Genshin Impact has generated $2.4 billion worldwide from the App Store and Google Play. 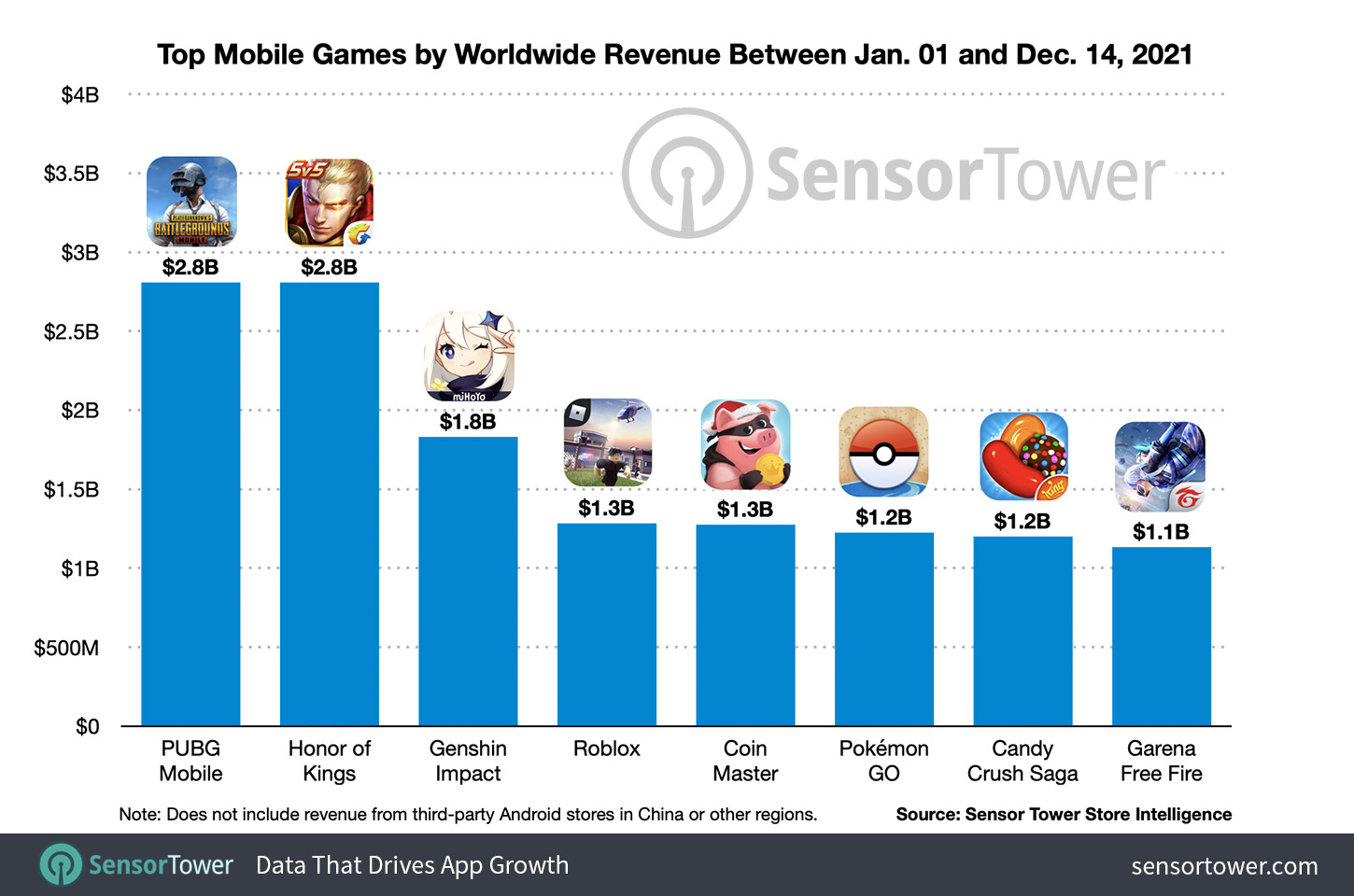 Roblox from Roblox Corporation ranks at No. 4 having picked up $1.3 billion on mobile so far this year, a rise of 20.3 percent Y/Y, while Coin Master from Moon Active ranks No. 5, accumulating $1.3 billion, a rise of 13.8 percent Y/Y.

Ranking at No. 6 is Pokémon GO from Niantic, which has generated $1.2 billion, putting the title on track for its best year ever, more than five years on from its launch. Rounding out the billion dollar hits are Candy Crush Saga from King at No. 7 with $1.2 billion, while Garena Free Fire from Garena has shot past $1.1 billion in worldwide player spending to reach No. 8. There could yet be a ninth mobile title to cross the $1 billion milestone in 2021, with Uma Musume Pretty Derby from Cygames closing in on the landmark at close to $965 million for the year, despite launching in February this year and only being available in Japan.

The eight mobile titles to have already crossed $1 billion is up on the five games that hit the figure in 2020, and marks a significant increase from the three that achieved unicorn status in both 2019 and 2018.

This year has seen the mobile games sector build on 2020’s outsized gains with further revenue growth across the market, and in spite of headwinds such as those posed by Apple’s IDFA changes on iOS. Sensor Tower forecasts that mobile game spending will reach $89.6 billion worldwide across the App Store and Google Play by the end of 2021, a rise of 12.6 percent Y/Y. This increase in revenue has been powered by titles both new and old, with each of these billion dollar hits showing just how diverse the market and its enormous audiences are, and once again how important a solid live operations strategy is for long-term success and sustainability.