Supercell is a self-professed "serial killer" of underperforming prototypes and soft-launched titles, so when its latest beta, Brawl Stars, hit Canada's App Store late last month, players and analysts alike were cautiously optimistic about the game's prospects for a global launch. Based on analysis of Sensor Tower Store Intelligence data on the soft launch thus far, we can say that it's significantly outperforming the soft launches of the publisher's publicly canceled projects—and is within spitting distance of the soft launch success of Clash Royale in one very important metric: average revenue per download. 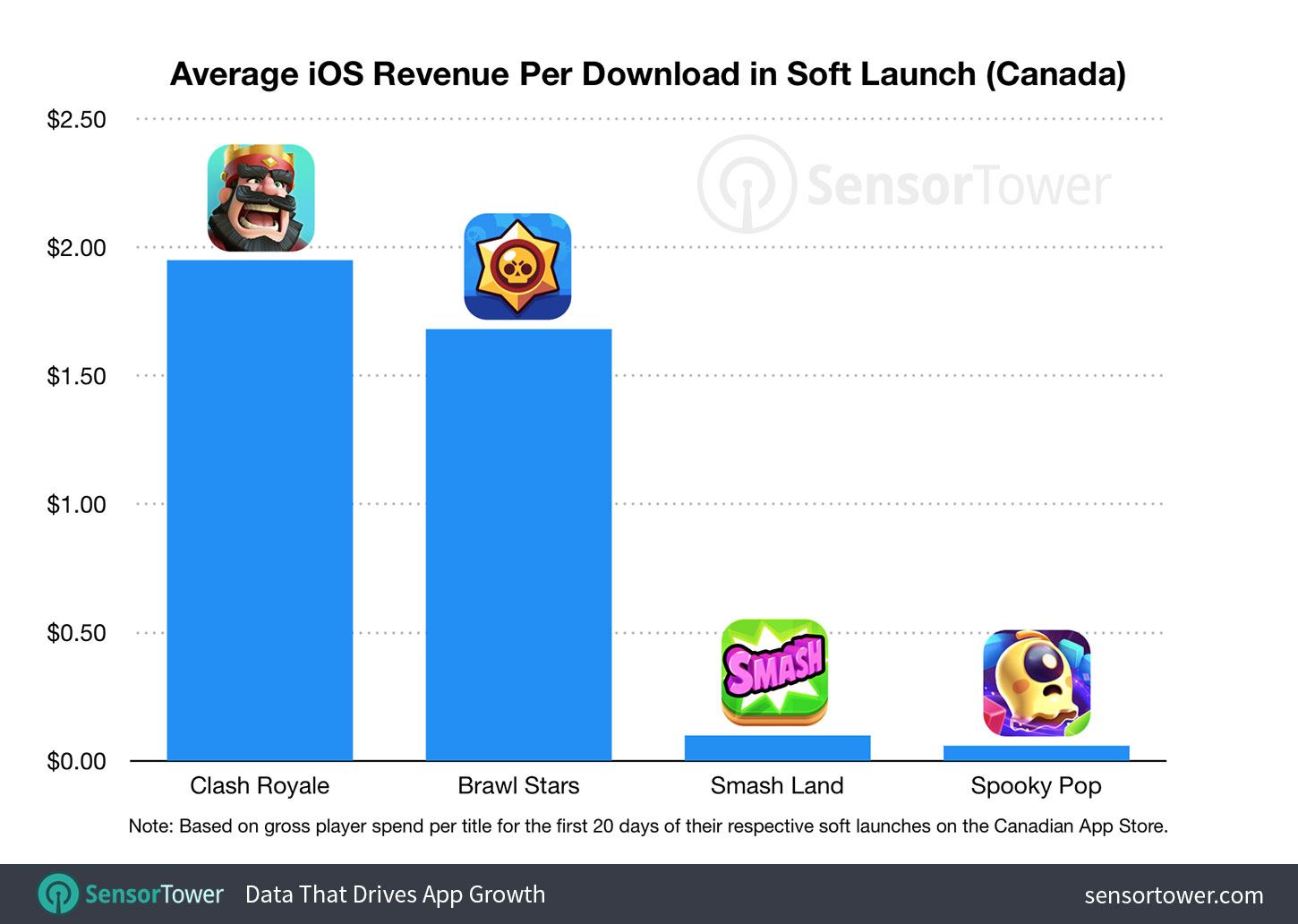 As the above chart illustrates, Brawl Stars has averaged an estimated US$1.68 in gross player spend per download in its first 20 days of soft launch in Canada (where it's only available on iOS). This compares favorably to the average of US$1.95 achieved by Clash Royale on iOS during its initial 20 days on the Canadian App Store. It's also a vastly more favorable ratio than those managed by Supercell's soft launches prior to Clash Royale, the since-canceled Spooky Pop and Smash Land, both of which saw players spend less than 20 cents per download on average in their first 20 days.

Of course, these are still early days for the soft launch, and Supercell will obviously be considering the long-term revenue prospects for Brawl Stars (not to mention other metrics, including engagement) before deciding its fate. After all, as the video linked above makes clear, one of the publisher's key deciding factors for green-lighting a global launch is "will this be a game people will play for years and years?".

So far, players are answering in the affirmative with their wallets (or would be but aren't, because they downloaded the game outside of Canada and can't monetize) and in their App Store reviews. The latter currently number more than 4,000 and are 92 percent positive, compared to the 82 percent positive sentiment Clash Royale had during its first 20 days of soft launch with a comparable number of reviews. Supercell is also clearly keen to get the fledgling title in front of as many beta players as possible, as our Ad Intelligence data currently has Brawl Stars as the No. 2 app install advertiser on Facebook's advertising network in Canada.

We'll be keeping a close eye on this very promising title as its soft launch continues—and not just because we're not-so-secretly rooting for a global release.