ByteDance’s portfolio of mobile games has generated more than $1 billion worldwide from player spending across the App Store and Google Play during the past 12 months, Sensor Tower Store Intelligence data reveals.

The company is most famous for its TikTok app, which has accumulated close to 3.7 billion downloads to date and $5.4 billion from consumer spending, not including the Android version of its Chinese twin, Douyin. Over the course of roughly two years, the company has expanded into mobile games publishing as it looks to diversify its business and challenge industry giants like Tencent and NetEase. It has launched subsidiaries such as Ohayoo and Nuverse, in addition to acquiring games companies like Mobile Legends: Bang Bang developer Moonton and Girls Chronicle: Idle Heroine studio C4 Connect. The latter studio also developed Red Alert Online, which is published by Tencent.

As well as generating more than $1 billion, ByteDance’s mobile titles have generated approximately 139 million installs between June 21, 2021 and June 20, 2022. (Sensor Tower data does not include estimates for mobile ad revenue, or player spending from third-party Android stores, such as those available in China). 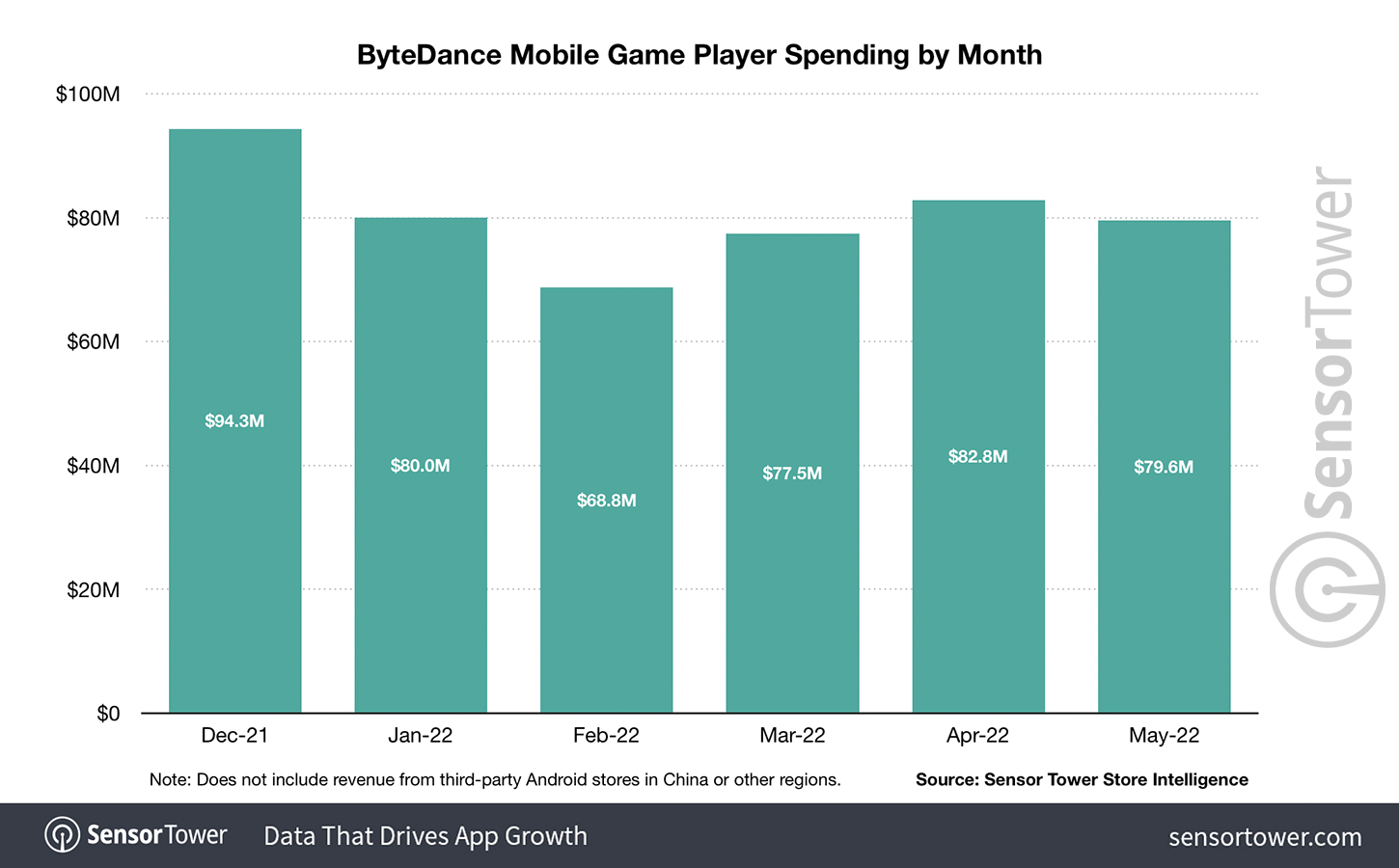 Mobile Legends: Bang Bang is the most successful mobile title in ByteDance’s portfolio, picking up more than 78 million downloads over the last year, accounting for about 56 percent of all installs. It’s followed by Ragnarok X: Next Generation at No. 2 and another Moonton game, Sweet Crossing: Snake.io, at No. 3.

Mobile Legends: Bang Bang is also the company’s most lucrative title during this period, generating $317.7 million over the past year, accounting for approximately 32 percent of player spending in ByteDance’s mobile games. Girls Chronicle: Idle Heroine ranks closely behind at No. 2 for revenue, while Mobile Legends: Adventure ranks No. 3.

Indonesia ranked as ByteDance’s top country for downloads over the past year, accounting for approximately 25 percent of the company’s total mobile game installs. driven by Mobile Legends: Bang Bang, which ranked No.2 for mobile game installs in the region during this period. China, meanwhile, ranked No. 2 for downloads (App Store only), with the Philippines rounding out the top three.

ByteDance’s largest market for player spending during the last year is Japan, which accounts for about 34 percent of its total revenue from mobile games. This is largely driven by Girls Chronicle: Idle Heroine from its acquisition of C4 Connect, with the title ranking as the No. 10 mobile game in the country during the past year. China ranked as the No. 2 country for revenue, while the United States ranked No. 3.

ByteDance is one of a number of companies in the tech space that originated from outside of gaming and now has its eyes on the sector. One recent example is streaming giant Netflix, which recently surpassed 13 million downloads for its venture into mobile games–not including installs from its acquisitions of developers such as Night School Studio and Next Games.

Finding the right games and partners can prove to be highly lucrative, with the purchases of Moonton and C4 proving particularly transformative for ByteDance’s games business, although M&A can be a costly affair. How ByteDance will build upon this in future to become a true challenger to other heavyweights in China and around the world remains to be seen, particularly in the face of regulatory challenges at home. But the company built on TikTok has certainly shown it’s not shy in its gaming ambitions.