Apps with a focus on finding friends such as Wink, Yubo, and Hoop were the top social apps in 2020 by Y/Y growth in installs. This surge in adoption was driven by younger users. Whereas the top 100 social apps saw their installs decrease among users aged 30 and above, younger users between age 22 and 27 downloaded nearly twice as many social apps when compared to 2019. 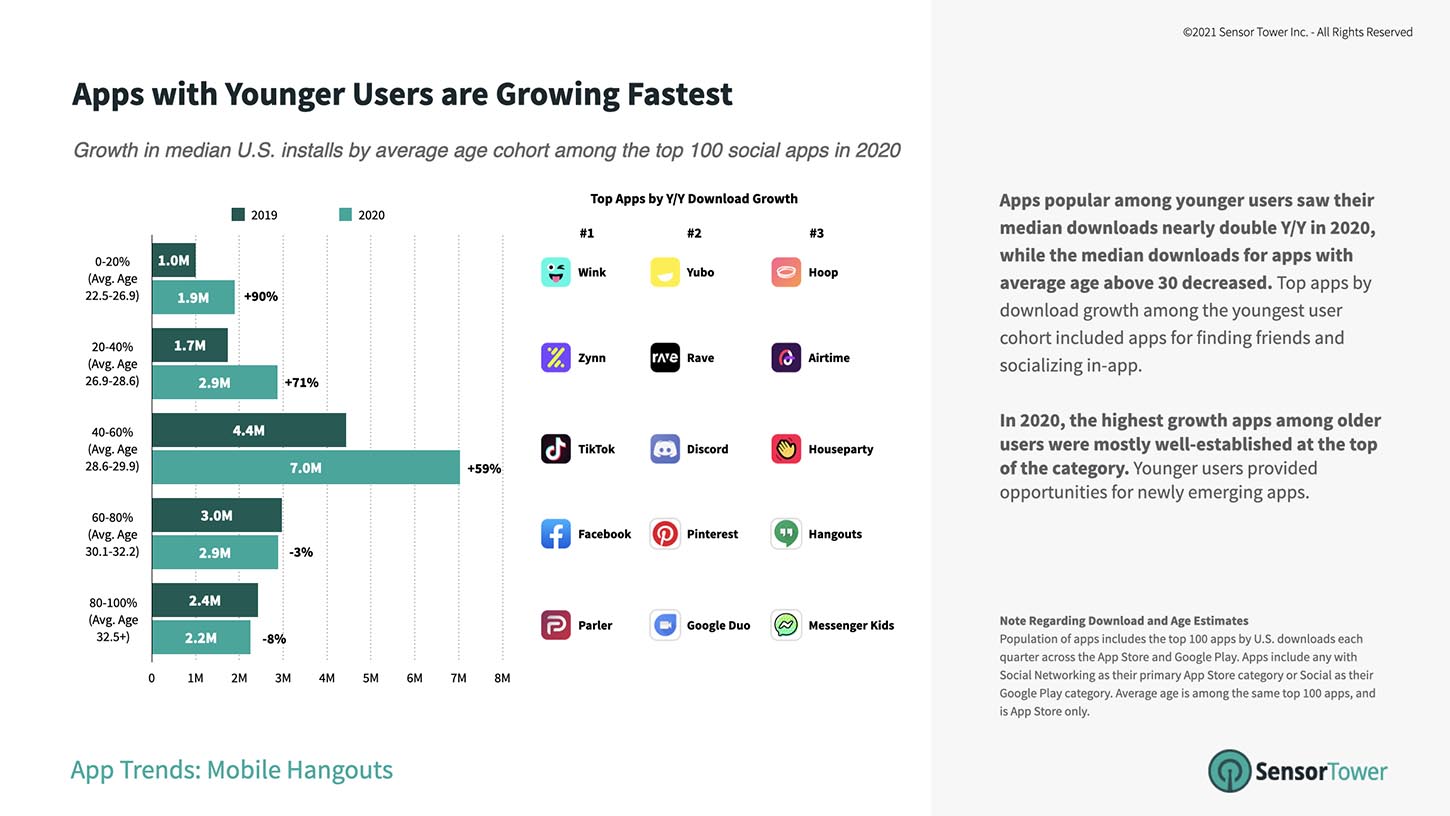 Even before the coronavirus pandemic, in-app subscription revenue was on the rise. As mobile publishers found themselves shifting their strategies to retain and appeal to consumers, subscription models have become even more prevalent. Eight out of the 15 top grossing mobile games in 2020 offered in-app subscriptions, including the top two grossing games of the year. 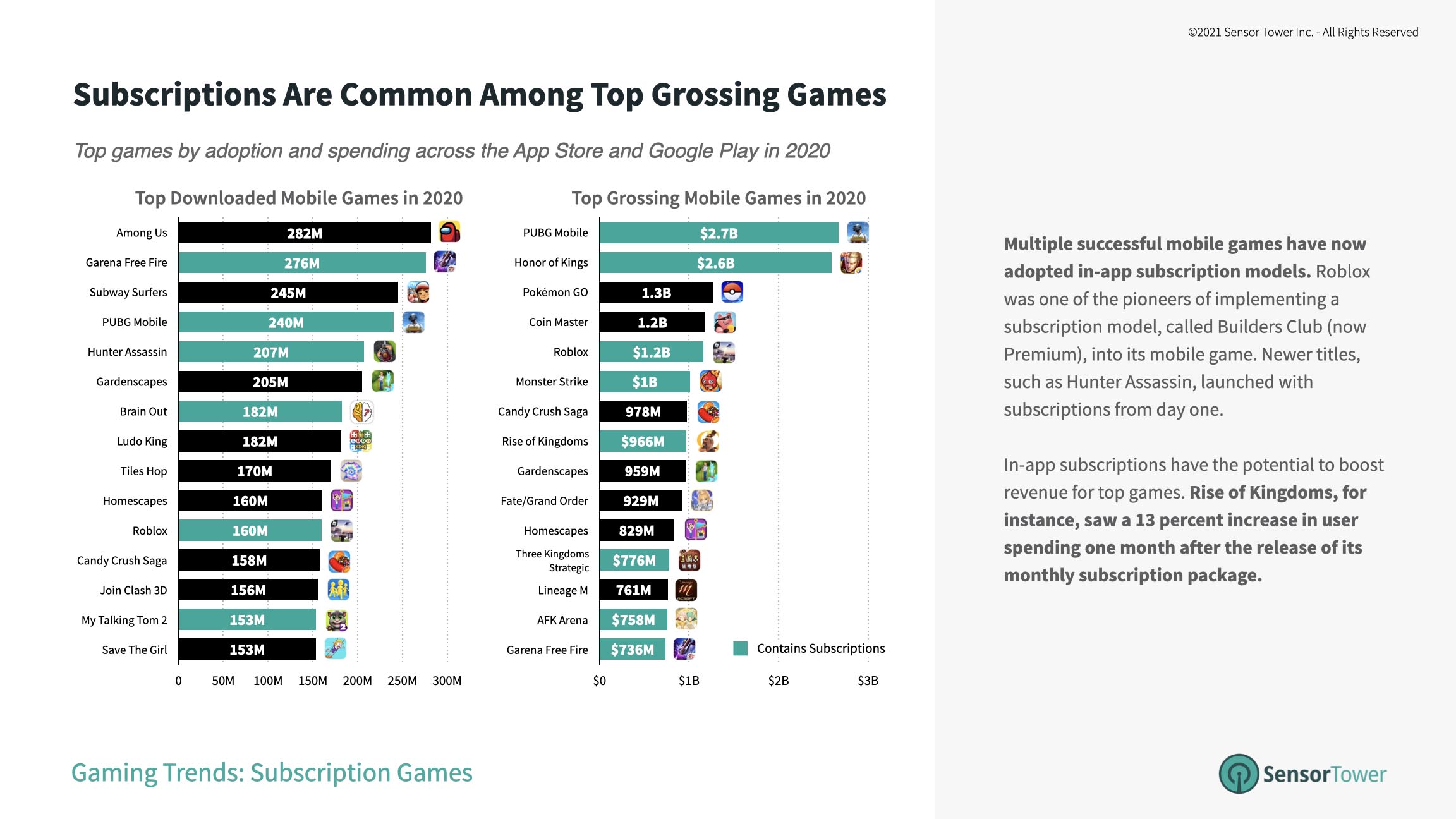 Tencent's PUBG Mobile and Honor of Kings were the two highest grossing games of 2020 with $2.7 billion and $2.6 billion in consumer spending, respectively. However, it wasn't just the perennial chart toppers that incorporated in-app subscription models. Newcomers such as Ruby Game Studio's Hunter Assassin, which reached 207 million installs last year, launched with subscriptions available. 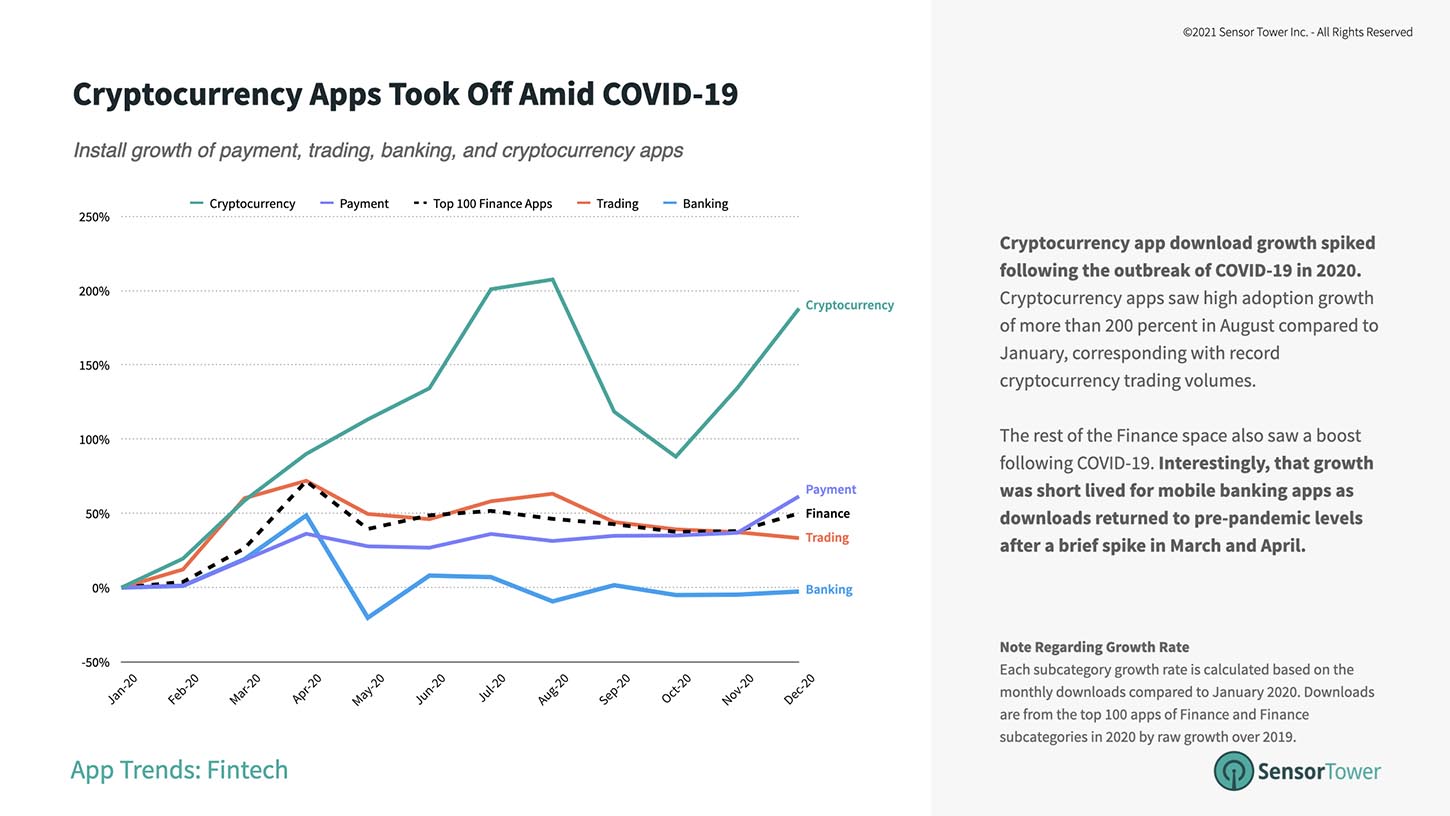 Consumers spent more time than ever at home in 2020 as living rooms became classrooms and offices. Corresponding with this shift in lifestyle, the top 10 smart home apps saw adoption climb throughout 2020, collectively reaching 151 million global downloads by the end of the year. Google Home and Amazon Alexa were the big winners in the category, accumulating 60 million and 36 million installs, respectively. 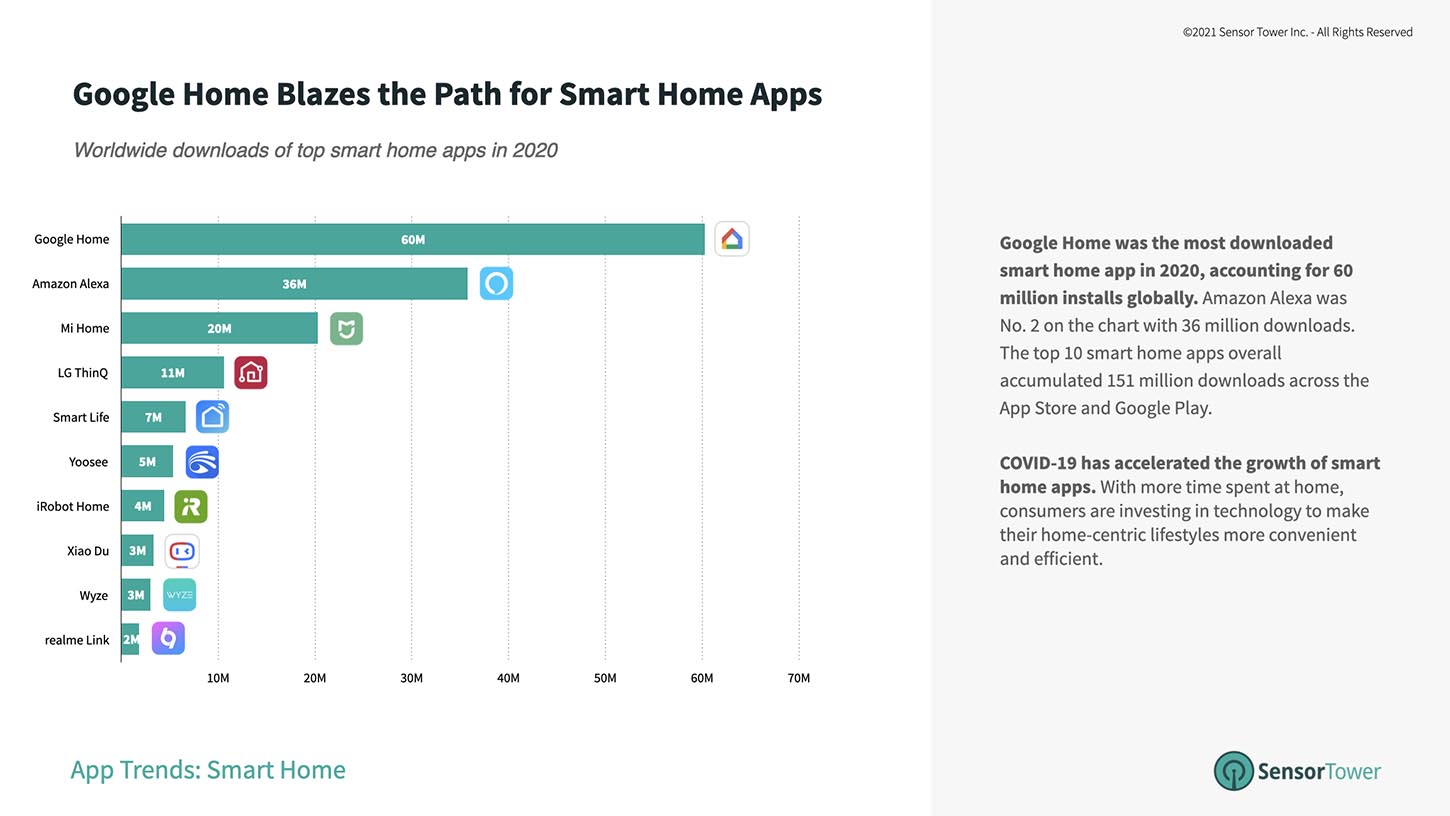 Hypercasual Games Continue to Flourish Ahead of IDFA

It's no surprise that hypercasual games boomed as consumers found themselves sheltering in place and turning to mobile devices for entertainment. The top 1,000 titles in the genre collectively grew 57 percent year-over-year to 10.5 billion installs in 2020. 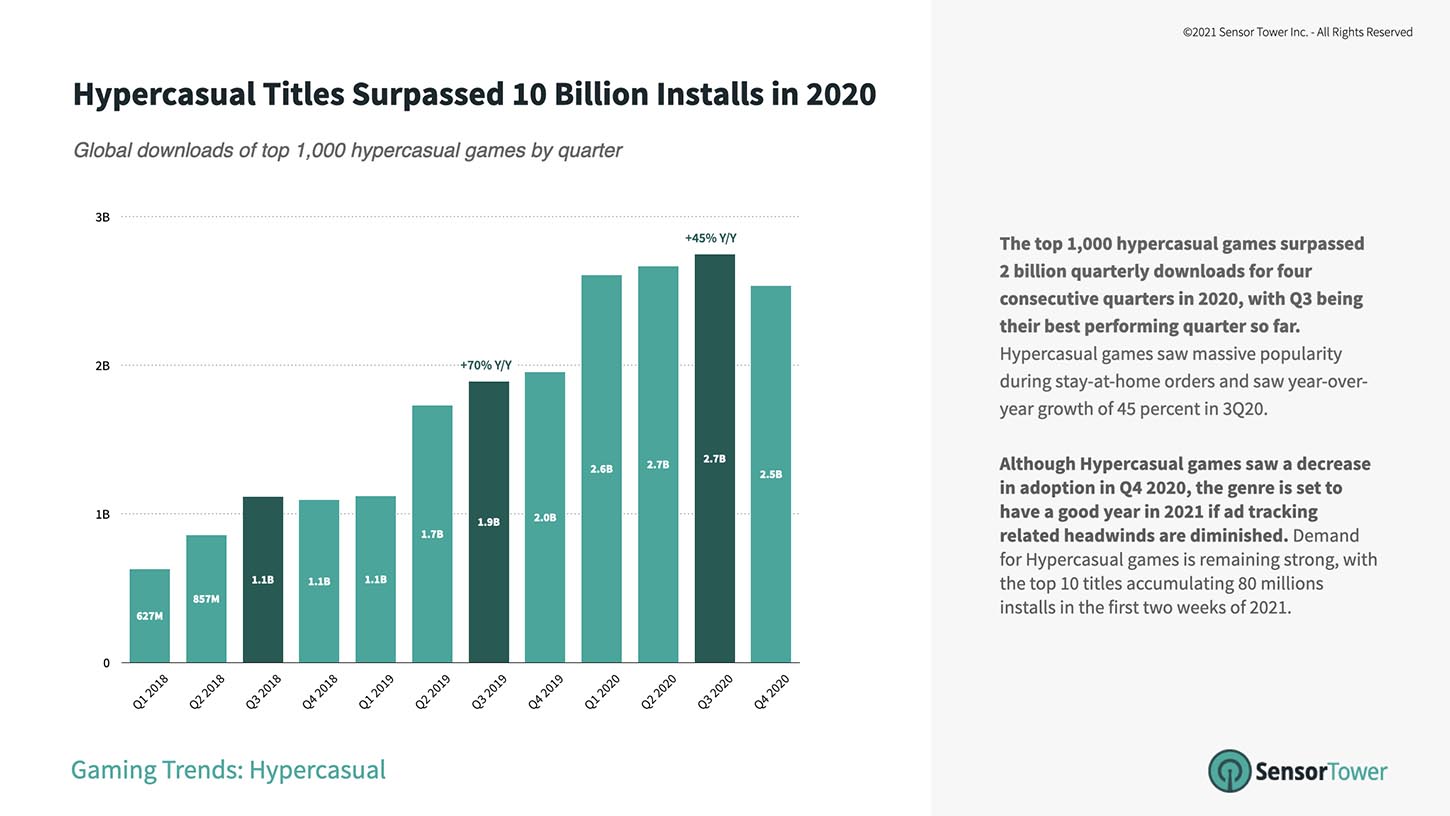 While the category trailed behind breakout titles such as InnerSloth's party game hit Among Us, the top titles still exceeded 100 million installs. Supersonic Studios' Join Clash 3D was the top hypercasual game, hitting 156 million installs for the year. It was followed by Lion Studios' Save the Girl with 153 million and Azur Interactive Games' Worms Zone with 132 million.

For more insights on the latest industry trends, download the report in PDF form below: