The title hit the $3 billion milestone in late July, following a surge in global revenue amid the global COVID-19 pandemic and lockdowns. So far in 2020 alone, the game has accumulated $1.8 billion from player spending and picked up 198 million downloads. The latest landmark of $3.5 billion includes combined global PUBG Mobile revenue, and player spending from the title’s Chinese localization, Game For Peace. 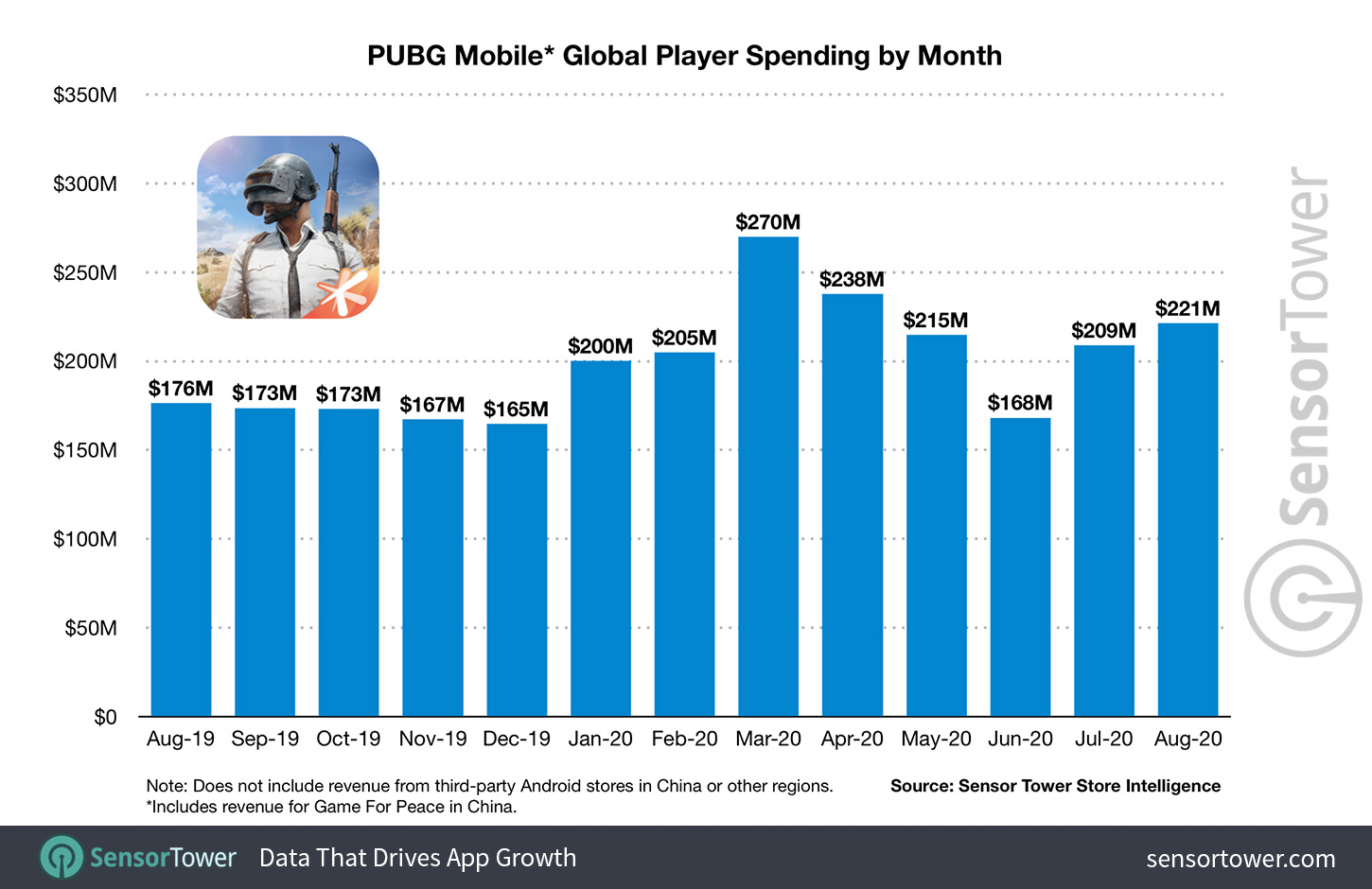 As we noted in our previous blog post on the State of Mobile Battle Royale in 2020, from January 1, 2020 to August 13, 2020—the day that PUBG Mobile’s rival Fortnite from Epic Games was removed from the App Store and Google Play—Tencent’s title was the top grossing mobile battle royale game worldwide, ahead of Garena Free Fire from Garena at No. 2, Knives Out from NetEase at No. 3, Fortnite at No. 4, and Call of Duty: Mobile from Activision at No. 5. While the latter isn’t strictly a battle royale title, it does feature such a game mode. Though PUBG Mobile hasn’t met the same fate as Fortnite’s removal, the game was banned in India, its largest market in terms of installs, as of September 2, 2020. The IP owner, PUBG Corp, is currently looking to bring the game back to the stores without Tencent as publisher. 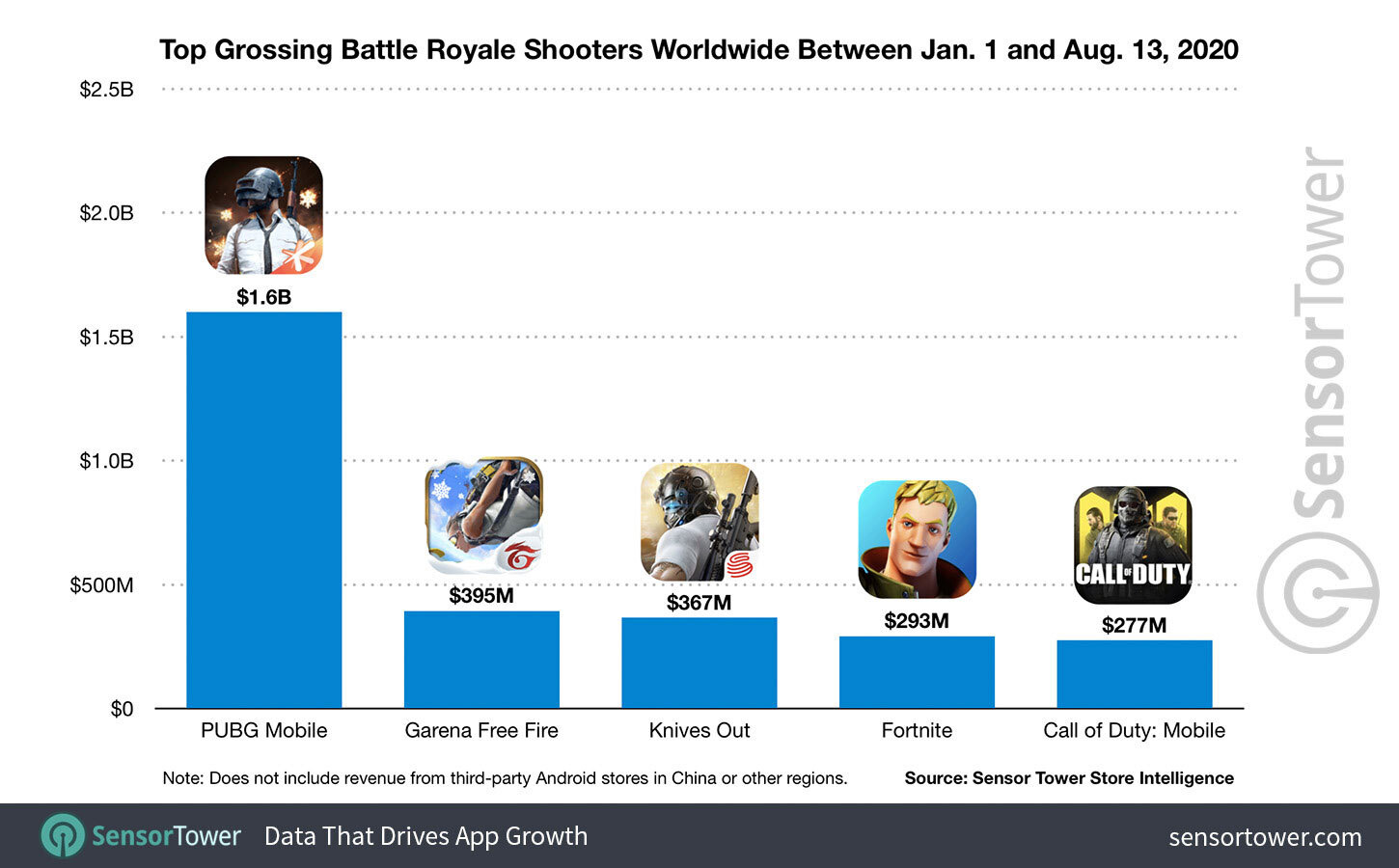 China is the top market for global player spending in its variant of PUBG Mobile, Game For Peace, picking up close to $1.9 billion to date on Apple’s App Store, or 53 percent of total revenue not including third-party Android marketplaces. The United States ranks No. 2 with 13.6 percent of all player spending, while Japan rounds out the top three with 5.5 percent.

The App Store accounts for the majority of player spending globally, generating 80 percent of all revenue. Google Play, meanwhile, makes up 20 percent.

Without the inclusion of China’s Game For Peace in our estimates, PUBG Mobile has generated close to $1.7 billion in lifetime revenue globally outside of the country. The United States ranks No. 1 with almost 29 percent of all revenue, while Japan ranks No. 2 with 12 percent, and Saudi Arabia ranks No. 3 with 8.8 percent. The platform breakdown is closer without the inclusion of Game For Peace, with the App Store accounting for 57 percent of total player spending, and Google Play accounting for 43 percent.

When it comes to downloads, PUBG Mobile has accumulated 770 million downloads in all countries globally to date. India ranks No. 1 with 185.5 million installs, or 24 percent of all downloads. China ranks No. 2 with 16.4 percent, while the United States ranks No. 3 with 6.3 percent.

Google Play accounts for the lion’s share of downloads, racking up 65.3 percent of total global installs. The App Store, meanwhile, accounts for 34.7 percent.

Outside of China, PUBG Mobile has generated 644 million downloads. India ranks No. 1 with 28.8 percent of total installs, with PUBG Mobile Lite accounting for half of downloads in the country. The game is no longer available for download in the country following the government’s ban on the app and others that have links with Chinese publishers. The U.S. ranks No. 2 for downloads, with 7.6 percent of all installs globally outside of China, and Turkey ranks No. 3 with 6.5 percent. Google Play’s share of global downloads increases without the inclusion of China, picking up 78 percent of all installs. The App Store, meanwhile, accounts for 22 percent.

PUBG Mobile, and its counterpart Game For Peace, continue to dominate the global revenue charts as players spend at eye-watering levels. Revenue looks set to continue staying strong, despite a ban in India, where even though the game has attracted an enormous player base, the country only accounts for 1.2 percent of player spending globally. The title has fought off fierce rivals in the mobile battle royale space to be the clear leader in the genre, and has benefitted from global lockdowns during the pandemic, while also maintaining the high levels of player spending throughout the year.