Welcome to the inaugural edition of Sensor Tower's monthly iOS gaming leaders ranking, built using our industry-leading Store Intelligence platform. In this month's installment, you'll learn about the top-ranking gaming apps on Apple's App Store for the month of October 2015 based on download & revenue estimates, along with the month's fastest growing games.

Read on to see how the top gaming apps placed in both the U.S. and internationally, along with our analysis of the movers and shakers.

Top Downloads: Indie Favorite Smashes to the Top in the U.S., Outpaced Worldwide

<Click the charts above to view larger versions. Netherlands-based indie dev Remco Kortenoever must be doing victory laps right about now—his racing title, Smashy Road: Wanted, which debuted in the top 10 for iOS gaming downloads in the United States last month at No. 3, took the top spot in October gaining nearly four million downloads over the previous month. In the process, it outran seasoned genre performer Electronic Arts and its latest Need for Speed title, but only in the U.S. They battled for top spot internationally with EA winning out by nearly 1.5 million downloads.

The casualty of this heated duel for first place seems to have been Jim Bonacci's Happy Wheels, which placed first on the U.S. chart last month after debuting at No. 2 in August, but dropped all the way to No. 10 for October.

Two new titles debuted on the top 10 in the U.S. last month: The Walking Dead: No Man's Land and Minion's Paradise. With The Walking Dead's sixth season in full swing on AMC, not to mention the property's considerable multi-media presence, its strong debut isn't surprising—especially considering the advertising push it received shortly after its October 7 debut, as tracked in our Ad Intelligence platform: 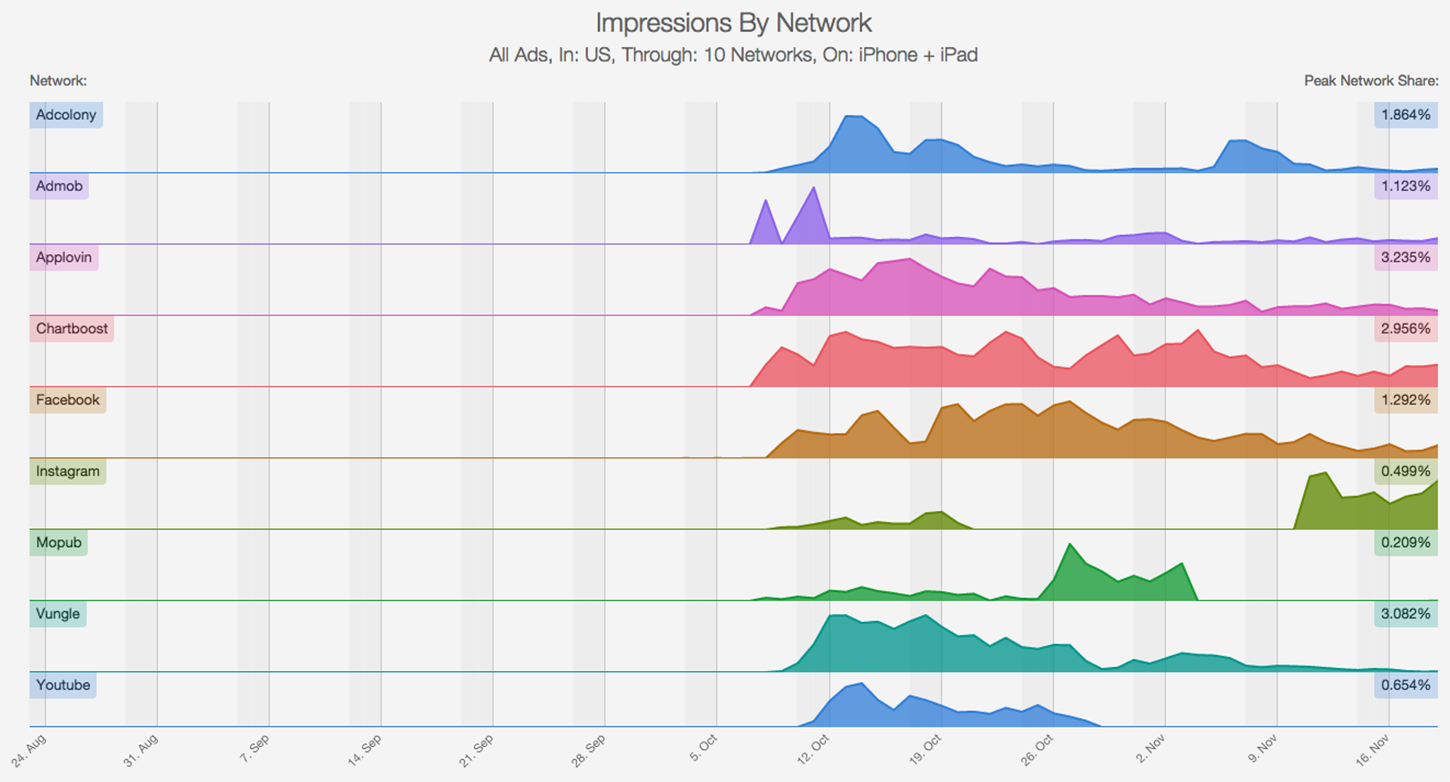 The Walking Dead: No Man's Land was advertised early and substantially across all mobile ad networks we track.

Both the new titles also performed well on the international chart, where they logged seven-figure increases in downloads following their soft launches.

The international ranking also revealed strong debuts for other September launches, including Sky Gamblers Air Supremacy, Sonic Dash 2: Sonic Boom, and Bowling King. The sole October launch to chart in the top 10, Tencent's King of Glory, nevertheless made a splash at more than 2.3 million downloads for the month.

Top Revenue: The Clash for No. 1 Worldwide Produces a New Champion

While the U.S. top revenue chart for games witnessed little in the way of change over September's lineup, things were more active on the international side—and more significant. We're specifically talking about the position swap at No. 1 between far-and-away top grossers Game of War and Clash of Clans. Last month, the former bumped the latter from the global top spot for the first time since its release.

Looking closer, Game of War's nearly $4.2 million increase in revenue on the world stage over September represented a month-over-month growth of 8 percent. Clash of Clans, on the other hand, saw its global revenue decline over September by 1 percent.

No October releases managed to crack either chart, although NetEase's Westward Journey Online Mobile, a portable version of its popular massively multiplayer PC roleplaying game, shot up 10 places over its September ranking to place No. 9 overall on the worldwide chart. COLOPL's White Cat Project didn't rise as much over last month, but did just enough to make the top 10 worldwide.

2K Games topped the U.S. chart of fastest-growing apps for October with its episodic adventure title Tales from the Borderlands, which introduced a free episode in early October to coincide with the finale of the game's first season of content. 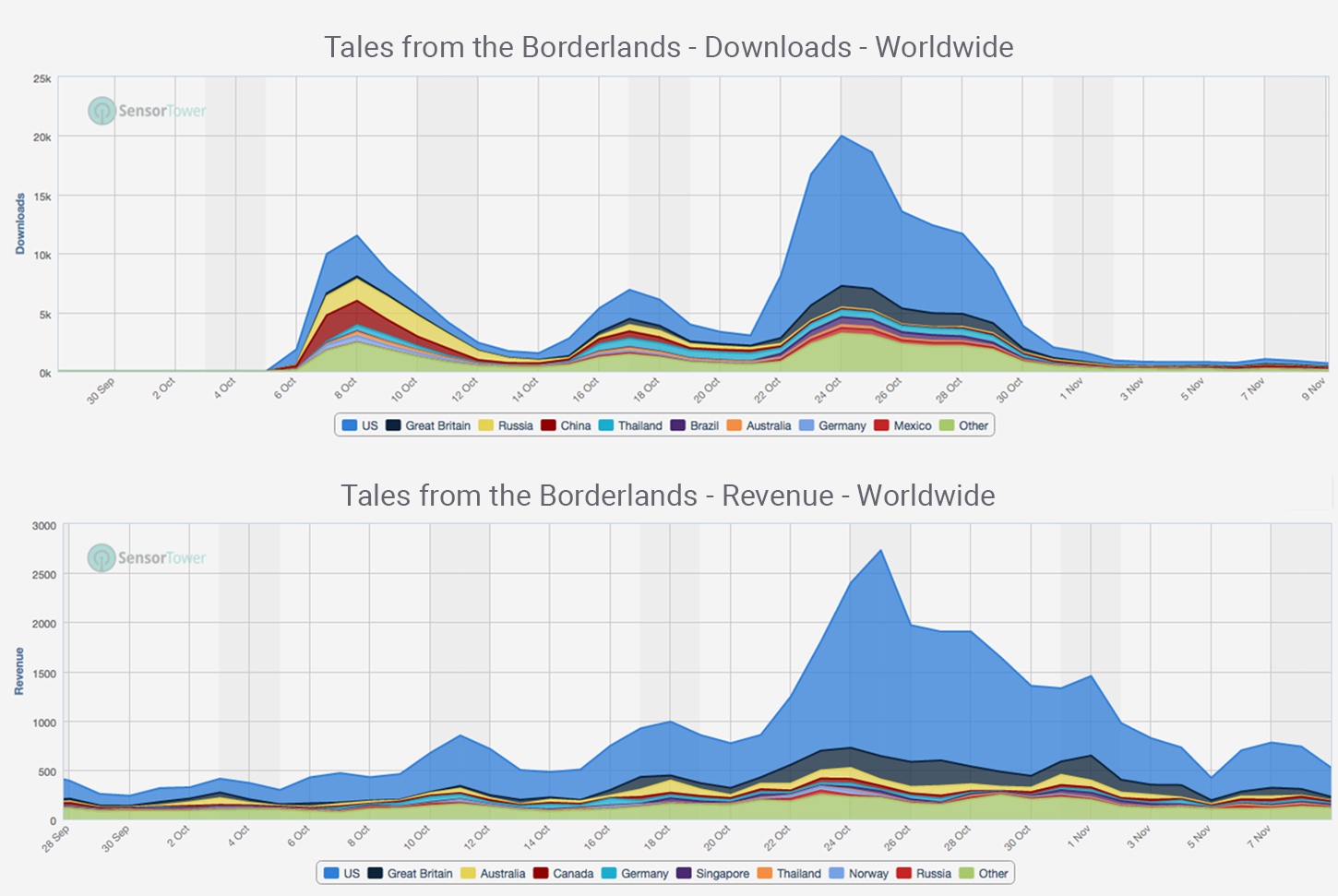 Data from our Store Intelligence platform shows the point at which the IAP went free in the chart above, with most of the download growth occurring in the U.S. At the same time, revenue grew, likely helped by purchases of the aforementioned finale episode IAP.

While it was the second-fastest-growing gaming app in the U.S. during October, Dr. Panda's Mailman won out on the global stage. The app went free for the last two weeks of October, during which period it experienced explosive growth.

Revenue ceased during this period, but upon its return to paid status at the start of November, the app has seen increased revenue. The educational game was also in the top 10 free education apps for both iPhone and iPad for most of its two-week free period.

We've worked to make our inaugural iOS gaming charts as interesting and useful as possible, but there's always room for improvement. What did you like? How would you improve them? Let us know your thoughts by tweeting @SensorTower or emailing randy@sensortower.com.