As seen in previous quarters, the revenue generated on Apple’s marketplace was more than double that of Google Play’s, though it still fell 2.3 percent Y/Y to $21.2 billion from $21.7 billion in the year-ago period. Google Play saw a steeper decline—the store generated approximately $10.4 billion in consumer spending, down 9.6 percent Y/Y from $11.5 billion in 3Q21. 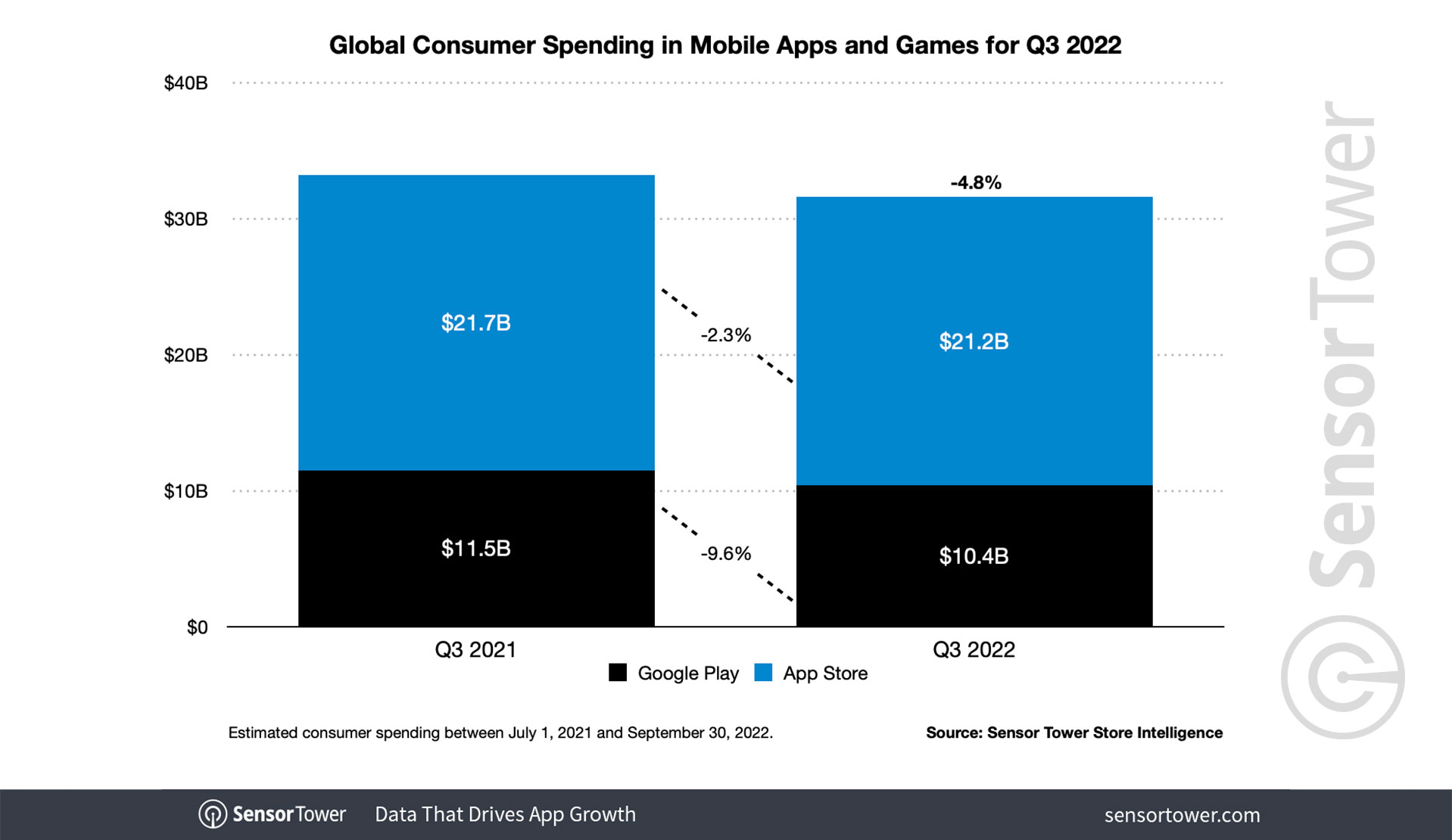 TikTok, including Douyin on iOS in China, continued its reign as the top grossing non-game app worldwide across the App Store and Google Play combined. TikTok saw approximately $914.4 million in consumer spending this quarter, bringing its lifetime total to roughly $6.3 billion. TikTok was the No. 1 revenue-generating non-game app on the App Store, while on Google Play it came second to Google One, which maintained its No. 1 spot with a little more than $330 million.

TikTok also broke another record in Q3 2022 by continuing its streak as the most revenue by any mobile game or non-game app in a quarter for the fourth straight quarter. 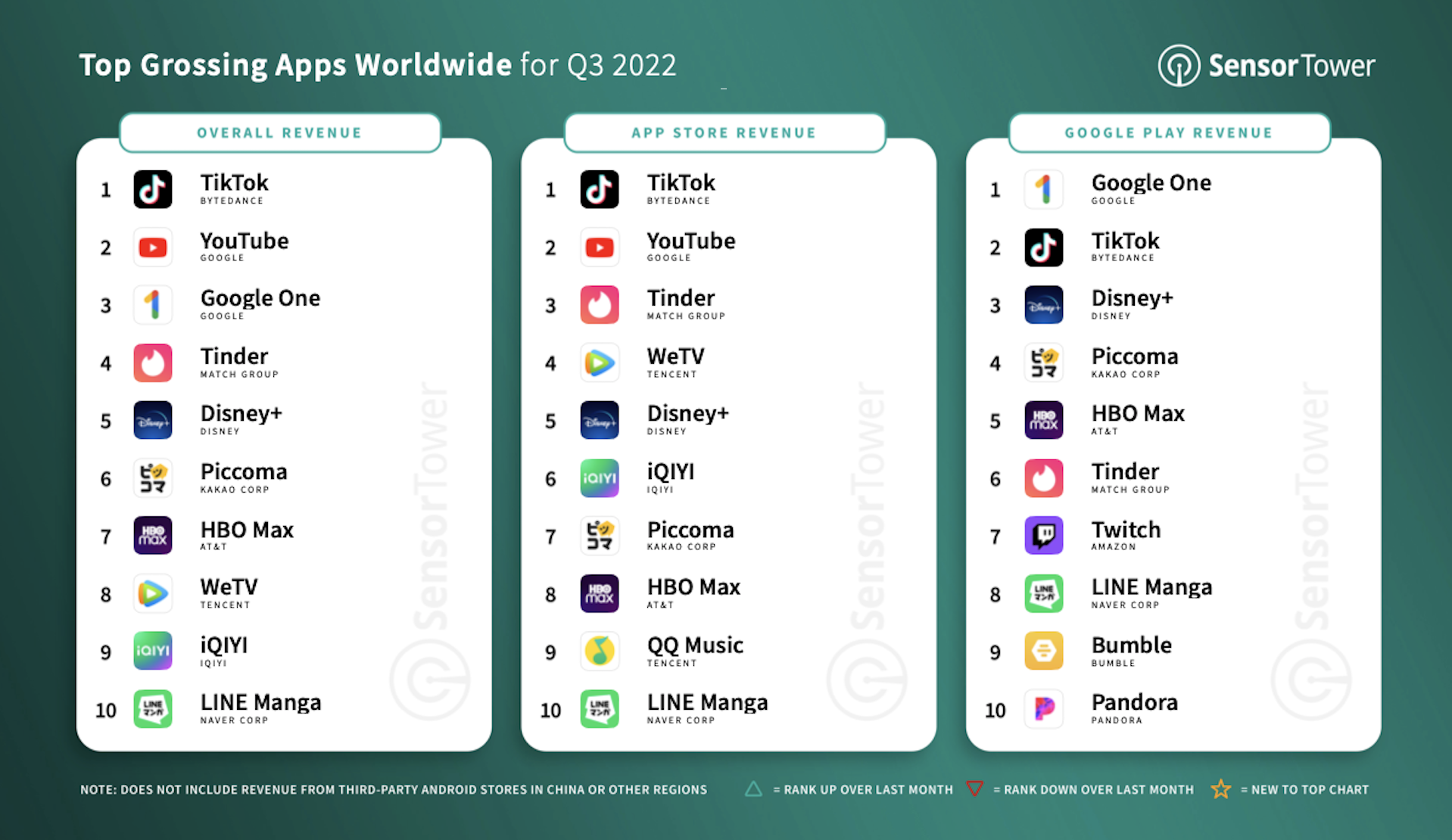 Although first-time downloads didn’t experience the same degree of decline as revenue, they still fell across the App Store and Google Play by nearly 1 percent Y/Y to 35.3 billion in 3Q22. This was driven mainly by Google Play, as Apple’s marketplace saw app adoption climb 3.8 percent Y/Y to 8.2 billion. Meanwhile, Google Play saw first-time installs fall 2.2 percent to a little more than 27 billion. 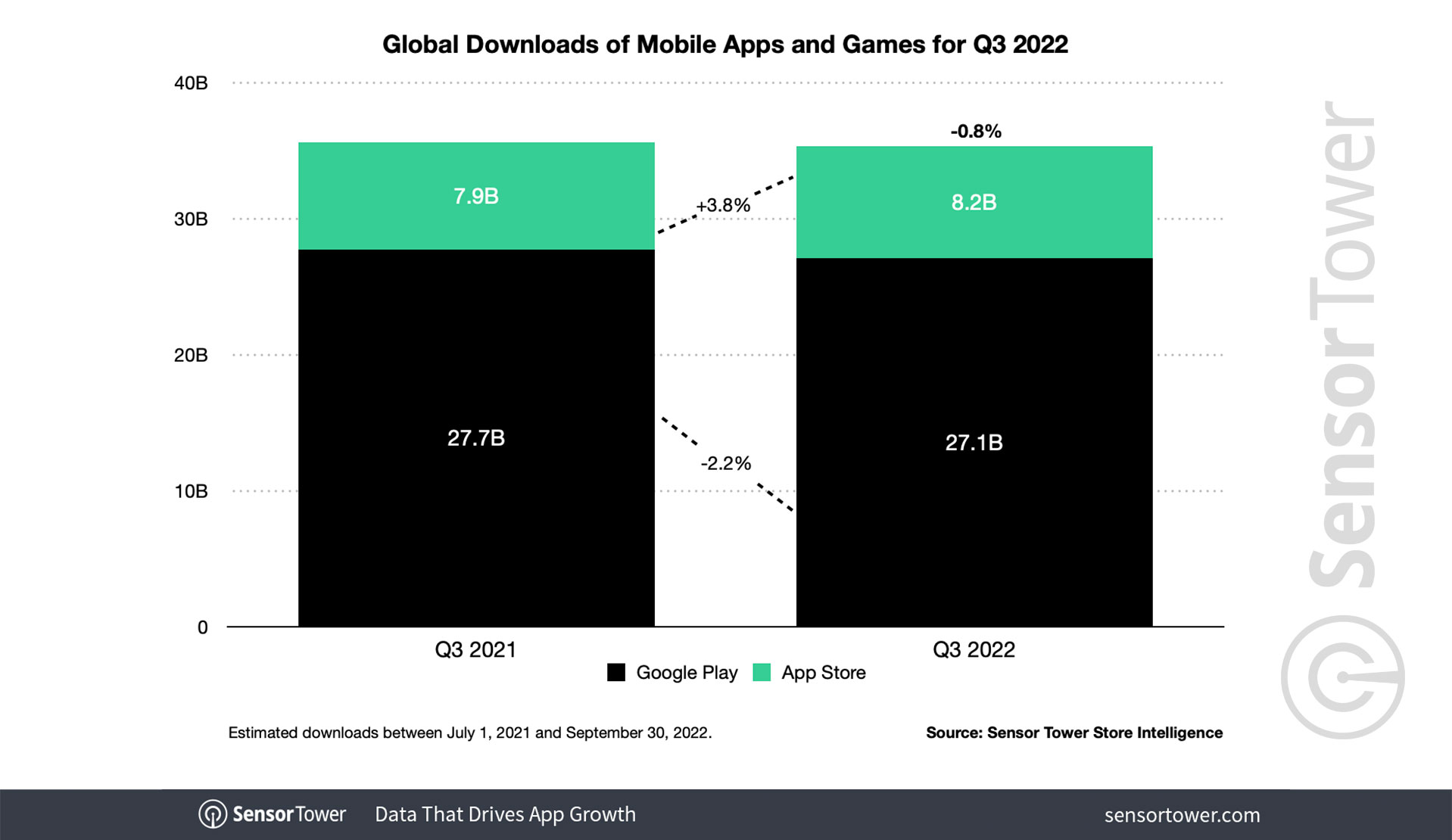 TikTok was once again the most downloaded non-game app across both marketplaces, reaching approximately 196.5 million installs in 3Q22. In the first half of 2022, Instagram was No. 1 by downloads on Google Play, but it traded that spot to fellow Meta app Facebook in 3Q22, which saw approximately 150.3 million first-time installs on the Android marketplace. 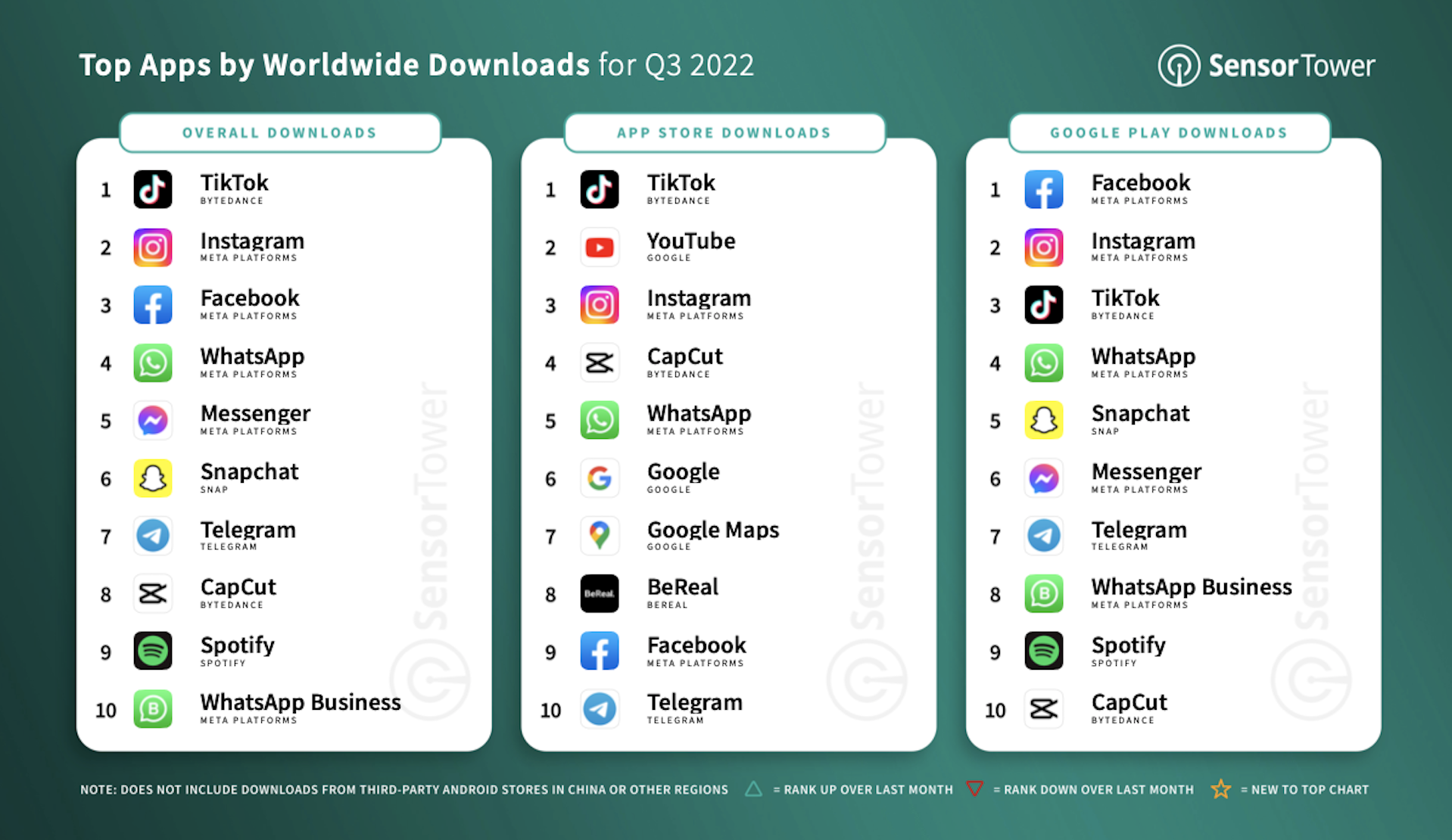 Consumer spending in mobile games declined even more steeply than non-game apps, with revenue for the category falling 12.7 percent Y/Y to $19.3 billion in the third quarter. Both the App Store and Google Play saw less revenue when compared to the year-ago period, with mobile game spending on Apple’s platform falling 9.8 percent Y/Y to $11.9 billion and Google’s marketplace seeing $7.4 billion, down 16.9 percent Y/Y. 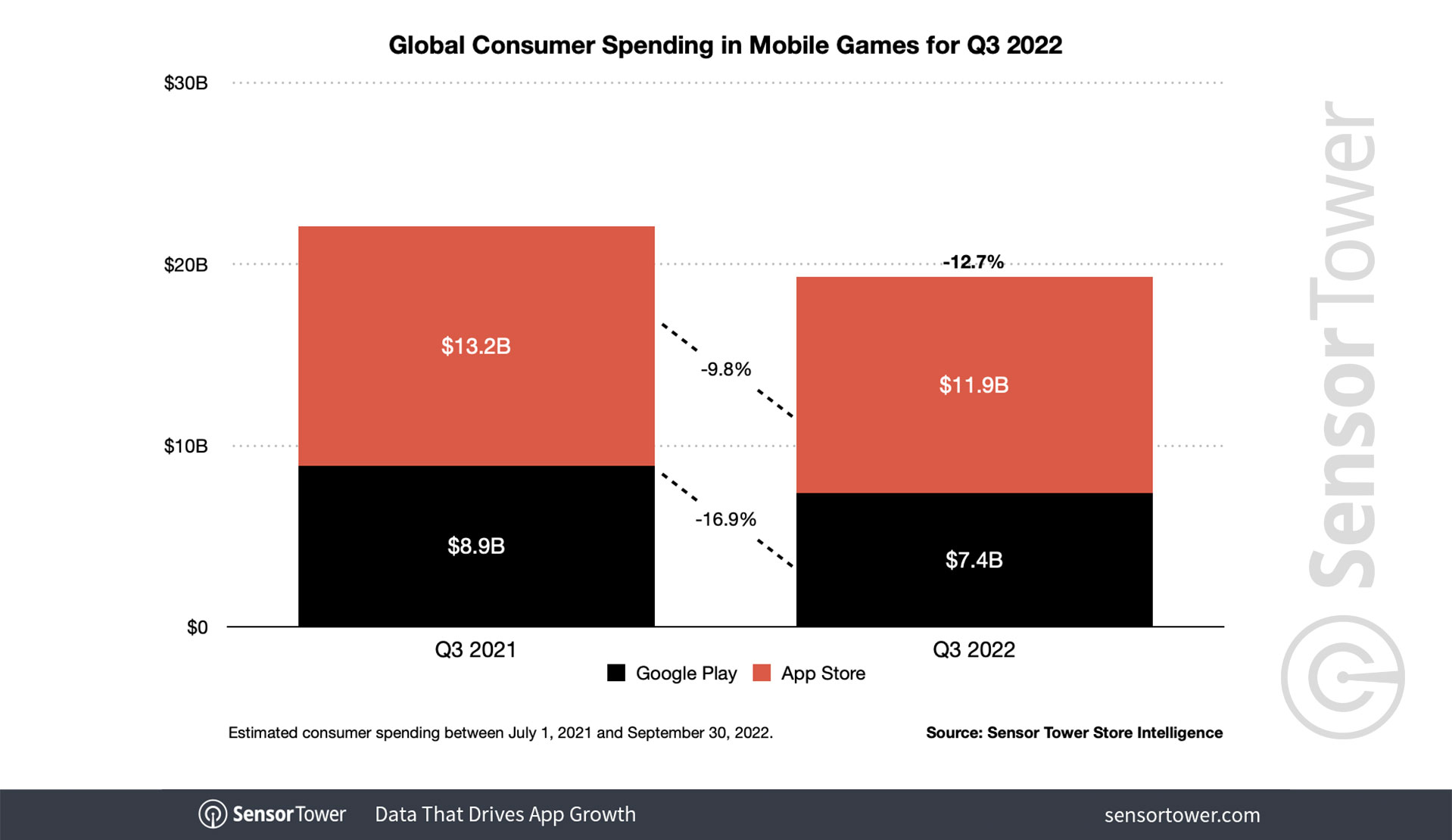 As seen in H1 2022, the top three highest grossing mobile games overall were Tencent’s Honor of Kings and PUBG Mobile—including its Chinese localization Game for Peace—and miHoYo’s Genshin Impact. Honor of Kings, the No. 1 title, saw approximately $639.3 million, while No. 2 PUBG Mobile and No. 3 Genshin Impact saw $450.6 million and $369.7 million, respectively. These titles also ranked as the top three grossing games on the App Store.

On Google Play, Moon Active’s Coin Master traded places with NCSoft’s Lineage M, taking the No. 1 spot as the store’s top earner, followed by Lineage M at No. 2, and then King’s Candy Crush Saga at No. 3. 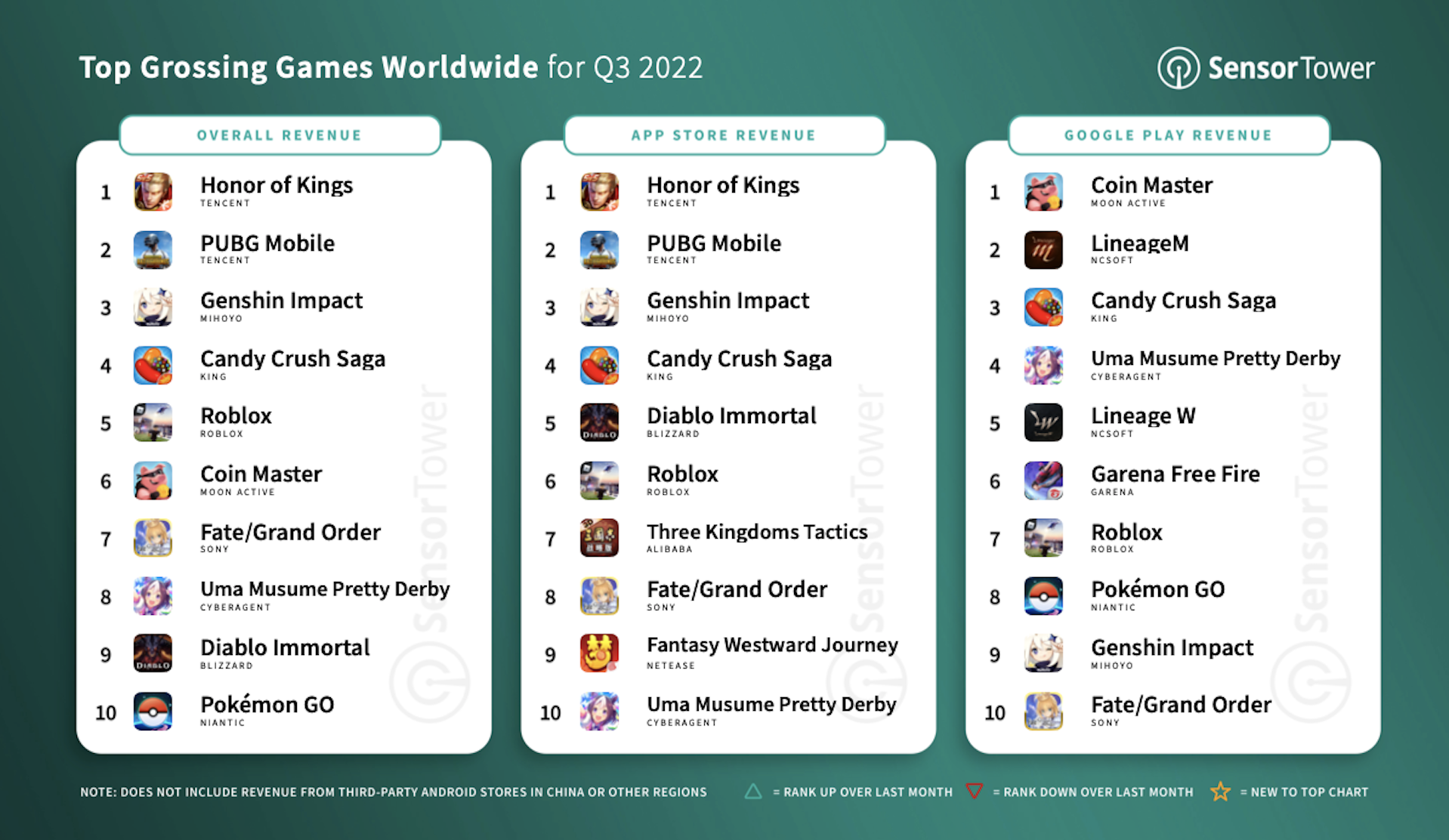 Worldwide downloads of mobile games remained flat in 3Q22 at 13.7 billion. This was true across both the App Store and Google Play, which saw 2.1 billion and 11.6 billion installs, respectively. 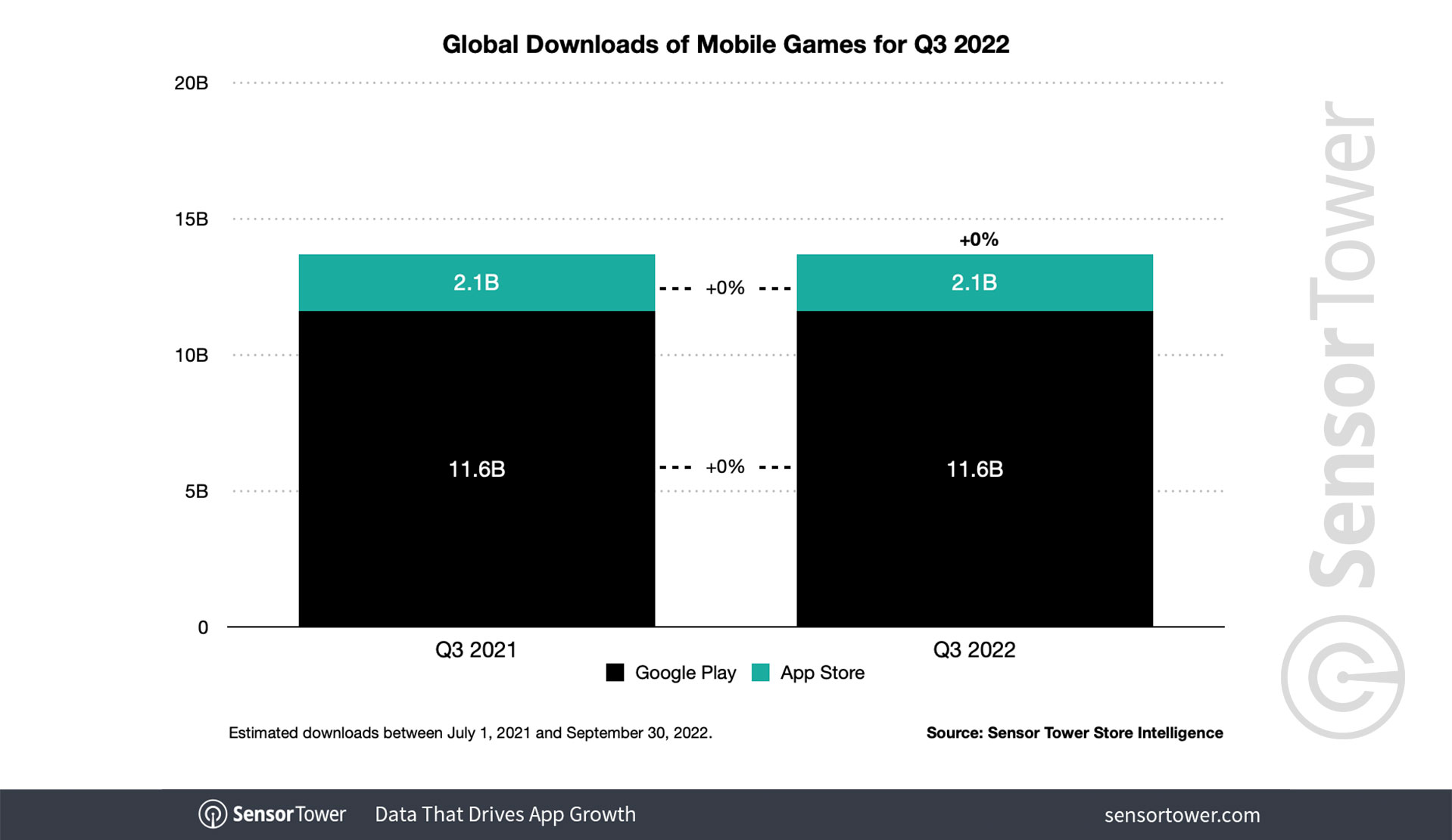 Miniclip’s Sybo Games’ Subway Surfers topped the App Store rankings, as well as overall as the most downloaded game, garnering approximately 86.2 million installs in 3Q22. It was followed by Kitka Games’ Stumble Guys in second with 77 million, and Garena’s popular battle royale title Garena Free Fire in third with 62.3 million.

Although Garena Free Fire was third overall, on Google’s marketplace, it was the top downloaded game with 56.7 million first-time installs. 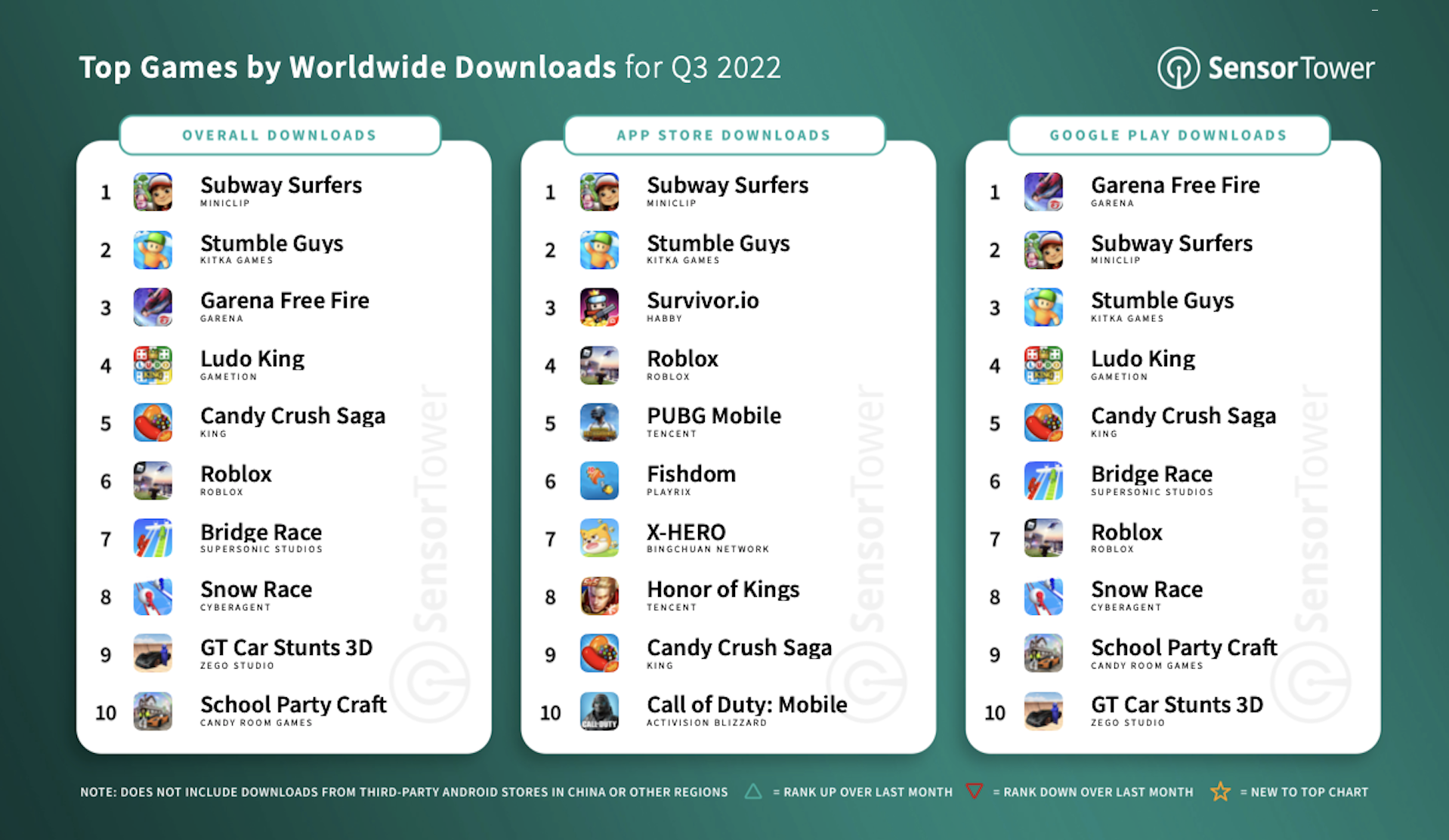 In the first half of 2022, spending was only up by approximately 1 percent Y/Y following the explosive growth seen by both stores in 2021. The pressure has only increased on the mobile market due to economic headwinds and shifts in privacy policies, and these challenges look set to persist as we head into the end of the year.

Our in-depth analysis of the mobile app ecosystem and its continuing trends in 3Q22 will come soon, including additional insights into 2022's top apps, games, and publishers.