Following yearly trends, first-time U.S. and worldwide iOS game installs were down last month compared to March, but were up year-over-year for the month compared to April 2015. According to Sensor Tower's Store Intelligence platform, worldwide App Store game downloads grew 16.6 percent in April over the same month last year, from 502 million to 585 million. In the U.S., they grew at a slightly lower rate of 14.2 percent over the same period.

In this report on the mobile gaming category, we'll chart this growth as well as rank the top mobile games of April 2016 on the U.S. App Store, Google Play Store, and the two platforms combined. Read on for the data and analysis.

The following charts were created using U.S. and worldwide daily download estimates generated by Sensor Tower's Store Intelligence platform for the period of April 1 through April 30, 2016. For Android downloads, only estimated installs from the Google Play Store were counted. Sensor Tower does not provide download estimates for third-party Android stores. 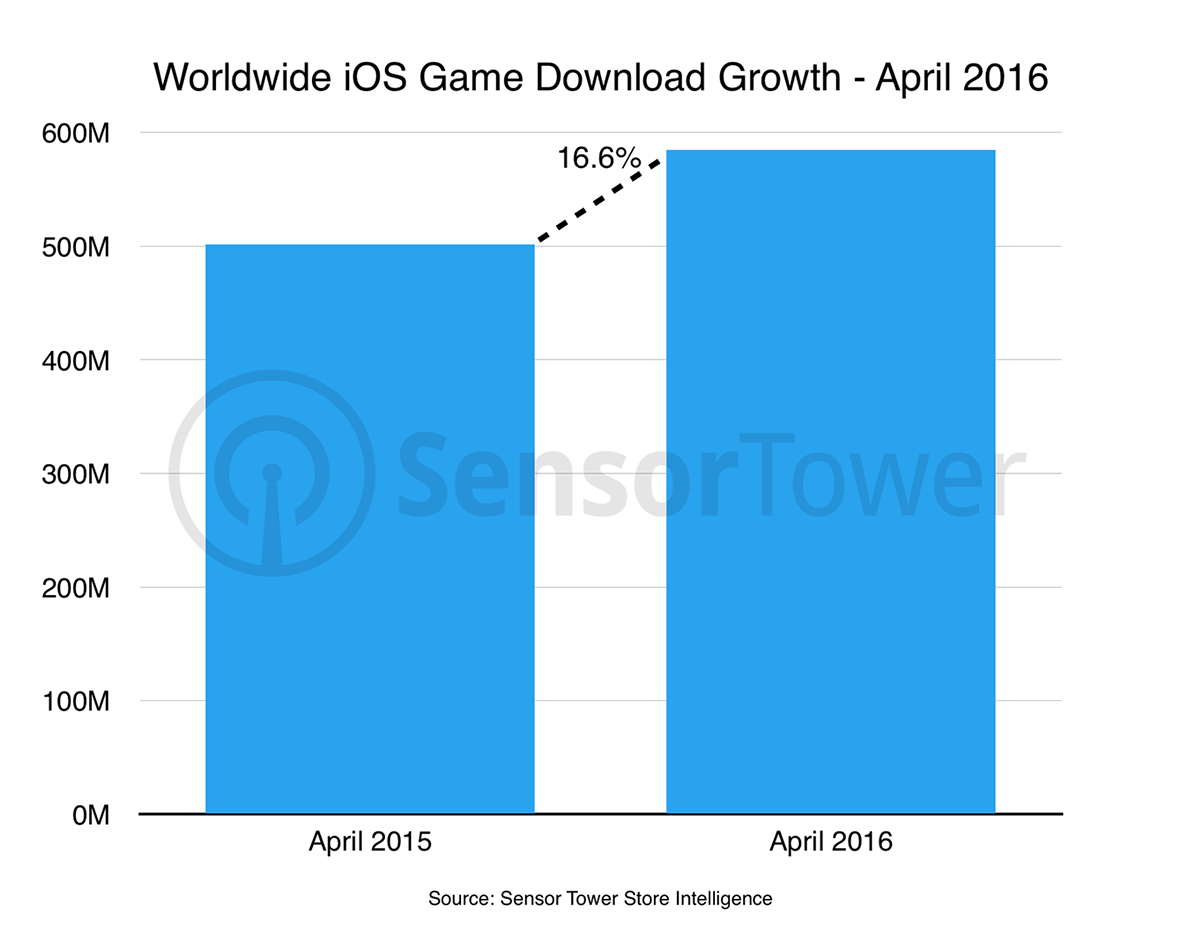 The chart above visualizes year-over-year worldwide App Store download growth for the Games category in April. In this case, they grew 16.6 percent versus April 2015. 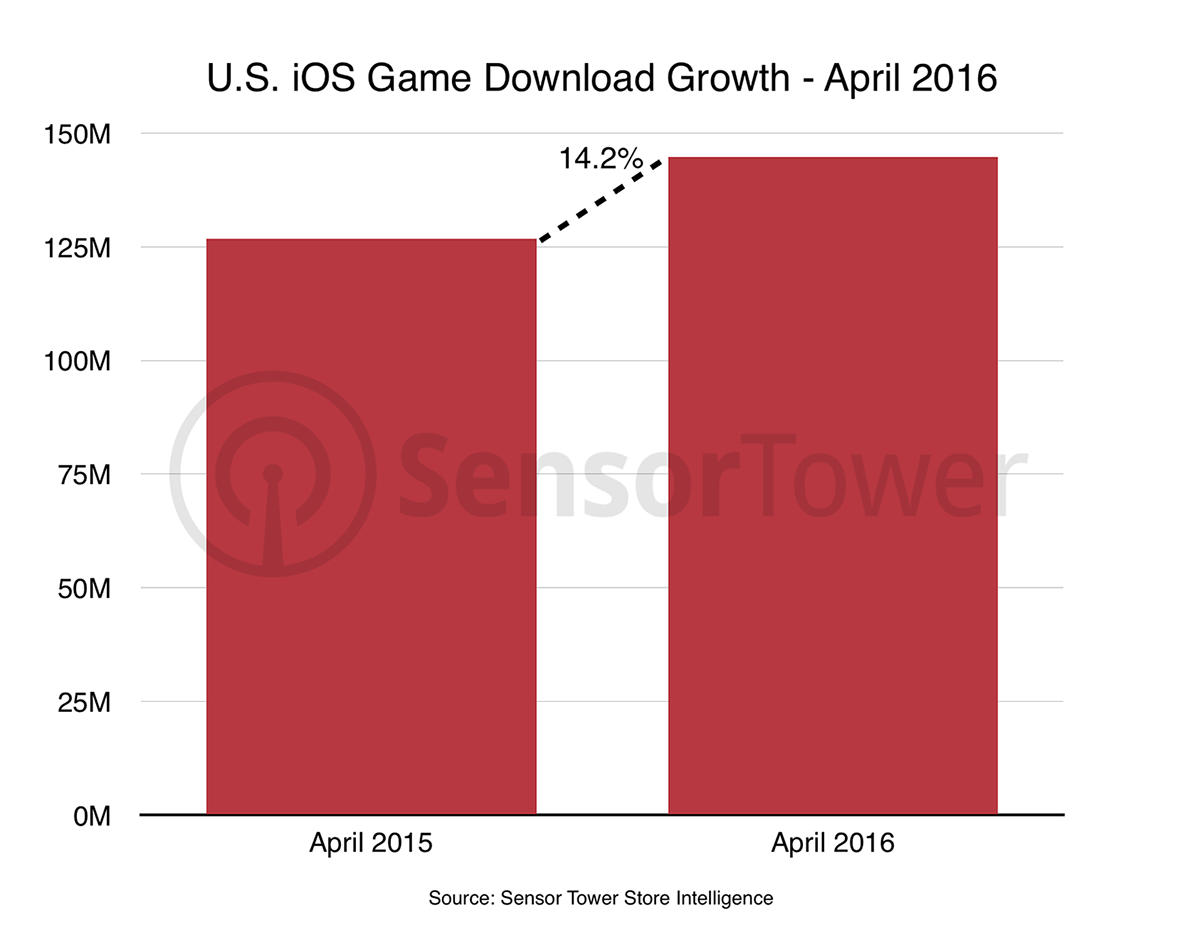 By comparison, April's year-over-year Games category download growth for the U.S. App Store was 14.2 percent, as you can see in the chart above.

You've probably heard the phrase "runaway success". Well, last month saw what we'd call a "slither away success" in the form of indie developer Steve Howse's web-game-turned-mobile hit slither.io, a massively multiplayer title about gobbling up dots as an ever-growing snake/worm/slithering creature. Whatever the player's in-game avatar is supposed to be (the snake vs. worm debate continues), there's no debating that with more than eight million installs across the App Store and Google Play, Mr. Howse's creation was (and still is, as of this writing) a hit. The title's low barrier of entry and carefree gameplay set it up as an ideal idle time waster, and its leaderboard-based competitive multiplayer encourages one-upmanship.

Speaking of hits, Disney had its latest last month across both mobile platforms with the launch of Disney Crossy Road. Produced in collaboration with Hipster Whale, creator of the immensely popular Crossy Road franchise, the title—which fuses Disney characters and film settings with the endless isometric hopping the series is known for—drove more than 3.6 million new installs across the App Store and Google Play in the United States, placing it at No. 2 on our ranking.

Another of last month's big new releases making our top 10 for both platforms was also Disney-related. Kingdom Hearts Unchained χ, a mobile experience based on Square Enix's popular console and handheld Kingdom Hearts games, propelled the publisher onto the most-downloaded chart with its combination of Disney characters and action RPG gameplay.

Bringing a popular IP from console and handhelds to mobile was also the theme for Nintendo, which made its App Store and Google Play debut with Miitomo, a game/social network hybrid featuring the company's stylized Mii avatars. The free-to-play title ended up placing No. 4 overall for the month following a tremendous launch period.

On the U.S. App Store, we saw a largely similar slate of gaming apps make the topmost ranks when compared to the unified ranking. With most of its downloads originating from iOS, slither.io again ranked No. 1, with more than 5.5 million installs to its credit on the platform. Disney Crossy Road was No. 2 here as well, while Miitomo moved up to No. 3 on Apple's mobile OS.

The standout difference on the App Store ranking was Rovio's now-classic Angry Birds 2. In the lead-up to this month's premiere of the Angry Birds feature film, Rovio was one of many publishers who partnered with Apple to introduce exclusive content and theming for the App Store's "Apps for Earth" campaign. Rovio donated 100 percent of proceeds from a special World Wildlife Fund in-app purchase to the preservation organization, and the app received featuring from Apple as part of the promotion.

Amassing nearly three million downloads, slither.io was also a No. 1 hit on Google Play in the U.S. last month. Color Switch from Fortafy Games managed to hold off Disney Crossy Road and remain in its No. 2 position from March, a testament to its simple yet addictive gameplay and persisting word-of-mouth popularity.

Android gamers also flocked to Miitomo last month, and the platform remained the strongest for King's most recent free-to-play puzzler, Candy Crush Jelly Saga. Overall, more of the Google Play top 10 games saw their positions decline over March (six, versus four on iOS), but the platform had one fewer new release make its highest-ranking games list.

Next time, we'll see if slither.io can retain its spot at the top of all three charts, and if Glu's just-launched Britney Spears: American Dream can replicate the successful February debut of its last celebri-game, Kendall and Kylie.

In the meantime, if you're an iOS or Android developer and want to see your own app's ranking history, you can do so in our App Intelligence product. Let us know what you think of these reports by tweeting @SensorTower or emailing randy@sensortower.com.